More than 150 African asylum seekers who deserted from an ‘open prison’ facility reach Jerusalem and are joined by supporters in a first-of-its-kind protest. Police and immigration authorities arrest them all and put them on buses back to prison. 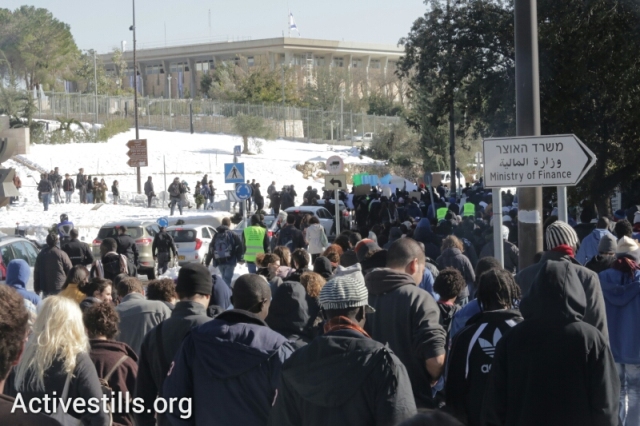 Update (4:15 p.m.): Police and immigration authorities detained all of the Sudanese and Eritrean asylum seekers who left the ‘Holot’ open prison on Sunday and marched to Jerusalem. The detainees were put on buses and driven away.

After deserting from a so called ‘open prison‘ facility in large numbers, refusing meals for two days and marching almost non-stop for another two, a group of 150 Sudanese asylum seekers reached the Prime Minister’s Office and then the Knesset in snowy Jerusalem Tuesday morning.

The asylum seekers spent the night at Kibbutz Nahshon, having been taken in by kibbutz members and in the morning proceeded by buses to Jerusalem, accompanied by dozens of Israeli activists and a large number of police and immigration inspectors.

Upon reaching Jerusalem they were joined by several dozen other Sudanese and Eritrean asylum seekers who also left the facility for to Be’er Sheva earlier in the week and took buses directly to Jerusalem. An unknown number of other detainees from the new “open facility” are reportedly roaming the Negev individually, not taking part in the “March for Freedom” protest but looking for ways to survive outside prison. Haaretz reports that some have reached Tel Aviv and have been arrested by authorities. 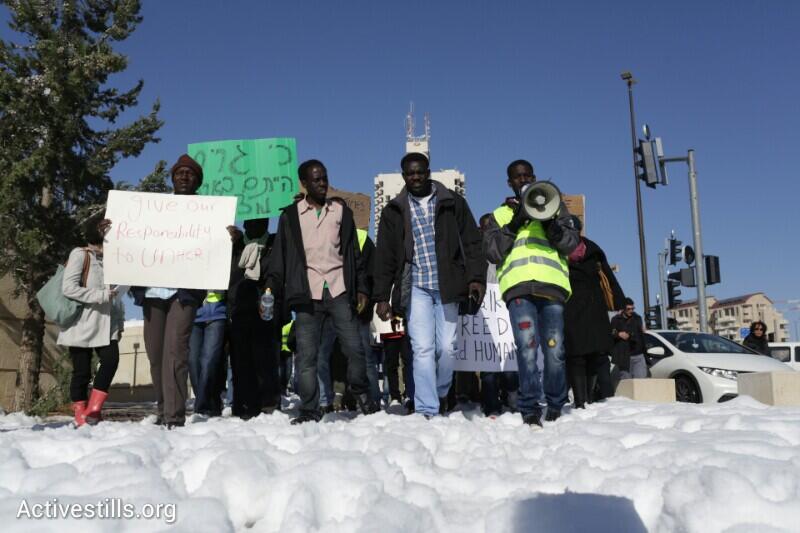 Asylum seekers reach Jerusalem after deserting from an ‘open prison’ facility in the Negev and marching to demand their freedom, December 17, 2013. (Photo: Activestills.org)

The demonstrators were also joined by Israeli activists from NGOs supporting refugee rights, a public housing collective in Jerusalem and residents of the unrecognized Bedouin village of al-Araqib. Together they have been calling for an end to the policy of jailing asylum seekers and denying them work permits, demanding freedom and human rights.

Demonstrators were also calling on the government to investment funds not in policing and detention facilities, but in a proper refugee status determination process and in supporting both the asylum seekers themselves and the Israeli poor neighborhoods in which they live. Residents of those communities have for several years been complaining about the hardships caused by the newcomers in their already impoverished communities. 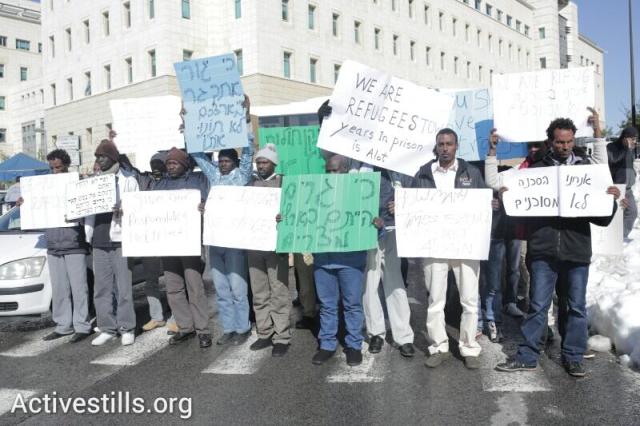 Demonstrating nearby the PM residence in Jerusalem (Activestills)

Police and immigration forces have threatened that they will begin arresting demonstrators as of 12 noon. According to the new amendment to the”Anti-Infiltration Law,” passed only last week and already challenged by an NGO appeal to the High Court of Justice, asylum seekers who do not report back to the “open facility” after 48 hours an be apprehended and imprisoned for three months.

Repeat offenders can be imprisoned for up to one year. Some of the the asylum seekers who left the facility have been telling journalists that they have already spent two years in prison (under the previous version of the law that was overturned by the court), saying they will not go back willingly. They say they are determined to continue with their civil disobedience until their rights are recognized.

So far (1:30 p.m.) arrests have not been made, and the March of Freedom has moved on from the Prime Minister’s Office to the Knesset. Demonstrators estimate the protest will continue for several more hours.

UPDATE (3:15 p.m.): Immigration authorities have reportedly ordered asylum seekers to board busses back that will take them to prison. Those refusing are being taken by police and immigration officers.