After the Central Elections Committee banned a civil society group from busing Bedouin voters to the polls, dozens of Israelis are stepping in to ensure all citizens have a chance to participate in the elections. 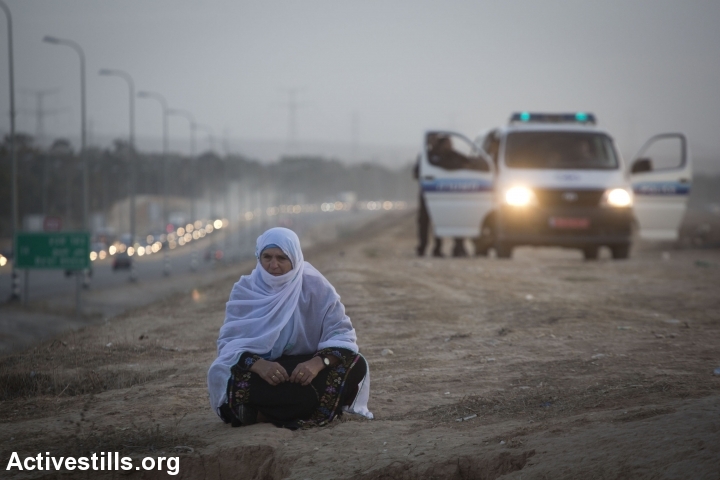 Dozens of private citizens have volunteered to drive Bedouin residents of remote, so-called unrecognized Bedouin villages to the polling stations to vote during Tuesday’s election. The grassroots initiative sprang up in response to a ruling handed down on Sunday by the Central Elections Committee, which ordered Zazim, an Israeli grassroots organizing group akin to MoveOn, to halt its plan to bus Bedouin voters to polling stations. Likud party lawyers objected to the plan, arguing to the Committee that it was a partisan attempt to sway the election results.

The volunteer drivers said that they are not connected to any organization.

Approximately 50,000 eligible voters live in remote, unrecognized Bedouin villages that have no access to public transportation. Many of them live miles from the nearest polling station.

A hotline to prevent voter intimidation

Netanyahu’s anti-Arab rabble-rousing has led to concerns that his supporters will attempt to intimidate voters at polling booths in Arab communities within Israel. Accordingly, several civil society groups have planned Election Day initiatives to ensure that voting goes smoothly and with maximum transparency.

Zazim will run an Election Day hotline with Arabic-speaking volunteers on the phone to take reports of voter intimidation attempts. Attorneys with Adalah — the Legal Center for Arab Minority Rights in Israel will provide legal advice to hotline callers, while additional volunteers will coordinate the reports in a situation room and issue immediate responses.

A Zazim spokesperson said the organization was concerned about attempts to disrupt the election in light of voter intimidation attempts last April, with news outlets reporting on Election Day that Likud-aligned polling station staffers in Arab towns had been caught wearing hidden cameras. As a result of those reports, Arab voter turnout was the lowest in decades.

Recently, new reports emerged that polling booth staffers might try to impose a body search on veiled women, using security concerns as an excuse. This would surely result in many Arab-Muslim women choosing not to vote, rather than being forced to remove their headscarves in a public place.

Raluka Ganea, the executive director and co-founder of Zazim, added: “On Election Day we will stand in solidarity against attempts to suppress the Arab vote. The hotline is one way for our activists to further the goal of equality — both inside the polling station and out.”

Getting out the vote

Another initiative established in the run-up to these elections is the September 17 Coalition, which seeks to encourage Palestinian citizens of Israel to vote. Dozens of activists will fan out in the Arab towns and villages that saw the steepest decline in voter turnout last April. Sawsan Sweid, one of the founders of the initiative, said that volunteers will stand outside the polling stations encouraging citizens to vote “until the last minute.” Additional volunteers will staff a call center in Haifa, phoning Arab citizens to get out the vote.

The local councils in nine Arab communities plan to hold “public polls” outside the polling stations on Election Day, with municipal leaders asking residents to voice their positions on important issues like public security, sanitation, and infrastructure, under the umbrella of “citizens exert influence.” Participating communities include Tamra and Umm al-Fahm in the north and Rahat in the south.

The mainstream Zionist political parties are also concerned about Election Day disturbances. Labor-Gesher announced last week that they would send volunteers who were veterans of army combat units to protect Arab voters. The plan was shelved after Netanyahu failed in his attempt to get legislation passed that would allow camera surveillance in polling stations.

Gavri Bargil, who represents the kibbutz movement and is number 12 on the Labor-Gesher list, explained: “We don’t want to inflame the situation. If Likud activists are not going to be using hidden cameras to record and intimidate voters, we don’t need to be at the polling stations.” Bargil said that a small group of volunteers were ready to be deployed in case activists from other parties tried to disrupt the election via voter intimidation.

The Joint List plans to increase its presence in Arab communities, with party committee members standing at polling stations and greeting people on the streets in villages and towns. “We want to make sure things stay peaceful, that people go out and vote, and that no one responds to provocations, because that will undermine voter turnout,” said Fadi Abu Younes, chief of staff of the Arab-Jewish Hadash party.

The liberal-left Democratic Union party, which saw some of its activists violently attacked by far-right supporters at Jerusalem’s Mahane Yehuda Market last week, issued a call to be prepared for violence on Election Day. According to a party spokesperson, they have received intelligence about planned provocations from right-wing activists at polling stations.