In Be’er Sheva, there are two kinds of people: those who sit protected in their shelters, calling for the occupation of Gaza, and the thousands of people who, living in buildings that crumble around them and with nowhere to run, just wait for the end. I live in such a building. Conversations with residents who have no refuge from the rockets.

By Daniel Beller (translated from Hebrew by Noam Shemtov) 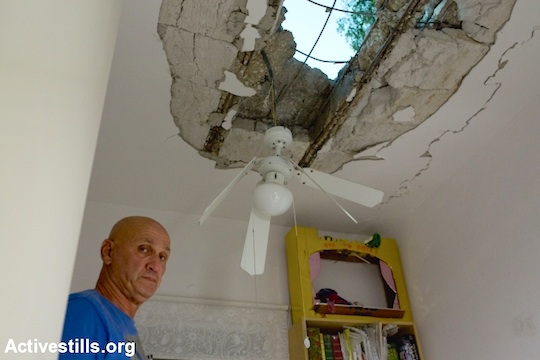 An Israeli looks at damage to his home in a kibbutz near border with the Gaza Strip on Wednesday, July 9, 2014. (Photo by Yotam Ronen/Activestills.org)

The city of Be’er Sheva on Friday night got a reminder of why it needs a little less pride and lot more protection, especially for the weak: a rocket hit a house in a neighborhood of olim —Jewish immigrants to Israel — and almost completely destroyed it. Miraculously, the 80-year-old woman who was sitting in the living room at the time emerged from the building with only moderate injuries.

Many houses in Be’er Sheva are unprotected and it is no coincidence that these are precisely the buildings that Be’er Sheva’s sizable socioeconomically weaker population calls home. They are older housing units, neglected blocks of concrete built 50 or 60 years ago that are not part of the so-called, “new, high-end Be’er Sheva.”

When the alarm sounds, this community of underserved residents has nowhere to run. Its members take refuge standing against plaster walls, lying behind the couch or in the middle of the living room, standing and praying. These are people who make their livings from odd jobs, and a week of fighting – no work – could bring financial ruin upon them. If people don’t leave the house and give them a bit of business at a marketplace stall or kiosk, or if they hold only a part-time job because the city’s economy is forever stopping and starting up again — then they have no savings to speak of.

One of the most outrageous things about Be’er Sheva is to hear local politicians talking in front of microphones about the city’s fortitude, about its “strength,” its “solid front” and its people, “who unequivocally support the IDF’s strikes against Gaza.” Words spoken more easily from the refuge of a bomb shelter than in the dread of an open stairwell. 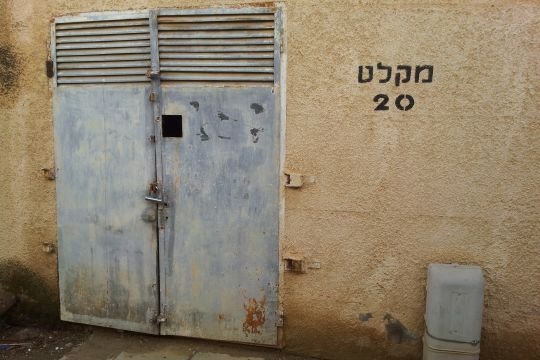 Now that the IAF has already bombarded Gaza with 900 tons of explosives, destroyed Hamas’s infrastructure and caused dozens of civilian deaths in Gaza — the system is stuck. When a drug becomes ineffective, a sufficient increase in dosage will render it toxic. So too with war. In its current stage, the war has become toxic to both sides. On the one hand, arguably the world’s most powerful and sophisticated military with its Iron Dome technology is wreaking destruction over Gaza. The Iron Dome system saves Gazan lives as well as Israeli ones: one miss, one fallen rocket, and the picture changes completely. Even God’s arsenal of miracles is limited.

Israel is liable to find itself in the current situation, a war of attrition, for many weeks to come. On both sides sit politicians, not statesmen. They train their vision on the immediate, on electoral gains— damn the future generations. The residents of the periphery are the ones who live in between Netanyahu’s office and Haniyeh’s bunker. And on the other hand are Gazan citizens. Residents of the periphery have been paying the price for the Israeli government’s neglect for years. But even this weakened population, hearing rockets roar from the crumbling stairwell, cannot begin to imagine the hell that befalls Gazans. In Israel the war’s casualties comprise people who have been hurt, isolated cases of serious injury, people half-dead and an elderly woman who stumbled down the stairs. In Gaza, the threat is more fundamental: as of Sunday morning, the death toll has soared past 160 lives.

Judging by social media, in Be’er Sheva, opinions fall into either of two categories.

First there are those who publish testosterone-laden statuses supporting the occupation of Gaza from the safety of bomb-shelters, messages accompanied by photos of Zionist imagery of tanks, soldiers or proudly waving Israeli flags. This is the same group that divides its worldview between righteous “patriots,” “leftist traitors” and “the media.” The members of this group are taken care of. They sit out the rockets in the comfort of a bomb shelter, have a basic reserve in their bank accounts, and they have the right connections in the more comfortable parts of the city.

Then there are the rest, the thousands of other Be’er Sheva residents who do not have access to social media. This group is cautious not to be excessively controversial, not to cause unnecessary trouble. They reveal little and ask less in a city with insubstantial income opportunities and where the local authorities have absolute power. Those who live in Be’er Sheva’s older neighborhoods — in decades-old buildings likely to collapse at any moment — well, they run to the stairwell. They run because that’s what they were told to do. But these staircases stand open, brittle and falling to pieces, a common sight in the neglected development towns.

I live in such a building. When an alarm sounds, a pair of elderly neighbors who can hardly walk hobbles to the stairs. A family with four small children comes, too. From another apartment tumbles a large family of immigrants from India: the grandparents, the son, his bride and their baby. On the upper levels, some apartments have been divided into two units; one poor family resides in each. The crowding is unbearable, impossible.

Large families crammed into small apartments, each struck with financial hardship: it is a circumstance explosive in the most literal sense. Add to that the state of war, in which the Negev’s capital city has been immersed since December of 2008. The result, needless to say, is disaster.

Be’er Sheva’s residents have become accustomed to the fact that their routine includes, in addition to the quotidian hardships of a neglected class, an unyielding existential threat. In the early days of Operation Cast Lead in the Be’er Sheva Municipality’s bomb shelter, I asked a senior official why the city doesn’t bother to reinforce those old buildings, which are state subsidized. It seemed a comparatively cheap and easy solution. The municipality, then in the early days of Ruvik Danilovich’s mayoral tenure, did not like the question, and passed it off with the same macho buzzwords about Be’er Sheva being a “staunch front.”

“Over 50,000 residents of Be’er Sheva live in buildings with no reinforced room or bomb shelters, buildings with asbestos-ridden roofs and flimsy cardboard walls, old apartments without protection,” says Miri Alush, daughter of the late Victor Alush, one of the founders of the Israeli Black Panthers. “When an alarm sounds and the rockets begin to fall, all the residents of these poor neighborhoods can do is pray to god until, anxiously, they hear a boom, often a boom boom.”

Miri Alush knows these neighborhoods all too well. She volunteers here, often independently, during the difficult times.

“It is mostly about the elderly, the disabled, residents of the ‘Amidar’ (a state’s public housing company) and the weak,” she says. “This is a public that feels neglected by their city and by the state, which isn’t counted or taken into consideration during wartime. As if they are being sacrificed in some divine violence and bloodshed. This public is neglected always, especially in wartime, as if they are being told to “deal with it: we [the city and state] don’t care if you die— if you are injured.”

She continues: “I think before we go to war we would be well advised to provide collective reinforced shelters, and in times of peace we must help Be’er Sheva’s disadvantaged residents fortify themselves as part of the urban renewal project, as was done in Sderot and in what is now Gaza. This same farce repeats itself every year or two with each new round of combat. We should treat Be’er Sheva’s underserved communities the same way other such weaker populations are treated in the world when there are natural disasters. Only that war is not a natural disaster. It is a planned action. It is tactical. Therefore, we must take this public into account instead of treating it as if we were in Sodom and Gomorrah.