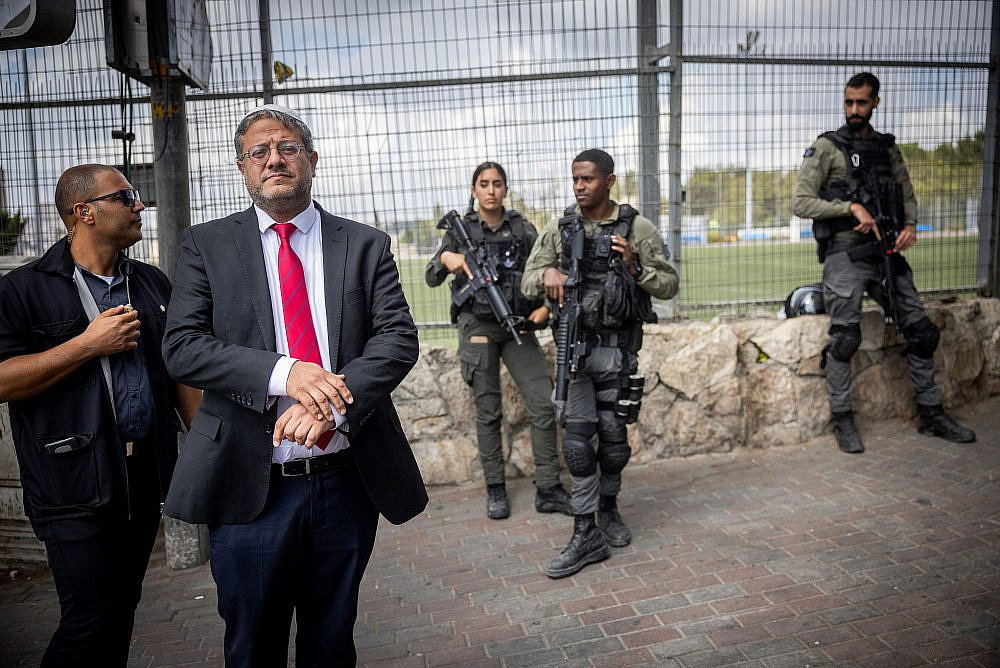 The meteoric rise of Kahanist MK Itamar Ben Gvir could serve as material for endless sociological studies on the intersection of religiosity, ethnicity, nationalism, and political persuasion in Israel.

That Ben Gvir went from a marginal political figure to one of the most popular — and dangerous — leaders in Israeli politics in the span of just a few years should force us to take a long, hard look at how we got here. But more importantly, we should be asking how Ben Gvirism, with its bloody promise of violence against Palestinians and leftist Israelis, beat out the erstwhile heroes of Israeli society: Israeli army generals, as represented by former IDF Chief of Staff Benny Gantz’s National Unity Party.

In a state that is militaristic to the core, where students are taught to worship the military from the day they are born, one could have expected Gantz’s party, which also includes former army head Gadi Eizenkot (and previously included another, Moshe Ya’alon), to be a resounding success. And yet, as of Thursday evening, with less than 5 percent of ballots left to count, the National Unity Party has won only 12 Knesset seats, as opposed to the Religious Zionist party — the union of far-right parties, including Ben Gvir’s Otzma Yehudit slate — which will likely take home between 14-15 seats. The fact that Ben Gvir, who never served a day in the Israeli army, defeated two giants of the Israeli army, is indicative of larger shifts taking place in the country.

Gantz’s party embodies the Jewish supremacism of yesterday. The kind whose actual realization is in the hands of three groups of elites: the political echelon, the military, and the settlers in the occupied West Bank, who operate under the auspices of the first two. These three groups are the most pious gatekeepers of the social hierarchy built into Israeli Jewish society.

The supremacism of yesterday is based on what Israeli sociologist Baruch Kimmerling nicknamed Achusalim, a Hebrew acronym used to describe the old established secular Ashkenazi elite that founded the Israeli state and dominated its political, military, economic, and cultural power structures for decades. Admiration for the army, as the ultimate expression of what Israelis refer to as mamlachtiyut — a term that effectively means putting the good of the state above sectarian divisions and personal interests — is beyond any dispute for this camp. It is this form of Jewish supremacism that turned retired generals such as Yitzhak Rabin and Ehud Barak into prime ministers, and it is also what was largely behind Yair Golan’s parachuting into the liberal Meretz list. Minister of Defense and leader of the National Unity Party Benny Gantz speaks with supporters as the results of the Israeli elections are announced, Tel Aviv, November 2, 2022. (Avshalom Sassoni/Flash90)

The entry of Gantz into Israeli politics and the establishment of the National Unity Party with three former chiefs of staff lean on the inertia of that very worldview, which remains the ideological linchpin of the center-left. It is a worldview that is easy to digest, but kept alive by a small, privileged group.

Ben Gvir is the supremacist of tomorrow. He is the Robin Hood of Jewish supremacism who has stolen the ideology of domination, but rather than hiding it behind the folklore of mamlachtiyut, he proudly flaunts his racist, messianic worldview.

Not only does he have little need for the generals, he scorns them. One could almost call it a “democratization” of Jewish supremacism. Now the powerful elixir is available to everyone, wherever they are. This is exactly what Ben Gvir means when he promises to “return power to the lords of the land.”

This is a new ethos of supremacy, based neither on the “security” discourse of the center-left, nor on the discourse of demography, which has been the common denominator from the Zionist left to the right. Ben Gvir’s supremacy is based on Jewish DNA. Its fulfillment does not require one to enlist in the army or establish outposts on the hills of the West Bank.

Despite its inherent violence, Ben Gvir’s worldview does not necessarily require shedding Palestinian blood in order to be realized. After all, there is not a single right-wing party that can compete with the amount of blood shed by the leaders of the National Unity Party during their tenure as heads of the occupation army. For Ben Gvir, realizing Jewish supremacy requires little more than waking up in the morning as a Jew. That is why it is so enchanting to the different segments of Israeli society that have traditionally been excluded from the centers of power held by the old elites, including Mizrahim and parts of the Haredi public.

What Ben Gvir offers is more available, more effective, and far more addictive. He will hand it out to the masses, all the way to the top, on the shoulders of those who finally got to taste the intoxicating lure of Jewish supremacy. And in no way will he be willing to give it up so quickly.