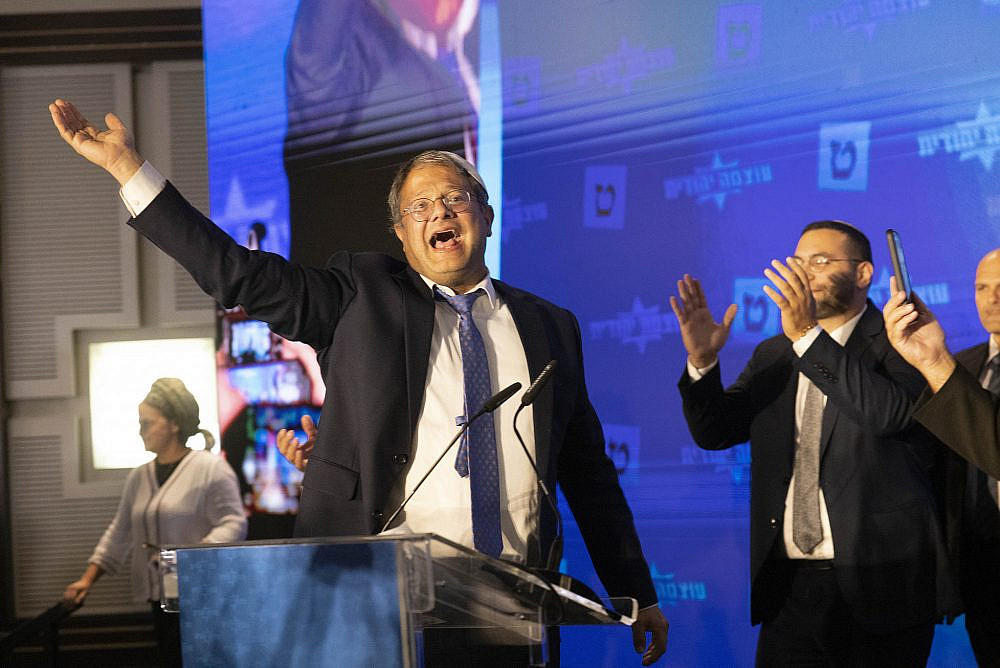 While the final results of the Israeli elections are not yet in, what is clear is that we are left with a dark picture, and the consequences appear dire.

By Wednesday evening, it appeared that Benjamin Netanyahu has a clear path to form a large coalition with the ultra-religious and far right. A likely leading role in such a coalition will be given to the Religious Zionism party, which will be the third-largest party in the Knesset, thanks to the meteoric success of Kahanist MK Itamar Ben Gvir.

With the far-right bloc moving closer to 65 out of 120 Knesset seats, the only threat to this potential new government would be tensions between Netanyahu’s preference to maintain the status quo in the occupied territories on the one hand, and the far right’s push for even more drastic measures against Palestinians. For years, Netanyahu’s policy was to “manage the conflict” by trying to avoid escalation at almost any cost, while creating facts on the ground through de facto annexation and settlement-building, so as to avoid international attention and condemnation. Religious Zionism, however, has campaigned on the slogan “proving [to the Arabs] who the real lords of the land are,” and it is likely that they would want to provide their voters with a bloody Palestinian body count the likes of which could exceed even the previous year’s gruesome toll in the West Bank.

Ben Gvir, styling himself as Netanyahu’s heir, has earned considerable support among Likud voters, meaning that what is now an allyship between the two may turn into a battle that could define the coming few years. Palestinians on both sides of the Green Line, the Israeli left, the media, and the judicial system will be the ones to pay the price of this authoritarian arms race. 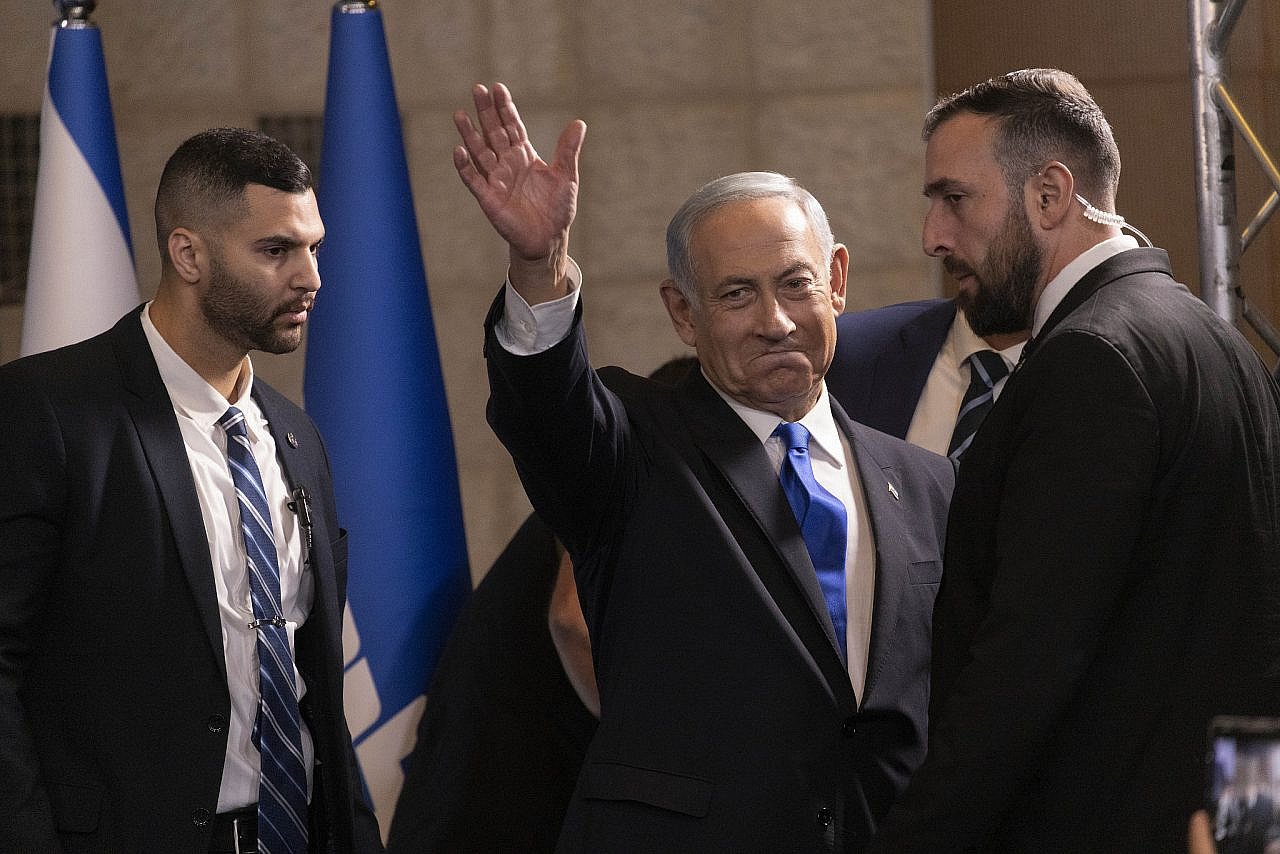 The other major development of these elections has been the continual shrinking of both the Israeli left and the Palestinian parties. At the time of writing, the liberal-Zionist Meretz party has failed to cross the electoral threshold by a small margin, as has Balad, a Palestinian slate that promotes a “state of all its citizens” and pledged not to recommend anyone for prime minister. Meanwhile, the Labor party has dipped from seven to four seats, leaving the Knesset with significantly smaller representation for both left-wing (including the Zionist and non-Zionist left) and Palestinian voices. If there is any hope of stopping a Netanyahu-Ben Gvir government, it lies with both Meretz and Balad passing the threshold.

It was precisely the fear of this current scenario that jump-started attempts to unite Meretz and Labor into a single list, as well as to save the Joint List, which broke apart in the run-up to the elections. The failure of these parties to unite, and in the case of Meretz and Labor to find any way to differentiate themselves from Yair Lapid’s Yesh Atid party, which came in second in the elections, appears to be central to their downfall. 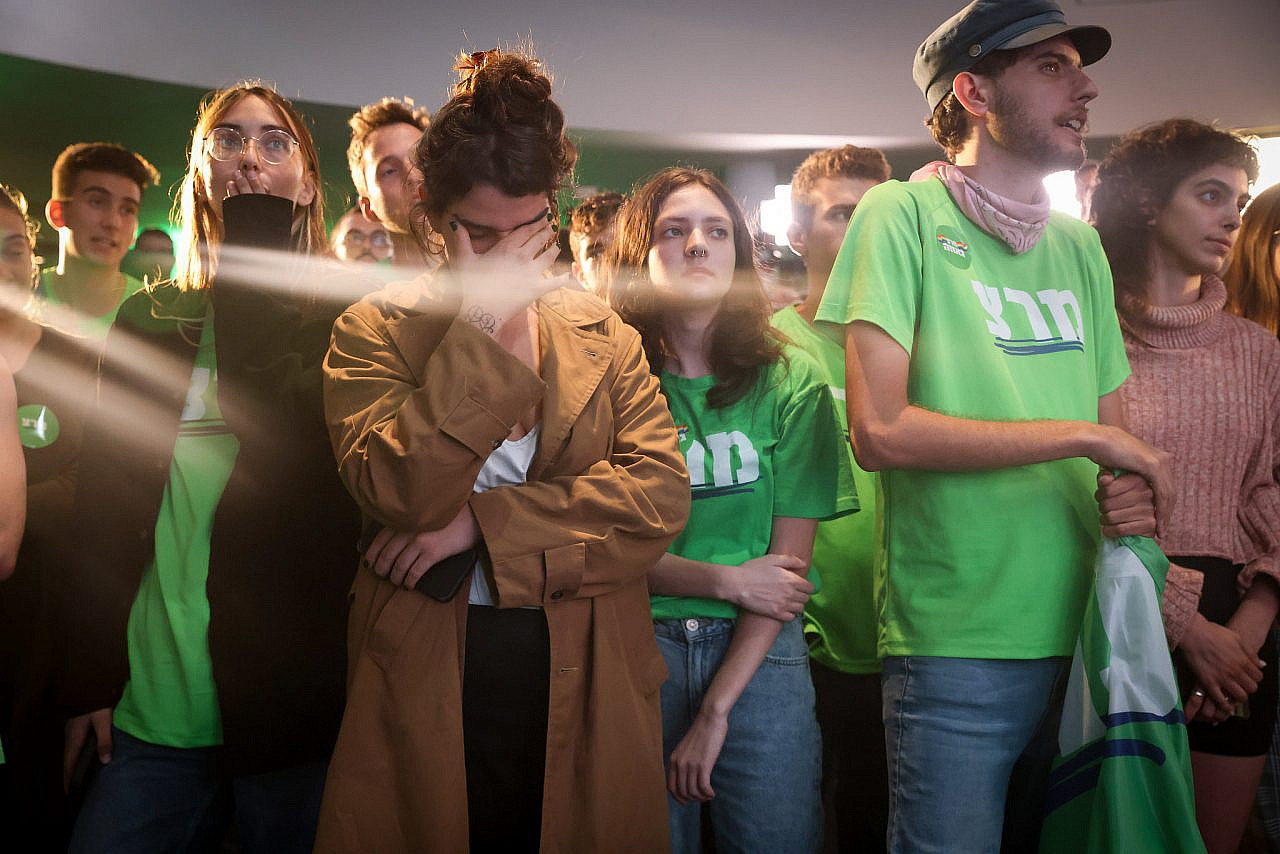 Meretz supporters react as the results of the Israeli elections are announced, Jerusalem November 1, 2022. (Flash90)

The last major failure is that of the political center, which needed all four Palestinian parties to pass the election threshold in order to keep Netanyahu out of power, but was unwilling to put forth an agenda that centers equality for Arab citizens in order to encourage Palestinian voters to come out in significant numbers. While Balad was successful in running an energizing campaign that led to more Palestinian participation, it was not enough to overcome the even more significant increase in turnout among right-wing Jewish voters. Following their failure, one of the centrist parties could perhaps ally with Netanyahu, excusing it by claiming it is the only way to stop Ben Gvir from taking power. However, so far all parties on the anti-Bibi bloc have committed not to join a Likud-led coalition.

Even if one or two of the parties now hanging on by a thread do make it past the threshold, this remains a distressing day for Palestinian citizens and for the Israeli left. Reviewing both mainstream news and social media, one can easily see the fear spreading across communities of what the new government — which would be the most right wing Israel has ever had – might do. Some are talking about ways of seeking asylum abroad, or using second passports to get out of here.

But for those of us who are staying put and willing to continue fighting for the future of this place, for our families and communities, to end apartheid and promote a political system grounded in justice and equity, there is a difficult road ahead. We are facing an economic and political system that is founded on Jewish supremacism and a colonial rationale, and which enjoys the support of some of the world’s strongest superpowers. Had the anti-Bibi bloc offered better platforms, the best we could have wished for would probably have been an electoral deadlock. And so, as important as unity can be, we need to rethink strategies and double down on our efforts. Following are three potential paths for the left, which contradict each other to some degree, but could also be complementary — if the left manages to operate different arms focusing on different tactics. 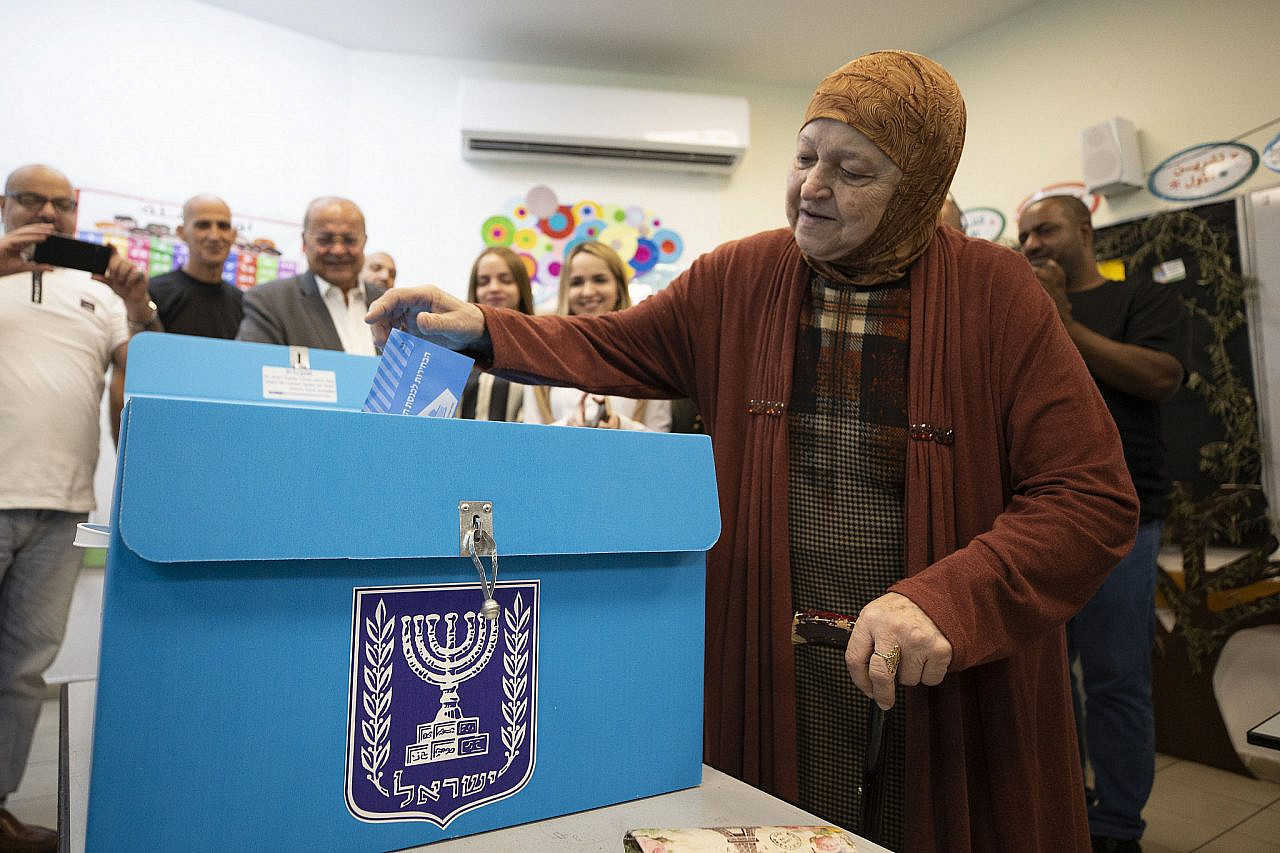 Palestinians vote in the city of Tayibe, November 1, 2022.

One solution, offered by the “Standing Together” movement and others, is to adopt a Bernie Sanders approach to a populist or popular left. This strategy would be a challenge to the Israeli-Jewish left (as embodied by Meretz, for example) that is associated with the elitist, Ashkenazi, upper-middle class and the super-rich in Tel Aviv and the kibbutzim, and which promotes a liberal, civil rights discourse while ignoring the issues concerning middle and lower classes. Even on the issue of Palestine, this left talks about the immorality of the occupation, but won’t be as invested in the concerns and fears of Jewish Israelis and in offering them a positive vision of how life after apartheid could be better for everyone.

The Standing Together model is, by contrast, focused on playing a central role in popular movements for social and climate justice within Israeli society, including campaigns for an increased minimum wage and for public housing, more government spending, better public services, and a “Green New Deal,” all funded through higher taxes on the top 1 percent and large corporations. All this, while also staying committed to deep Arab-Jewish partnership and resistance to the occupation.

With the working classes, Mizrahi communities, Haredim, and the geographic periphery serving as a major base for the far right, which seeks to exploit their marginalization, the “popular left” aims to be the force that breaks the political deadlock between the blocs and shifts a considerable number of voters to the left. To make that happen, the left needs to be physically present in those same communities targeted by the right wing, and to build a new movement from below over the long term.

The above approach assumes that politics is about the question of “who isolates who,” as former MK and Standing Together activist Dov Khenin once told me. Is it the right isolating the left, or vice-versa? It also assumes that a significant number of Jewish Israelis would be willing, under the right conditions, to willfully relinquish their privileges and ally with Palestinians to topple a system of Jewish supremacy.

Another approach, represented to a degree by Balad and other forces on the Palestinian nationalist side of the left, claims that such a scenario is implausible. The settler-colonial fabric of the regime, this argument goes, serves as a powerful mental barrier, preventing any meaningful partnership between Palestinians and anyone who supports a Zionist standpoint. From this perspective, all Zionist parties share almost equal responsibility for the colonial reality, which precludes any form of cooperation with them. That was Balad’s campaign promise for these elections: a full boycott of all Zionists. 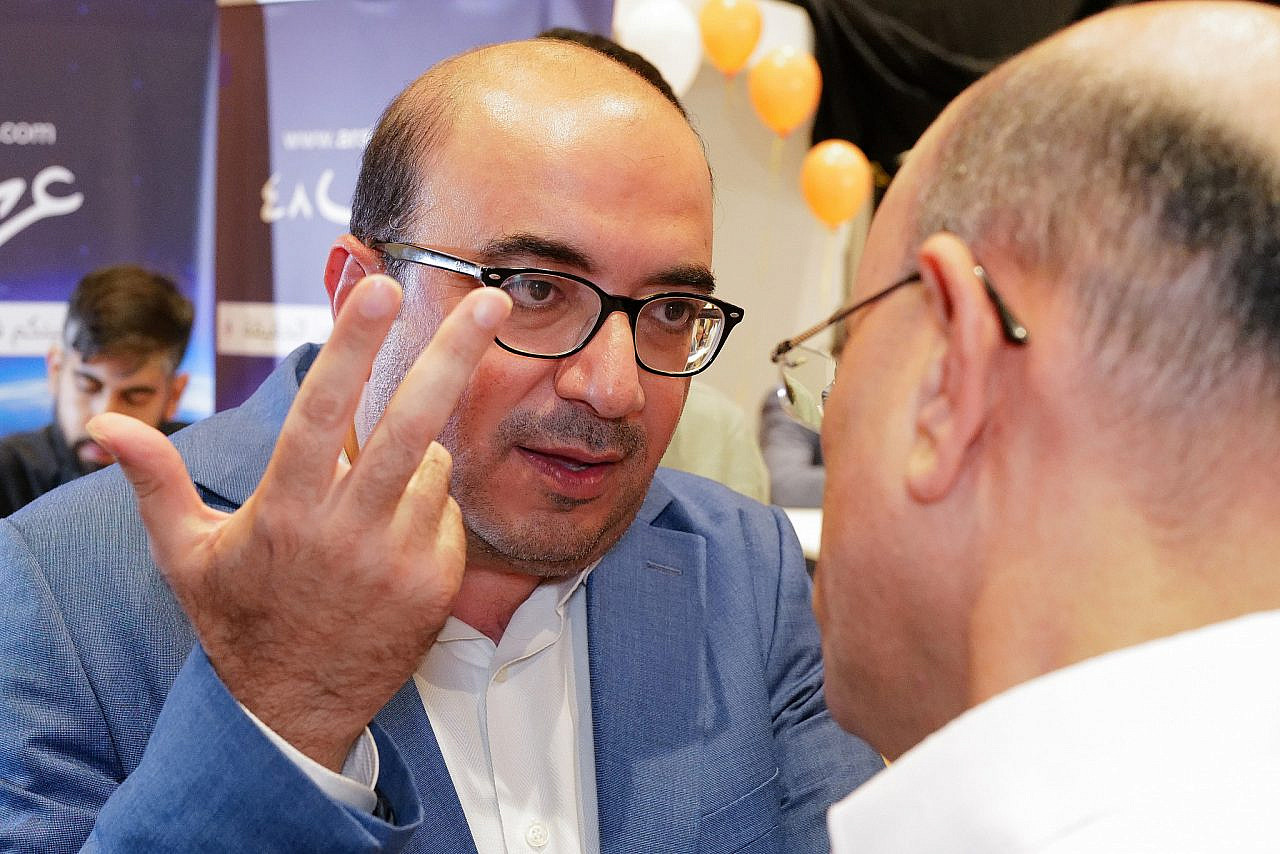 The only path here, then, would be for Palestinians and non-Zionist Jews to adopt a “minority mentality”; stick to a clear, uncompromising message aiming to dismantle the regime in its entirety; and wait on the sidelines for such a time as that vision can be realized.

That latter suggestion would largely depend on some power outside Jewish-Israeli society to force the colonial system into submission. That power could either be a mass Palestinian uprising, considerable international pressure in the form of boycotts, divestment and sanctions, or both. Either of these could be hastened and strengthened through investment and active participation from the left.

From this perspective, the rise of a far-right government in Israel, which will implement extreme measures against Palestinians and internal opposition, could “reveal the true face” of the whole regime, and galvanize the international coalition needed to bring it down. The main problem with this theory, however, is that the “true face” of the regime has never been hidden. Netanyahu himself was in power for 12 consecutive years. The war crimes Israel is committing are plain for all to see, documented by civil rights groups and independent media outlets, and sometimes reaching the mainstream media. The main challenge, then, is not exposing what the regime is up to, but rather building legitimacy to stop it — at a time when increasingly criticism of Israel in western countries is immediately framed as antisemitism.

There is one central obstacle facing these different approaches. Should a Netanyahu-Ben-Gvir government arise, it will likely make targeting voices critical of the nature of the regime a main goal. This has long been the case with the repression of Palestinian dissent, and could become the case with Jewish-Israeli dissent as well. In both cases, international solidarity will be needed, along with protection for activists, organizers, and human rights defenders.