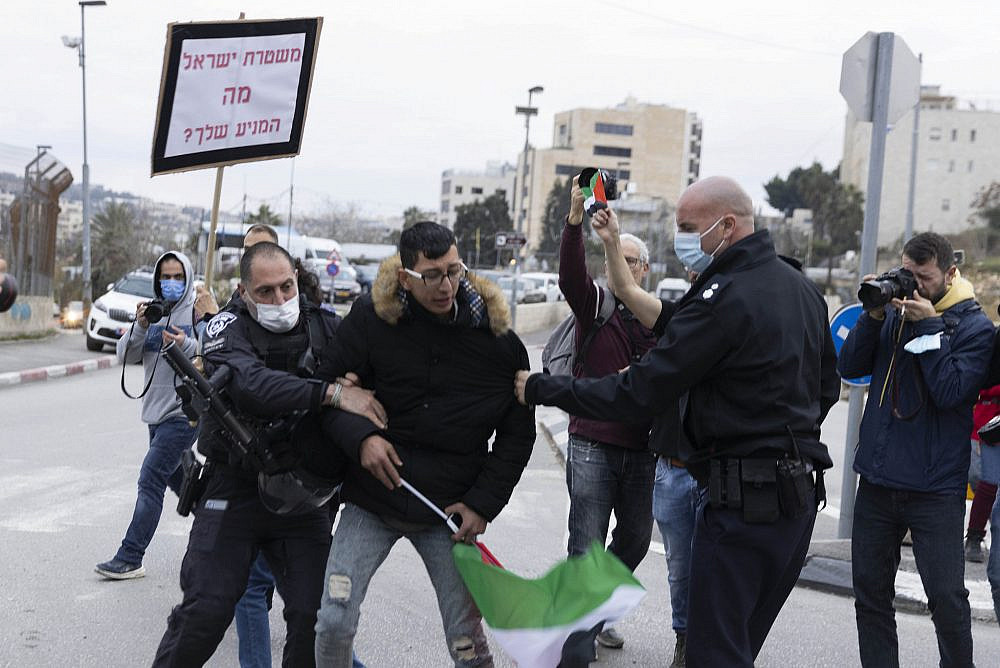 On Sunday, Israel’s National Security Minister Itamar Ben Gvir issued a new directive ordering police to crack down on the flying of Palestinian flags in public spaces. The directive comes in the wake of two events over the past week in which the appearance of Palestinian flags made headlines: the celebratory reception of released Palestinian prisoner Karim Younis in the northern village of ‘Ara, and an anti-government demonstration in Tel Aviv where a few protesters waved the Palestinian flag amid a sea of Israeli flags.

But despite all the noise, there is nothing new here. The Palestinian flag (routinely referred to by Israeli leaders and right-wing commentators as the “PLO flag”) has, for much of Israel’s history, been viewed as a threat to the state. Over the past few years, the flag’s appearance in public spaces has increasingly drawn the ire of right-wing leaders — including, notably, during various events marking Nakba Day on university campuses around the country last year. Ben Gvir’s new directive represents just the latest step in Israel’s intensifying war on the Palestinian flag.

More than anything, the directive illustrates the Israeli right’s fear of any symbol that seeks to remind it that, despite Israel’s best efforts, the Palestinian people refuse to disappear, and no amount of repression will help. Palestinians, who live under colonialism, occupation, and apartheid, won’t go quietly into the night. On the contrary, one can assume that Ben Gvir’s directive will lead to the opposite result: more flags in the public space, at the cost of increased police violence and arrests.

What does the law say?

According to Israeli law, flying the Palestinian flag is completely legal. After the signing of the Oslo Accords, which initiated official relations between Israel and the Palestine Liberation Organization (PLO), Israel’s attorney general stated that the public had no interest in criminalizing those who raised the flag. In 2014, Deputy Attorney General Raz Nizri stated that Palestinian flags can be removed only when “there is concern at the level of high probability that the waving of the flag will lead to a serious violation of public peace,” or when “a real suspicion arises that waving the flag constitutes an offense of identification with or sympathy for a terrorist organization.”

Israeli courts have also ruled several times that waving Palestinian flags is legal, and that police are only allowed to prevent it if there is a fear of disturbing the public order. The police, for their part, have often made liberal use of this justification. In some areas of Jerusalem, such as Damascus Gate and, during certain periods, Sheikh Jarrah, any waving of a Palestinian flag can lead to a violent attack by police officers. Yet just last year, the Jerusalem Magistrate’s Court ordered the release of a protester who was arrested after waving the flag in Sheikh Jarrah. Judge Naheel Mohana argued at the time that “waving the Palestinian flag does not constitute an offense according to the law.” 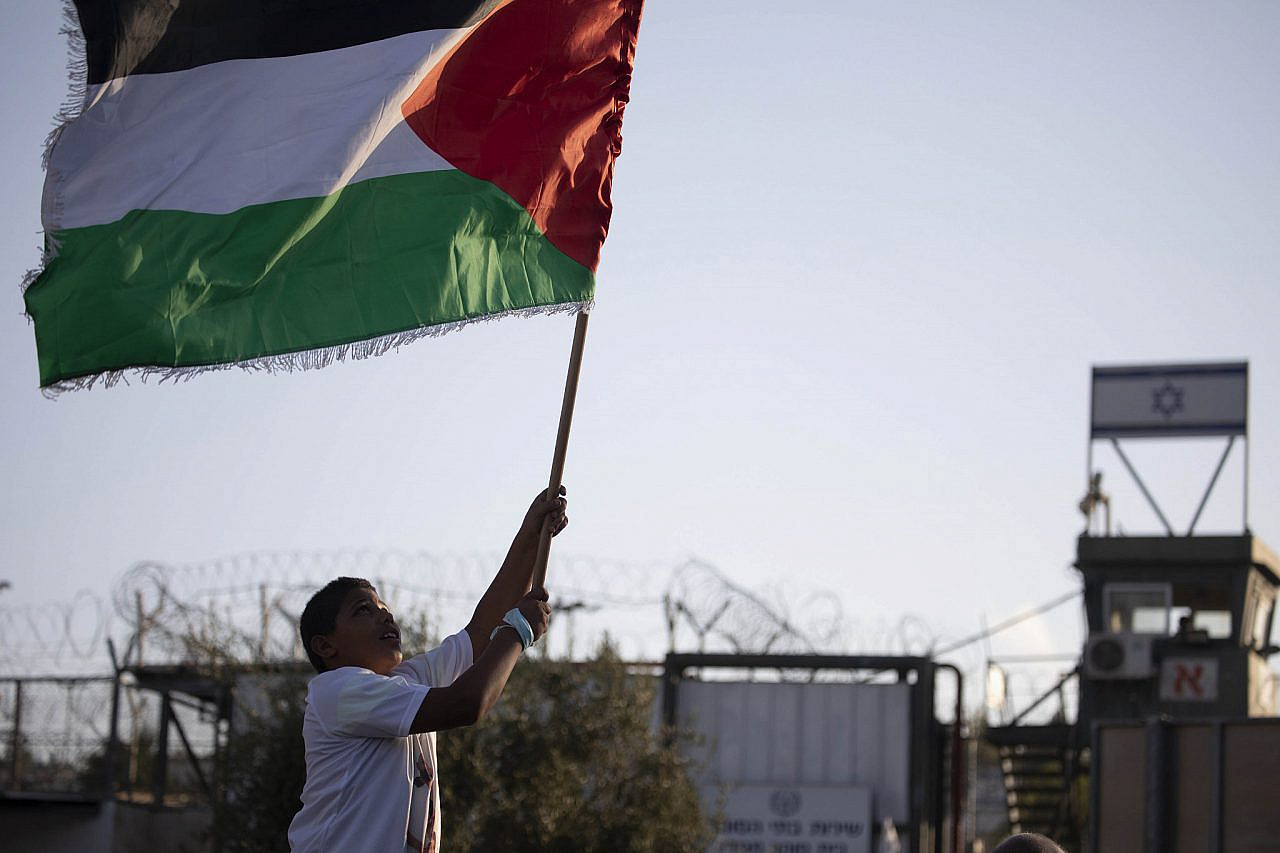 A Palestinian boy waves a flag at a protest outside the Megiddo prison in northern Israel, in solidarity with Palestinian prisoners that were arrested during the events of May 2021 in Lydd/Lod and other cities, August 22, 2021. (Oren Ziv)

The Jerusalem District Police has increasingly cracked down on the waving of Palestinian flags since President Donald Trump moved the U.S. Embassy to Jerusalem in 2018. In 2021, however, then-Public Security Minister Omer Bar-Lev asked the police commissioner not to confiscate flags except in exceptional cases, and only when there is a “high probability” that raising the flag would result in “harming public peace.” Despite this directive, dozens of police officers attacked the funeral of Palestinian journalist Shireen Abu Akleh in the city in May 2022, beating participants and confiscating Palestinian flags.

Police in Haifa also ordered protesters not to wave flags ahead of a demonstration in December, before detaining three people on the grounds that doing so interfered with the annual holiday festival held in the city.

Now, the police are expected to act violently at any event where flags are displayed, particularly in cities such as Haifa and Jerusalem. It is unlikely, though, that the new directive will impact the situation in the occupied West Bank, where Palestinian flags are regularly flown in every village, city, and refugee camp.

A symbol of the struggle against the new government

While Ben Gvir hopes to reduce the presence of Palestinian flags in the public space, it is reasonable to assume that his new directive will have the opposite effect. Attempts to stamp out Palestinian national symbols during the First Intifada, when Israeli soldiers raided sewing workshops and forced Palestinian children to climb electricity poles to remove flags, did very little; people began sewing flags at home and painting them on walls in public areas.

Even now, just days after Ben Gvir’s announcement, activists and demonstrators who previously did not wave Palestinian flags have begun wondering where they can obtain them, while others have uploaded photos of themselves with flags on social media. 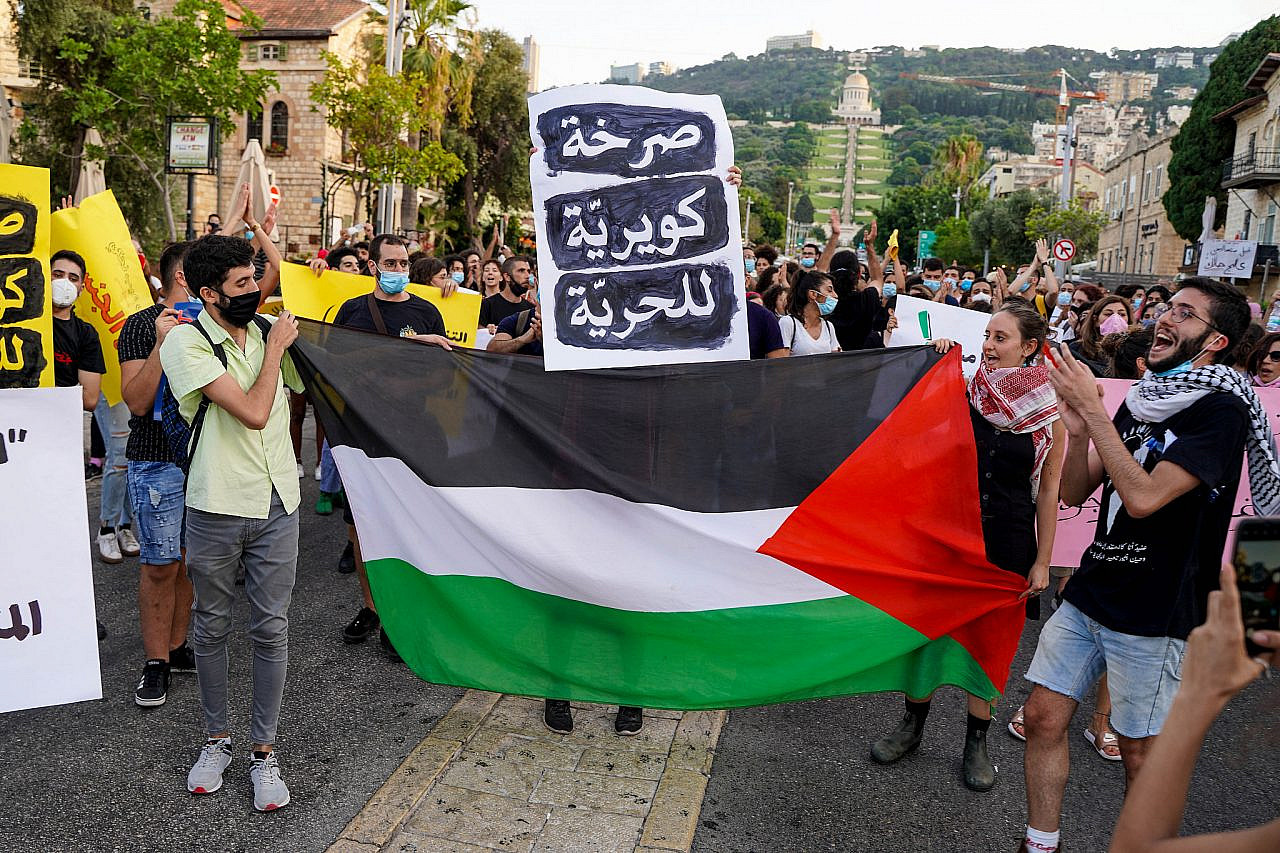 In recent years, demonstrators in East Jerusalem have used balloons, kites, and drones to display Palestinian flags during protests in Sheikh Jarrah and the Old City. In the Palestinian town of Huwara, settlers and soldiers repeatedly worked in tandem to remove Palestinian flags last year, leading Palestinians to double down on raising them until the army completely gave up on the idea of removing them.

The first test of how police respond to the new directive will likely come this Friday at the weekly Palestinian-led demonstration against Judaization in Sheikh Jarrah, where the National Security Ministry has already stated the directive will be enforced. For a long time, the police played cat and mouse with flag-waving protesters in Sheikh Jarrah; in the past, protesters overcame the confiscation attempts by bringing dozens of flags, carrying small flags, or drawing a flag on their palms.

Ben Gvir’s order came less than 48 hours after the demonstration in Tel Aviv against the government, during which a small number of protesters waved Palestinian flags — an act that was criticized by Prime Minister Benjamin Netanyahu and others on the right, as well as by the Zionist center-left. Some of the demonstrators, who were unhappy with the Palestinian flags and anti-colonial signs brought by a handful of left-wing activists, claimed that the focus should be on opposing the far-right’s plans to overhaul the judicial system, harkening to similar arguments voiced during the mass protests against the Jewish Nation-State Law in 2018, the anti-Netanyahu “Balfour” protests of 2020, and, going further back, the social justice protests of 2011.

But the directive itself makes it clear, once again, that under this new regime there is no possibility of choosing a middle ground — and there can be no struggle against this government that does not tackle the occupation or that excludes Palestinian citizens of Israel. There is also no point in apologizing, justifying, or claiming that the flags were not waved, as some prominent center-left activists did after last weekend’s protest in Tel Aviv. All those seeking to oppose this government must accept the fact that Palestinian flags will be symbol of that struggle from now on.