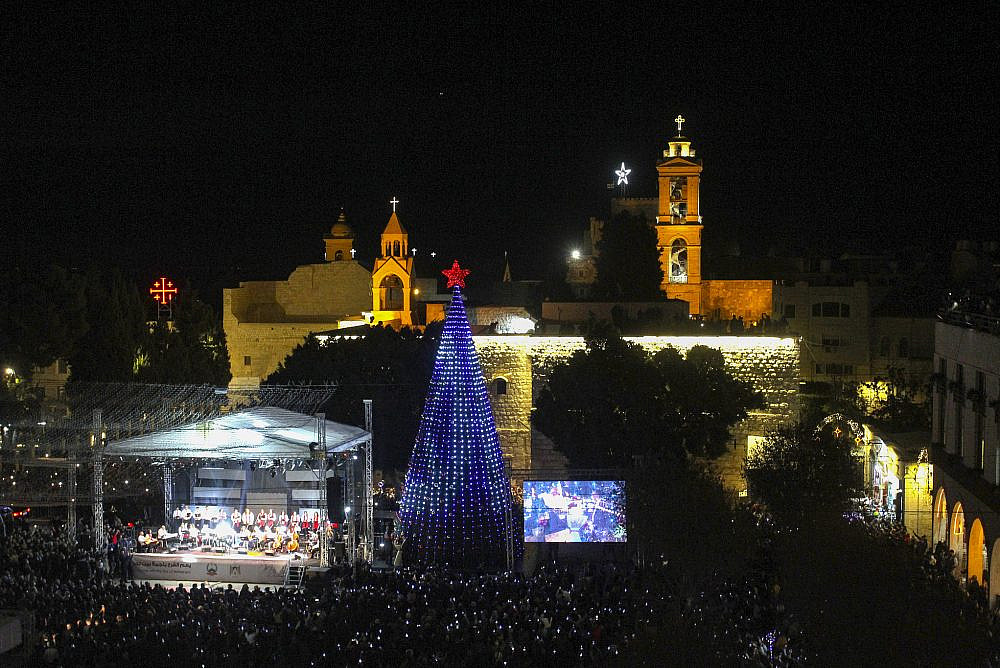 Palestinians watch the lighting of a Christmas tree at Manger Square, outside the Church of the Nativity in West Bank town of Bethlehem, December 4, 2021. (Nasser Ishtayeh/Flash90)

This month was supposed to be prime time for tourism in the occupied Palestinian territories, with visitors and pilgrims making their way to the Holy Land for Christmas festivities. But Israel’s new travel restrictions in response to the omicron variant of COVID-19 have had a devastating impact on Palestine’s tourist season, delivering yet another blow to an economy that is already crippled by decades of military rule.

Behind the scenes, the Palestinian Tourism Ministry is waging a bitter war over the survival of its industry after two years of the coronavirus pandemic, all while confronting the many strangleholds imposed by the Israeli government and army. Israel controls all entry into the occupied territories — by sea, air, and land — meaning every decision made by Israel directly affects every facet of tourism in Palestine.

Earlier this month, I met the Palestinian Tourism Minister, Rula Ma’aya, at a Christmas tree lighting event in Beit Jala, a West Bank town adjacent to Bethlehem. Thousands gathered outside City Hall where various music, dance, and prayer groups performed. At the end of the ceremony, Ma’aya took the stage to press the button that would turn on the tree’s lights and set off the firework display that the audience had been waiting for.

“Tourism is one of the battlefields in the conflict with Israel,” Ma’aya told me. “Over the years, Israel has tried to stifle and destroy this industry in Palestine by forcibly taking over the space; mobilizing the media and its technological capabilities to own and Judaize the religious and historical tourist sites in our homeland; and obliging tourists to consume a heavily-engineered tourism experience that aims to sell them one story — the Zionist story.”

When travel restrictions were lifted in the beginning of October, many foreign tourists began arriving into the country, she said. However, “the Israeli government decided to prevent these groups from staying in Palestine [saying that] the area is not suited to deal with COVID-19, due to the lack of vaccines, masks, and social distancing. As if the tourism workers here did not undergo the proper training like everywhere else in the world.”

The Israeli authorities, Ma’aya continued, “started interrogating tourists as they landed regarding their itinerary and whom they would meet. Some people had to declare that they would not visit Bethlehem, for example. We fought against these guidelines and, following pressure from churches and Palestinian missions in Europe, Israel eventually went back on its decision.” 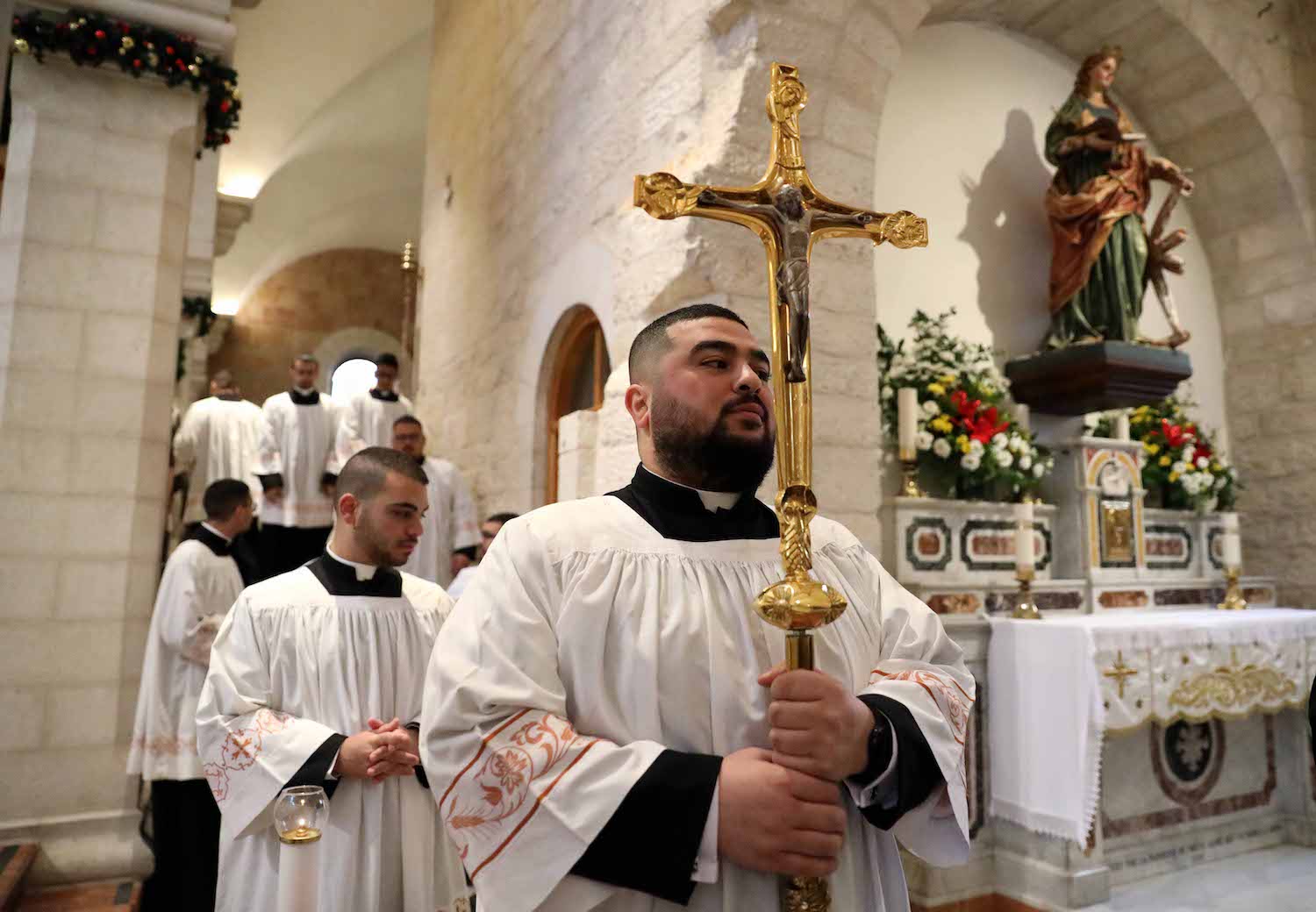 Ma’aya said that 2019 was a record year for the tourism industry in Palestine, with 3.5 million visitors coming from abroad and from Israel, not including domestic tourism within the Palestinian territories. The Palestinian Tourism Ministry recorded 2.7 million overnight stays in hotels, and in response to these numbers, employed about 30,000 new workers.

And what now in light of the new restrictions? “The Holy Land will remain the Holy Land,” she said. “This is the homeland, the land that embraced the prophets, and it knew far more difficult days. We went through the British Mandate here, many wars, and the hostile occupation that has been suffocating us for decades, yet tourism never stopped breathing. Even with pandemics and diseases that have plagued this country, life has won out. In the end, tourists, worshipers, pilgrims, and supporters always came back to us — to Palestine.”

‘Israel controls every bit of hope’

Alongside local Palestinian groups, there are some within Israel who also still believe in political-ideological tourism as a tool to raise awareness and increase the world’s involvement in what is happening in Palestine. Fred Schlomka, co-director of Green Olive Tours, a bi-national tourism collective owned by five Palestinians and five Israelis, is trying to market tours to Israelis in Bethlehem in the Christmas season.

The company’s tours are generally meant for guests from abroad, diplomats, or international organizations from Europe and the United States. They normally manage to bring in about a thousand tourists during the December holidays. Some of the guests stay overnight in Bethlehem, while others come for a single-day tour. 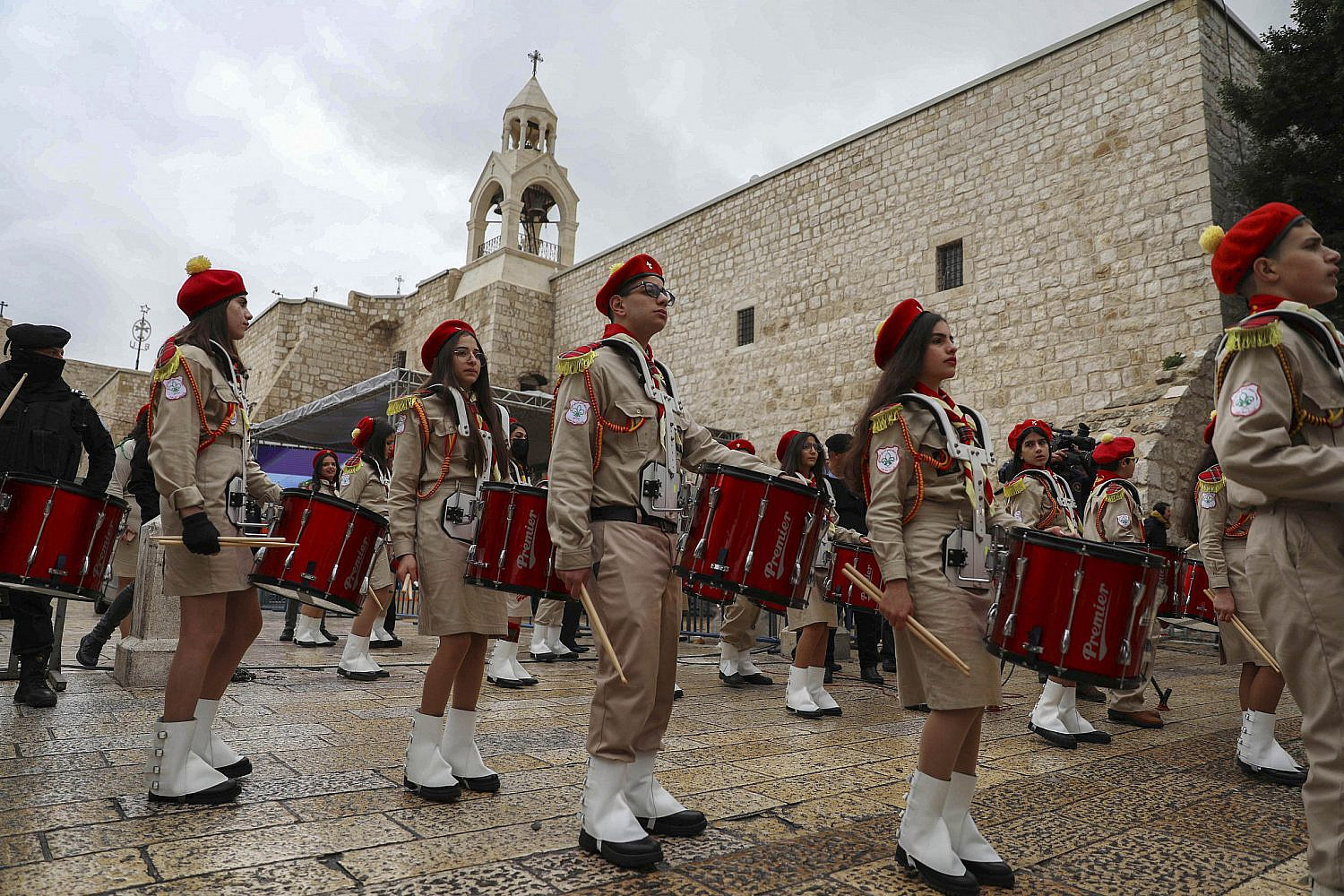 Palestinian scouts participate in a parade as Latin Patriarch Pierbattista Pizzaballa, the top Catholic clergyman in the Holy Land, center, arrives to the Church of the Nativity ahead of the midnight Christmas Mass, in the West Bank town of Bethlehem, Friday, Dec. 24, 2021. (Wisam Hashlamoun/Flash90)

“Our goal is to bring tourists to Palestine and Israel, to help guests understand the reality firsthand, without the state’s brainwashing,” said Schlomka. “Our guests visit the separation fence, refugee camps, as well as holy sites.”

Earlier this month, Israel’s Interior Minister Ayelet Shaked exempted “Jewish tourism” from the ban on entering Israel, meaning programs like Birthright would be able to continue bringing Jewish groups to Israel, while Christian groups would be prevented from visiting the Holy Land for Christmas. Israel eventually added the United States to its “red list,” however, putting a stop to all travel between the two countries.

Schlomka was not surprised by Shaked’s attempt to allow only “Jewish tourism” to continue operating. “What surprised me was the insult toward groups of Christian Zionists, who assumed that they were friends of Israel.” He added: “Everything is political. It’s not a matter of health and coronavirus. What is considered an open secret in the industry is that there is racism and discrimination in the Israeli tourism industry and in government policy.”

This year, Green Olive Tours is also trying to target thousands of non-citizens living in the area, including the Filipino community, which is predominantly Catholic, or Russian Christians, who immigrated from the former USSR and are looking for a place to celebrate Christmas.

Schlomka said that it is hard to get people to sign up for the tours they organize from Tel Aviv and Jerusalem to Bethlehem, forcing the company to lower prices. He also organizes trips to Aida Refugee Camp near Bethlehem, which include the distribution of gifts to the camp’s children. 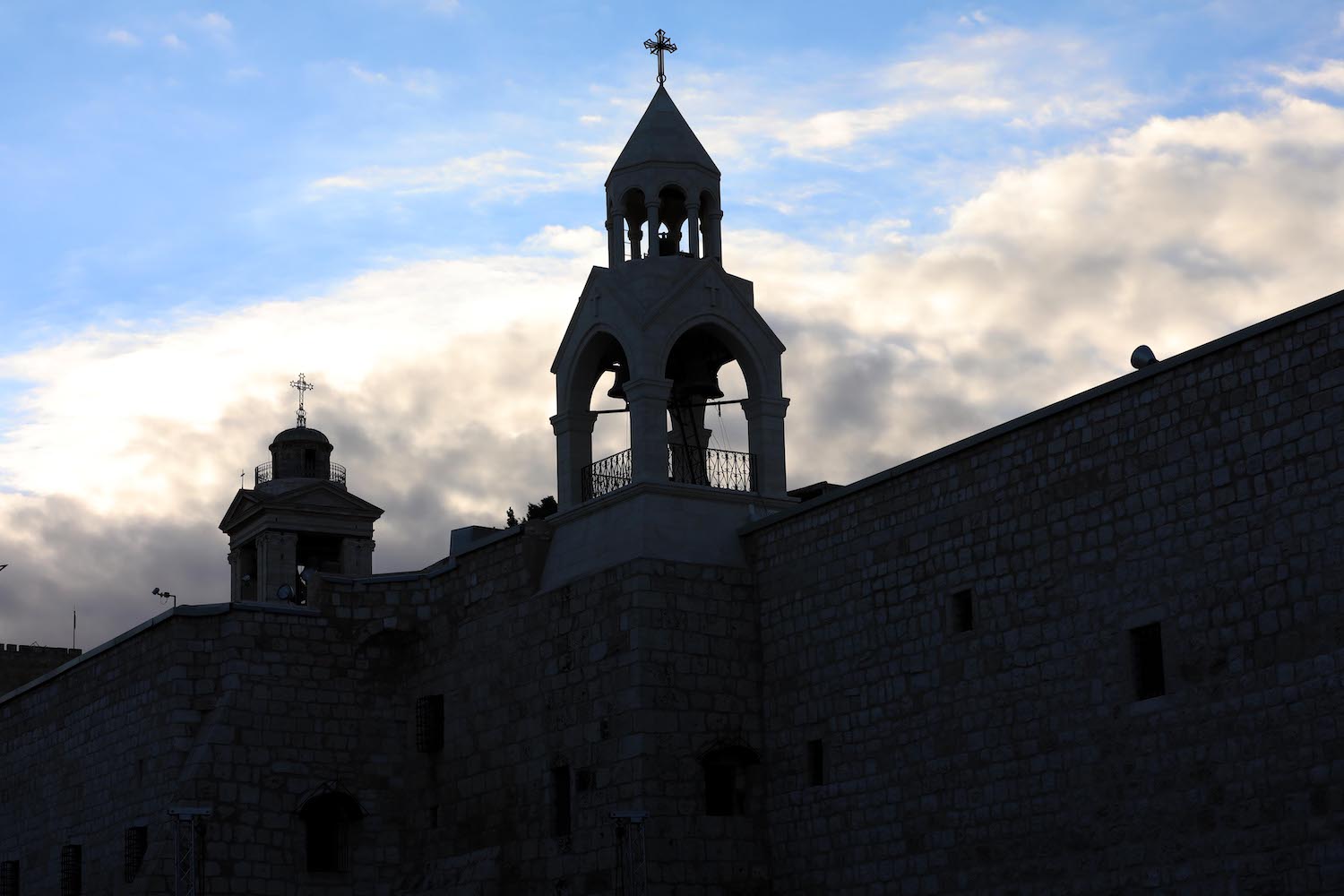 The Church of the Nativity, traditionally believed to be the birthplace of Jesus Christ, Bethlehem, West Bank, December 25, 2021. (Wisam Hashlamoun/Flash90)

Elias, who manages a small, family-run hotel in Bethlehem, said that after two years of tourist stagnation, tourists slowly began to trickle in before the latest restrictions. “By November we had high hopes that the Christmas season would bring thousands of tourists. We were preparing for a particularly busy weekend. Now, with the closure of Ben Gurion Airport again, I’m taking no more risks. I just closed the hotel until the situation clears up,” he said.

“No one is helping the tourism workers in Palestine,” Elias continued. “There is no compensation for the industry, and we are hanging in the air. The disaster is that the Palestinian Authority did not do this to us — once again it’s the Israeli government, which shows us that it controls every bit of hope around us. Israel is the sovereign and it will decide when to open and close the valve.”

‘This was a political decision’

In the weeks leading up to Christmas, Anton Salman, the mayor of Bethlehem and a Palestinian Christian himself, was supposed to be busy welcoming guests from all over the world while briefing delegations and reporters about the city. Instead, he has been busy pressuring the Israeli authorities to allow the entry of religious leaders who are trying to make a pilgrimage to the city’s churches.

“Normally, the tree-lighting ceremony at the Church of the Nativity has thousands of guests, the biggest celebration of the year in the city,” he said. “This year, only several hundred came.” 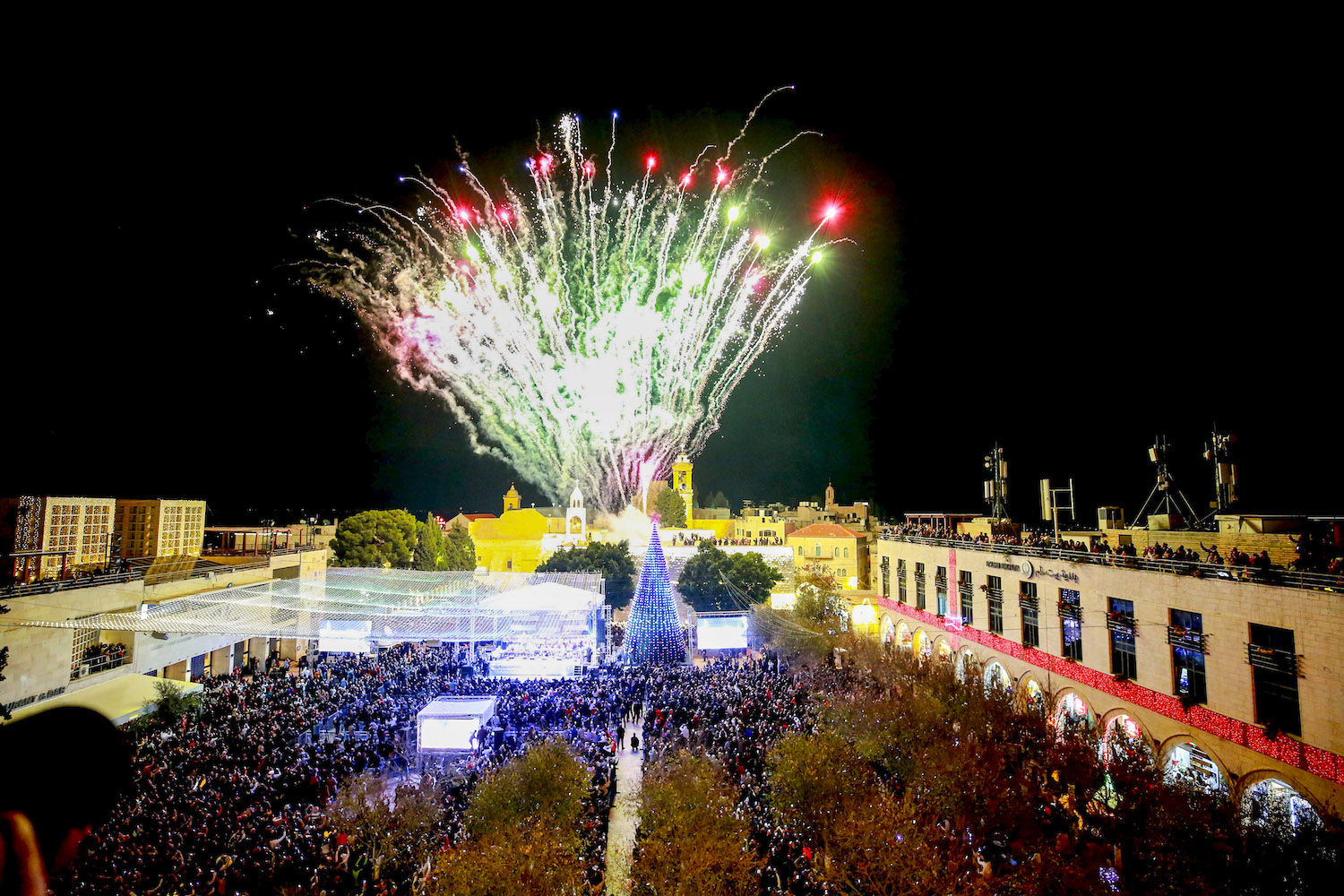 Palestinians watch the lighting of a Christmas tree in Manger Square, outside the Church of the Nativity, Bethlehem, West Bank, December 4, 2021. (Flash90)

The cost of these restrictions, however, is not just financial. “If we calculate how many musicians, guides, spouses, and groups were supposed to come [to the main Christmas event], sleep in hotels, walk around the city, eat and shop here, we reach nearly 1,000 people. Israel just canceled all of it,” said Salman. “The loss is economic, but it is also spiritual and cultural. This is a blow to our national morale, a painful reminder that there is no joy as long as there is occupation.”

The Palestinian tourism industry had already been suffering even prior to the latest travel restrictions. “The first blow was Israel’s warning against, and almost illegal ban on, tourists who came to sleep in Bethlehem in November,” Salman said. “Israel forced tourists at the airport to sign a document upon landing in which they promised not to stay here. Their excuse was that Palestine is considered a coronavirus ‘red zone,’ but it was clear to us that the ban was intended to encourage tourists to visit Jerusalem and Tel Aviv.”

The second blow, he continued, was with the media. “Israel is trying to silence voices — not only musical acts, singers, and artists who come to Palestine, but also those of journalists. We were supposed to broadcast the celebrations in Cairo, Baghdad, and Amman on Jordanian and Egyptian stations. They sent large crews here, all of them vaccinated, and pledged to follow the coronavirus regulations. Israel stopped them and sent them back home. It is clear to us that this was a political decision, and that COVID-19 is simply a cover.”

In the face of these foreign travel restrictions, then, “the only avenue for tourism that remains open today is for Palestinians from ‘48 territories [citizens of Israel]. They come to visit, shop, and spend a few days here. We hang our hopes on them,” said Salman. 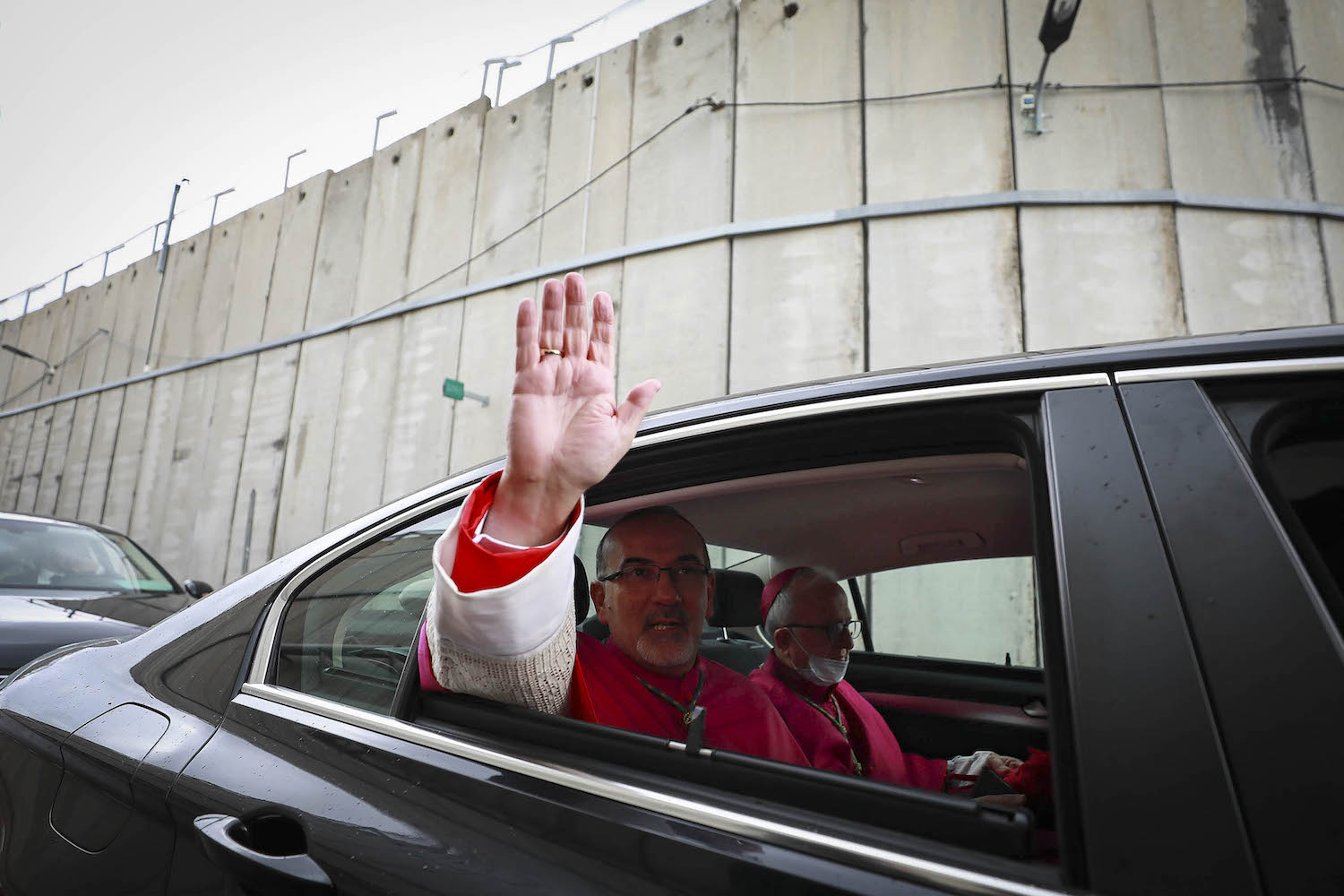 Latin Patriarch Pierbattista Pizzaballa (left) the top Catholic clergyman in Palestine, arrives at the Church of the Nativity ahead of the midnight Christmas Mass, Bethlehem, West Bank, December 24, 2021. (STR/Flash90)

Salman has little optimism for the international community’s gentle diplomacy toward Israel and rhetorical sympathy for the Palestinians, believing instead that only a more forceful line can save their situation.

“People from the European Union came for a solidarity visit to Bethlehem and encouraged Palestinian tourism. But that does not make Israel act,” he explained. “The Vatican has a lot of influence over Israel, and it is difficult for them to use their full force. We sent a letter of protest to the representative of the Catholic Church in East Jerusalem about the difficulties Israel poses for visitors, and about allowing the participation of religious individuals in Christmas prayers and New Year’s mass, but we did not receive any response.”

While heads of churches in Jerusalem publicly challenged Israel with a statement decrying the government’s apathy toward attacks on Christian holy places and clergy, “the policy of occupation and racism is the same policy toward all of us, Muslims and Christians,” Salman stressed. “The bigger plan is to control us as Palestinians.”

Two years ago, former Israeli Prime Minister Benjamin Netanyahu organized a large conference of Christian Zionist leaders in Jerusalem to encourage them to give their sponsorship to Christian sites in the West Bank, claiming it would shield Palestinian Christians from Muslim aggression. Salman said Palestinians didn’t take the bait.

“We, the Christians here, are part of the Palestinian people,” he asserted. “We will defend religious symbols, Muslim and Christian, in the Holy Land, and we have no need for support or defense from the Zionist occupier.”