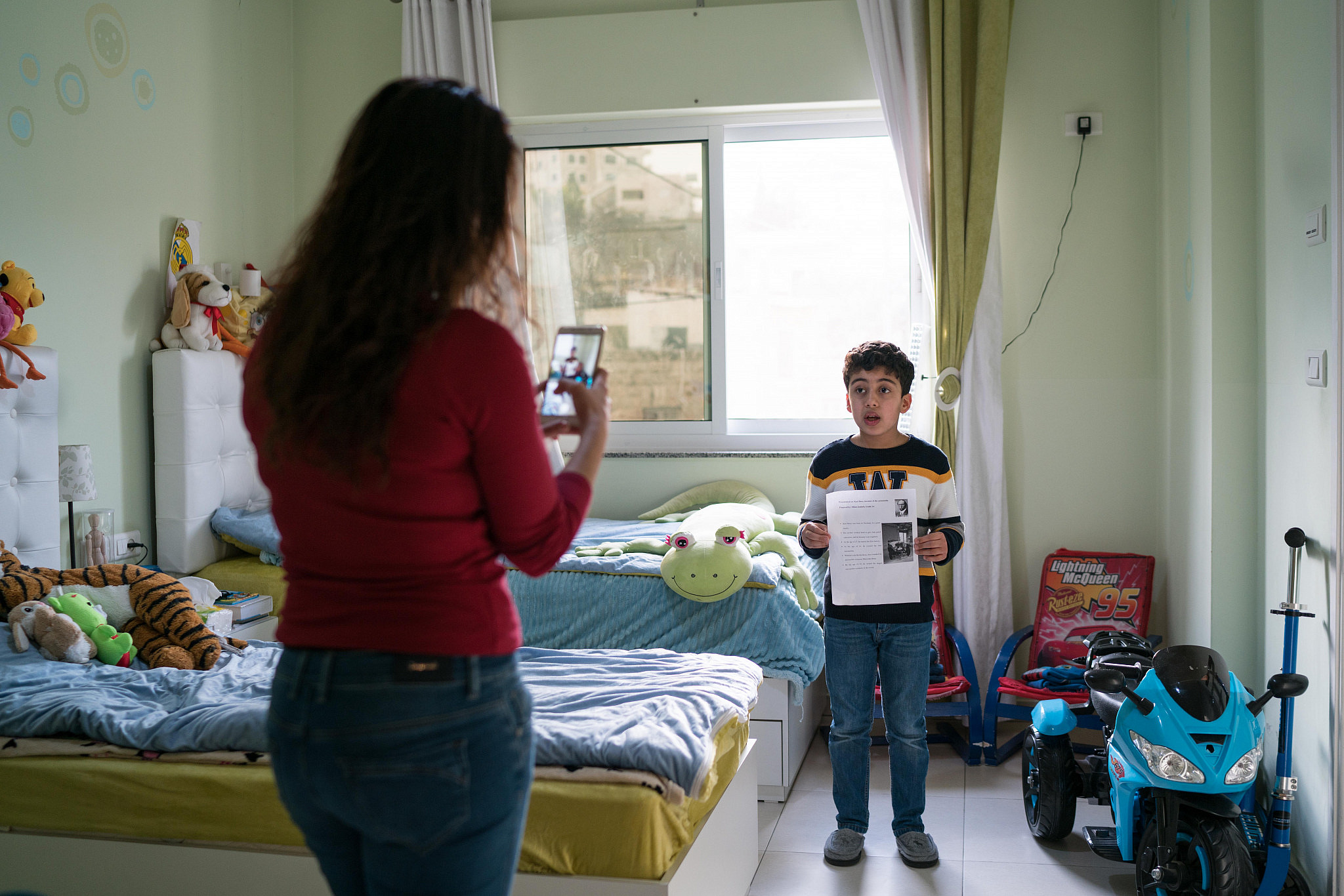 Carol Janine takes a video of her son Milan at their home in Bethlehem as he recites his homework, to send it to his teacher on March 11, 2020. (Samar Hazboun)
facebook twitter email link
By Samar Hazboun March 13, 2020 | Edit

It has been over eight days since Israel and the Palestinian Authority imposed a full closure on the West Bank city of Bethlehem. The lockdown was announced after seven Palestinians in the city tested positive for the new coronavirus disease, COVID-19. As of March 13, the number of cases has risen to 35 — all except one in Bethlehem.

The Palestinian Authority declared a state of emergency within hours of discovering the outbreak, closing all schools and universities. All civil society organizations were asked to shut down, all events were canceled, and public gatherings were prohibited. The PA stationed members of its security forces across the city, only allowing people to travel in urgent cases. Almost overnight, the city turned into a ghost town. The streets are empty, shops and businesses are shuttered, and no one is setting foot outside.

I struggle to make sense of the situation and wonder how people are coping. Despite the imposed quarantine, I decide to investigate the situation, and leave the house to explore what is happening to the city.

I drive into the city center to meet Aziz Mukarker, who owns a produce shop. He tells me that on the first day, people bought a lot of fruit and vegetables. Fueled by panic, they needed to stock up on food. But in the following days, no one set foot in his shop. 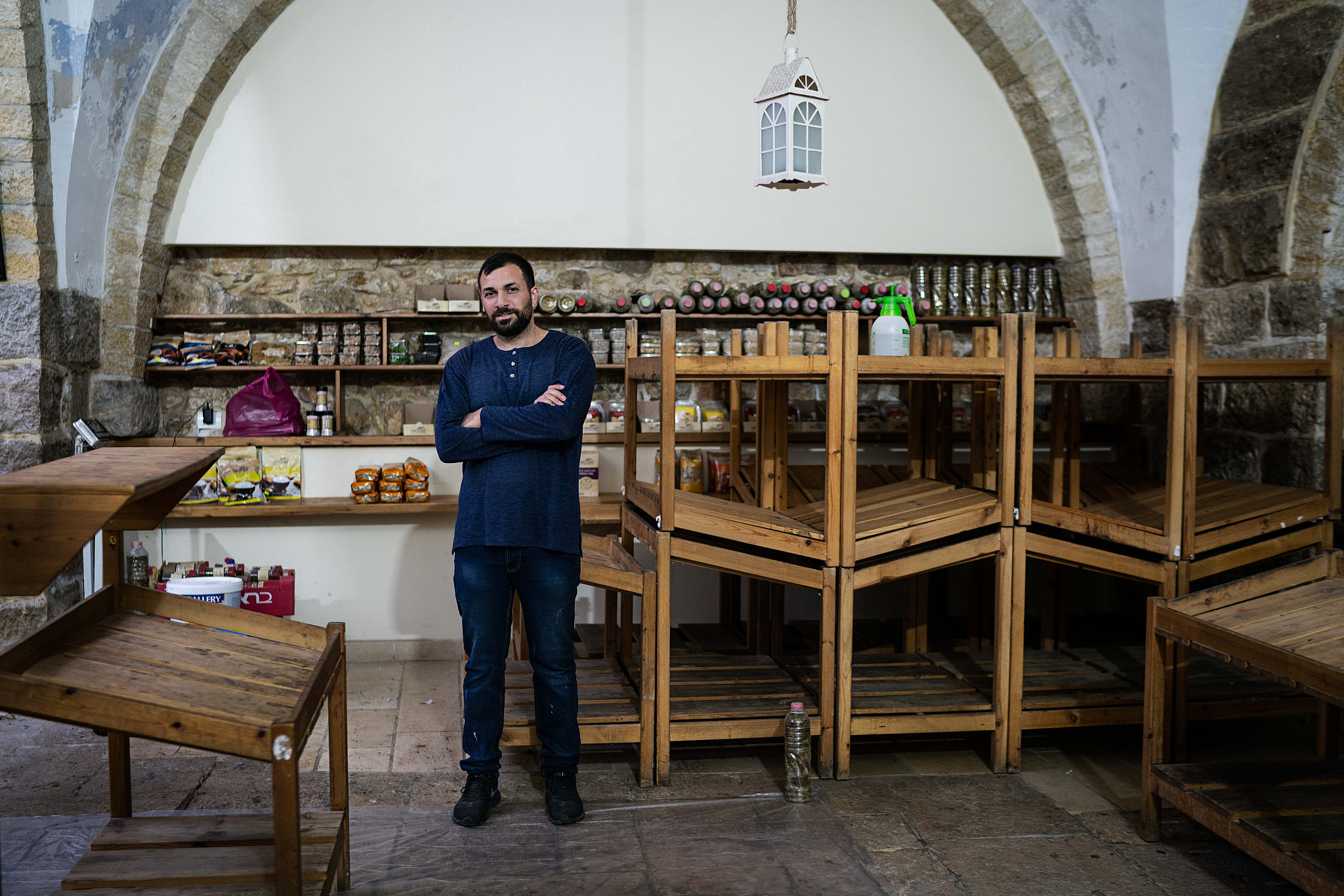 Aziz Mukarker stands amid the empty shelves in his shop in Bethlehem on March 12, 2020. (Samar Hazboun)

“I started becoming really stressed out because the fruits were starting to go bad, and because we had no idea or instructions on how to deal with this crisis,” he says, as he walks amid empty shelves in his shop.

Two days ago, Mukarker posted on his Facebook page that he is selling whatever is left in his shop at a 50 percent discount rate. “Our aim was to empty the shop and maybe take advantage of the situation and do a proper clean-up,” he elaborates.

However, upon asking him what his plan was, he said he was not sure: “I am hoping to open again on Sunday, or sometime next week. People will always need food.”

But the harsh reality is that many Palestinians who work in the private sector or who work as construction workers in Israel haven’t had any income in the past week. A vendor at Mukarker’s shop smiles at me and says, “People were already buying on the ‘dayn’ [debt] system. They will only become more indebted.”

I drive past another checkpoint to meet Nicholas Zeidan, a personal trainer who has been hit by the impact of the pandemic as well. The gym has been closed for over a week, and he has not been able to train his clients. 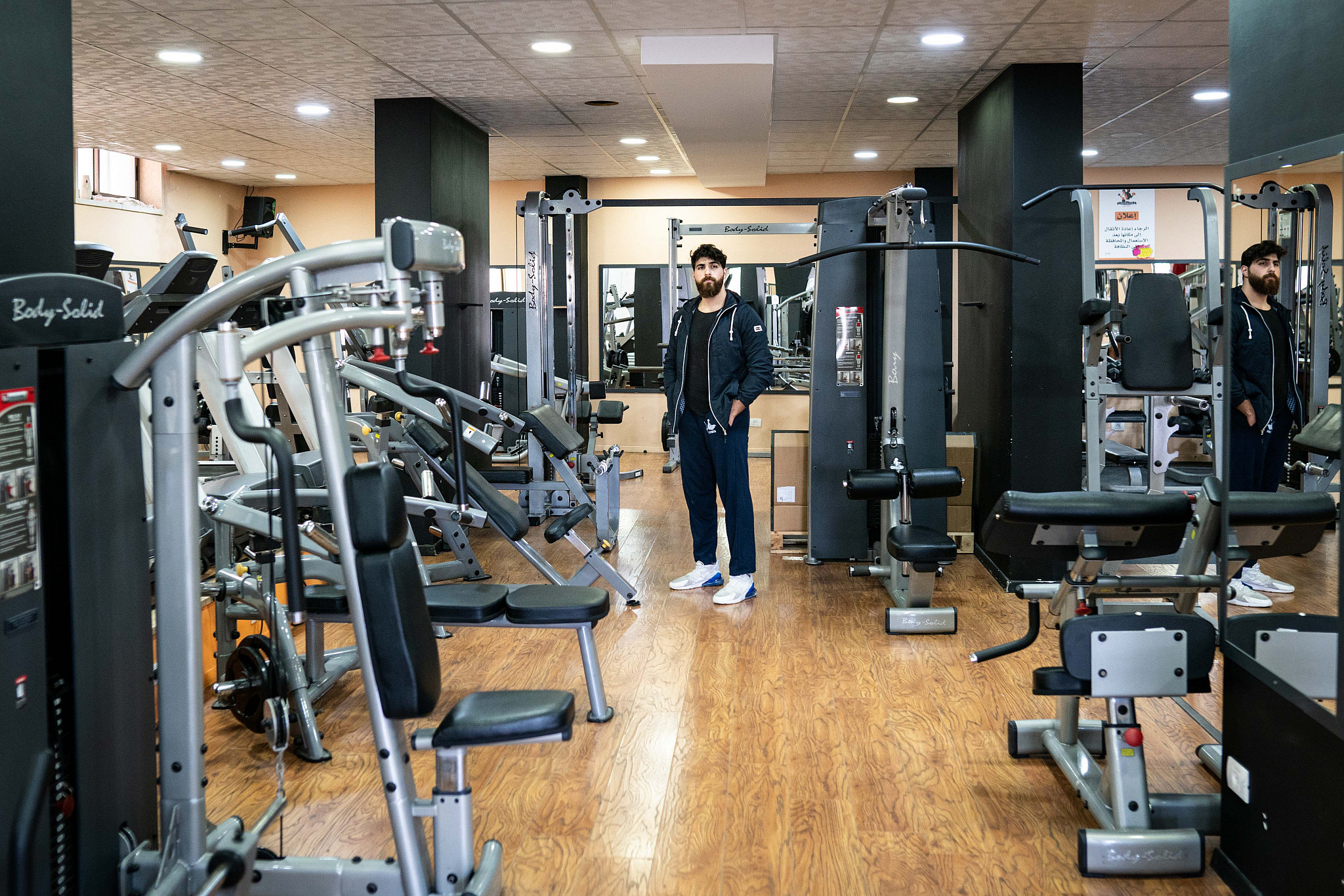 “I mostly get paid per session, so every missed session means a missed payment,” he explains. But his worry is not only financial. He looks at me with his deep light brown eyes and says: “Many of my clients exercise with me to improve their mental health. They come to the gym to release the stress of living under such harsh circumstances. For some people, it is the only way to cope with stress.”

He is right about that. In a 2019 report, the World Health Organization stated that mental health is one of the most significant public health challenges in the occupied territories, as Palestinians are affected by both the exposure to violence as well as the challenges of living under occupation.

Meeting Sabaa Dibs, who will turn 18 in October, only confirmed this statement. Dibs is a high school senior, and was set to graduate in May.

“I spent all of the past week crying. I had my nails done, I bought a graduation robe and a dress, and suddenly everything was cancelled. I feel so devastated,” she said. 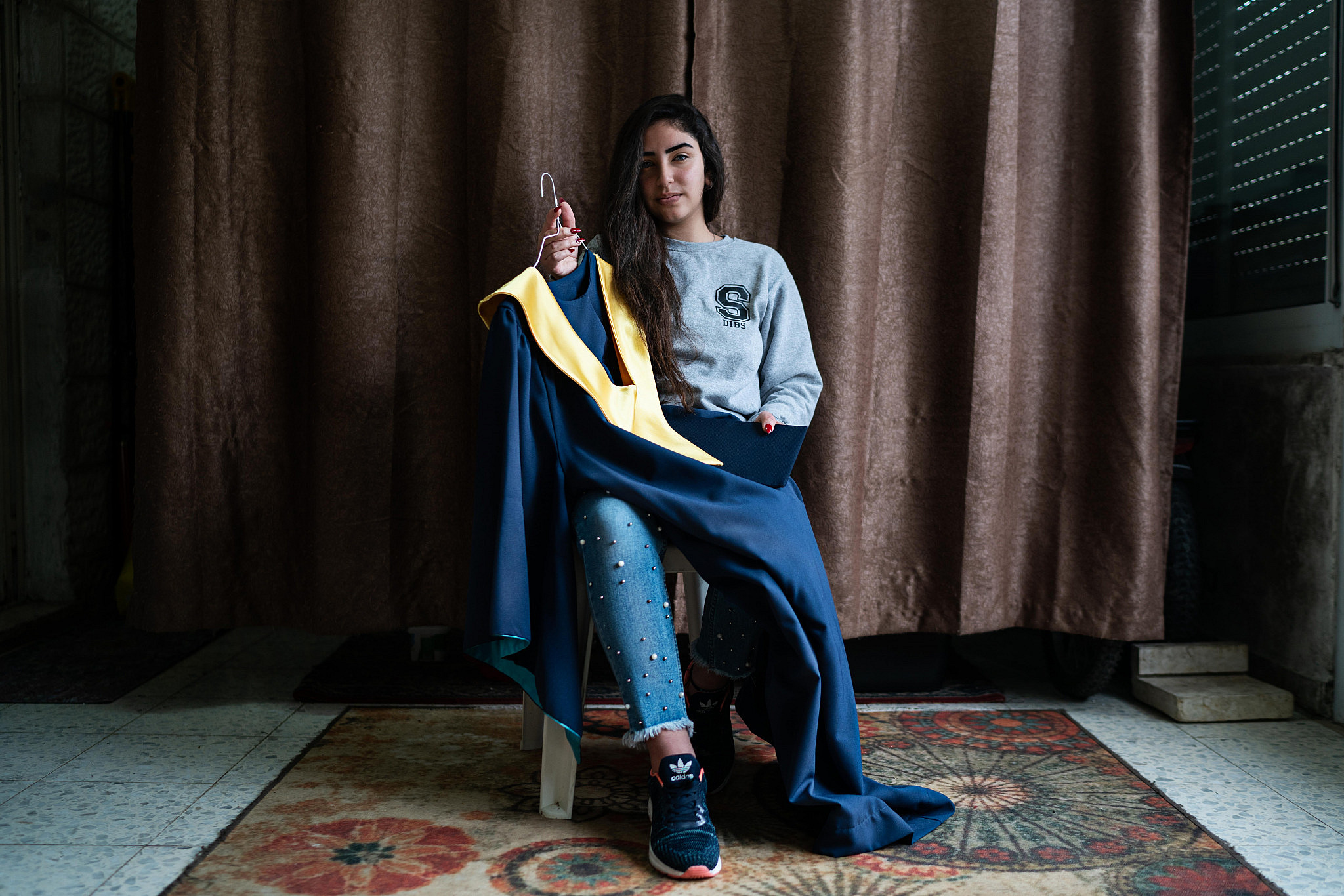 Sabaa Dibs poses with her graduation robe at her home in Bethlehem on March 12, 2020. (Samar Hazboun)

Dibs, whose family holds Jerusalem IDs but now live in Bethlehem, has been through a lot in the past couple of weeks. On Feb. 9, Israeli authorities demolished her family home in Jerusalem under the claim that they did not have a building permit. (Israel rarely approves requests for building permits in East Jerusalem.) This caused Dibs tremendous pain, especially during a stressful period in which she prepares to sit her tawjihi exams (finals). 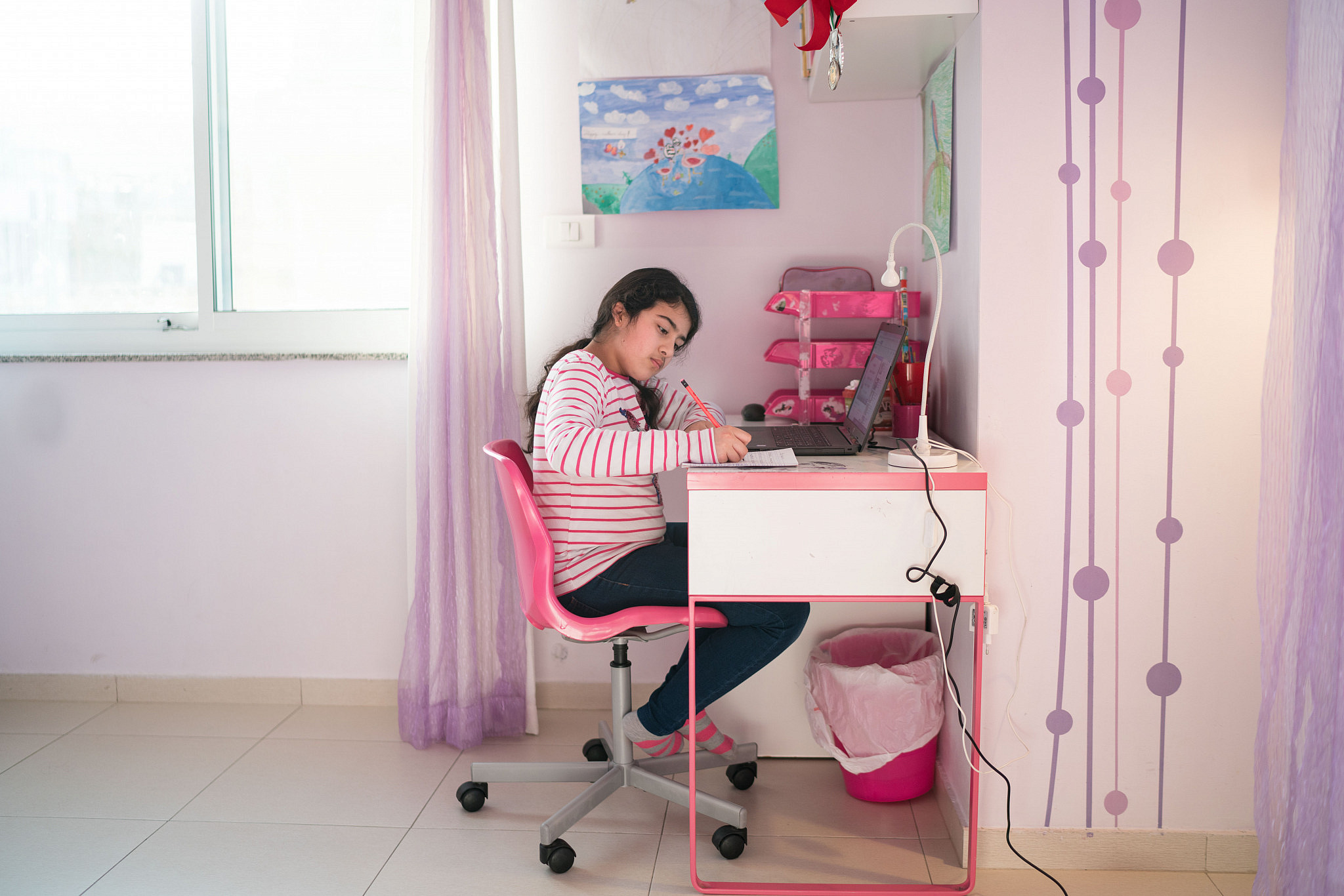 Ariane Janineh uses an online platform to study and submit homework from home in Bethlehem on March 11, 2020. (Samar Hazboun)

With schools and universities in Bethlehem shut down, the task of homeschooling has become an added burden for many parents who are already overstretched with the spread of the virus. Under the current lockdown, Carol Zoughbi-Janineh, the organizational development manager at the East Jerusalem YMCA, has to work from home while also teaching her three children, and making sure they use an online platform to submit their homework. 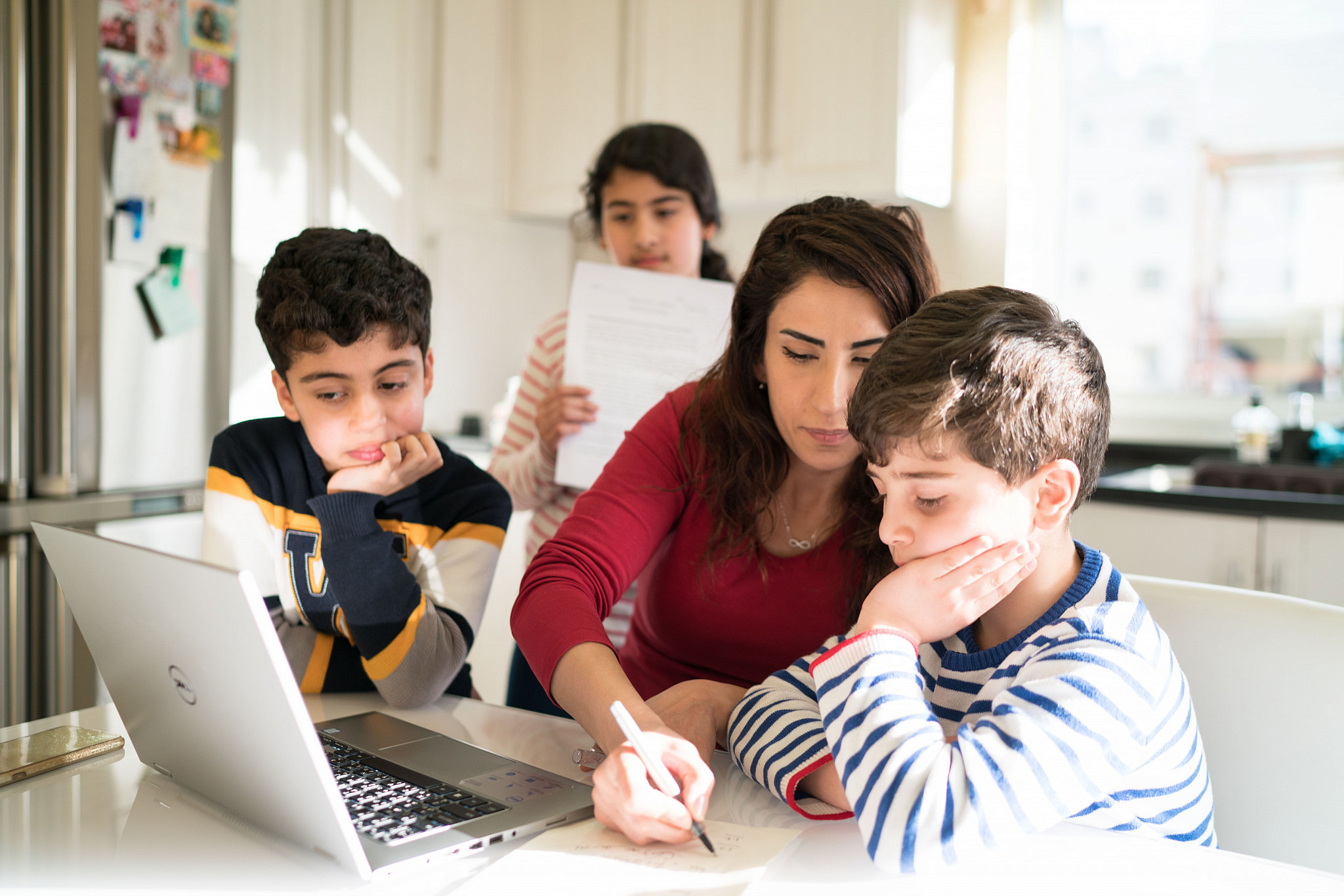 Carol Zoughbi-Janineh works and homeschools her children at their home in Bethlehem on March 11, 2020. (Samar Hazboun)

I spend some time with Zoughbi-Janineh, watching her reply to emails, take phone calls, and help each kid with their homework. Her day seems endless.

But equally endless is the wait for things to get back to normal. Fashion designer Yazan Zeit patiently shows me a collection of dresses he made for the 2020 Bride Show, which was supposed to take place on March 8 but was postponed due to the outbreak of the virus. 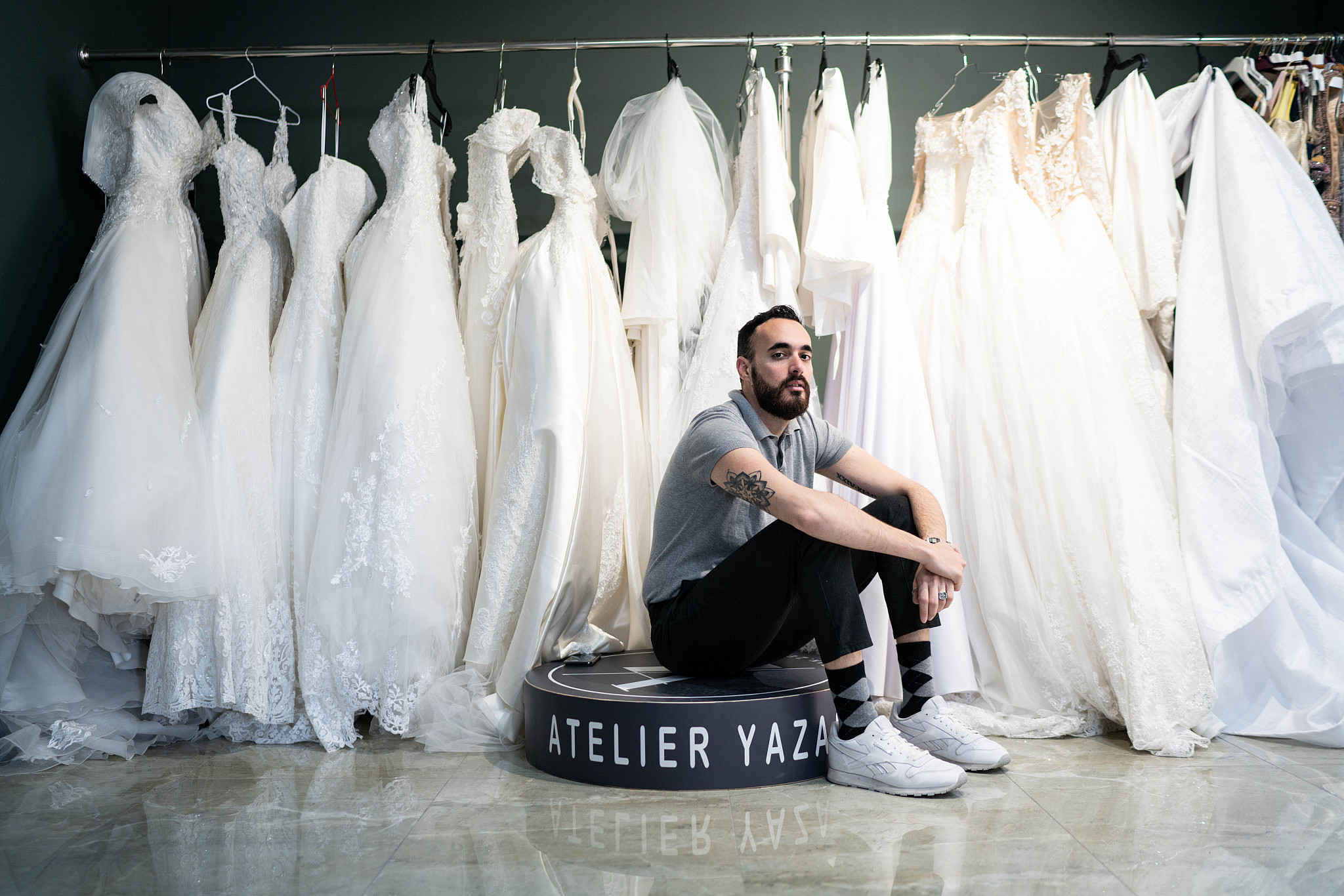 Yazan Zeit sits in his atelier in Bethlehem with his dresses behind him on March 11, 2020. (Samar Hazboun)

Zeit used up a lot of his savings as an investment in this show. Despite keeping a positive attitude and high spirits, I can sense his disappointment.

As I leave his atelier, he tells me he thought of wearing the same outfit he planned to wear on stage for this interview, but then he thought it would be “too much.” He giggles and says: “I bought the outfit in the [United] States, and I’ve been saving it for a special occasion! I really wanted to wear it for the show.” 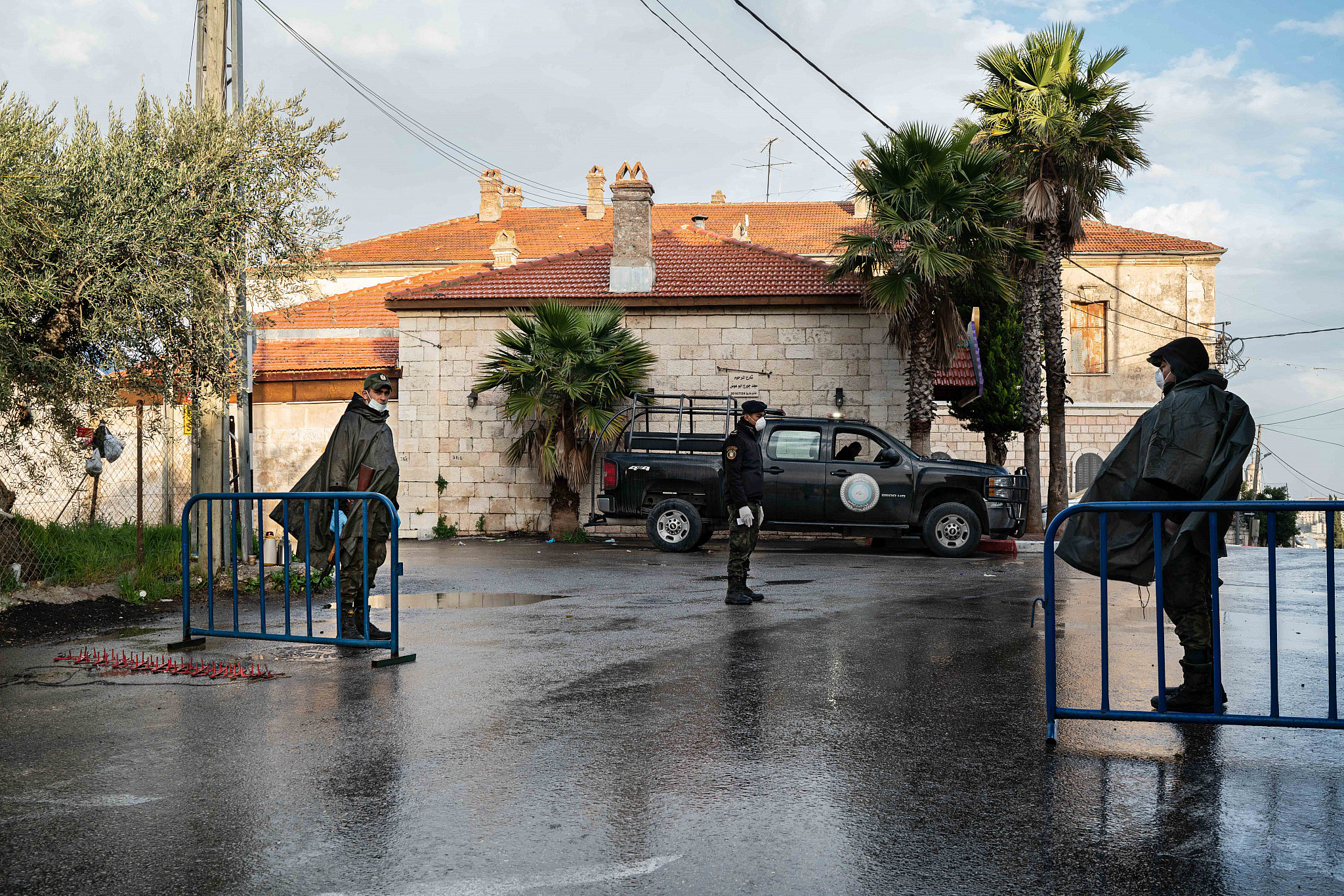 I get in my car and drive through the empty streets again. I am stopped at a checkpoint, and Palestinian police officers implore me to go home right away after I answer some questions about where I am from and where I have been.

I return home to my cat Kharboush, who suffers from kidney problems and is on a prescription diet. Her pet food has to be pre-ordered by a vet, and can only be bought in Jerusalem. I pour some granules in her plate and try to estimate how much longer she can survive on what is left in the bag.

I rest myself on the couch and scroll through my Airbnb listing. With tourists banned from entering, all reservations for March, April, and May have been cancelled. The thought of how I am going to pay my rent sits heavily on my chest but unlike the past few days, I convince myself that I need to be strong today, and repeat some positive affirmations to myself before going to sleep. 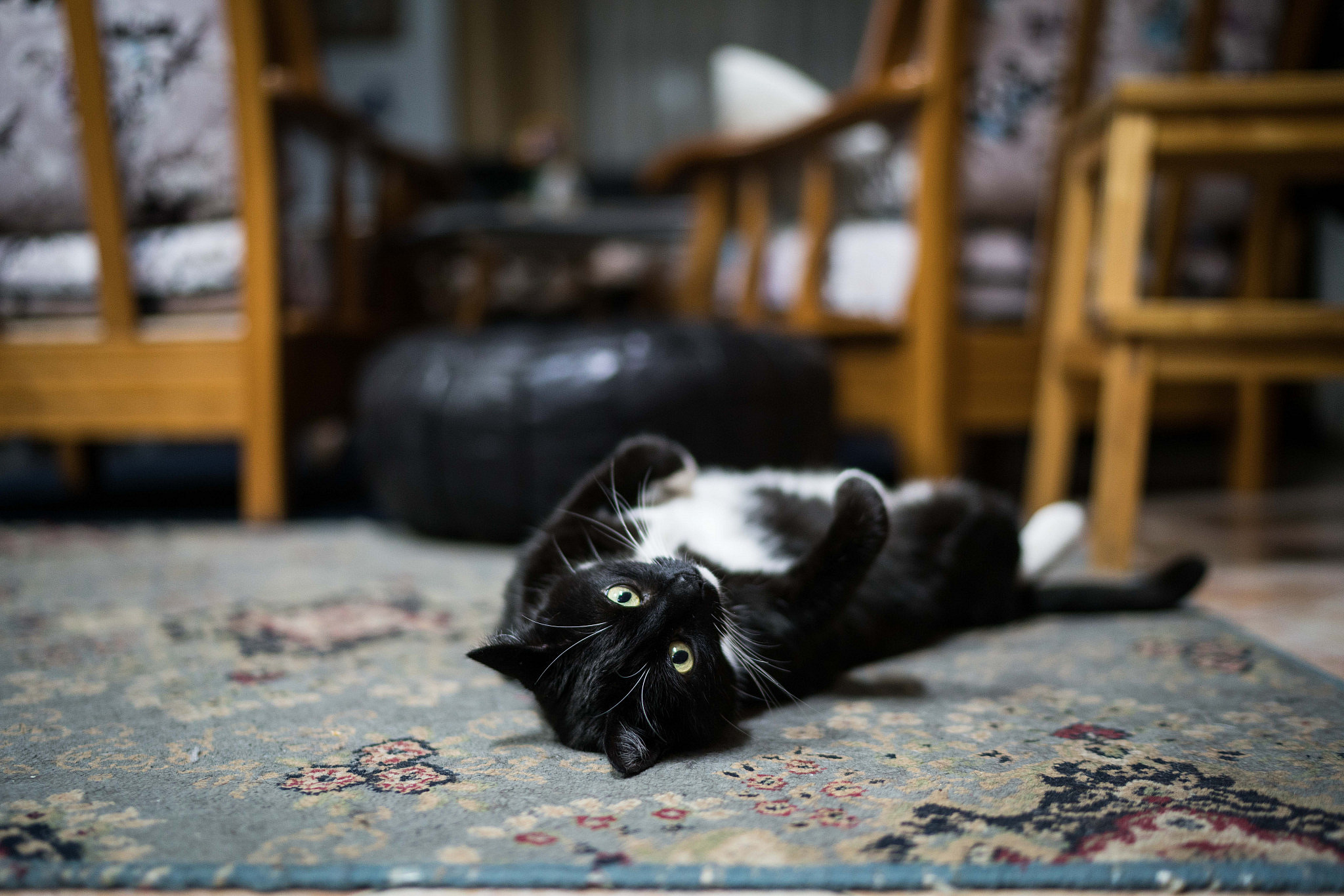 Kharboush who suffers from kidney disease keeps warm next to a heater, in Bethlehem, on March 12, 2020. (Samar Hazboun)

Nonetheless, I keep thinking of a sentence Zoughbi-Janineh wrote me: “Fear and anxiety fill my heart as I feel hopeless during this vague situation… I wish it were a nightmare and that tomorrow morning I would wake up, drive my children down to school, and go to my office. But the morning isn’t coming yet.”

I really wish for this “morning” to come — not just for Carol and myself but for the whole world.

Correction: An earlier version of this story misstated Carol Zoughbi-Janineh’s position at the East Jerusalem YMCA.

Samar Hazboun holds a masters degree in Photojournalism from the University of Westminster, a BA in International Relations, and a degree in Photo and Video Therapy. In 2019, she was a mentor for the Canon education program in Italy. In 2018 she was chosen for the JS Masterclass for the World Press Photo. She worked as a Middle East Photo Editor for AFP for over 4 years before embarking on a freelance career, working for organizations such as UNWOMEN, UNFPA, and Alianza Por Solidaridad, alongside teaching BA students at the Dar Al-Kalima University College. She’s been published by the New York Times, Al-Jazeera, The Intercept, and El Pais, among others. Samar won the Self-Portrait category in the 11th Pollux award. She was awarded grants by the Magnum Foundation, AFAC, and the Prince Claus Fund. She was also awarded the Khalil Al-Sakakini award for her project Hush - Gender based violence in Palestine.