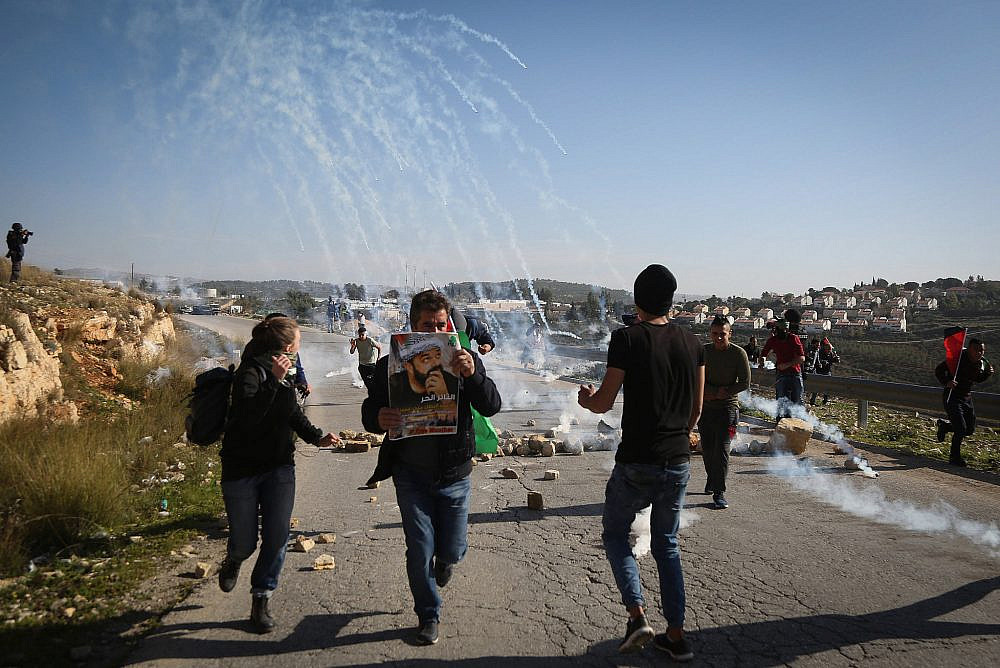 Israeli troops fire tear gas at a protest calling for the release of Palestinian prisoners from Israeli jails, in the West Bank village of Nabi Saleh, Jan. 13, 2018. (Flash90)

In the name of Allah, the most Beneficent, the Most Merciful.

To Mr. Joe Biden, President of the United States of America,

I begin by saying salam, or peace — as a value, an identity, and a common project for all of humanity. A peace that we hope will serve as a manifestation of our national existence on our land, and as an extension for our ethics. A peace that valorizes human life, and is embodied in the civil interaction between our people and the land, in our homeland of Palestine, with all its ancient history.

This is the peace upon which we seek to build our tomorrow and our children’s future. The peace which the enemy wants us to forgo so that it can fulfil its biblical fantasies, which led the world to believe that this was a land without a people.

Mr. President, as you enter the White House, I would like to remind you of the Palestinians who fled their homes — in their memory, their palaces — only to become refugees; those whose livelihoods were destroyed and who were forced into displacement. I, for example, belong to the generation that lived through the Naksa [the 1967 war], which followed the Nakba [the Palestinian exodus following the 1948 war]. 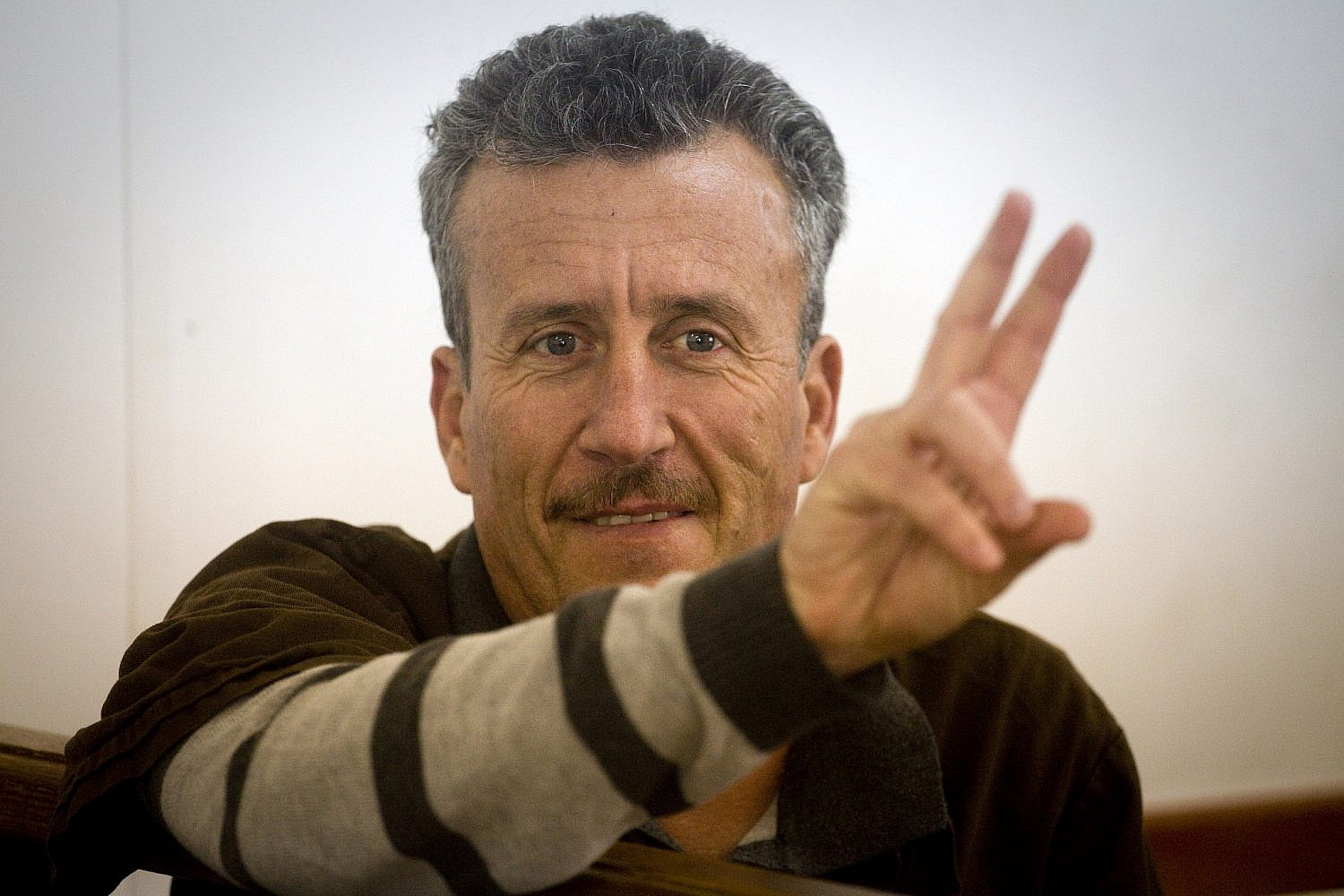 Bassem Tamimi gestures a peace sign during his hearing in an Israeli military court. (Oren Ziv)

I was imprisoned by Israel because I resisted the occupation. I was brutally tortured in interrogation dungeons to the point that I could not walk for some time. My sister was beaten in cold blood at the headquarters of Israel’s so-called “military court,” right in front of her 12-year-old son’s eyes. My land in the village of Nabi Saleh was expropriated, and then strangers built their houses on it. My own home, built in 1964, has been threatened with demolition because it is located in Area C, which according to the Oslo Accords, falls under Israel’s full military and administrative control.

I used to believe in peace and the two-state solution adopted by the Palestine Liberation Organization — our people’s leadership — as our path to liberation from the occupation. I defended that solution, debated others over it, and struggled to achieve it. I sang for peace and named my own son “Salam” as a harbinger of a different future.

But after decades of the peace process, “peace” itself is yet to be born. The power balance is skewed in favor of our opponent. The bulldozers impose a reality on the ground that cannot be overcome with the good intentions of love and peace alone.

Mr. President, one day, when Salam was five years old, he came to me crying and said: “Change my name, I don’t want to be called Salam!” He had heard people mocking and cursing the “peace” process; my son believed that he was the “salam” they were talking about. How, Mr. President, will you restore the word’s meaning so that my son begins to love his name? How will the meaning of freedom, justice, and democracy be restored in the minds of our children? How will we protect them from the lurking temptation of terrorism, from which we all suffer today? 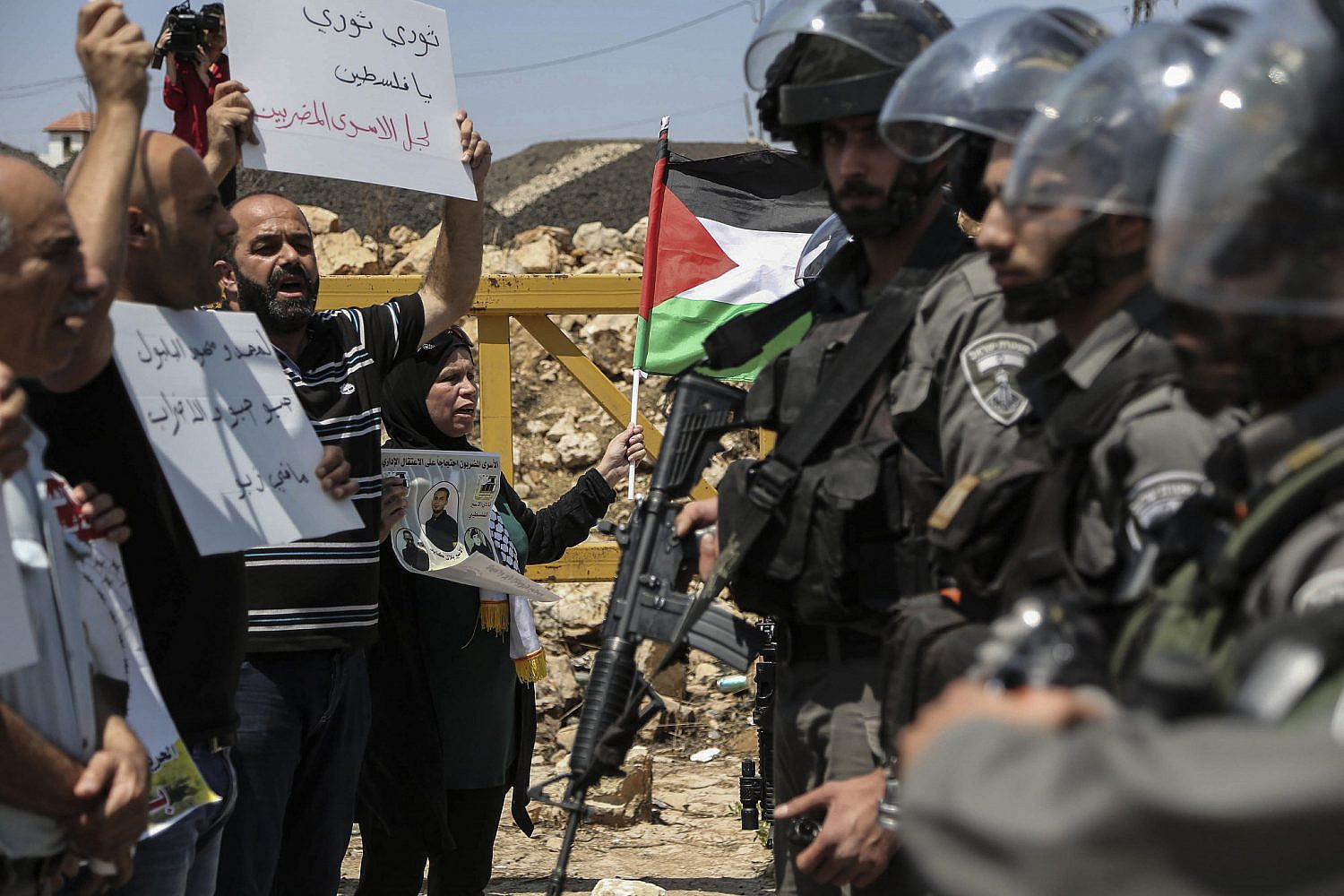 Palestinian protesters hold flags as they argue with Israeli border policemen during a protest in solidarity with Palestinian prisoners held in Israeli jails, in the West Bank village of Nabi Saleh, Aug. 12, 2016. (Flash90)

Nearly three decades after the Oslo Accords were signed, I had a discussion with my daughter, Ahed, and her friends after we attended a protest against annexation and settlements. Amid a cloud of teargas and bullets, and with the force of state terrorism aimed at the new generation of freedom fighters, I attempted to display my intellectual prowess by making an argument in favor of a two-state solution. Ahed told me then:

You, your generation, and the generations before you fought and were imprisoned, wounded, and killed. Our leadership — with all its history and symbolism, and the trust that our people placed in it — believed in this solution. You trusted the world, the UN, and international law, and gave up on 78 percent of the land of Palestine for this solution, for peace.

What did you gain? What did the world, which promised you a country, actually give you? Don’t you see the settlements, father? Don’t you see the wall? Don’t you see the world doesn’t care about our blood and suffering? This world wants our suffering to continue, because it allows it to escape the burden of regret for a crime it committed against humanity. A crime for which we pay the price in pain and suffering, ever since the Balfour Declaration said our country will be the place where the State of Israel is established, to defend the interests of colonization.

So, if we are to be killed, wounded, and jailed for an experiment that the world has proven it cannot achieve, then we ourselves should sacrifice for the liberation of our people and land. We should establish a State of Palestine in which everyone lives freely and peacefully, without discrimination based on race, religion, or color. A free country for free people. 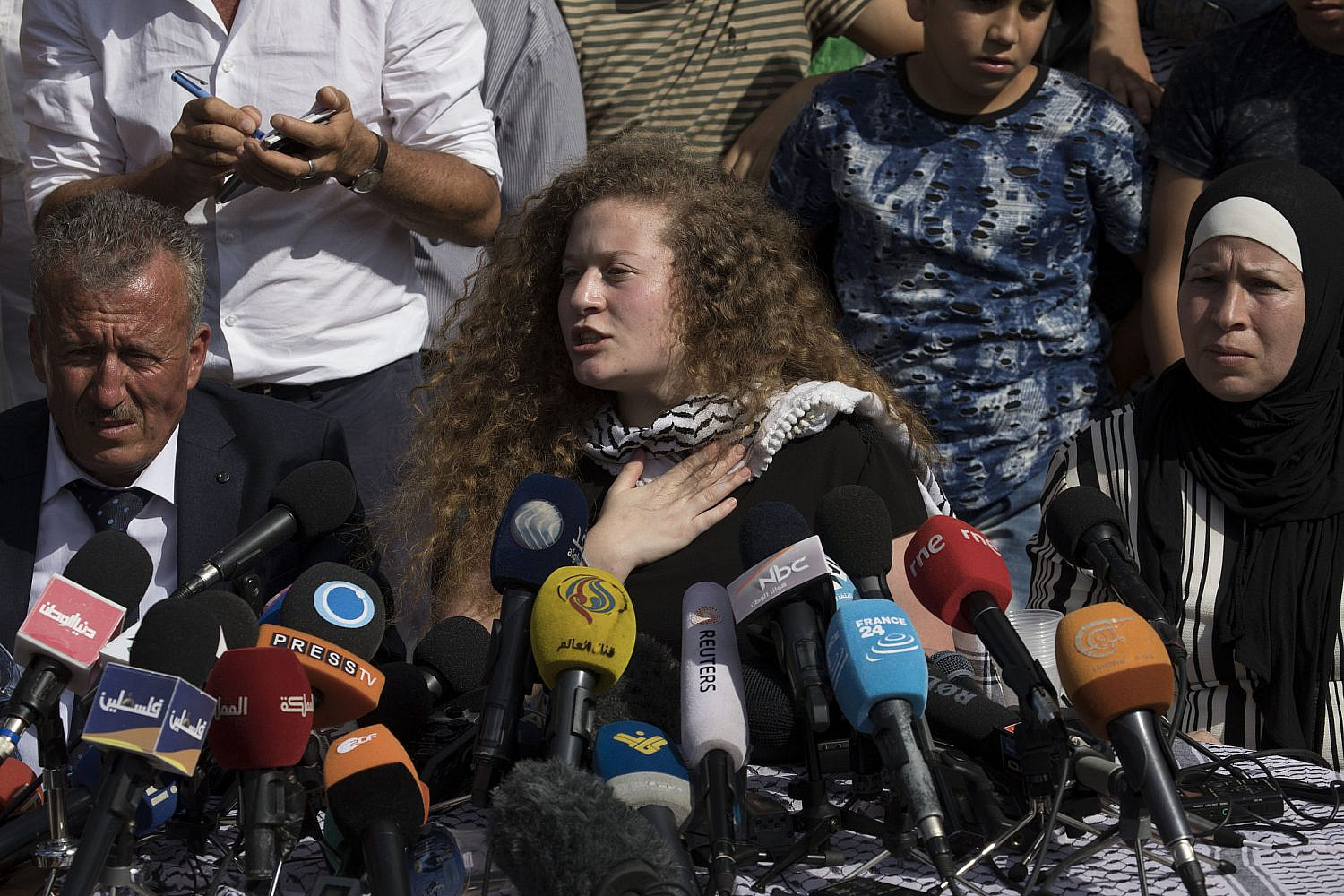 Ahed Tamimi with her family speaking to the press in Nabi Saleh, the West Bank, after her release from Israeli prison, July 29, 2018. (Oren Ziv)

Mr. President, we realize that the world still believes in the two-state solution. If there is a chance left for peace, then the path leading to it can only be through the Palestinian people and their legitimate leaders. Neither Arab normalization, the “Deal of the Century,” nor tepid pressure can impose any solution that neglects the rights of our people.

Mr. President, from Palestine, we invite you to embody the promise of freedom and to build a monument to justice and world peace. This peace begins with Palestine as the foundation on which to build from, as we strive to overcome the obstacles of the past and the demands of the present, and to cross the bridge of hope with optimism and confidence.

All I have left is peace.

Peace be with you and upon you.

Bassem Tamimi is a Palestinian community leader and activist with the Nabi Saleh Popular Struggle Committee. He was declared a prisoner of conscience by Amnesty International during his incarceration in Israeli prison in 2012. 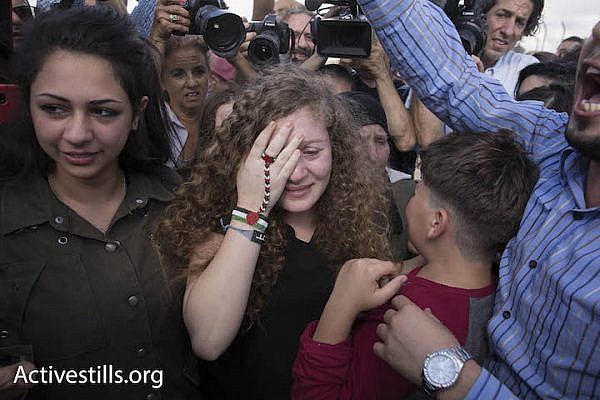 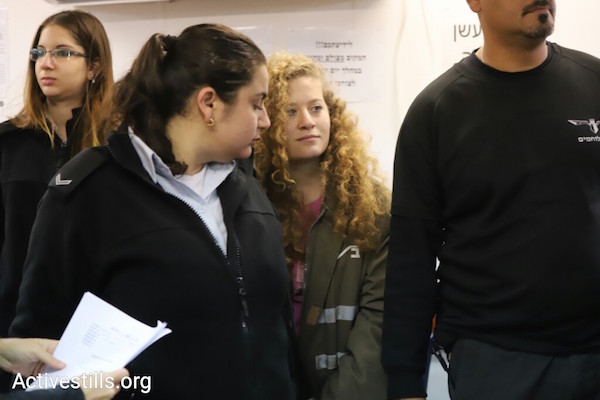 Journalists, diplomats kicked out of Ahed Tamimi’s trial
Despite Ahed Tamimi’s request for her trial to be open to the public, military judge rules that it will take place behind closed doors. By Oren Ziv Dozens of diplomats, journalists, photographers, and supporters arrived at the Ofer Military prison Tuesday morning for the opening hearing in the trial of Ahed Tamimi, the 17 year old from…
By Oren Ziv February 13, 2018