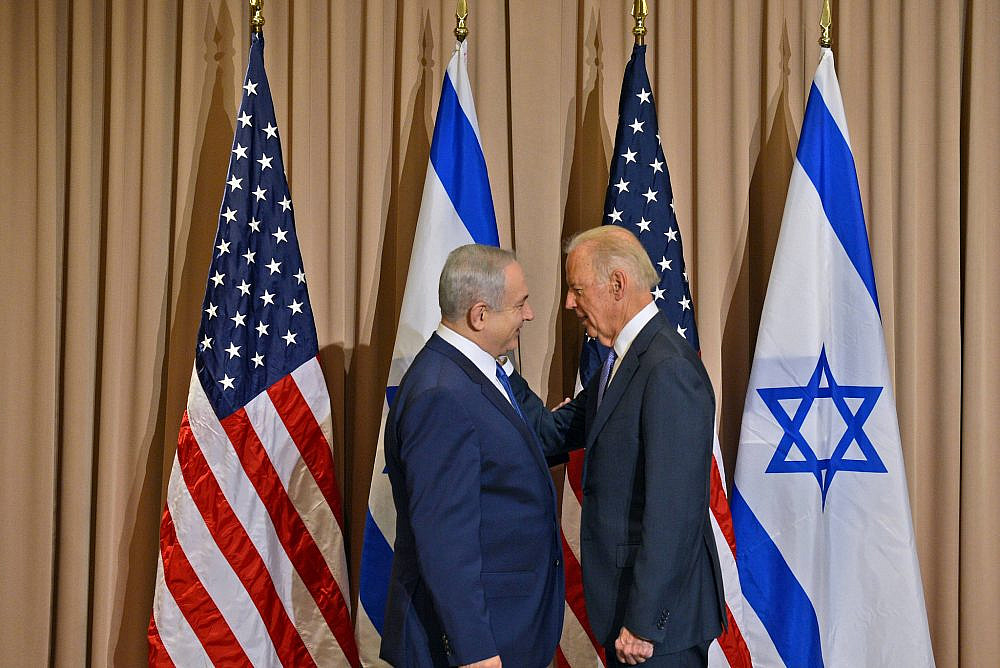 For a brief moment earlier this year, it looked like the Democratic Party was about to select a presidential candidate who would upend American foreign policy by conditioning U.S. military aid to Israel on its respect for Palestinian human rights.

But on April 8, after a string of devastating primary losses, Senator Bernie Sanders, who repeatedly denounced Israel’s occupation and “racist” government, dropped out of the Democratic race, leaving former Vice President Joe Biden, a stalwart supporter of Israel, as the party’s presumptive nominee.

Now, the Palestinian rights movement in the United States is confronting an old, familiar question: how do we engage with a Democratic presidential campaign that has never given us anything to praise, and much to criticize?

For the moment, there appears to be no firm consensus on the answer. Palestinian rights advocates across the board told +972 Magazine that they hold no hope of Biden becoming a vociferous critic of Israel, nor of their ability to have any major influence on his campaign or future administration. But they also say that they have no choice but to deal with Biden.

Some advocates say that pressure campaigns aimed at Biden have a marginally better chance of success than any campaign aimed at President Donald Trump, whose administration has shifted U.S. policy on Israel far to the right.

“There is a difference between an administration that openly and aggressively supports Israeli occupation and apartheid, as we have in the Trump administration, and one that purports to oppose such blatant injustice while effectively enabling it,” said Omar Baddar, a Palestinian-American political analyst. “When an administration professes a commitment to progressive values and human rights, it becomes more susceptible to pressure to live up to such values.”

Others are less convinced that progressive pressure can shift a candidate like Biden. They argue that the more effective path is to continue shifting public opinion in favor of Palestinian rights, and that eventually these changes will bubble up to the corridors of power. 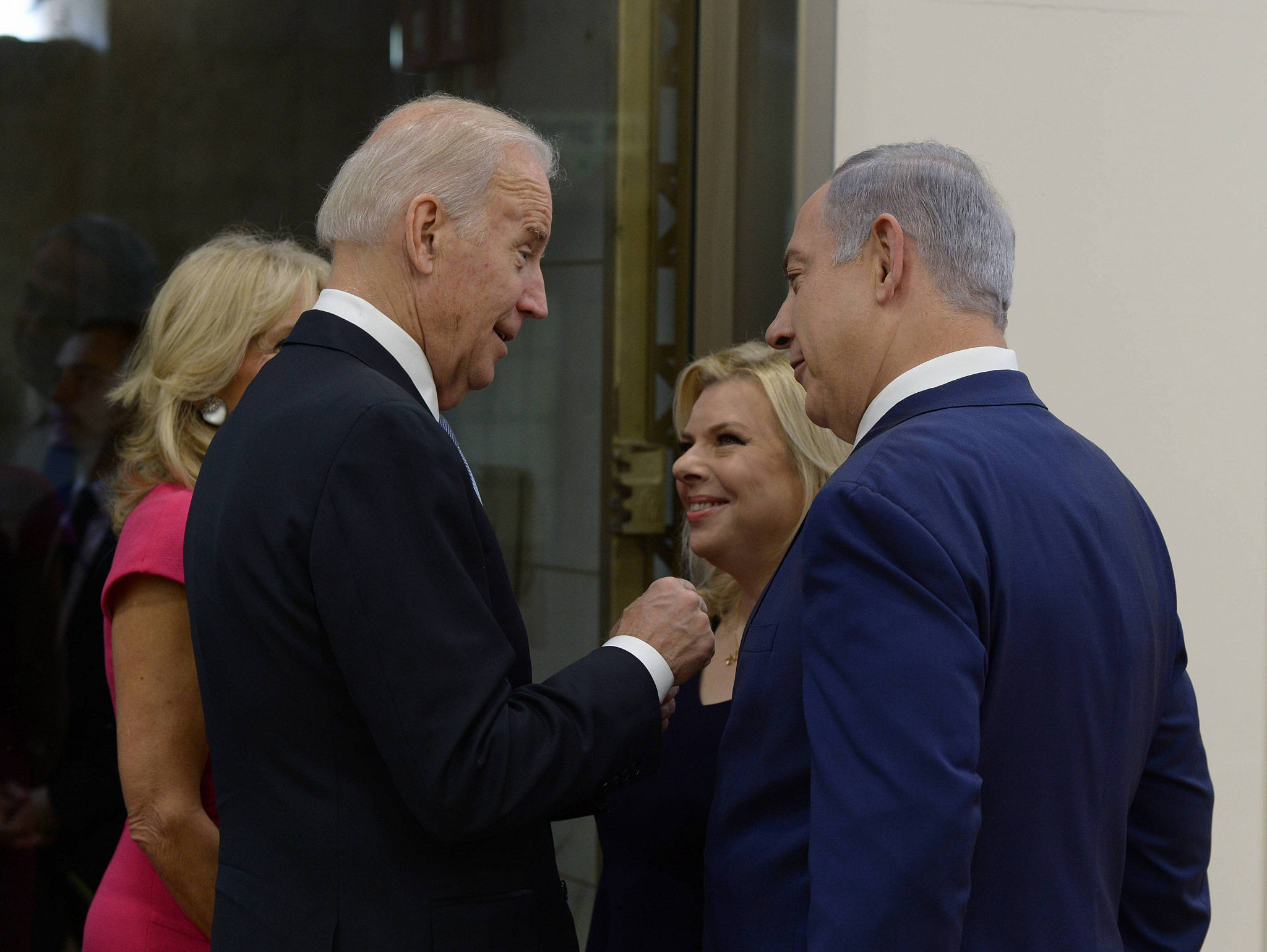 “We should be lobbying the Biden campaign, but [big change] is not going to happen,” said Jim Zogby, the president of the Arab-American Institute who was part of the Democratic National Committee’s executive committee for 16 years. “We’re building more allies in Congress. There’s more people ready to take stronger positions. But are they changing policy in the short term? No.”

The whiplash from the elation during Sanders’ brief time as front-runner in the Democratic race, to the malaise that many now feel, is a reflection of Biden’s long record of defending Israel in Washington, even as the state deepened its military occupation, expanded illegal settlements, and bombed the Gaza Strip. Biden is fond of saying “If there weren’t an Israel, we’d have to invent one,” and in a 2007 interview declared “I am a Zionist.”

As vice president to Barack Obama, Biden repeatedly undermined White House attempts to openly criticize Israel for its settlement project in the occupied territories. In 2009, for instance, President Obama reportedly told Jewish leaders that Israel wouldn’t move toward peace if the U.S. didn’t publicly criticize Israel. But Biden, however, privately and publicly contradicted that strategy. At a 2010 press conference alongside Israeli premier Benjamin Netanyahu, Biden said “progress occurs in the Middle East when everyone knows there is simply no space between the United States and Israel.”

On the 2020 campaign trail, Biden has said he opposes Israel’s West Bank settlements. But he also called the idea of conditioning U.S. military aid on Israel’s respect for Palestinian human rights “bizarre,” and said last week that he would not return the U.S. embassy from Jerusalem to Tel Aviv. (During the presidential primary race, Senator Sanders said he would not move the embassy back as a “first step,” but that such a move “would be on the table if Israel continues to take steps, such as settlement expansion, expulsions and home demolitions, that undermine the chances for a peace agreement”). 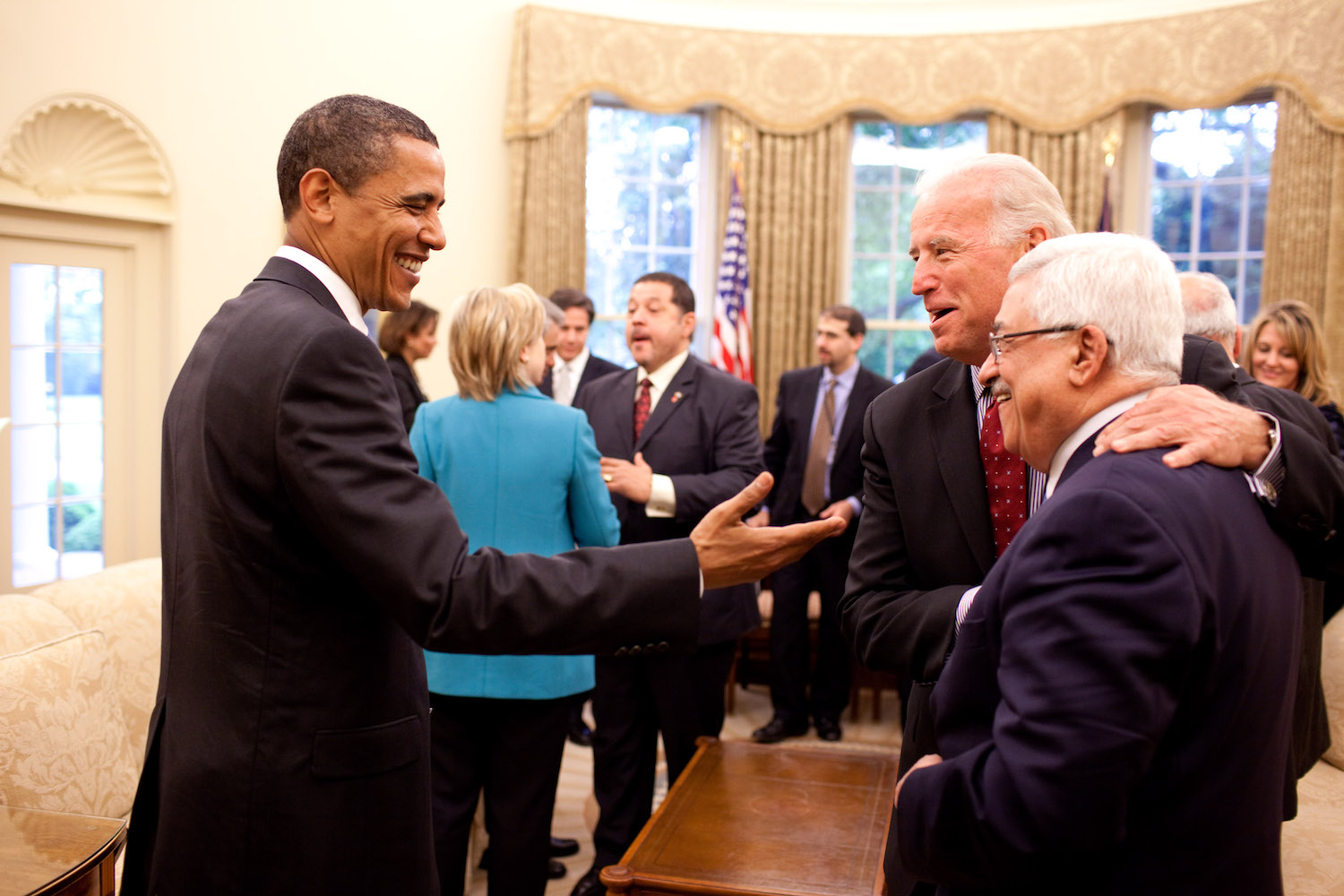 For the Palestine movement, Biden’s nomination is a throwback to an earlier era of American politics, when there was an overwhelming, bipartisan consensus on the need to support Israel no matter what the Jewish state did, which congealed following the 1967 war.

Today, there is a much more robust debate over Israel. American Jewish opinion is split over Israel, with more and more young Jews expressing outrage at Israel’s never-ending military occupation. Democratic members of Congress, backed by the broader progressive movement, are supporting bills that would bar U.S. military aid from being used by Israel to detain Palestinian children. Trump and Netanyahu’s tight partnership, a partnership followed by Netanyahu’s campaign against Obama’s nuclear deal with Iran, has produced further dissent in Democratic ranks. But that debate is nowhere to be found in the presidential race.

“Biden has had a long career featuring anti-Palestinian rhetoric and unwavering support for Israel’s oppressive policies. And when he does question Israel’s policies, it’s empty rhetoric combined with no consequences,” said Beth Miller, the government affairs manager for Jewish Voice for Peace Action, the electoral arm of the Palestine solidarity group JVP. “Our approach to the Biden presidency is not of hope that he’ll come in and positively impact the situation.”

Miller thinks that the Palestinian rights movement will have to try moving Biden from his unconditional support for Israel. But during the 2020 election cycle, JVP Action will not be focusing on the presidential race, she said. It is instead focusing on Congress, defending the movement’s allies like Rashida Tlaib, and backing insurgent progressives who have spoken out for Palestinian rights, like Samelys Lopez, a South Bronx community organizer running to become the Democratic representative for New York’s 15th Congressional District.

Congress is where the Palestinian rights movement has had the most success, Miller says, and Biden would have to contend with these legislators on policy around Israel. Assuming legislators like Rashida Tlaib and Ilhan Omar win re-election in their own races this year, Biden would have to deal with a small, but influential, bloc of Congressional progressives who want to ensure U.S. military aid to Israel isn’t used to abuse Palestinian human rights.

“We’re coming in a little bit ahead of where we were last time… We already have members of Congress who are openly calling to condition aid to Israel,” Miller told +972. “Biden is not a friend or ally to the movement. But he’s going to be operating in a completely different landscape.” 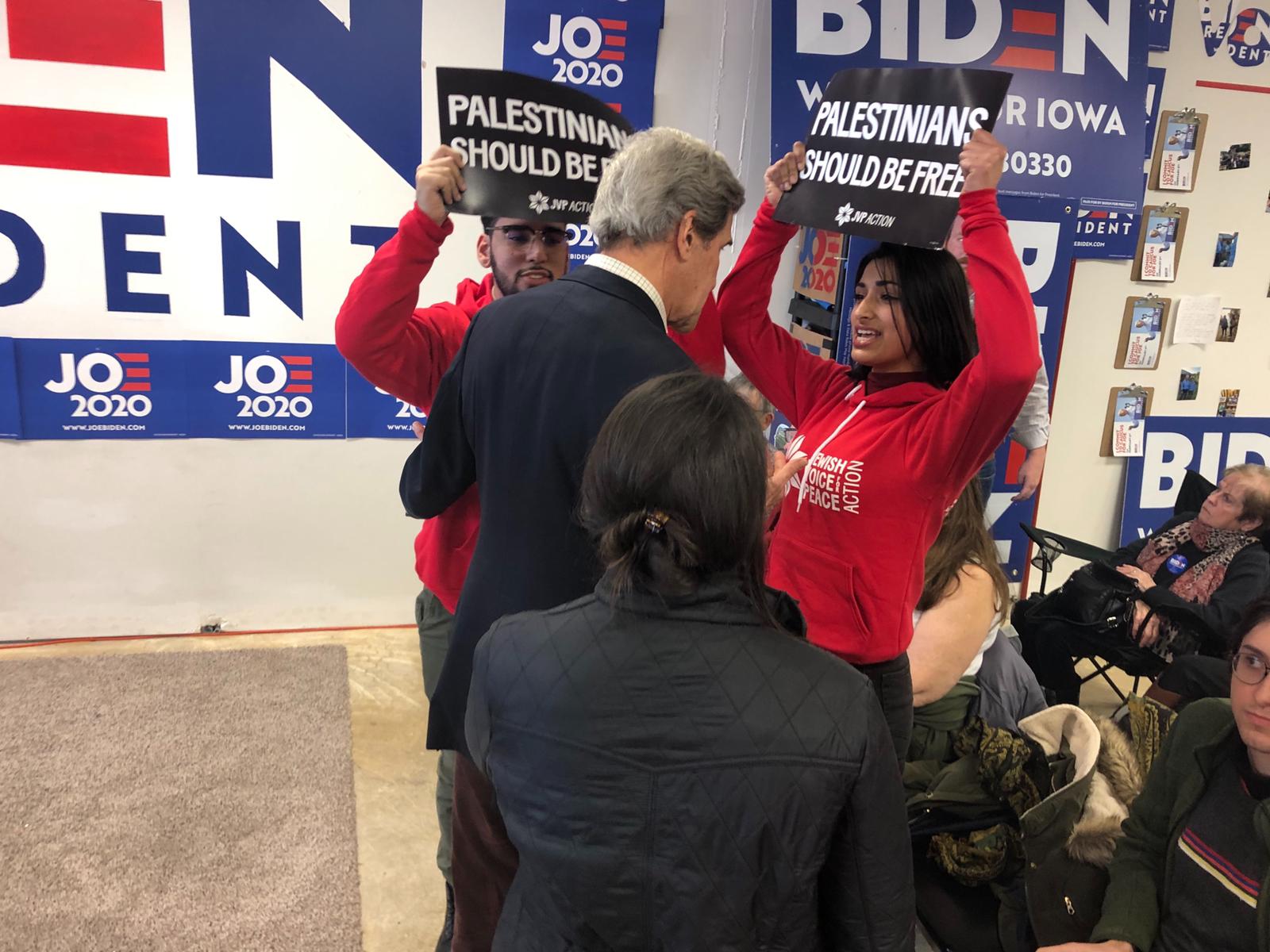 One preview of how a future Biden administration would approach Israel will come this summer, when Prime Minister Benjamin Netanyahu plans to move forward on annexing large swaths of the West Bank, including the settlements, to Israel.

Biden is facing pressure from members of the Democratic Party establishment to take a strong stand against the Israeli government’s plans. Last week, 30 national security experts who advised Democratic politicians such as Barack Obama, Elizabeth Warren and Pete Buttigieg called for the Democratic National Committee platform, which will be hashed out this summer during the party’s convention, to condemn Israeli annexation and support Palestinian rights. Zogby, who served on the 2016 platform’s writing committee, predicts the DNC will merely repeat their traditional support for a two-state solution, and not much more.

As for Biden, the strongest statement he has said so far is that it is important to press Israel “not to take actions that make a two-state solution impossible.” That is far from being enough for Democrats who want the party to take a more assertive stand.

“What we’re seeing from Biden is the bare minimum,” said Emily Mayer, national coordinator for IfNotNow, an American Jewish anti-occupation group. “The question can’t simply be how to return to some previous era, but how are Democrats moving forward in making sure everyone who lives in the region has equality and justice.”

Mayer and the broader Palestinian rights movement want Biden to go beyond mere words and spell out what consequences Israel would face if it annexes the West Bank.

But Noura Erakat, a Palestinian-American human rights attorney and assistant professor at Rutgers University, told +972 that “Biden is not going to do anything. We need to know that for sure.”

Still, Erakat agreed that pursuing the Palestinian rights movement’s agenda would be easier under a Biden administration.“We have to get Trump out of office in order to create enough room to do the political work that we want to do,” said Erakat. “[Biden’s] definitely a foe, but a foe under whose liberal administration gives a little bit more breathing room for us to organize effectively.” 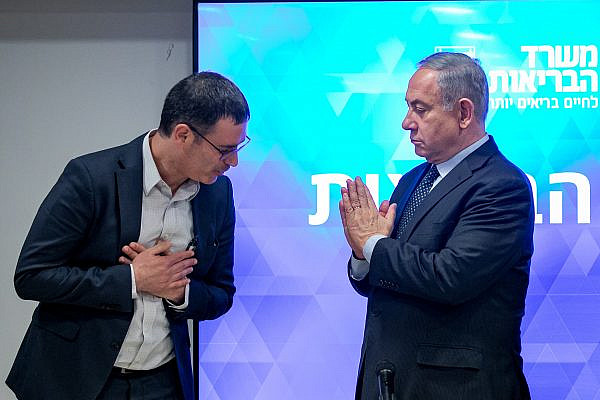 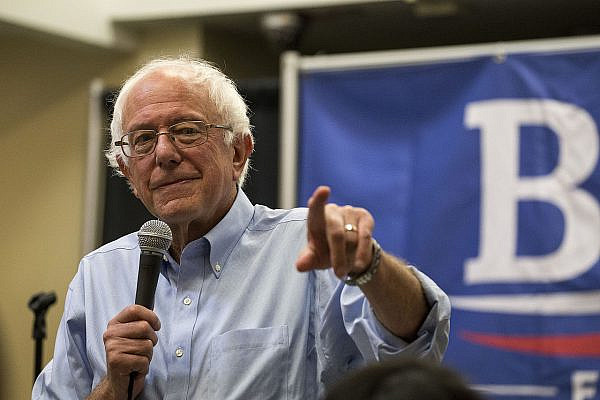 I’m Palestinian American, and Bernie Sanders has my vote
The movement behind Sanders will not only bring radical change to millions of Americans, but will ensure that Palestinian rights no longer go unnoticed.
By Nooran Alhamdan March 1, 2020 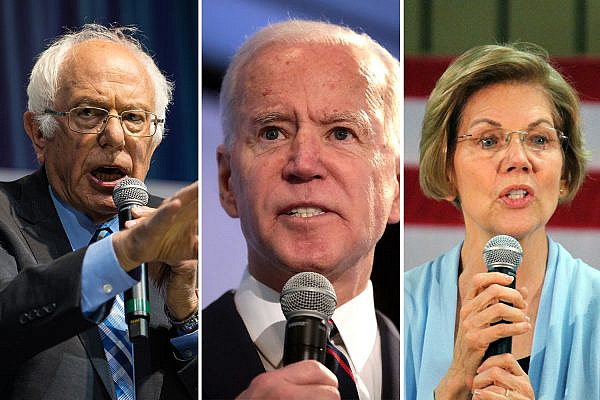