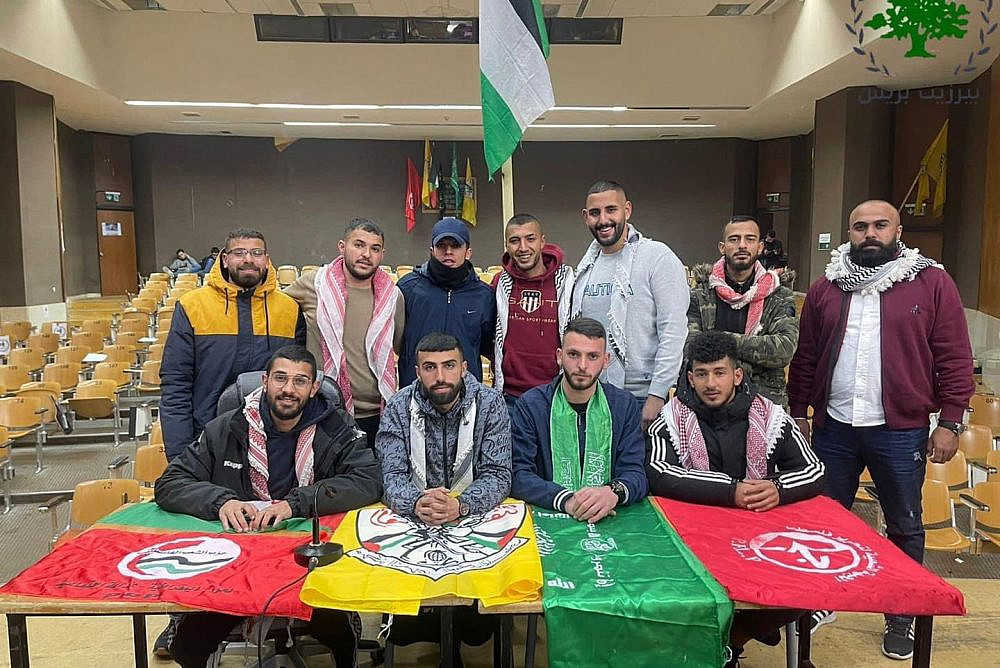 Birzeit University students involved with various political movements during a strike against the university administration's disciplinary measures against a Hamas-affiliated group on campus, February 2022. (Basil al-Adraa).

Palestinian students at Birzeit University in the occupied West Bank have claimed victory after a month-long lock-out strike for free speech on their campus.

The campaign began in mid-December when Al-Kutla al-Islamiyya (The Islamic Bloc), the student group affiliated with Hamas, sought to hold an event on campus celebrating the anniversary of the movement’s founding. They were denied permission on the grounds of COVID-19 safety, but the group proceeded with the event regardless. Several students, including the society’s coordinator, Ismail Barghouti, were referred to the university’s disciplinary committee.

To many students, the move seemed like yet another attempt by the university to constrain political organizing on its grounds, with particular ire directed at Dr. Anan Atteereh, the liaison between Birzeit’s student body and the university management. “She has been systematically persecuting political activity,” said Nadar Aweidat, who succeeded Barghouti as the coordinator of Al-Kutla al-Islamiyya. “She used to work for the Palestinian Authority security apparatus, so she’s suppressing [Hamas] activity at the university.”

The decision to discipline the group’s members drew protests jointly organized by all student societies at the university across the political spectrum, which included Islamists, leftists, and supporters of the ruling Fatah party. 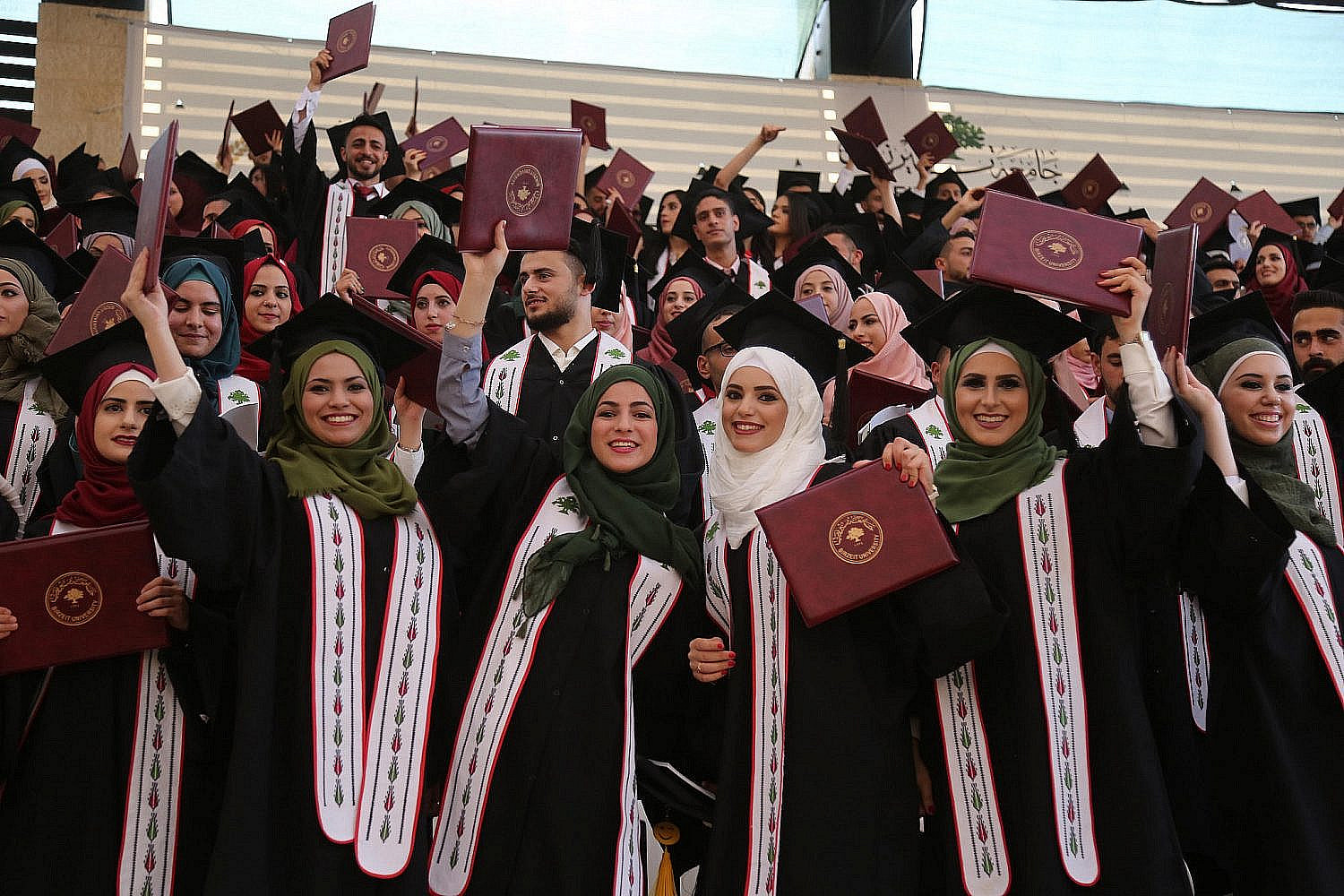 Palestinian students attend their graduation ceremony at the end of the academic year at Birzeit University in the West Bank town of Birzeit, near Ramallah, July 2, 2017. (Flash90)

“We put aside our differences as our goal was to preserve the strength of the student movement, protect our rights as students, and not allow anyone to control us,” said Raya Kashi, a media student at Birzeit and member of the Progressive Democratic Student Pole, which is associated with the Popular Front for the Liberation of Palestine (PFLP). “We weren’t going to let anyone close up the democratic space on campus,” echoed Rafat Sweiti, the coordinator for Shabiba, the Fatah-identified student group.

Birzeit University, located just outside Ramallah, is the only Palestinian institution of higher education in the occupied West Bank and Gaza that holds free and democratic elections to its student union, which is open to all student societies irrespective of political affiliation. At least six student political groups are active on campus; Al-Kutla al-Islamiyya and the Progressive Democratic Student Pole are classified by Israel as terrorist organizations due to their association with Hamas and the PFLP, respectively.

The last few years have seen a sharp uptick in arrests by Israeli authorities of students affiliated with these societies, including mass arrests of students active in the PFLP-affiliated group.

Al-Kutla has consistently won Birzeit’s student union elections every year from 2015 to 2018, until it was narrowly bested by the Fatah student group in 2019. No elections took place during the coronavirus pandemic in 2020 and 2021, but a new round is scheduled to be held sometime this year.

The recent tensions with management peaked when the Israeli army raided the Birzeit campus on Jan. 10 during one of the protests against the disciplinary decision, during which five students were arrested — including Al-Kutla al-Islamiyya’s Barghouti, who was shot and wounded in the raid. The army later claimed he was attempting to escape arrest. 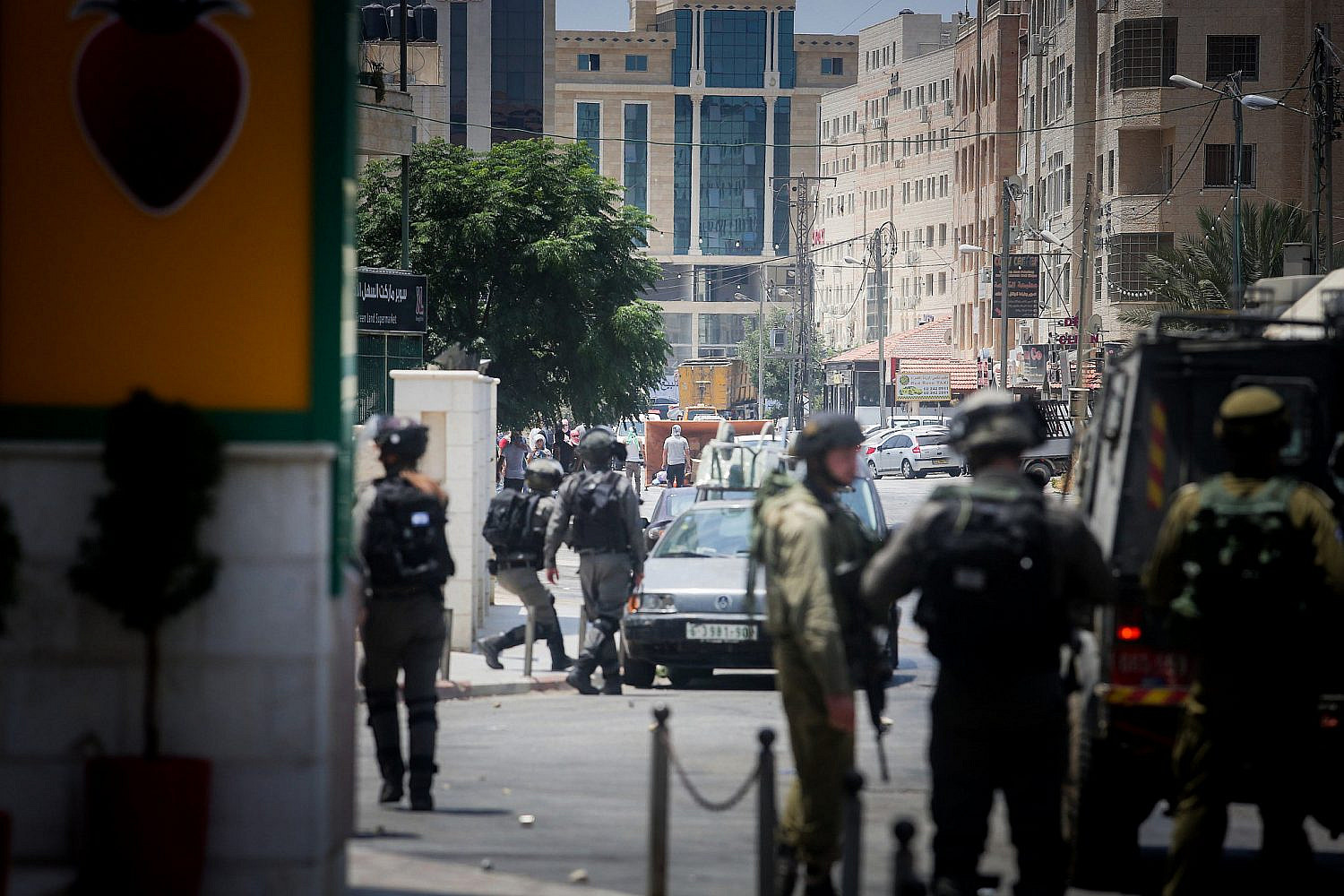 In the wake of the raid — which, to many on campus, served as a reminder of the close collaboration between the PA and the Israeli occupation — the student societies changed tactics and escalated their protests to a lock-out strike, with activists picketing the gates to the campus and preventing lecturers and students from entering.

During the strike, the organizers held workshops for students about their rights and their struggle with the administration, which “increased the students’ solidarity with us,” said Kashi.

“Students of the movements came from Abu Dis, Bethlehem, and other universities to show solidarity with us, and many families of prisoners and martyrs were also in solidarity with us,” she continued. “Our cause received great local media coverage, which made our case to the public and put more pressure on the university administration to respond to our demands.”

A month later, on Feb. 10, the liaison Atteereh resigned, stating that she was leaving because of the damage done to the university by the forced lock-out and because of her concern for its future (she declined to be interviewed for this report). The resignation was enough for the various student groups to call off the lock-out and resume the normal academic schedule. The university management then offered assurances that political activity on campus will not be restrained, and the students promised to avoid further disrupting studies and to respect university rules, according to a statement on the university’s Facebook page.

Sweiti praised the collaboration between all the political parties and societies, as well as the mass responsiveness of the student body who agreed to keep away from campus as part of the strike. “We stopped studies for 32 days,” he said, “and 16 students plus myself amped up the pressure in the last five days by going on hunger strike.” 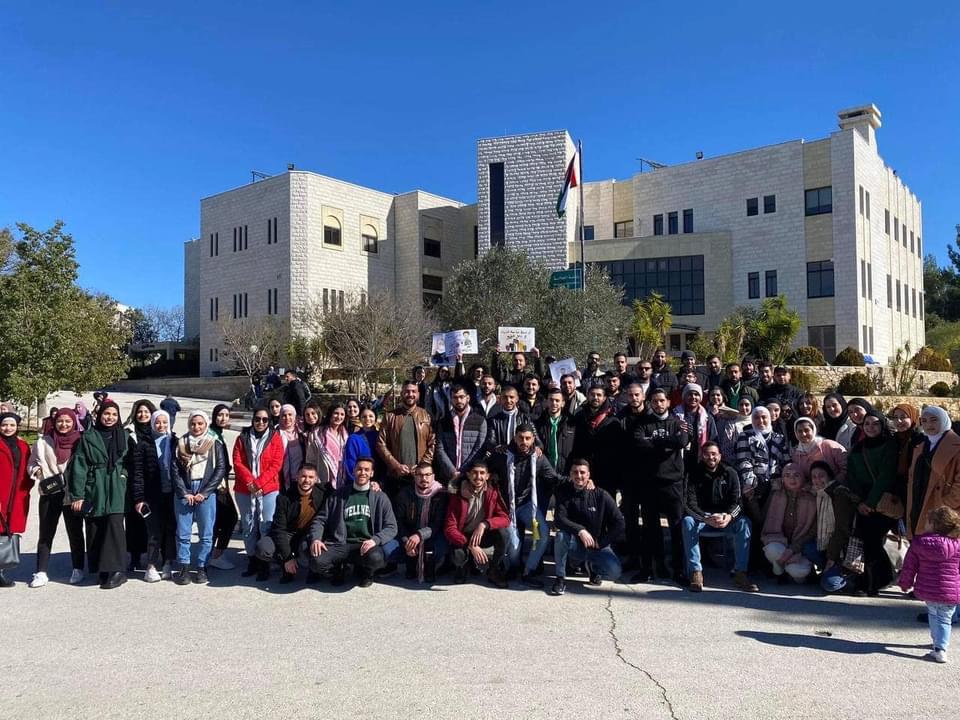 Birzeit University students during a strike against the university administration’s disciplinary measures against a Hamas-affiliated group on campus, February 2022. (Basil al-Adraa).

Ghassan al-Khatib, Birzeit’s vice president for advancement, says the university wants students who are strong both academically and in their political involvement and ability to engage with different opinions. “This is the reason why we insist on fully democratic elections and have historically allowed for protests and demonstrations on campus grounds,” he said.

“We as management pay the price for that freedom when students choose to strike,” al-Khatib added, “and we pay the price for that democracy when the army invades our campus time and time again to arrest students and sometimes also lecturers. On average, there have been some 60 students and staff from the university under arrest at any given moment in recent years, and we are doing our best to provide them with legal counsel.”

For the students, however, their democratic freedoms must also be protected vis-a-vis their own administrators. “The student movement is a red line, and we do not allow any faction to monopolize control or suppress other movements,” said Kashi. “… We sacrificed a month of our education and this affected us by delaying the semester, but we proved to everyone that we are strong and no one can break us.”