At first it was only Gaza. Now – it’s the West Bank. Bit by bit, without our noticing, the Israeli media has stopped reporting on the occupation. 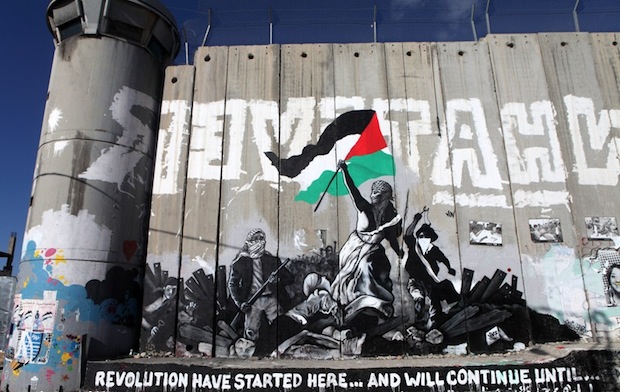 It’s been two weeks now that I’ve been wanting to write this post.

I wanted to write two Fridays ago, when it became apparent that two more West Bank villages – A-Diq and Qadum – successfully joined the cycle of popular resistance. Villages like Bil’in, Ma’asara, Ni’lin, Beit Umar and Nabi Saleh have already become known for their persistence in weekly demonstrations against the Wall and the settlements, but these two villages are relatively new to the popular and joint struggle.

For more than two months now, residents of A-Diq are protesting against continuing land grabs, which have cost them 4,000 out of 6,000 dunams (or 990 out of some 1,500 acres) over the many years of Israeli occupation. Qadum villagers are demonstrating against the prolonged closure of the only road that connects them to the rest of the West Bank. The road was closed by the Israeli army nine years ago, at the height of the Second Intifada, because – officially – it runs dangerously close to the nearby settlement of Qdumim. While the settlement keeps expanding to lands near the old closed road, Palestinians must travel difficult and long alternative routes to get in and out of the village. In both villages, dozens of people have been arrested or injured from army attacks on the demonstrators – yet no news of this reaches us at all.

I also wanted to write last Sunday, when a group of nine Israeli activists were arrested while stopping bulldozers from constructing the Wall near Al-Walaje. This small village on the outskirts of Jerusalem is slated to be surrounded by almost all sides, which will turn it into a horrible prison, detached from its agricultural lands. The activists, there in solidarity with the people of the village, were arrested for their non-violent resistance – yet no news of this reached us at all.

I wanted to write this post last Thursday, when dozens of Popular Committee activists gathered in Jericho for a “freedom ride“: an attempt to drive their cars to Ramallah on the fast lanes of the apartheid roads meant for Israelis only. Naturally, the convoy was stopped by the Border Police, and five activists were arrested, four of whom were later released. One is still detained. This was a classic civilian non-violent protest, which once again no one in Israel heard about.

I wanted to write about last Friday’s weekly demonstrations against the renewal of construction on the agricultural lands of Ma’asara and Um-Salamuna; about yet another hundred trees set alight by settlers last Saturday; about the sentencing of Bil’in’s Ashraf Abu-Rahma to six months in prison; about the 13 people arrested in the West Bank yesterday, including two brothers aged 16 and 19; and about the two people killed in an air strike on Gaza today.

I didn’t write about any of these things. I didn’t, because I found myself falling prey to the oldest trick in the book of journalism. I didn’t write because nobody else is writing about the occupation anymore, because it’s considered “non-news,” and better to write about something else: the struggle for social justice within the Israeli society, the economy, racism towards Ethiopian-Israelis, the Iranian bomb – anything but the occupation. Not that the occupation used to get even half the coverage it deserves, but now it seems that the little it got has disappeared. Like a person who wonders if it is the world that’s gone mad or he himself, I found myself actually wondering whether it’s at all important to write about the occupation.

But even worse, I didn’t write because I was afraid to bore my readers. I thought of the regular crowd that reads my posts on MySay and +972, I thought about my Facebook friends – and I feared that both groups would see the headline, tag it under “yet another Haggai Matar text about the occupation,” and move on. Why? Because the occupation, and all those people struggling for freedom and getting arrested and shot at, are just not interesting anymore. You know – “OK, we got the message, now move on.”

And then I saw this picture of a segment of the Wall around Bethlehem, taken by Anne Paq. A strong picture of a strong painting, which made me write all this down. Because there IS an incredible struggle going on here against a brutal occupation. It’s an occupation that can be dreadful, when it entails military campaigns and the killing of hundreds of people, and similarly dreadful when it creates the appearance of a peaceful routine. All the while, under its boot there are millions of people suffering, resisting, acting, speaking out and not giving up, in spite of the passing of years and the violent oppression used against them. Against it all they keep fighting for freedom, fraternity, equality and peace.

And if they manage to keep their struggle going, against all odds, we should do no less. We must go on publishing what the mainstream media doesn’t. We must tell these stories even if they do bore people, because they do mean something. We must go on resisting.