A new photo project focuses on the soldiers of Israel’s Border Police, the main military unit used to enforce the occupation of the Palestinians. Shot in various locations across Israel and the occupied Palestinian territories, ‘Black Labor’ looks at the points of impact where Israel’s elite pits black Jews against Palestinians. 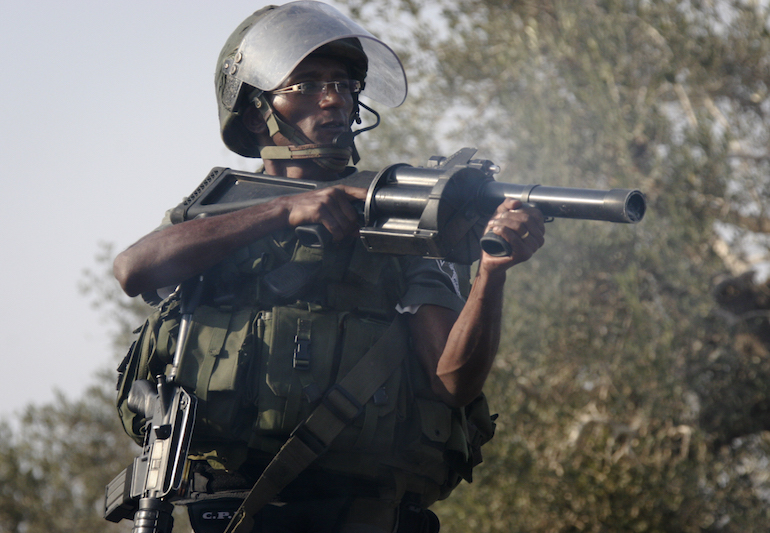 Mati Milstein’s “Black Labor” project reveals the face of the “Second Israel,” the antithesis of those Israelis who have always been viewed as the “salt of the earth.” When the parents of those photographed arrived to this country, the establishment viewed them as both morally and intellectually inferior — people who need to be re-socialized in order to become a part of the State of Israel’s moral regime.

Take, for instance, the first leaders of the Education Ministry. Back in 1945 Eliezer Riger, one of the foremost proponents of vocational education — and who would eventually come to head the Education Ministry — spoke of the need to separate Mizrahim (Jews from Arab and Muslim countries) and Ashkenazim (Jews of European origin): “Pre-vocational [education] leadership could bring a special blessing to the Oriental population, after all… the Oriental children, at least most of them, do not know how to appreciate simplified learning and cannot derive actual uselessness from non-practical education.” 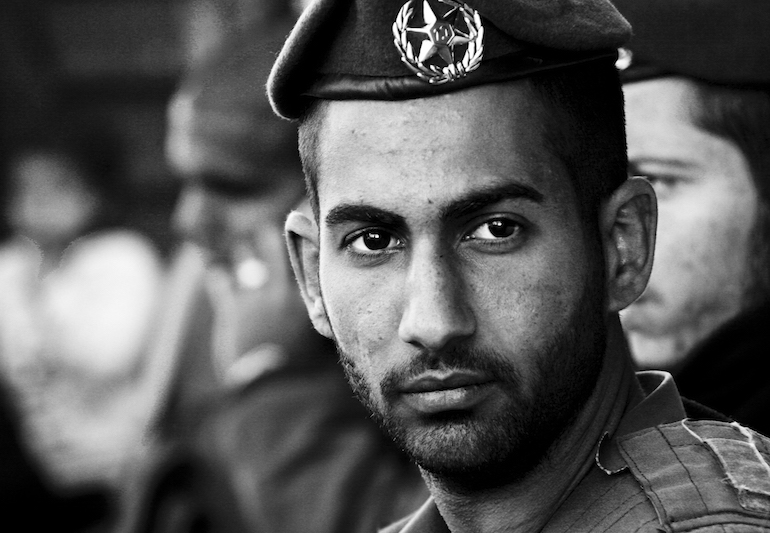 At the end the 1950s, the head of the ministry, Yaakov Sarid, said that the government must erect a “dam to prevent the storming of academic high schools by all elementary school graduates.” The State of Israel effectively prevented parents from sending their children to academic high schools. It continues to do so today. 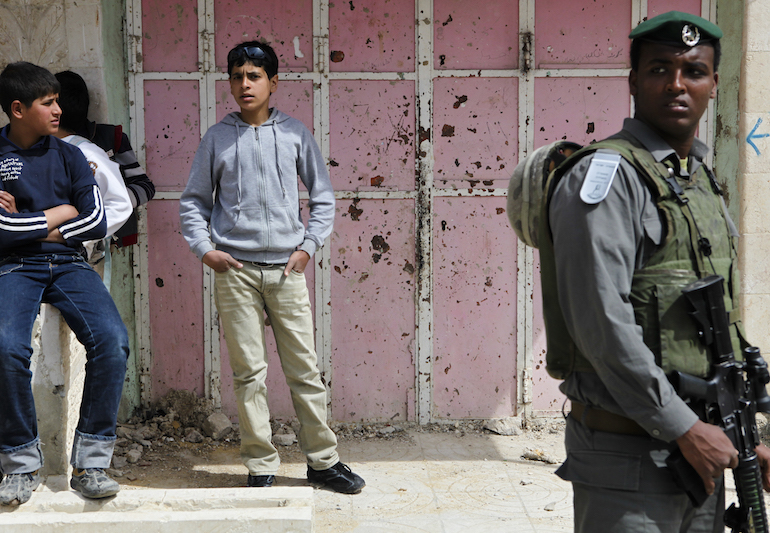 Meanwhile Ashkenazim spent their time in both separate educational frameworks and different military tracks. One does not need a photo series featuring the graduates of Israel’s Army Radio, as they appear on our television screens at nearly every hour of the day. The members of the”First Israel” — whether they are from the right, left, or center — speak proper Hebrew, do not sweat in the sun, are featured in gossip columns, and most importantly, are white. Very white.

Thus we are not speaking of an “invisible hand” that pushes all Mizrahi teenagers to enlist in the Border Police, while Ashkenazi teens are enlisted into Army Radio or any other unit that offers them a promising future after their service. This is the very same policy enacted by the Ashkenazi establishment that earmarks all the black labor jobs to Mizrahim and Ethiopian Israelis. 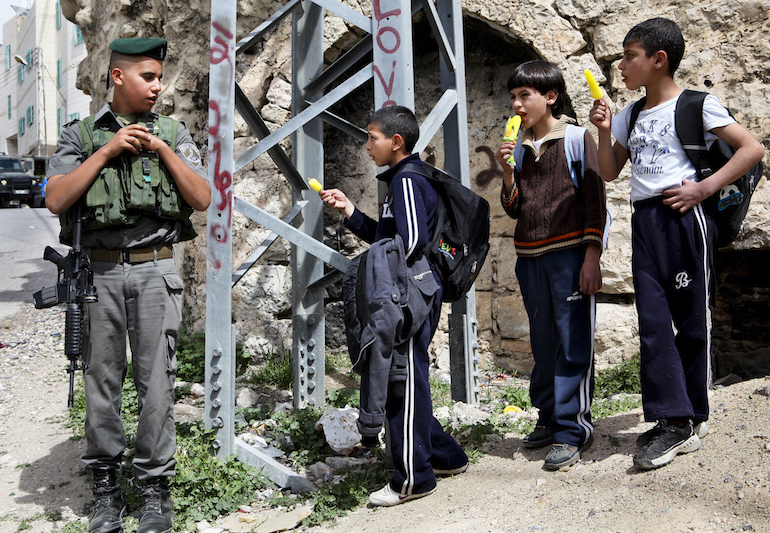 Milstein’s photos are a response to all those who claim they are “colorblind,” as well as those who carry the red flag of socialism. The correlation between class and ethnicity in Israel can be found everywhere — denying that correlation subverts any opportunity for real change. Thus in one of the photos we can see anarchist activists holding signs condemning the Border Police as “terrorists.” On the face of it, they look like a group of political activists taking part in a just protest. 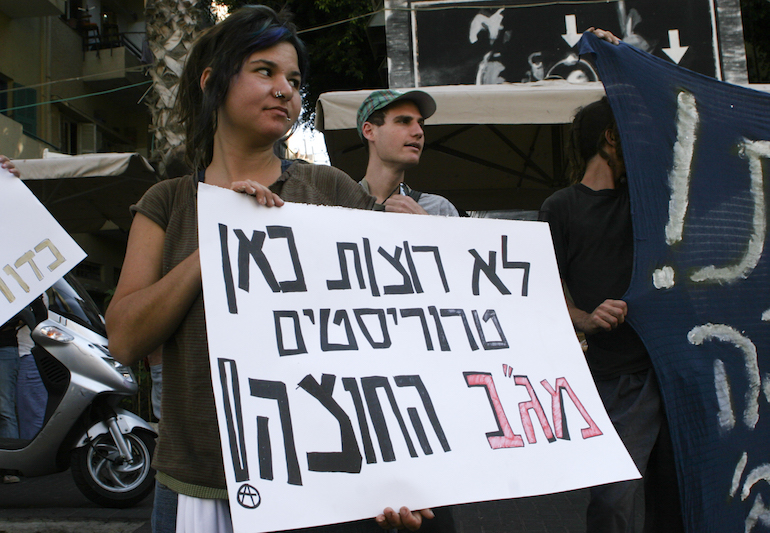 In reality, however, they are realizing the dream of David Ben-Gurion, calling the Border Police “terrorists” just as Israel’s first prime minister viewed Mizrahi soldiers as capable of rape and murder simply due to their ethnic origin. In 1950 he went so far as saying: “The ingathering of the exiles has brought us a rabble… we must educate the young man who has come here from these countries to sit properly on a chair in his home, take a shower, not steal, not capture an Arab teenager and rape her and murder her.” 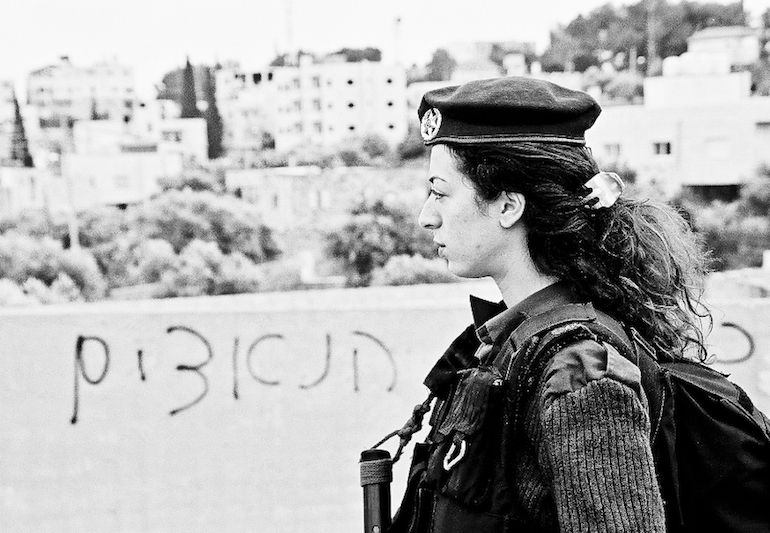 In a sense there are two main aspects to this kind of educational tracking. The path that was paved for Mizrahi teenagers to become the Zionist regime’s black laborers not only launched them into an inferior economic reality, it also housed them in Israel’s periphery and degraded their culture. Moreover, it cemented them as morally inferior. During the Eichmann trial, famed Jewish philosopher Hannah Arendt wrote the following: “My first impression. On the top, the judges, the best of German Jewry. Below them the prosecuting attorneys, Galicians, but still Europeans. Everything is organized by a police force that gives me the creeps. Speaks only Hebrew and looks Arabic. Some downright brutal types among them. They would obey any order.”

The irony is especially bitter when considering the context in which these words were written. The whitest man in room is being put on trial for obeying any order, but the framing of these events has yet to change.* Not only does Zionism necessitate a working class that will shoulder the burden of policing and maintaining order, it necessitates an underclass of moral inferiority. It necessitates a stable group that can be easily identified, and can be condemned and blamed for the ills of society. It is desirable to feel disgusted by a group of “brutish and uneducated Border Police officers,” who are diametrically opposed to “the beautiful ones.” This is how the disgusted can maintain his superiority. 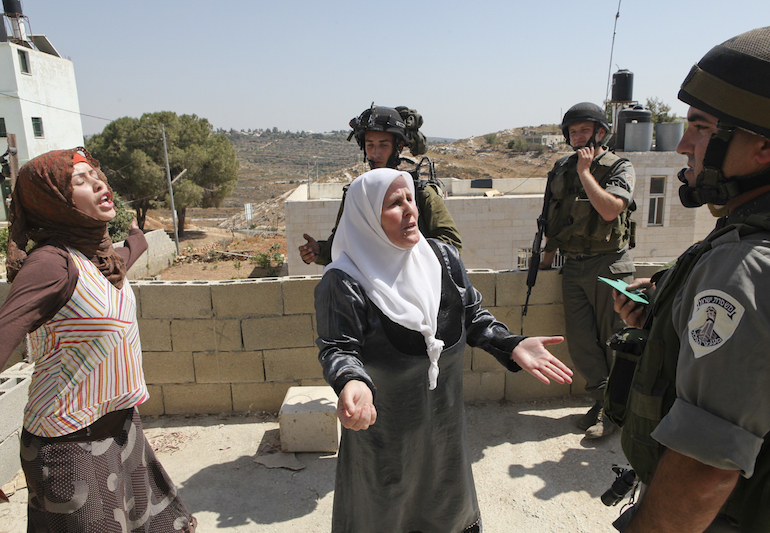 How comfortable it is to forget or turn a blind eye. But in the end, ignoring reality is impossible: one of the photos shows two Palestinian women confronting armed Israeli soldiers during just another day of military control in the West Bank. It looks as if they are saying to the soldiers, to the photographer, and to me: “These problems between you Jews, they are yours. What the hell do you want from us?”

*Thanks to Lihi Yona for providing her thoughts on Arendt

Related:
Stop blaming Mizrahim for everything wrong in Israel
Why Mizrahim don’t vote for the Left
The struggle for Mizrahi recognition isn’t limited to Israel

Mati Milstein is a photojournalist who has been documenting Israeli society and the Israeli-Palestinian conflict since 1998. Visit his website here. Tom Mehager works for Adalah – The Legal Center for Arab Minority Rights in Israel. This article was first published in Hebrew on Haokets.