For years they have served in high-ranking positions in the Israeli army, taking part in the most violent aspects of the occupation. Only once they leave do they suddenly discover that, perhaps, military rule isn’t such a great idea. 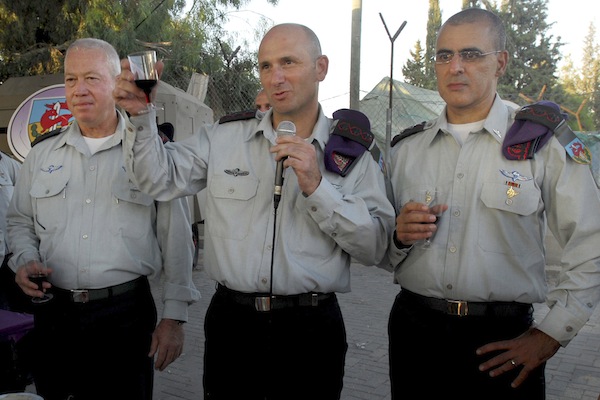 By now it has become a tired ritual: every once in a while a former high-ranking member of Israel’s defense establishment “wakes up” and discovers — to his and his supporters’ utter surprise — that over the past 50 years Israel has been maintaining a violent occupation over millions of people who lack basic rights. This week came Gen. Gadi Shamni’s turn to express remorse for his part in upholding the occupation, while getting his 15 minutes of fame. “We are the world champions of occupation,” he said at a glitzy conference at the Interdisciplinary Center Herzliya, promoting himself to the rank of “occupation champion,” no less.

The Israeli political discourse loves these kinds of expressions — the kinds of scandals that supply ammunition to every side of the inter-Jewish political map: the Right will become enraged over the politicization of the security establishment and the need to uproot the subversive elements that prevent it from “getting the job done.” Meanwhile the Left will hug its new star, who uses his storied past to legitimize his current positions. The Palestinians will continue to look on at the Israelis who have, for the past 50 years, been astounded to discover — time and time again — that the occupation exists.

This ritual repeatedly raises the question of why these insights arrive a moment after the army uniform comes off — not before. Personally I tend to believe it stems from a place of utilitarianism: as long as they wear the uniform, they have a clear interest to not see or recognize the crimes they are complicit in. They reap very real benefits from this type of blind spot: promotions, ranks, salaries, status. The “moment of clarity” also has its benefits: symbolic capital, prestige, etc.

It is possible that there are less cynical psychological explanations for the phenomenon, but that question is less important at the moment. We must not focus on the processes — psychological or social — which create these security-oriented “born again” peaceniks, but rather on whether they put their money where their mouth is. Okay, we understood that the occupation is immoral and that the army is the body maintaining the occupation. Now what?

Have a ‘meaningful’ service

It is astounding that all those who supported Shamni’s “brave words” have not come out in open support of conscientious objection. Some members of Knesset from the left-wing Meretz party, for instance, supported 19-year-old conscientious objector Tair Kaminer, and even tried to bring about her release. They, too, have refrained from openly calling for refusal, and Meretz does not take a position on the issue.

Having a “meaningful” service in the army continues to be a value worth upholding in the Zionist Left. But what is the meaning of a “meaningful” service in an army in which the higher you rise in the ranks, the more active your role is in the occupation? To enlist yet not excel inside the system? After all, even ordinary soldiers are complicit in maintaining the occupation and its crimes, as we can see from the trial of Elor Azaria, who shot and killed an immobilized Palestinian on a street in Hebron earlier this year. Should they excel and serve as a different model for military leadership? Gadi Shamni will be the first to admit that the army implements a policy determined by the government. So how can one translate his insights into practice without openly calling for refusal?

Last Thursday, on the first day of the new school year, the Council for Humanitarian Education sent out a letter detailing students’ educational rights. One of those rights was the “right to become convinced of the IDF’s morality in the run-up to mandatory service.” Despite the grotesque wording, one can assume that the intentions of the authors were positive: to grant the teachers and students the legitimacy to discuss the army’s morality.

This is a noble intention, but the authors of the letter, as well as Shamni’s supporters, have to honestly answer the following question: what happens if the students are not convinced of the army’s morality? Would this be a legitimate stance to take? If an ex-general, who spent much of his adult life in this organization, could not be convinced of its morality, are high school seniors who are about to enlist expected to do so? If so, are they not worthy of support among their close circles — from their schools to the political leadership — for their decision not to take part in this immoral organization, instead of looking back and lamenting the crimes they were forced to commit?