An Israeli bus driver refused to take Palestinian passengers on board, was ordered to do so by police, and took his revenge by forcing them off the bus at the entrance to a settlement. The bus company: “The driver acted exactly as expected of him.”

Tel Aviv Central Bus Station, Thursday, two weeks ago: a bus driver on the 286 line that goes to the settlement of Ariel refused to allow a group of Palestinian workers on board who wanted to get back home to the West Bank. After a short argument the driver called the police, asking for the Palestinians to be escorted away from the door of the bus. A policewoman who arrived shortly after talked to the would-be passengers, and then told the driver the Palestinians all had valid permits to be in Israel, all went through security checks at the entrance to the station, and that he therefore must allow them on the bus. 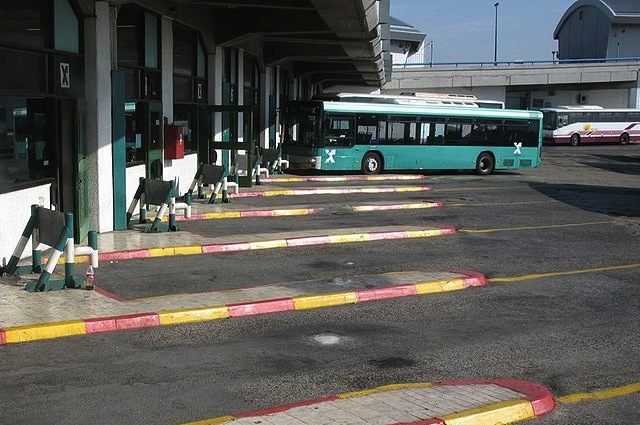 “The driver told her she was wrong and took her name and badge number so that all guilt would be on her head, and also said that he would drop them off half way, but the policewoman insisted,” says Neria Mark, a passenger who witnessed the scene. “Eventually he let them on, and even took some more Palestinian passengers outside the station so the bus became quite packed. The great heat and the Ramadan fast made many of them fall asleep, and so we drove on.”

However, when the bus reached the industrial zone outside the settlement of Barkan the driver called the guard at the gate, and had him order all the Palestinians to get off the bus. Two people who were accidently missed were ordered off by another guard at a later point along the route. “They all went down without a fight, some protesting verbally against the treatment and reminding both the driver and the guard that they’re fasting. All this time one of the passengers was encouraging the driver to do this ‘cleansing’, and once the deed was done the driver told him: ‘That’s the only way they’re going to learn. Anyone who boarded the bus today won’t dare to do it again.'”

According to Mark, from that point on the driver didn’t make the stops where Palestinians were waiting along the road. In a letter she later sent the Ministry of Transportation, Mark wrote that “the driver’s behavior was racist and in violation of the policewoman’s orders. He humiliated people just in order to teach them a lesson.” 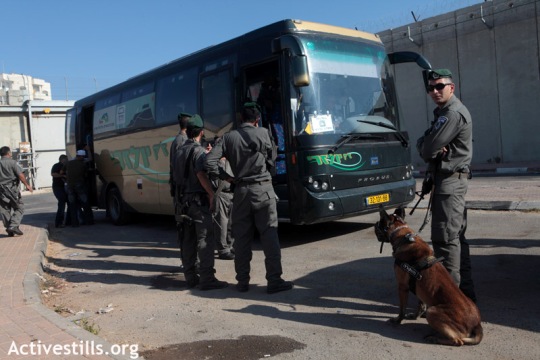 The law requires drivers to take Palestinians, but makes it impossible at the same time (Activestills)

In the bus company where the driver works, however, nobody seems to see anything wrong with this story. “The driver acted exactly as expected of him,” says Ben-Hur Akhvat, CEO of Afikim. “The official policy is simple: anyone who can pay the fare can go on the bus. This means we have no choice but to also take Palestinians on board in Israel and drive them to Judea and Samaria, even though it always causes problems with the Israeli passengers, and both sides start verbal and physical slights with the other.”

According to Akhvat, any driver in the company has the mandate to decide that Palestinians look suspicious and call the police, but has to obey the police as the driver in this case did. “Inside Judea and Samaria the case is different, as Palestinians are not allowed inside the Israeli settlements without a permit by local security and an armed guard even if they do have an entrance permit to Israel, so the driver did the right thing in forcing them off. Every now and then Palestinians fall asleep on the bus and get unnoticed, and when they wake up at the last stop inside Ariel we have to call the police to show them the way out.”

Akhvat also wishes to remind us that army orders forbid Palestinians from entering or leaving Israeli borders through the same checkpoints as Israelis. “These people are supposed to go only through the Eyal checkpoint. On their way in they don’t have a choice, but on their way back they make it easier on themselves by taking our buses through the Cross-Samaria Checkpoint which is only meant for Israelis. Unfortunately we are not authorized to enforce the law they are violating.” Akhvat also mentions that the company regularly receives complaints from Jewish passengers who don’t wish to see Palestinians on the bus. “We are in ongoing negotiations with authorities regarding a possible alternative solution to the problem,” he says.

Mark is unsurprised by this. “After I got to Ariel, all stunned, I was picked up by Palestinian friends from Nablus and told them the story. They all just nodded, and treated it as the most natural thing in the world. They think it’s normal, but I think there’s nothing normal about this reality.”

Police: Palestinians allowed on buses. Settlement: True, but not inside settlements

The IDF Spokesperson response is that the issue does not fall under military jurisdiction. An army source adds that there is no regulation forbidding Palestinians from riding on Israeli buses. The Tel Aviv Police says that the policewoman acted appropriately and that there is no regulation that forbids drivers from taking Palestinians on board. The Ministry of Transportation corroborated this.

“IDF regulations forbid Palestinians from entering industrial zones and settlements unless they have a specific working permit for that place,” says the spokesperson for the Samaria Regional Council. “This is why guards are placed at the entrances, to keep people out, including passengers on public transportation. A permit to enter Tel Aviv does not allow a person to enter Barkan. The Barkan industrial zone has some 3,000 Palestinians working there, entering it daily with the required security permit.”

It’s interesting to see how everybody’s right in this story. The official state bodies – ministry, police and army – all stick to the dry question of whether or not Palestinians are allowed on the bus in Tel Aviv. The answer here is indeed yes. But the people who have to live daily with the reality of occupation – Palestinians and the settlers (including the bus company, which has its headquarters in Ariel) – expose the deeper layers of Apartheid: the separate checkpoints for different people, the racial profiling security system, the permit regime, and the route of the bus which is planned only for Israelis.

This story was originally published in Hebrew in Zman Tel Aviv and NRG, and is based on Neria Mark’s report in MySay.