Talkbackers call Anat Kamm, who was sentenced to four and a half years jail time and 18 months’ probation, a “traitor” and say she should spend life in prison, reflecting Israel’s march to the right. And though it seems as though Kamm’s case has come to a close, questions remain. 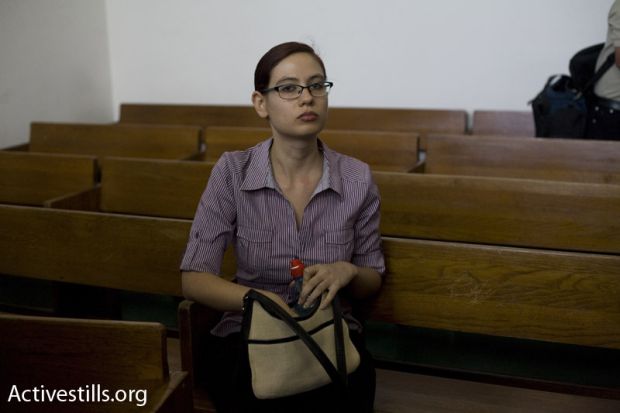 Sunday morning, Anat Kamm—the former soldier who leaked classified documents to Haaretz reporter Uri Blau—was sentenced to four and half years in prison and a year and a half of probation. This is in addition to the two years Kamm already spent under house arrest.

I think that you all heard in the court how severely we view this case. The court also viewed it severely [and] mentioned the danger in the documents. The sentence needs to be taught in every school and the army’s basic training so that every soldier who thinks of leaking some classified army document will be careful because this is the punishment that he can expect…

The judges also seemed to hold Kamm’s case up as a potential warning to other soldiers who might consider leaking information in the future, remarking during the sentencing:

If the IDF cannot fully trust its soldiers, it will not be able to function as an army…The transfer of documents while violating basic duties constitutes a violation of the most severe criminal norms.

While her defense attorneys initially portrayed Kamm’s move as an act of patriotism, calling Kamm a “mainstream, Zionist, Israeli girl, the salt of the earth,” Kamm herself has since chalked up the move to “stupidity.”

Much of the Israeli public considers Kamm a traitor. Talkbacks left on Hebrew-language websites called her a “traitor,” said the “light sentence” was “a shame” to the state, and overwhelmingly called for a harsher punishment. One reader commented that she should receive 100 years sentence; some called for a life sentence; and others called her an “enemy within.” Some decried her as a “left winger”—a word that has become increasingly synonymous with “traitor”. Another wrote:

Anat Kamm is proof that the extreme left is dangerous to state security.

Some of those who left talkbacks also criticized the judges, saying that the “light” sentence caused them to lose faith in the justice system. One remarked:

Friends, the time has arrived for us to organize a protest against the court.

The comments seem indicative of the overall mood in the country, which has shifted to the right in recent years.

While Kamm’s sentencing might bring a sense of closure to the case, many questions remain: how did Uri Blau’s report on the targeted assassinations of Ziad Subahi Mahmad Malaisha and Ibrahim Ahmed Abd al-Latif Abed pass the military censor in the first place if it was, indeed, dangerous to state security? What made the Israeli army change its mind about the story and the information it contained? Is it appropriate for the army to give a green light to an article, only to backpedal on this decision later and to go after both a journalist and his source? How can journalists operate, freely, in such an environment?

Throughout the Kamm-Blau affair, another issue has been largely forgotten—two men were assassinated by the army in circumvention of a Supreme Court hearing. This raises additional questions, of course: is it appropriate for the army and the state to consistently ignore Supreme Court rulings? What does that disregard say about the health of Israeli democracy? Again, what are the implications for the freedom of press?

And while the prosecutor called the leaked documents “dangerous,” she failed to mention the danger of an army that seems to answer to no one, not even the Supreme Court.

With the country continuing its march to the right, none of these issues will go away any time soon. But, as journalists and potential sources feel paralyzed and anti-democratic trends continue, the ability to ask such questions publicly could disappear.