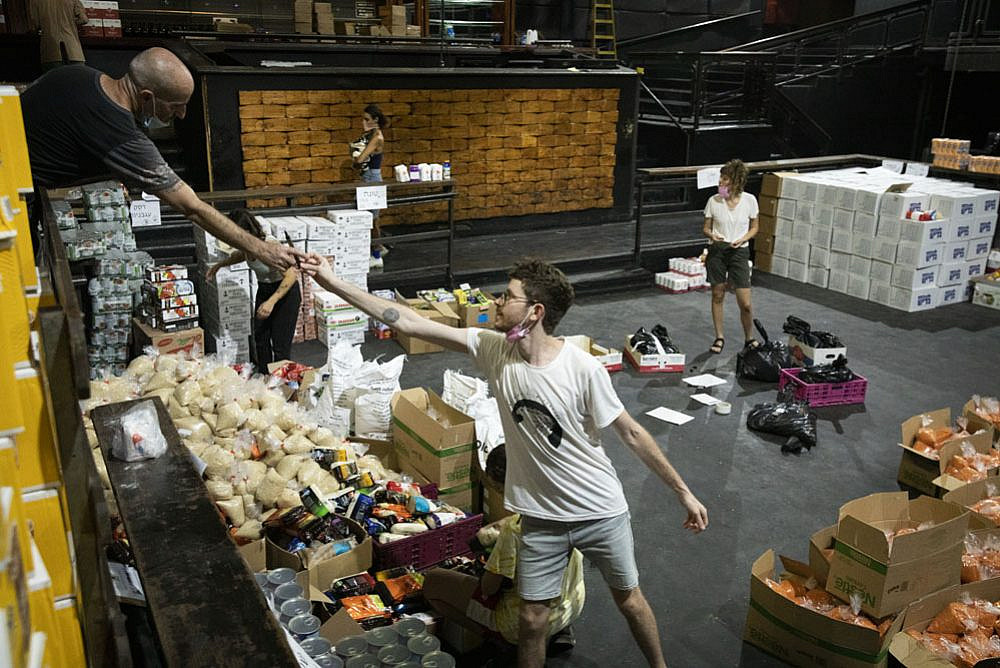 Israelis take part in the ad-hoc 'Culture of Solidarity' group to prepare food deliveries for the second lockdown for underserved and impoverished communities across Israel, Tel Aviv, September 16, 2020. (Oren Ziv)

When the coronavirus first struck Israel-Palestine back in March, Prime Minister Benjamin Netanyahu declared a war on an “invisible enemy.” Night after night, Netanyahu appeared on our screens announcing drastic measures taken by the new “unity government” to fight and contain the pandemic.

The directives were in part draconian, including the mass surveillance of the population by the Shin Bet, Israel’s internal security service, and broadening the state’s authority to make arrests. The government put the country under total lockdown bringing it to a standstill, while economic anxiety and fear for our health pervaded every aspect of our lives. Within weeks, COVID-19 infection rates plummeted.

This happened because many believed, at least for a moment, that despite the deep-seated divisions, when it comes to a pandemic, the government still had the public’s best interests at heart. 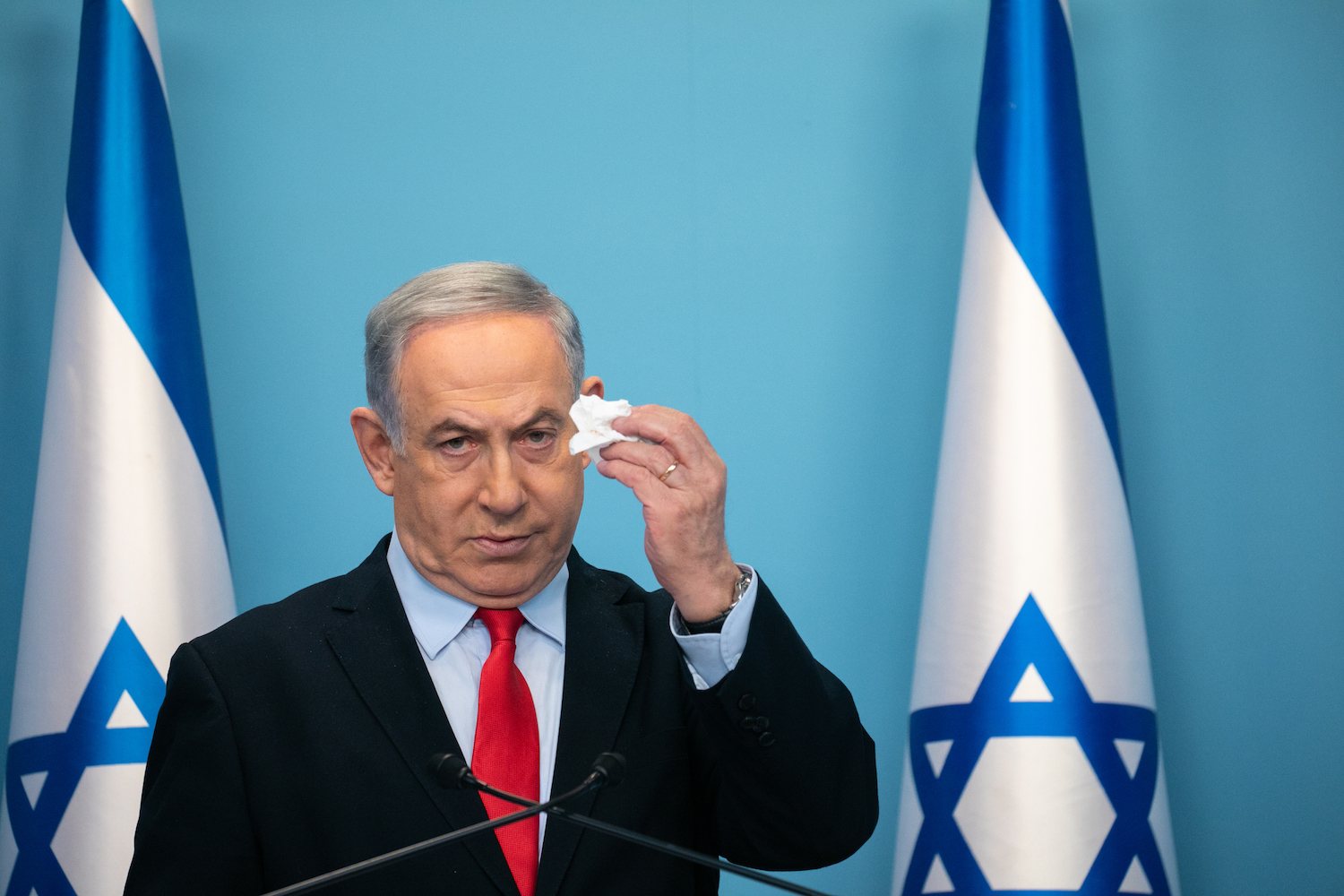 We were wrong. The country began re-opening and Netanyahu, who gloated about defeating the virus, deftly returned to what matters most to him: deflecting from his corruption cases and ongoing trials to stay in power. No longer was Israel’s wrecked economy or public health at the top of the agenda. The prime minister was now onto bigger and better things: trying to annex parts of the occupied West Bank, signing the so-called peace accords with the United Arab Emirates and Bahrain, and delegitimizing the burgeoning protest movement demanding his ouster.

But the return to “normalcy” happened far too quickly and without any oversight. Israeli politicians, instead of building trust with the public while establishing firm policies, pandered to their respective constituents and let the virus spread. The infection rate started to rapidly climb once again, only this time, the government stood back and watched the country reach the precipice.

To say our leaders failed to contain the pandemic would be giving them far more credit than they deserve. Political infighting, a total disregard for expert opinions, and an unquenchable thirst to remain in power have brought us to the brink. Even something as basic as locking down the cities and towns hardest hit by the pandemic was quashed and replaced by an ineffective night curfew. Perhaps, like Trump, our leaders just thought this would somehow all go away. 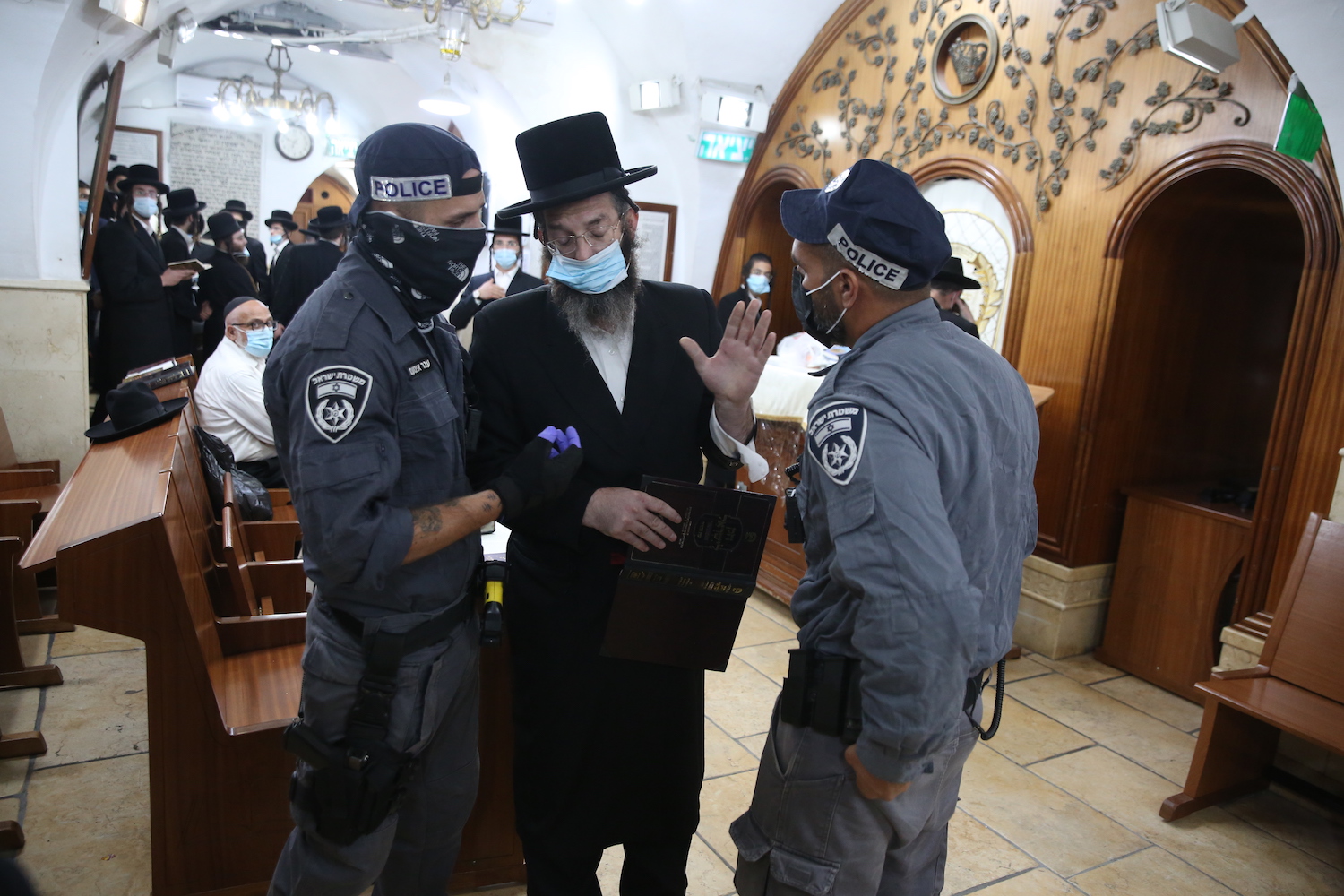 Police scuffle with ultra-orthodox Jewish worshippers at a tomb in the Israeli town of Meron, after prayer services had been largely restricted during a nationwide lockdown, September 24, 2020. (David Cohen/Flash90)

It didn’t, and today Israel went into a second total lockdown. Netanyahu is already talking about declaring a national emergency that could potentially allow him to consolidate even greater power. According to business paper Calcalist, only 27 percent of Israelis trust Netanyahu (as opposed to 56 percent before the pandemic). Ronni Gamzu, Israel’s coronavirus commissioner, has called the idea of another lockdown “miserable” and “disgusting.”

And all this from a government that came into existence for the stated purpose of uniting to fight COVID-19. They literally had one job.

Walking around Tel Aviv these past few months, the number of shuttered businesses makes some parts of the city feel like a ghost town. A bottomed-out economy and soaring unemployment have exposed the fragility of the neoliberal state Netanyahu has helped build here for much of the past two decades. Working class Israelis and Palestinians will continue to bear the greatest brunt for the government’s indifference. 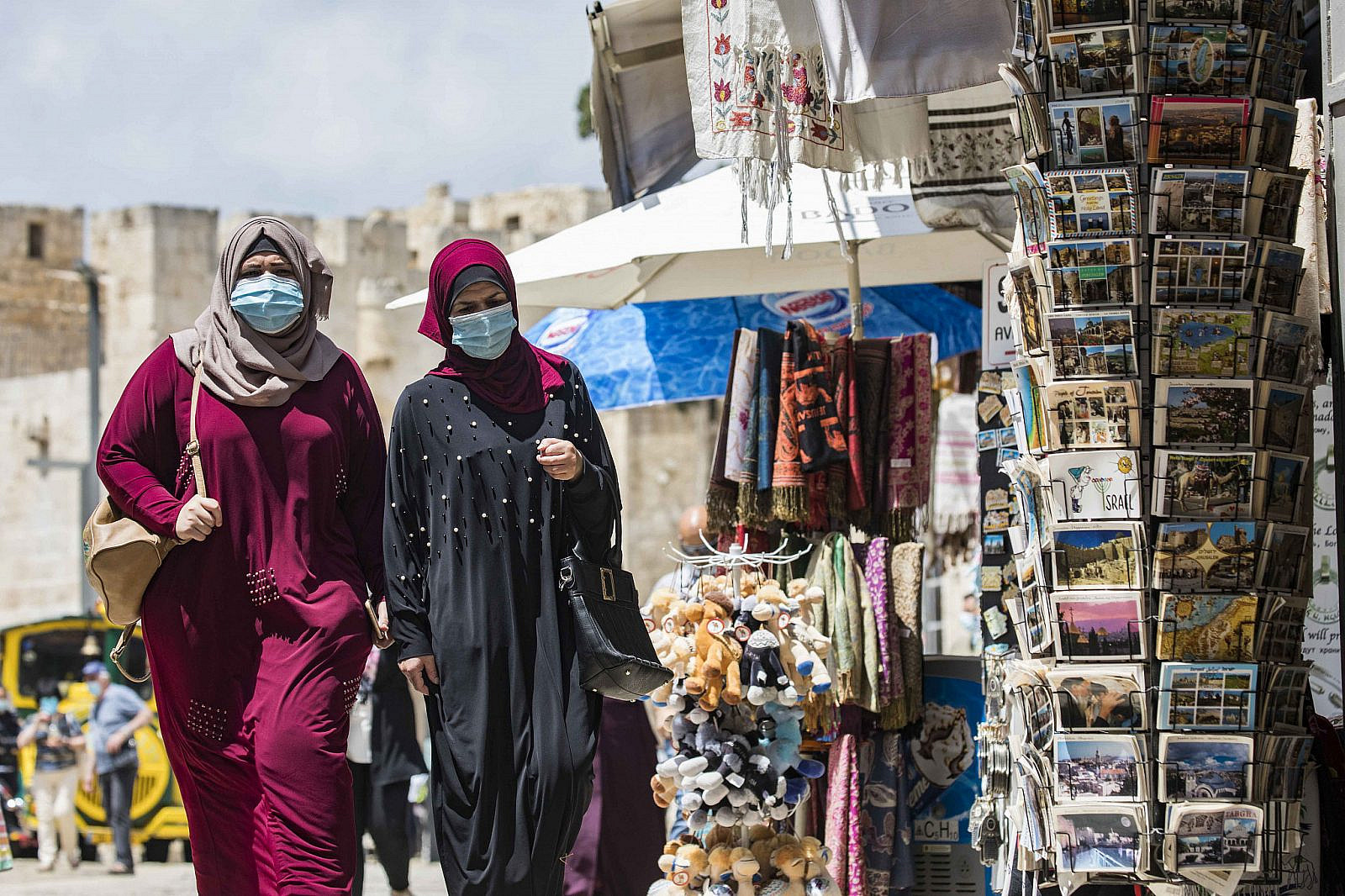 Moreover, Israel’s failure to conduct Arabic outreach and include Arab experts in its fight against the pandemic has made it harder to stem the spread in Palestinian towns inside Israel. So far the crisis has been managed by teams that have almost entirely excluded women or representatives of the various communities living here, as well as representatives from relevant offices such as the Education and Welfare Ministries, respectively.

Instead of building trust with the public while spending money on health and education to combat the virus, the government continues to treat the pandemic as a rolling threat to our national security. Rather than putting together a diverse task force of experts on public health and welfare, it enlists the help of the Israeli army and security experts who have imported the same mindset and tactics used in the occupied territories into Israel.

Treating COVID-19 as an enemy to be defeated may have worked in the first weeks of the crisis, but the fight against the virus won’t be won by treating it as a foe that can be defeated through military force. 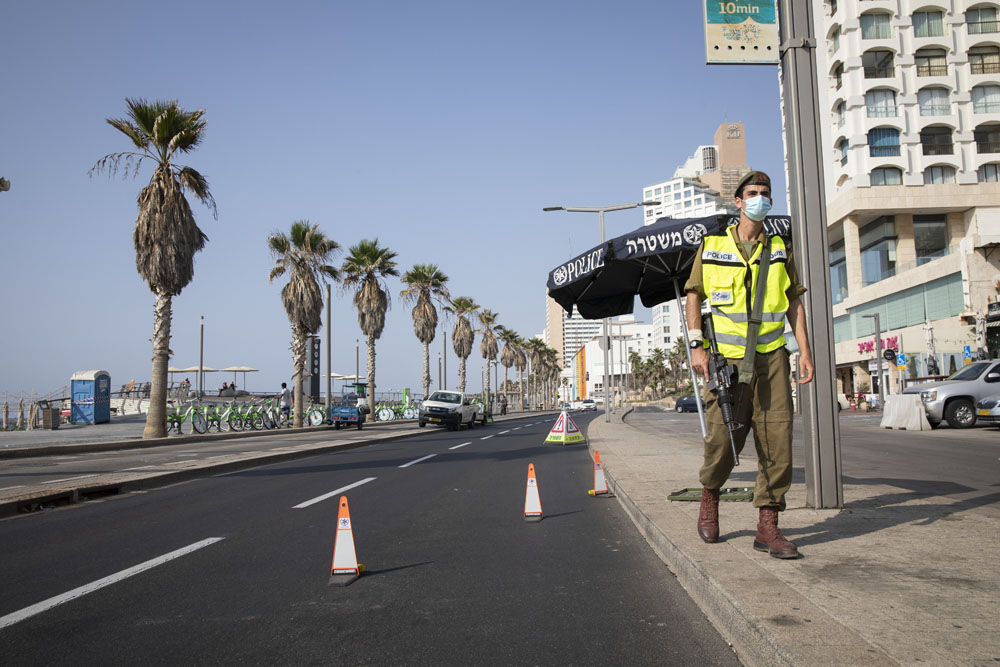 An Israeli soldier stands by a makeshift checkpoint near the Tel Aviv promenade after the government imposed a nationwide lockdown, September 18, 2020. (Oren Ziv)

The people in charge don’t care about those who live here — that much is clear. The next few weeks will be excruciating for many, both when it comes to our mental health as well as our pockets. But let us not forget that just half a year ago, gripped by fear of the unknown, this country saw remarkable expressions of solidarity between and among communities. From neighborhood mutual aid groups in cities like Haifa and Jaffa, to unity between ultra-Orthodox and Palestinians citizens, to factories in the West Bank and Gaza that overnight began producing masks and PPEs to be sold across the occupied territories.

Over the last few months, those tasked with protecting us have instead sown fear and division. But in the face of these divisions and a reckless government that will be remembered as a dangerous, shambolic failure, we still have a choice: solidarity or barbarism. 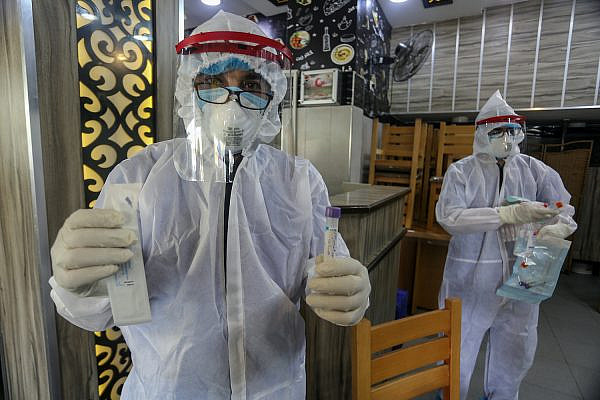