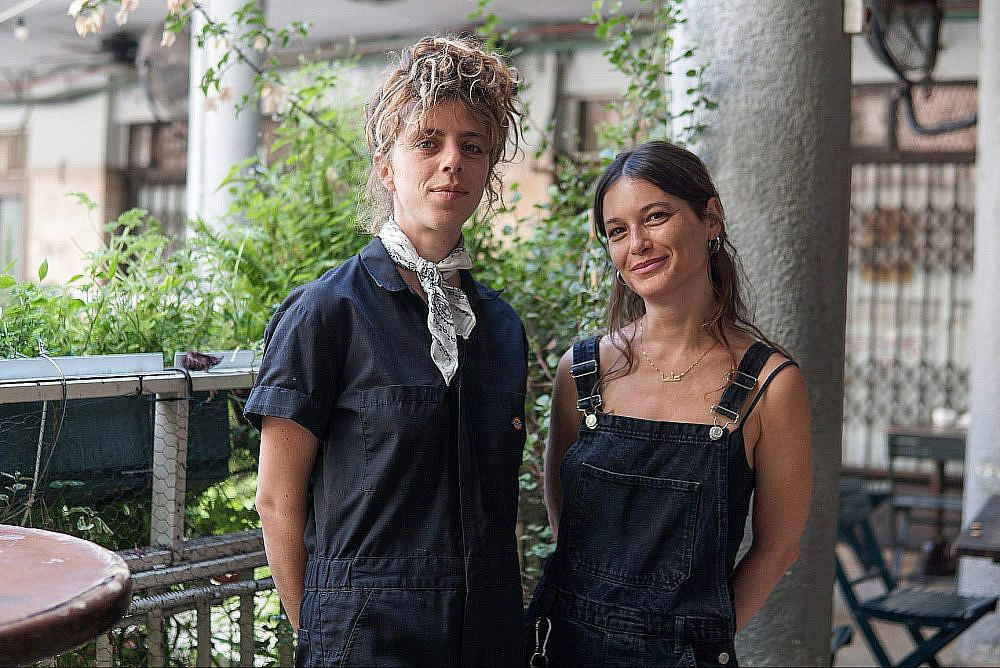 Muhammad Aguani stands front-right of the stage with his son on his shoulders, their heads bopping in unison to System Ali’s hip-hop tracks. Aguani has just finished his Arabic spoken word performance, and is now watching Neta Weiner rap in Yiddish. A few hours earlier, in the exact spot that Weiner is currently bouncing, Culture of Solidarity’s radical book club met to discuss Manar Hasan’s “The Invisible: Women and the Palestinian Cities”; a day prior, the queer black-Ethiopian cultural movement Callactivit hosted their monthly meet-up here. Now the space is packed with people shimmying along to Weiner’s flow as he somehow jumps, raps, and plays the accordion at the same time.

Both System Ali and the audience look completely at home here, which makes sense seeing as House of Solidarity — Culture of Solidarity’s HQ — feels more like a living room than a venue. You can find it up the stairs in the back-left corner of south Tel Aviv’s sprawling Teder complex — a cultural epicenter and the city’s alternative spot for music, food, politics, and everything in between. Since Culture of Solidarity took over the space last year, it has become a hub for activists to meet, debate, organize, and hang out. And with most of Israel’s radical leftist activism centered in Jerusalem in recent years, this feels like a reincarnation of Tel Aviv’s radical spaces from years gone by.

What exists here today has far outgrown the original vision behind Culture of Solidarity, and founders Alma Beck and Danielle Cantor will be the first to admit it. It began in February 2020: Beck was planning to launch an initiative to collect surplus food from restaurants and growers to redistribute to people in need, and reached out to Cantor on Instagram because she worked in the field. Just as they were about to meet up, COVID-19 hit.

But instead of shelving the idea during the lockdown, they reached out to restaurants and tech companies in the greater Tel Aviv area and soon had more than enough food on their hands. Beck and Dede both worked in the NGO space in the past, so they quickly built a network of volunteers and spent lockdown delivering food, diapers, baby strollers, and other essential supplies to families in need. 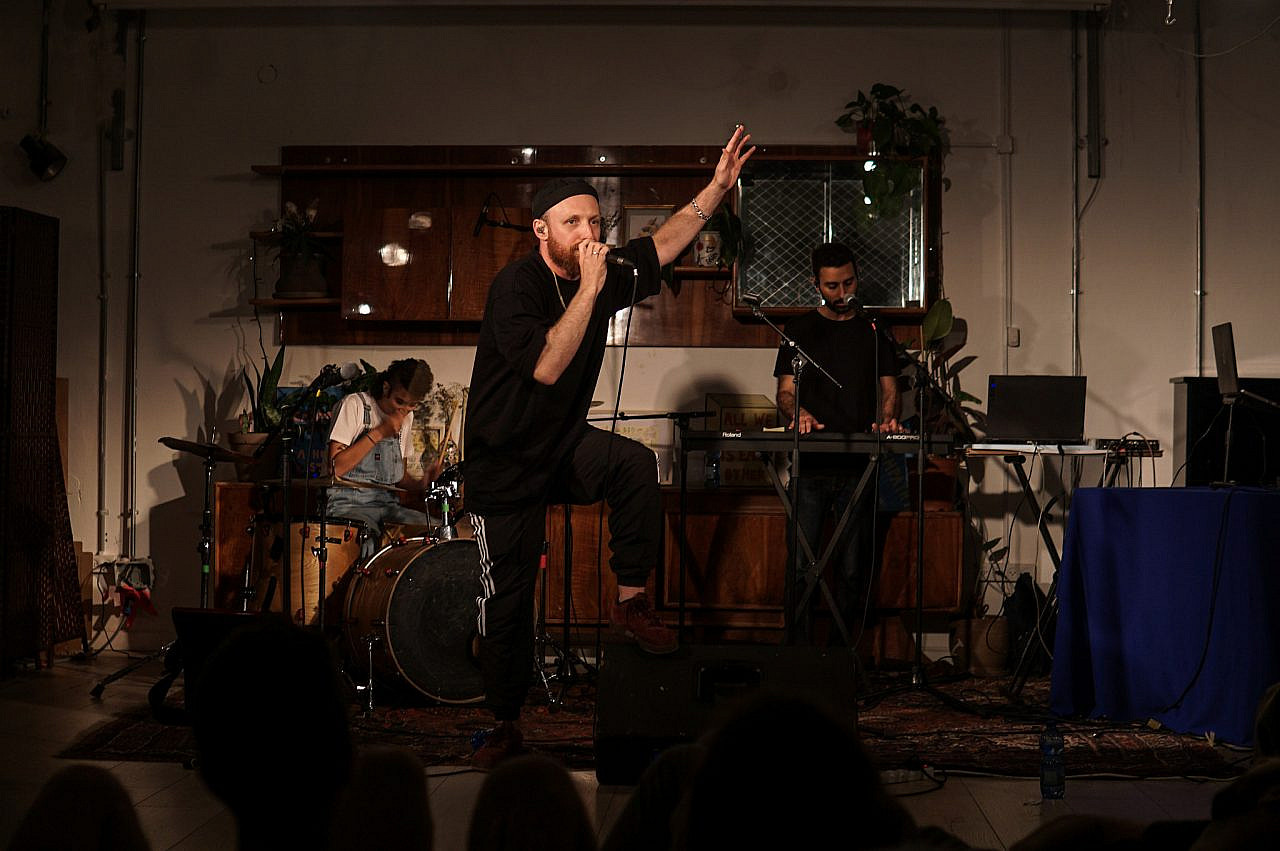 “That’s when we realized that the welfare system we pay our taxes to just isn’t working,” Beck says, chatting to +972 Magazine from the upstairs balcony of Teder. Despite not knowing each other before they started this initiative, Beck and Dede are now in near-constant dialogue and regularly finish each other’s sentences. As we chat, they exchange quips with everyone who walks by, from the security guard to the cleaner to the owner.

When the first lockdown ended, Beck and Cantor called Israel’s welfare services to tell them the names and addresses of the people they were helping. “We were sent between departments for months, and when they did register someone, they’d qualify for nothing,” Beck says. “We realized the systems that are supposed to support us as citizens aren’t doing their job.”

Culture of Solidarity is sustained by community donations and volunteers, choosing not to accept money from government institutions or corporate funders. “It’s important our work isn’t attached to anyone else’s interests,” Beck says.

Their social media presence is mostly responsible for their deft fundraising efforts. “We just helped organise an amusement park trip for 100 Palestinian kids from the Jahalin [Bedouin] tribe,” Beck says. “We posted to ask for donations for a NIS 70 ticket and we raised that money within 36 hours.”

The platform will help anyone in need: if someone urgently needs a babysitter, for example, they can ask Culture of Solidarity to call on their community and it will often get sorted in minutes. They use social media to publicize their events and recruit volunteers, and Cantor says the community keeps on coming — not only because they care about the work, but also because it’s social. They want to see their new friends again.

In October 2021, Teder donated the space for Beck and Cantor’s altruistic army to use for packing and storing supplies. But with so many volunteers connected to so many organizations, House of Solidarity quickly grew into what it is today: a second home for dozens of leftist groups and human rights NGOs, from Physicians for Human Rights-Israel and Zochrot, to Can2come and Breaking Walls.

A radical home for a new generation

Yuli Gershoni runs House of Solidarity’s radical library with the help of Ben Ronen, where people can loan books about capitalism, anarchism, the occupation, the climate crisis, the pros and cons of hallucinogens, and the complete works of George Orwell. The library also coordinates a monthly movie club, Resistance Cinema, for screening leftist films and documentaries. 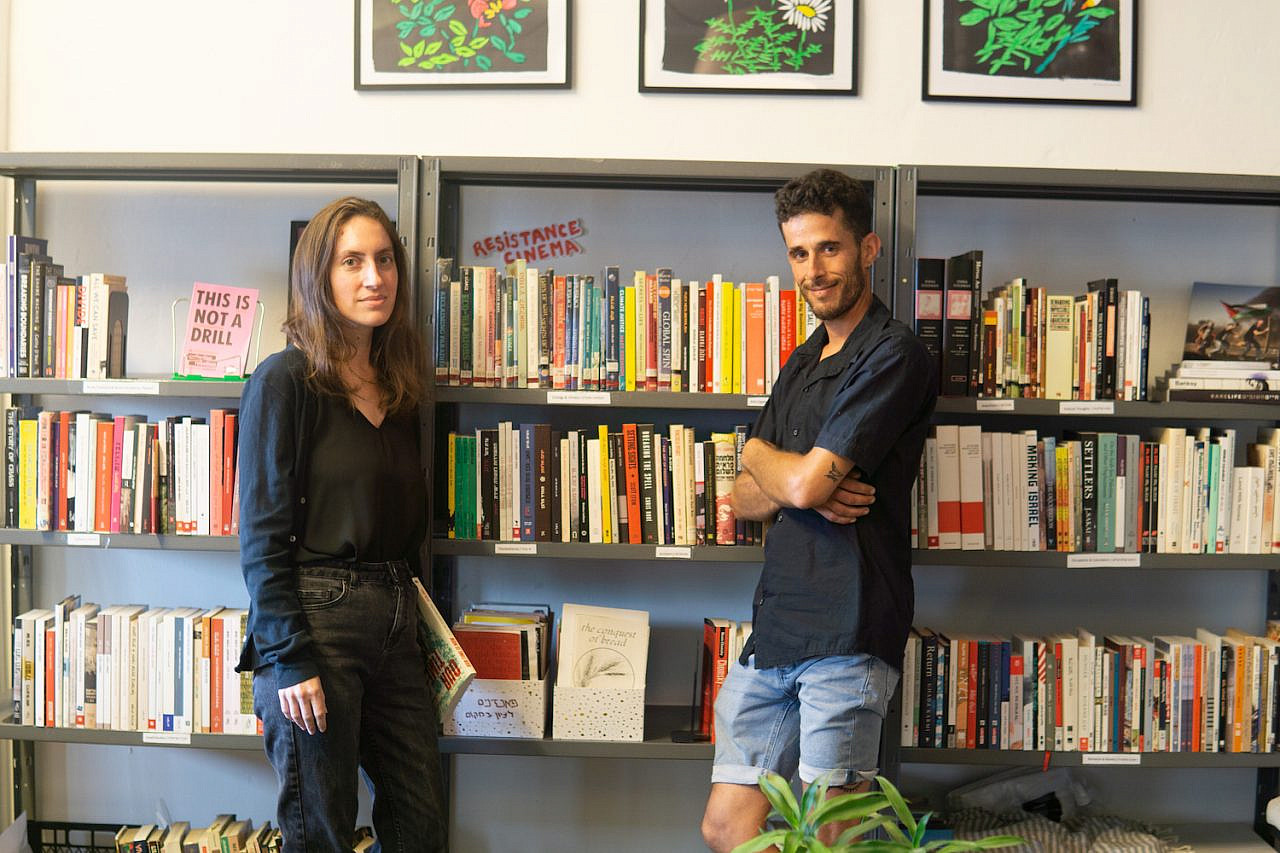 Gershoni has been active since she was a teenager in the early 2000s, when Tel Aviv’s punk underground was indivisible from the radical left. Ronen comes from a long line of activists — his parents are life-long leftists and his brother is a founding member of the documentary photography collective Activestills. Back in the early 2000s, both of them frequented Salon Mazal, a radical library and infoshop run by punks, anarchists, and activists that hosted meetings, workshops, lectures, and Arabic lessons. “That’s where we would go to make banners and print t-shirts for demonstrations,” Ronen says.

When Salon Mazal closed in 2007, the community was homeless, so Ronen and some friends opened Rogatka in 2009. “It was a bar, restaurant and concert space,” Ronen says. “We had lectures and events and hosted everyone from black metal bands to Palestinian hip-hop crews to queer collectives.” In 2011, the same crew opened Spachtel, a reincarnation of Salon Mazal’s library. But when both Rogatka and Spachtel closed in 2013, the community was left homeless once again.

“I think people got tired,” Ronen tells +972. “We were working all the time, three or four events a week, and there wasn’t a new generation to continue it.” They tried to bring new people into the community, but there had been a shift in activism and youth culture. During his time as Prime Minister from 2009, Benjamin Netanyahu took demonizing the Israeli left to new levels, which likely impacted the younger generation and deterred them from joining Ronen’s ranks.

But if Tel Aviv’s radical left was strongest in the 2000s, it never disappeared altogether. Between 2012 and 2016, there was Bar Kayma, a multi-storey cooperative that grew out of the 2011 social justice protests, and functioned as a restaurant and political space in the south Tel Aviv neighborhood of Florentin. Today, there’s The Left Bank, a political and cultural center associated with the Israeli Communist Party; This Is Not An Ulpan, a cooperative language school that teaches both Hebrew and Arabic and is rooted in values of liberation and justice; and Beit Alfa, a punk club in one of the city’s industrial areas. But community spaces have been in short supply. 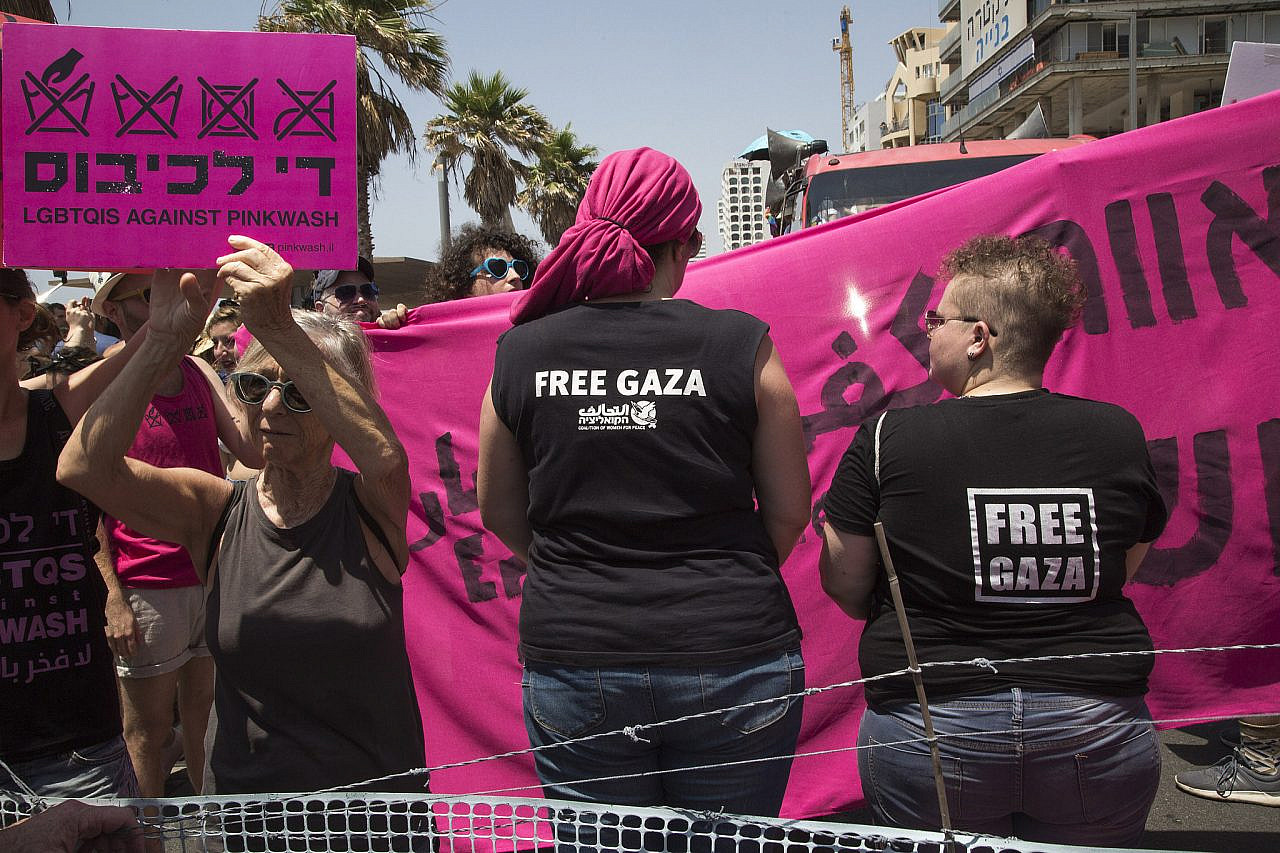 Israeli activists block the Tel Aviv pride parade to protest against pinkwashing and in solidarity with the Great March of Return in Gaza, June 8, 2018. (Activestills/Keren Manor)

So when Beck and Cantor asked Gershoni to build a radical library for Culture of Solidarity, it felt like an opportunity to bring her old world back to life. Gershoni and Ronen note that young people are engaging in politics again, and many volunteer as librarians and use the resources to learn and unlearn. “17-18 is an age where you’re still establishing your political views,” Gershoni says. “Volunteering at Culture of Solidarity is a bit more radical than volunteering at a puppy shelter.”

Instead of pushing their political agendas onto their volunteers, Ronen and Gershoni create a space for them to ask questions and reach their own conclusions. “We all went through the same conditioning growing up,” Ronen says. “The left is in such a severe condition, we have to fight for every young person,” Gershoni adds. “So we want to give them a comfortable space to nourish them.”

This is a theme that chimes throughout Culture of Solidarity’s praxis. Cantor and Beck both say they’ve felt excluded in male-dominated, leftist spaces in the past. “I remember going into leftist events and not feeling comfortable asking questions,” Beck says. “And if I didn’t understand the exact agenda of the group I’d get a snarky comment.”

On top of the activities that Cantor and Beck themselves coordinate, House of Solidarity also provides a much-needed space for other leftist groups. Physicians for Human Rights-Israel (PHRI) is one such group that regularly uses it for workshops and lectures, and has collaborated with Culture of Solidarity to launch crowdfunding campaigns. After Israel’s 11-day assault on Gaza in May 2021, for example, Culture of Solidarity shared PHRI’s Gaza relief appeal with their community, and raised NIS 192,000 for medication and medical equipment in the besieged strip. 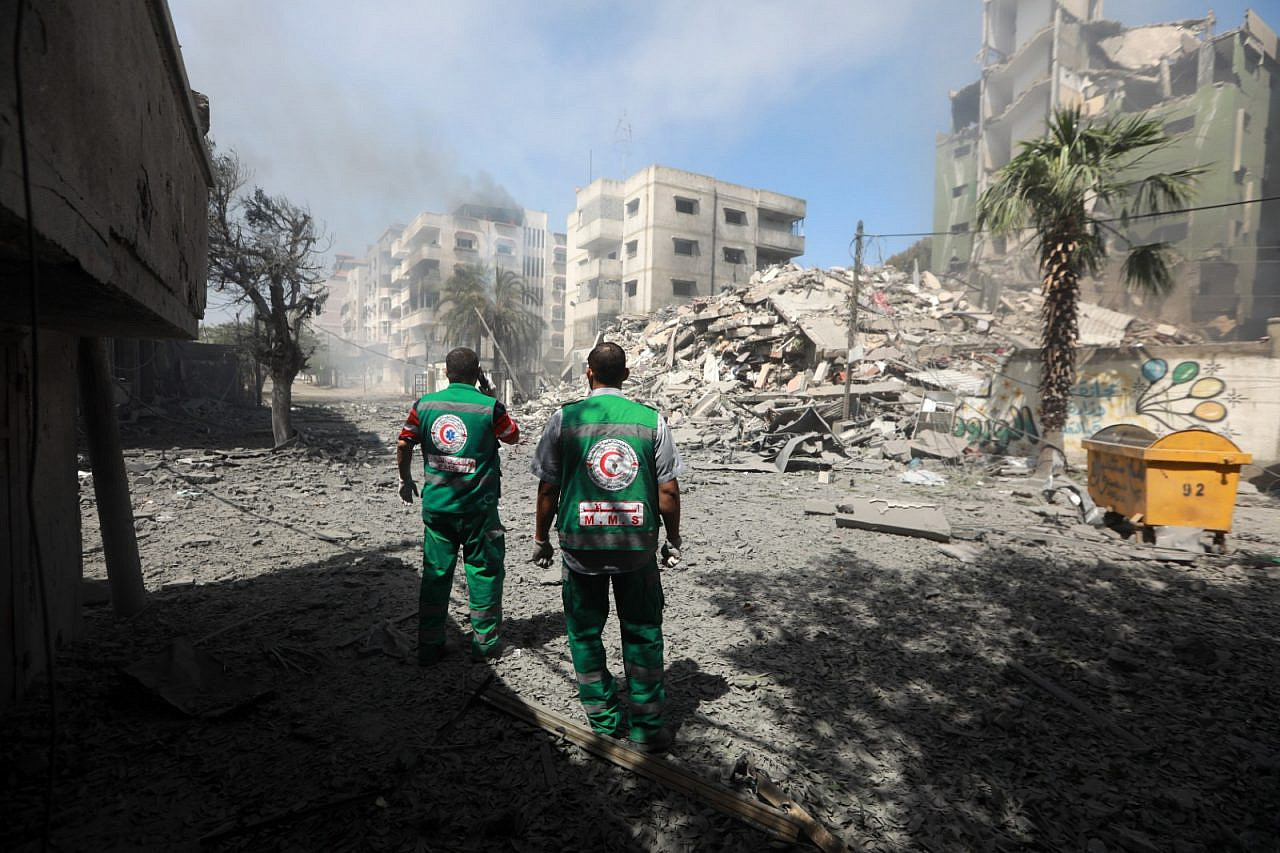 Medics with the Palestinian Red Crescent assessing damage after an Israeli airstrike in Gaza, May 7, 2021. (Mohammed Zaanoun/Activestills)

Lee Caspi, PHRI’s director of resource development, says that while Tel Aviv is liberal on some issues, such as being LGBTQIA+ friendly, “most people couldn’t care less about what’s happening in the occupied territories or in the asylum seeker community.” But Teder’s central location and fun reputation makes PHRI’s events more accessible and appealing; sometimes people stumble across them by accident and get involved as a result.

What makes House of Solidarity unique, Caspi continues, is that “it’s a space where you can be unashamedly leftist. Most venues in Israel won’t host our events, but here we don’t have to hide the fact we’re working to support Palestinians.”

While the Palestinian struggle is the focus of many of the activities in House of Solidarity, there is room for other issues too — not least the Mizrahi struggle. In this sense, the space is managing to overcome what has historically been one of the biggest problems on Israel’s radical left: the disconnect between different struggles and those waging them.

Neta Hamami Tabib is active with the Mizrahi feminist movement Breaking Walls and the left-wing collective Can2come, and says House of Solidarity has led to a crossover of activists between different movements. “Someone will attend one of our lectures about Mizrahi feminism, and while they’re there they’ll meet someone who’s attending an anti-occupation event,” she says. “So they’ll go and listen to an anti-occupation activist for the first time in their lives.” There, they’ll chat to someone about Breaking Walls, and the community keeps growing.

Hamami Tabib says it used to feel like the entire weight of the movement was on a few people’s shoulders, but Culture of Solidarity has lightened everyone’s load, and boosted the individual movements at the same time. Together, everyone feels stronger. 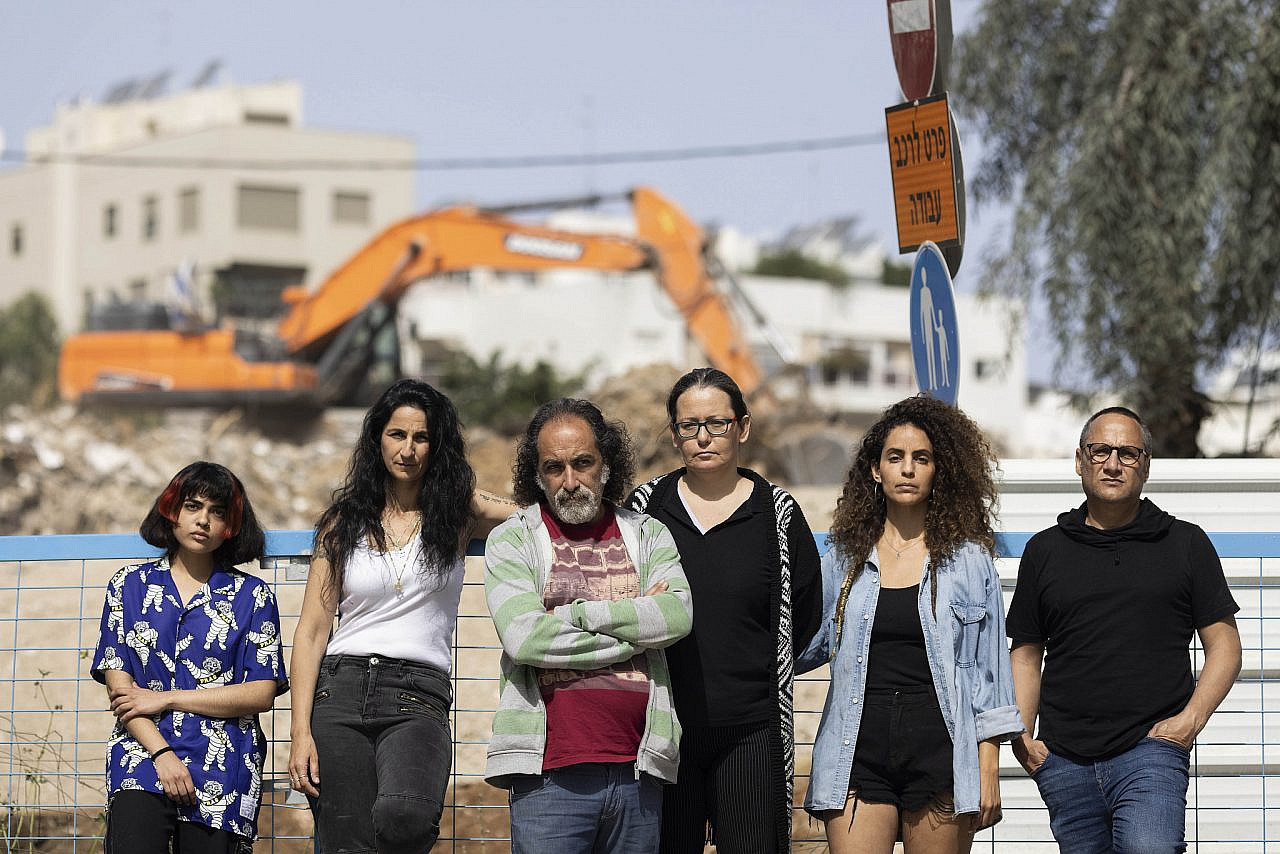 For Beck, building these connections is the very essence of what they are trying to achieve. “Culture of Solidarity was born from working alongside communities with different struggles, and the realization that there’s not a lot of exposure to that in our society,” she says. “So we’ve built a space that amplifies people’s stories and challenges so we can bring that awareness to our community.”

Life on Israel’s radical left can feel exhausting and isolating, which is why cultivating community is crucial to its survival. Now, for the first time in years, there is fertile ground on which that community can flourish and grow.

Alice Austin is a freelance journalist covering culture, subculture, and the intersection of politics and music.