The rioting last night in south Tel Aviv against African migrants – some of them asylum seekers –  was another one of those moments that paralyzed me with a mixture of disbelief, horror and sorrow. The photos of smashed windows were reflexively associated in many Jewish minds with Kristallnacht, as many people on social networks pointed out. One photo of Likud MK Danny Danon standing on a platform exhorting the masses to expel the strangers in their midst was reflexively associated in my mind with Benjamin Netanyahu “on the balcony” circa 1994 or 1995.

In those notorious demonstrations, Netanyahu famously stood on the balcony overlooking Zion Square in Jerusalem, participating in, and possibly goading the angry crowds screaming for blood after terror attacks. In those sorts of demonstrations, Prime Minister Yitzhak Rabin was portrayed in SS uniforms, or with a kafiya on his head, behind crosshairs. That wave of rage ended in the assassination of a Prime Minister.

How will this wave of rage end? Today, the government sides with the protesters, so the mob isn’t likely to turn on the leaders.

Incidents such as firebombing attacks on apartments of African migrants in those neighborhoods don’t leave much to the imagination. It’s only by chance or luck that no migrants have been killed up to now. And for African migrants facing war and crushing poverty at home, and horrible financial, sexual and physical exploitation by smugglers even before arriving in Israel, it’s strange to talk about luck at all.

Local residents are frenzied following recent incidents of rape and sexual assault by migrants. There is no minimizing these crimes. It is natural that the people who already feel marginalized in society fear and resent those who flood their neighborhoods with unfamiliar foreign faces, desperation and idleness – and some criminals. The Israeli government effectively has no overall policy for economic or political non-Jewish migration although the phenomenon is over a decade old; perhaps if there was a clear policy, the concentration of migrants in the poorest neighborhoods would not be as grave, and the migrants themselves would not feel, or actually be, as helpless.

But the data on crime doesn’t bear any relation to the exaggerated panic. The last two reports by the Knesset’s Research and Information Department (from 2010 and 2011, in Hebrew) show that the crime rate among African migrants against Israelis is a fraction of the general crime rate – in Tel Aviv in 2010 for example, police files were opened against just over one percent of African migrants, but over six percent of the general population; in 2011 files were opened against roughly two percent of the total African migrant population in Israel – actually a slight decrease compared to the total in 2010.

However, a large portion of each report is devoted to the crimes of Israeli society against the migrants, including stabbing, firebombing, sexual exploitation and trafficking, and widespread violations of labor rights.

But poring through the data, I got angry at myself. Why do I need to parade the numbers as a defense against mob violence? We have a mechanism for dealing with crime and it’s called the law. Not vigilante action. I didn’t remember any demonstration at the sweet little moshav of Batzra, where the salt-of-the-earth Erez Efrati lived at the time he tore a woman out of her car, dragged her down a bank of the Yarkon River, beat the shit out of her and tried to rape her until he was chased away by passers-by. Efrati will never face a mob – and as much as I hate his crimes, he shouldn’t.

A few weeks ago, on a sunny spring morning around 10am, I was returning home from a jog and on my block, I found an elderly woman on the ground, dazed, bleeding, crying and missing the necklace that had been ripped from her neck by two guys, she said, who jumped her from behind in plain view of several bustling cafes. I did feel nervous for several days afterwards. But now I’m more nervous about the shopkeeper who was one of our little group of people helping the woman, when he said he was sure the thugs were African migrants. This was not because he witnessed the event himself, but because, he said with grave certainty, they are the source of the waves of crime. I scoffed and told him that Israelis have said that about the Russian immigrants, and the Arabs before that, and so on.

In fact, the most consistent identifying feature of most violent criminals in general is their gender – guess which one.  But you don’t see me organizing rallies or inciting mobs against men.

Yes, the streets are dangerous world over. No, that is never, ever a reason for mobs or politicians to threaten migrants with expulsion, or call them a cancer.

I’m terrified that the rioters yesterday didn’t want to see justice done; that they were more about expressing general rage, racism, xenophobia and violent forms of nationalism, than about the actual crime rate. I’m terrified because the rally was instigated by our elected leaders.

Last week, when I stood at the gates of Tel Aviv University, I was shaken by the mob rage against those commemorating the Nakba. Screaming, red-faced, sweating, hysterical counter-demonstrators stood in a ring around a tiny cluster of students in the middle, drowning them out with their poison. I am becoming familiar with that look of violence, palpable and unmistakable, burning out of their eyes even if no one is physically harmed – yet.

There was no physical crime or neighborhood encroachment behind the anger of those demonstrating at the university. Most of the ones I saw didn’t even look like students – apparently they came just to express their hate. 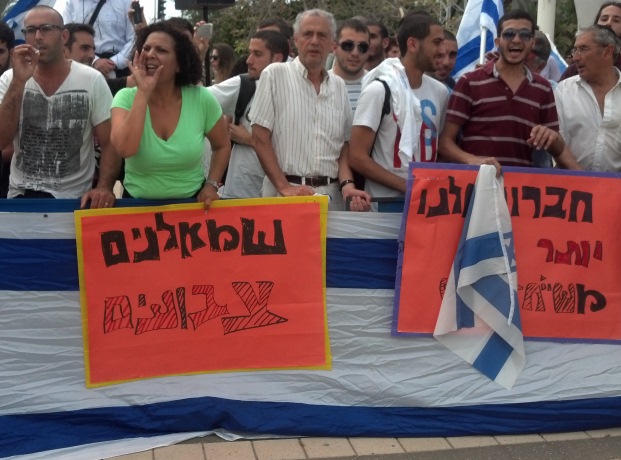 It looks like certain people in Israeli will continue looking for opportunities to foster violence, and if they can’t find them, they’ll invent them. Those people include our leaders.