The first-hand story of eviction in one of Tel Aviv’s poorest neighborhoods. ‘They are trying to frighten us,’ someone said, and everyone crowded together and held each other even tighter. Then a sledgehammer punched a hole in the drywall. We didn’t expect them to enter that way, the way soldiers did in Jenin during Operation Protective Shield.

First there were the noises. “They’re coming!” and “Police!” Those who holed themselves up in the Hakak family home, where I was also waiting, raced to close and lock the steel security door. And then silence. “Don’t stand near the door,” warned one woman. Everyone moved back and pointed their cameras toward the entrance. The tense silence was broken by faraway explosions, which we knew were coming from the burning barricades around the neighborhood, which painted Givat Amal in orange in the pre-dawn hours.

Choking from the smell of smoke that lingered on our clothing after a sleepless night around a fire, we held our breath. And then, yelling, knocking, and more yelling. No one knew from where. “They are trying to frighten us,” someone said, and everyone crowded together and held each other or their cameras even tighter. Then a sledgehammer punched a hole in the drywall. It only took two more swings before the wall collapsed. We didn’t expect them to enter that way, the way soldiers did in Jenin during Operation Protective Shield. It was by luck that the sledgehammer didn’t hurt any of those who stood by the wall.

From there everything sped up. Armed riot police entered the room through what was once a wall; they searched all the rooms and gathered the family members, who refused to leave by choice. The police dragged them on the ground. “You won’t take me out of my own home!” yelled some of the women of the family. After removing the family members, police removed Meretz MK Ilan Gilon. Then came the photographers’ turn. And then the residents and activists who chained themselves to the wall. 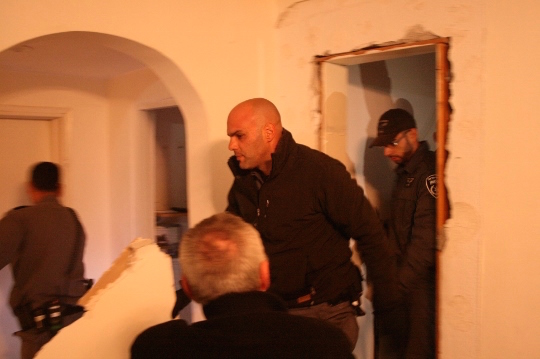 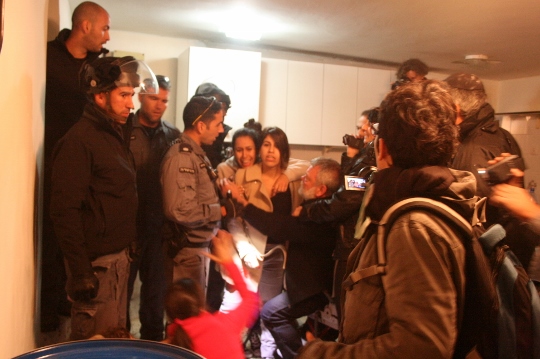 The pushing, beatings and swearing continued outside. Two women collapsed just outside the house. Fires raged across the rest of the neighborhood; the scenes repeated themselves in every home. Police. Women collapsing on the floor, either from crying or from beatings. Activists being dragged away by police. Cameras. Someone attempted to call an ambulance to treat those who either collapsed or were injured. Police refused to let the medics enter the neighborhood, and they were forced to wait outside.

It was over in half an hour. The last of the activists and residents were brought down from the roofs of the houses. Contract workers put up fences around the homes in the run-up to the demolition, and the police made sure that no one cross them. One activist, who insisted on jumping the fence, was eventually arrested. At this point the ambulance was allowed in the neighborhood. Firefighters put out the burning barricades, while plumes of smoke blocked the Yoo Towers in the background. Dawn. 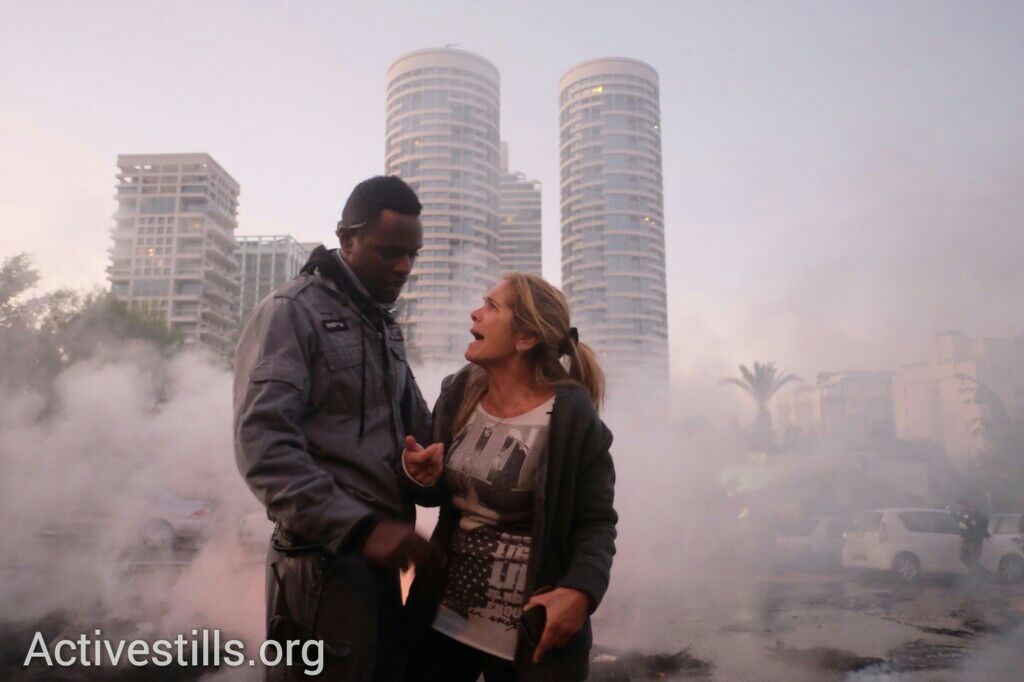 Givat Amal residents outside of the area cordoned off by police, Tel Aviv, December 29, 2014. The Yoo Towers can be seen in the background. (Photo by Activestills.org)

Background. The northern Tel Aviv neighborhood of Givat Amal was created as a type of refugee camp for Jews who had to flee other parts of Tel Aviv during the 1948 war. They were settled by the state in houses that had only recently been occupied by Palestinian residents, in what was called the villge of Jamousin, and were told that their job was to hold on to the houses to prevent Palestinian refugees from returning.

Years went by, and the residents of Givat Amal kept living it rough in refugee camp style conditions. Time and again they were promised alternative housing, but the promise was never fulfilled. In 1961 the state sold off the land to a private real estate company, under the condition that the company give each resident an apartment in the new modern houses it planned to build there. But the new houses were never built, and over the decades the land was sold off time after time, its price going up and up each time.

In recent years the current owners (the Tel Aviv municipality being one of them) decided it was time to make good of their property, got permits to build new skyscraper apartment buildings and by and large – decided to ignore the exicting residents, whom they call “trespassers.” A few families have already been evicted in recent years, some of them were offered a sum of money as compensating, others – thrown out without a dime. Now the pace of home evictions is on the rise, and this week’s police raid is one more step on the tycoons and builders’ road to make their luxury apartment buildings dream come true. Cops. What are we supposed to do with these cops? Around 200 of them were there. Violent. Blind. Not hesitating to hit, to push away photographers, to drag people out of their homes, to prevent medical care. And nobody knows what to do about them. Some activists and residents have called them Nazis. Some accuse them of being corrupt. Some shout at them in vain attempts to get them to feel something, to think about what would happen if they were ordered to evict their own mother or if the toys lying on the ground belonged to their own children. Others try to rationally explain the story of the neighborhood — that they are not trespassers, that the state itself told them to go live there and made false promises of alternative housing. Those people call on the police to refuse to help the tycoons in throwing them onto the street. 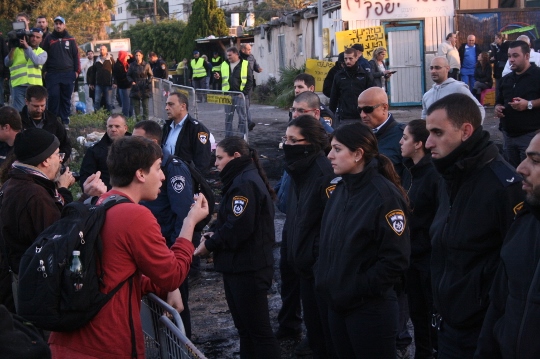 But ultimately the cops are just people, and this is their job. That’s what they did last week and it’s what they’ll do next week. It’s a crappy job, but they do it — most of them with a straight face. You can see that for some of them it’s difficult. That they know that on the Israeli social ladder they are far closer to the evictees than to the capitalists and politicians who sent them. They know that it’s a horrible thing, the destruction of a home. Others of the cops, a small minority, exude something sadistic. And of course the police aren’t the story here, rather the state and the municipality and the capitalists. But the state and the municipality and the capitalists didn’t show up that morning. Only police. So what are we supposed to do with them? Arabs. I learned a long time ago that there is no such thing as an eviction in Israel without Arabs somehow being involved. No such thing. Arabs are ever-present. One time it’s by comparison: the evicted residents yell at the police that they too were combat soldiers, that the army doesn’t even treat Arabs the way that the police are treating them now — and how are they not embarrassed. Another time it’s historically: time after time, people bring up Givat Amal’s history, which was once called Jamousin, and that the new Jewish residents “were sent here in order to keep the Arabs away.” Therefore, the Jewish residents are the pioneers and not trespassers, some of them say. In another telling, it’s the Arabs, not the tycoons, who should be getting this land.

Across the street, in a white Ford Transit, are six Palestinian laborers from the West Bank heading to work in the adjacent Yoo Towers neighborhood (or “Ayalon Heights,” as the city decided to name it a few years back). Maybe those Palestinian workers are the same people who were kicked out of Jamousin. Maybe the residents of Givat Amal served as combat soldiers in their refugee camps. Maybe they are the laborers who refused to pass through an Israeli checkpoint a week earlier due to overcrowding and maltreatment, and who are now here to build skyscrapers for rich folks on the ruins of Jamousin, on the ruins of Givat Amal.

Residents. There’s no way of describing the residents’ pain and insult. Five minutes before it all began, Hannah Hakak said that she simply didn’t believe that it would actually happen. And then when it did happen, you could see people’s whole lives, their memories and their loves, being torn from them as they are torn from heir homes; that by evening it would all be a pile of rubble; that by the next day not even the pile of rubble would remain; and that the evictees would start living in tents on plots of land where their homes once stood, like some of the previous evictees have lived since last September. There are another 100 or so families in Givat Amal whose homes are in various stages and threats of eviction. Residents of Givat Amal after being evicted from their homes, Tel Aviv, December 29, 2014. (Photo by Haggai Matar)

Desperation. Hope. And it’s insufferable that after the drawn out campaign and protests by and in support of Givat Amal’s residents, after all of the preparations and fortifications, sleepless nights, everything — it was all over in half an hour. It didn’t even take too much effort to evict them. The homes of eight families are simply gone. And it’s a terrible thing to know that they aren’t the first and they won’t be the last. It’s terrible and disheartening.

And yet, there is hope for the future of the struggle. Hope can be found in the fact that the residents and activists exacted a price, from the tycoons and from the state. There is hope in that anyone who wants to throw families out of their homes now knows that they will be forced to deal with protests outside their own homes, with organized resistance to evictions, with bad PR, and with photos of residents crying under the boots of police. And if more people join the struggle, it will become more and more difficult. Maybe next time they’ll think twice before ordering such an eviction again. Maybe the state will wake up and understand that the right to housing is a basic right, which can’t be trampled with battalions of riot police. It’s up to us, and us alone, and there’s hope in that.