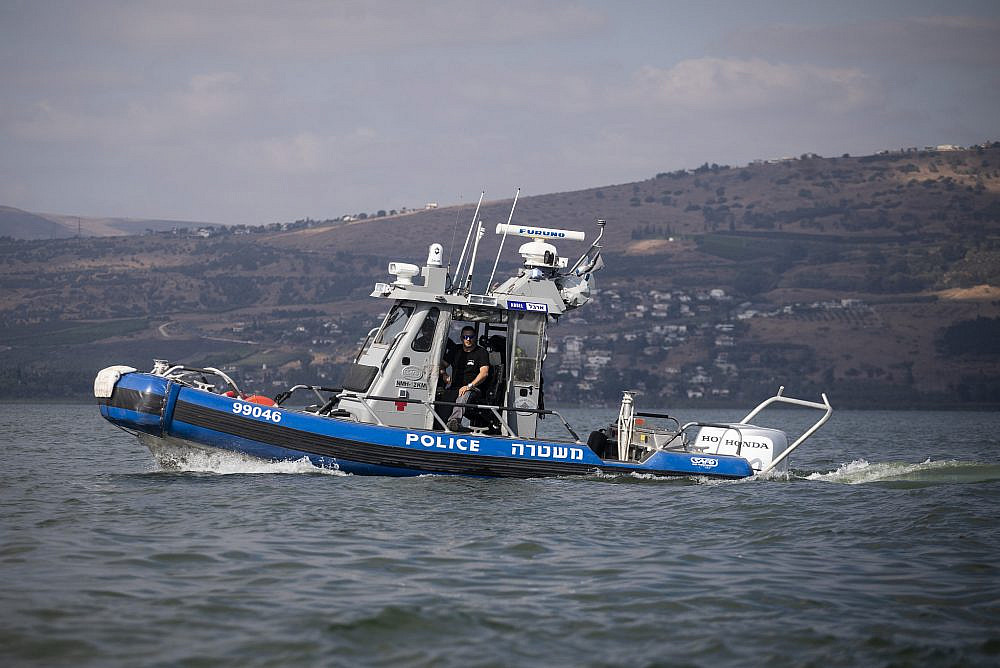 Israeli police patrol on a boat during the annual crossing of the Kinneret, the Sea of Galilea, September 21, 2019. (Hadas Parush/Flash90)

On July 30, Israeli navy units pulled out the body of Palestinian citizen Raed Mahamid from the bottom of Lake Tiberias (Sea of Galilee) at a depth of 32 meters. Mahamid, a lawyer from the city of Umm al-Fahem, had gone missing during a cruise with friends on the lake, instigating a search effort by residents and authorities that lasted nine days before they finally found him.

As expected, the Israeli police and the army declared that they were proud to do their duty toward an Arab citizen, with the Israeli media echoing praise of the state’s ethical response. One could imagine seeing Prime Minister Yair Lapid bragging to the world about how this incident demonstrates the country’s humanity toward its non-Jewish inhabitants, with other government officials even inviting Palestinian youth to volunteer for the police and the army that found Mahamid.

This farcical portrayal of Israeli morality, however, does not reflect what actually happened at the lake. Rather, the recovery of Mahamid’s body is a story of the power of Palestinian popular action amidst a reality of exclusion that dominates all Israeli agencies.

I was among hundreds of Palestinians on the shore of the lake over the course of those nine days to support the Mahamid family. Since the early hours of the lawyer’s drowning, experienced sailors, swimmers, and the other men and women volunteers flocked to Tiberias to help search for his body. They came from all corners of the Palestinian homeland that are able to travel inside the “Green Line” — from the Naqab in the south, from East Jerusalem, from coastal cities, from the Triangle in the center, and from the Galilee in the north. People there spoke of how they wished that the besieged Palestinians of Gaza, renowned for their skills at sea, could be able to come to Tiberias; the coast is not complete without them.

Many of the volunteers at the lake did not return to their homes for days, searching from the morning and through the night while sleeping outside ready for any emergency. The numbers grew with each passing day, bringing more equipment, diving suits, rowing boats, and more. Many Palestinian families, shops, and bakeries donated food supplies, drinking water, and tents and accommodation supplies to help us stay on the shore. Arab lawyers also worked to push the Bar Association to pressure the Israeli government to use all its resources to rescue their fellow lawyer Raed.

The Mahamid family themselves were at the forefront of this rescue effort. The main supervisor of the search was Nael Mahamid, a lawyer and brother of the drowned soul, who was in constant contact with Arab journalists, Arab Knesset members, the Prime Minister’s Office, and the Director General of the Public Security Ministry, urging them to activate the state’s official rescue teams. 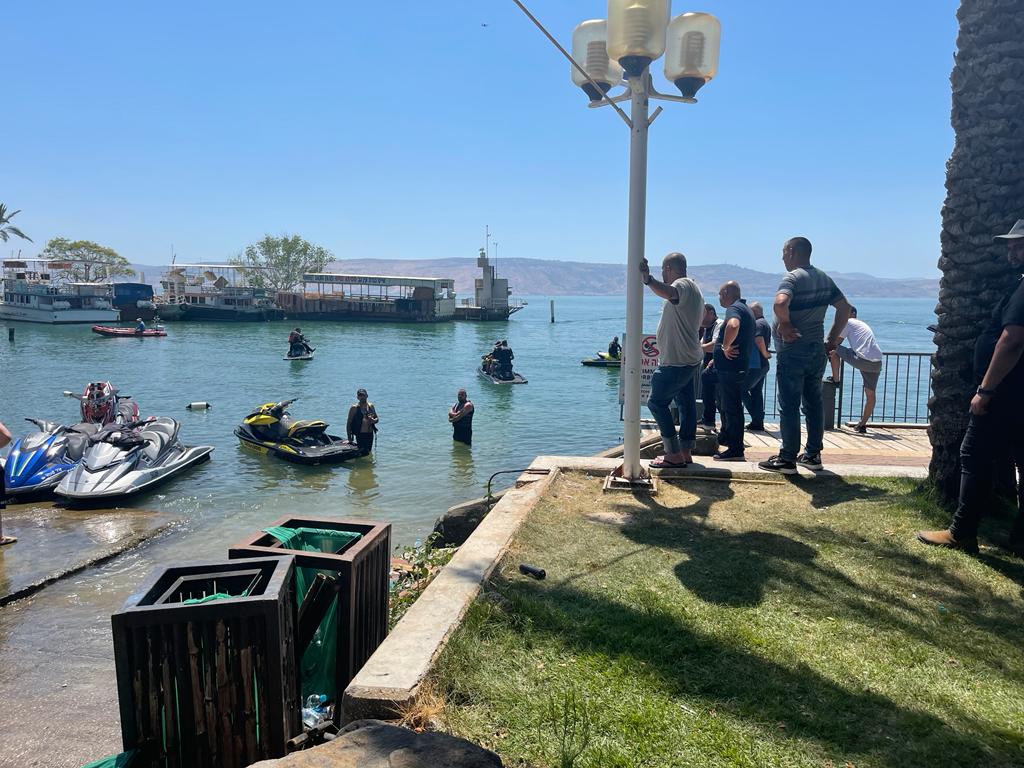 Raed’s wife, Halima, appeared on several media outlets and organized a protest on the main road of their hometown Umm al-Fahem to urge the state to greenlight the use of a special sonar device to find her husband. Had the authorities used the device earlier, Halima said, they could have found her husband much faster. As Raed’s mother shouted on the beach: “I want my son, I want to bury him, not to let him be eaten by fish.”

The Israeli police and army, as well as the emergency services, only came at a later stage — and even then they were initially of little help. The police officers at the scene prevented the Palestinian volunteer teams from using drones equipped with cameras, claiming it was for “security” reasons. This is the same police that has used such technologies to suppress and spy on Palestinian citizens for their political activism for years, including in Mahamid’s hometown of Umm al-Fahem, yet were now pretending that it is their duty alone to save the drowned.

Infuriated by the authorities hindering their search, Palestinian citizens escalated their protests against the state’s negligence; at the women’s demonstration in Umm al-Fahem, the crowd chanted: “Raed is drowned in the sea and the police are not helping.” The atmosphere felt ripe for the spread of more demonstrations in Arab towns calling on the state to harness its resources to find Mahamid, in the same way it would for any missing Israeli Jew around the world, whether it was on Mt. Everest to the peaks of Peru.

As a result of the increasing popular pressure and accompanying anger, a government official promised to use highly-sensitive military technologies, including the sonar device that detects objects at the bottom of seas and is used exclusively by marine commandos, on the condition that no civilians be present in the area. It was then that the Police Commander-in-Chief suddenly declared to the media that “the state spares no effort and the police and army are using the latest technologies available in the navy and air force.”

A lesson in community power

It was ultimately the sonar device that succeeded in finding Raed’s body. But the paradox here is that such devices and technologies are usually deployed by Israel against the Palestinian people, especially those living under siege and aggression in Gaza. 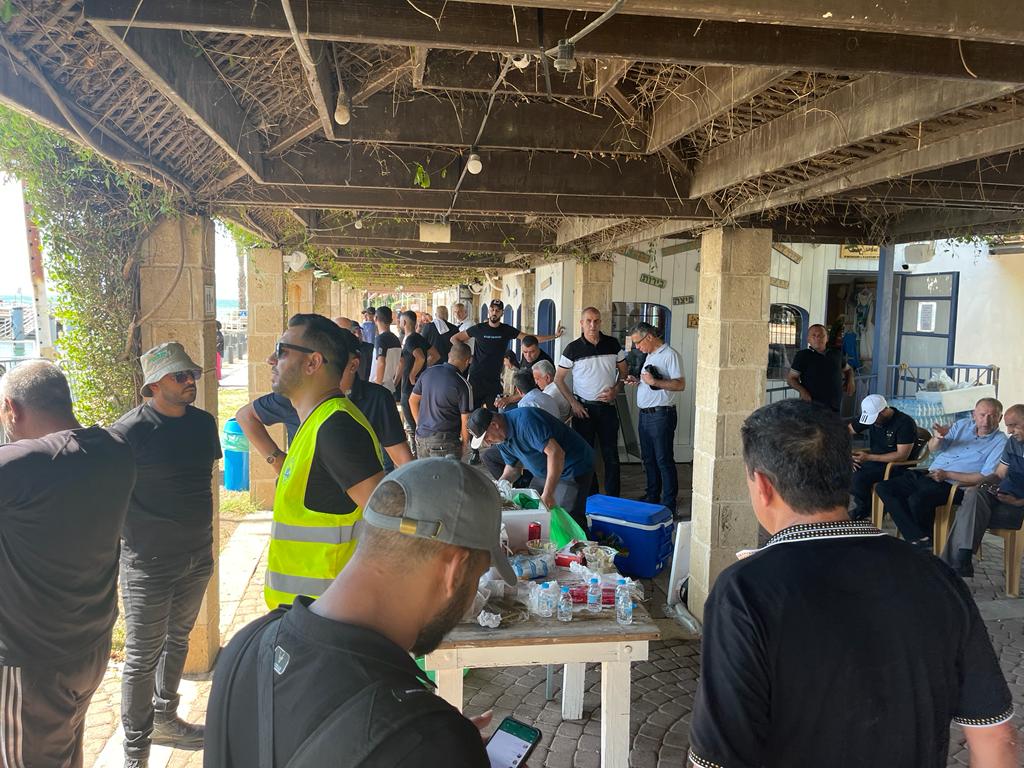 The context behind this detail is crucial to recognize in the events at Lake Tiberias. In the eyes of Palestinian citizens (also known as “Palestinians of ’48”), the Israeli police are part of a larger war of attrition and systematic effort by the state to empty Palestinian society of its strength and unity. This attrition is pursued through both a policy of indifference when victims are Palestinian Arabs, as well as a policy of active collective punishment against the Palestinian public.

This war is carried out, on one hand, through brutal repression, political and judicial persecutions, house demolitions, ethnic cleansing, military aggression, and deepening occupation. On the other, it is advanced by enabling organized crime and the weapons market to flourish in Palestinian localities, with the state turning a blind eye to this phenomenon which is now killing scores of people every year, wounding hundreds more, and damaging countless properties. Indeed, it is no coincidence that the largest source of weapons offered on the Arab black market, estimated at half a million firearms, is the Israeli army itself.

The result of these policies is that ‘48 Palestinians have become a society that has lost all sense of personal security, and lost any belief that the Israeli state can provide them with the minimum level of protection while it deals with them as enemies and as a battle front.

Nonetheless, the Palestinian public knows its rights. They seek to compel the state to do its job and to prevent it from treating every human right as a privilege, including saving a life.

The political journey of the Palestinian citizens of Israel shows that there is no right that we enjoy except for when we fight for it. In that same vein, we are recognizing that our conflict with the Israeli establishment is not a matter of a misunderstanding or lack of knowledge about the state, but rather the state’s own policies which are backed by the judiciary, media, and military control. 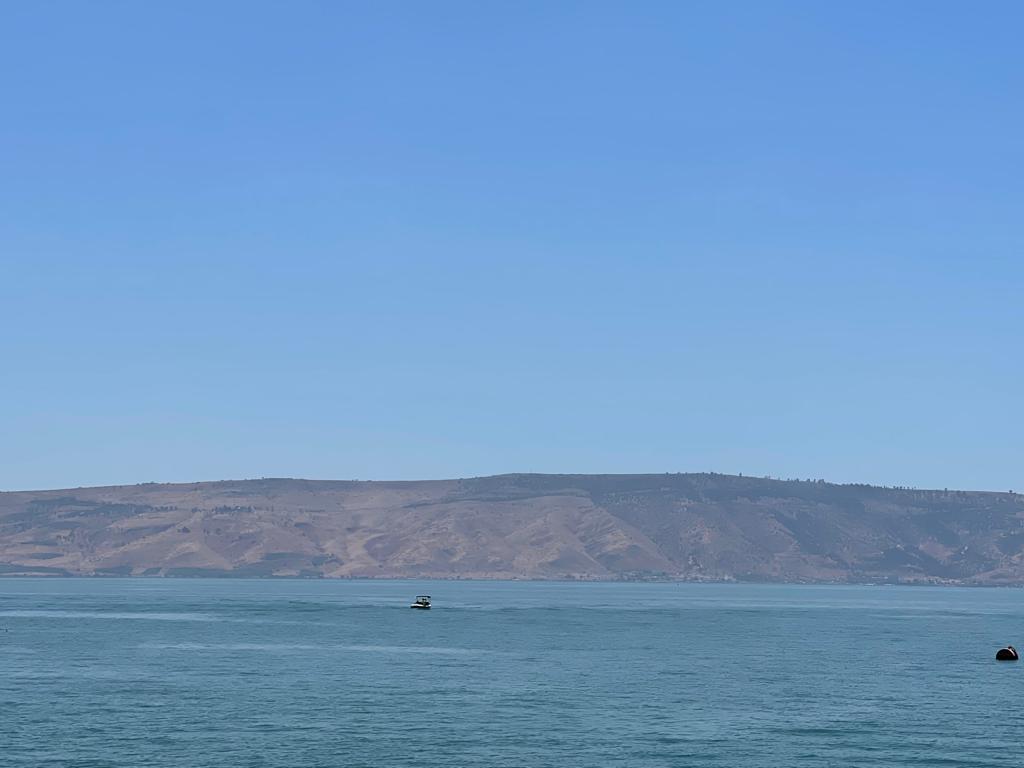 In the case of the drowned Raed Mahamid, things were no different. Without the popular movement and the widespread volunteering for the rescue, it would not have been possible to imagine that the state would use its most modern devices to recover his body.

The lessons of this case are not limited to this aspect. Rather, it is a moment to recognize the enormous and diverse energies that multiply the impact of Palestinian action, and which attest to the power and influence possessed by the community if they made self-organization a priority.

During the search for Mahamid, the tents in which people gathered turned into a greenhouse for creative ideas. There was a consensus around the need to establish a popular, Palestinian emergency response system, in coordination with Arab local authorities in areas close to the shores of the Mediterranean and the Sea of ​​Galilee.

This system would establish emergency centers ready with boats, diving suits, and other rescue equipment to ensure rapid and orderly action in cases of drowning — which unfortunately are not a small number. Such incidents most often occur during the holidays like Eid al-Fitr and Eid al-Adha, when thousands of Palestinians from the West Bank receive permits to enter the Green Line, which many then use to travel to the coastal cities. Sometimes these visits end in tragic accidents and drownings at sea, without the means to prevent them.

This mission also has a much deeper, symbolic effect. An entire Palestinian generation has grown up in the West Bank, on the other side of the apartheid wall, who have never set foot on this side of the Green Line and have never come close to the sea in their lives. These include many descendants of Palestinian refugees from cities like Jaffa and Haifa, who have inherited the longing of their grandparents to reach the shores of the coast that they had only heard about in stories. Thus, for some, the happiness of entering the sea can sometimes threaten to turn into tragedy. 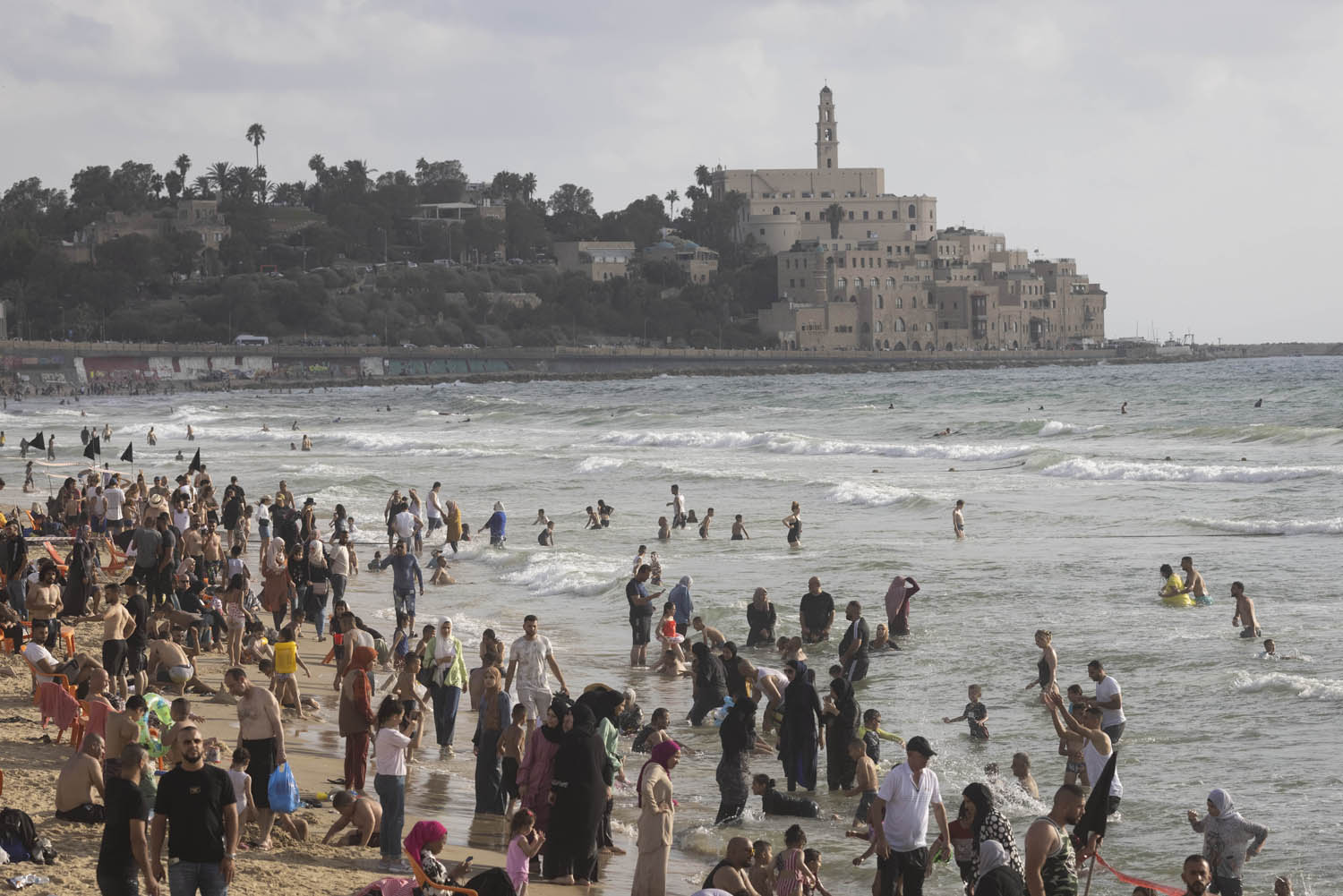 Thousands of Palestinians from the West Bank enjoy the beach in Jaffa during the Eid al-Adha holiday, July 11, 2022. (Oren Ziv)

We have seen this lesson before. In May 2020, the Palestinian dancer Ayman Safiya drowned at Atlit beach, south of Haifa, after saving a friend who was close to drowning out at sea. At the time, I was similarly struck by the phenomenon of Palestinians volunteering to search for him, including sailors from Jisr al-Zarqa, Haifa, and Akka.

Back then, like last month, there was a state of anger at the Israeli authorities, who delayed effective interventions and prevented inspections in most parts of the coast under the pretext that there were security facilities stationed in the areas. The police instead issued traffic tickets for the cars of the crowds who had come to volunteer, while the Israeli Coast Guard issued tickets for the volunteers’ boats, chased them while they were out at sea, and expelled them from the area.

The two years between the two tragedies have only strengthened the lessons in distrusting the Israeli security establishment, and increased the belief that the only path forward is self-reliance. They have also served as a vital demonstration of community support — which we often forget exists until we unite — that could prevent the next tragedy.

Ameer Makhoul is a writer and political activist from Haifa. A former political prisoner, he has worked at the Institute for Palestine Studies, directed the NGO Ittijah, and headed the High Follow-Up Committee's Popular Committee for Defending Freedoms.