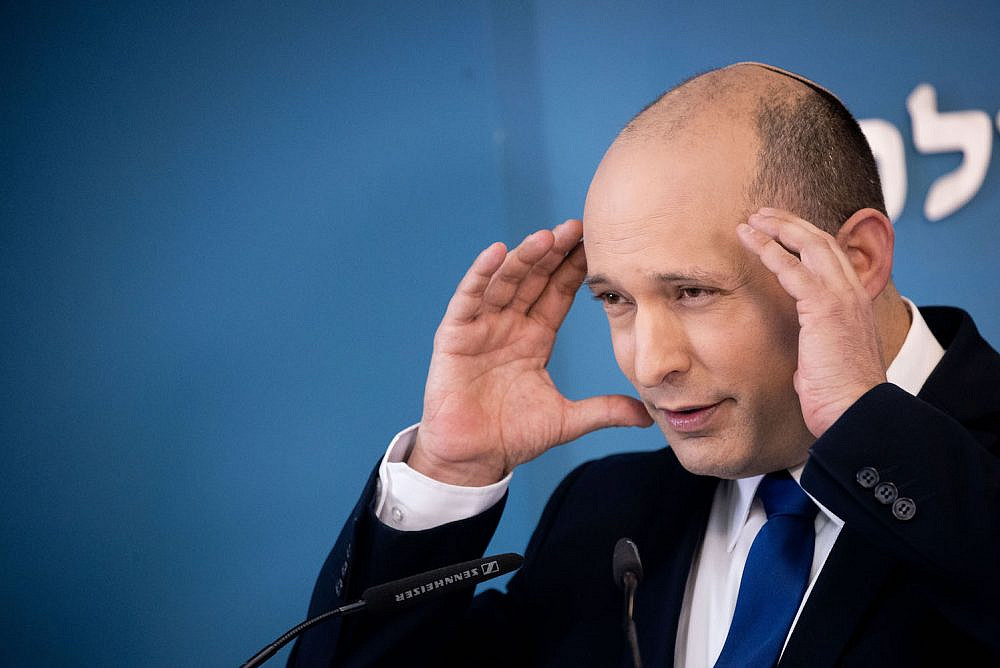 Last week was a good one for Naftali Bennett, perhaps one of the best since he became prime minister more than three months ago. Bennett — who has turned delivering the final death blow to the two-state solution into a central pillar of his policies — was likely smiling wide when he saw how, in just the span of a few days, both the White House and Congress handed him a series of political victories.

The week began with President Joe Biden delivering a speech to the UN General Assembly, in which he said that while his administration still supports a two-state solution, it was still a “long way” from becoming a reality. With these words, Biden effectively affirmed that the White House will not be expending political capital on getting Israel and the Palestinians to the negotiating table. It has also been reported that Bennett won’t be giving much attention to the Palestinian issue when he speaks before the General Assembly on Sunday.

Biden’s declaration was strengthened by a Senate Foreign Relations Committee hearing for Thomas Nides, the former managing director and vice chairman of Morgan Stanley, who has been tapped by the president to be ambassador to Israel. Nides sailed through his hearing (he has yet to be officially confirmed), receiving bipartisan praise for announcing that he would strengthen Israeli security, expand economic relations between the two countries, and support the Abraham Accords, among other issues. While Nides paid lip service to the prospects of using “existing and future agreements to make tangible improvements for the Palestinian people,” it is extremely unlikely that this will amount to any significant change on the ground for Palestinians living under Israeli military rule.

And then came the Iron Dome bill in the House of Representatives. After progressives in the Democratic Party were able to cut out a proposal to send Israel $1 billion in funding for its missile defense system — in addition to its yearly $3.8 billion in military aid — as part of a larger stopgap government funding bill, moderate Democrats brought a second bill to the floor of the House that would provide that $1 billion. By the time the second vote came around, and following intense criticism from both Republicans and moderate Democrats, the progressive wing had split. Only nine of 435 representatives voted against “replenishing” Israel’s Iron Dome capabilities, with Rep. Alexandria Ocasio-Cortez — who has called Israel an “apartheid state” — eventually switching her vote from “no” to “present,” angering many who had viewed her as an ally of the Palestinian struggle.

The UN speech, Nides’ confirmation hearing, and the Democrats’ Iron Dome debacle is fantastic news for the Israeli prime minister. Bennett — a former head of the Yesha Council, the umbrella organization that represents the interests of the settlement movement — has spent his entire career opposing the establishment of a Palestinian state, and has recently declared that he intends on maintaining the occupation by pursuing a strategy of “shrinking the conflict.” In other words, Bennett’s plan is to deepen the so-called status quo — and thus Israel’s apartheid policies.

It has been revealing to witness just how much credit the prime minister has been receiving in the elite circles that had so despised his predecessor Benjamin Netanyahu, despite the former’s unvarnished declarations to continue Israel’s half-century military dictatorship over the Palestinians. That neither the White House nor Congress are conditioning any aid to Israel on steps to try and end the occupation is a testament to just how recklessly little American leaders care about Israeli intentions or Palestinian lives.

Perhaps more than anything, this last week is a clear signal that, whether it’s Trump or Biden, or whether it’s Bibi or Bennett, there is hardly anyone with any modicum of power who will stand up and say enough to Israel’s accelerating, endless military rule. For now, Washington remains committed to ensuring that time is on the side of apartheid.