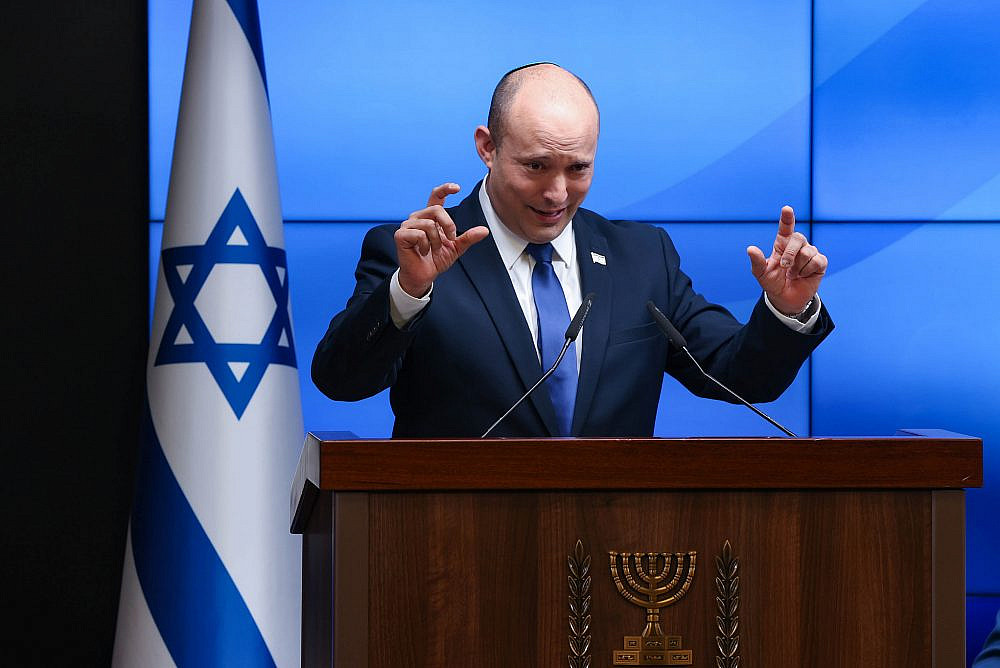 Israel’s governing coalition is today home to two solidly right-wing parties, Yamina and New Hope, headed by two men who believe in the concept of a Greater Israel stretching from the river to the sea. Prime Minister Naftali Bennett entered the national political scene after heading the Yesha Council — the umbrella organization that attends to the needs of West Bank settlements — and after years of challenging Benjamin Netanyahu and his Likud party from the right. Justice Minister and former Likudnik Gideon Sa’ar, who originally began his political journey with Tehiya, an ultranationalist party founded in the 1970s, was always considered a hawk and an outright supporter of annexation.

Yet in the lead-up to the new government, or perhaps immediately after its formation, both Bennett and Sa’ar seemed to have given up on the idea of West Bank annexation, whether full or partial. Instead, they have adopted a different strategy: “shrinking the conflict.”

Sa’ar was among the first in the coalition to adopt this position. Early on during the last election cycle, while he was leading in the polls and seemed to have a fighting chance of beating Netanyahu, Sa’ar articulated his position through the New Hope party’s platform.

“There will be no permanent settlement that will end the Israeli-Palestinian conflict in the foreseeable future,” read the platform’s section on security. “But we can implement policies for shrinking the conflict without compromising Israel’s security… [by] improving the conditions of border crossings for [Palestinian] workers using new technologies, streamlining the Palestinian employment system in Israel, regulating the electricity and energy sector, streamlining Palestinian imports and exports, and more.” 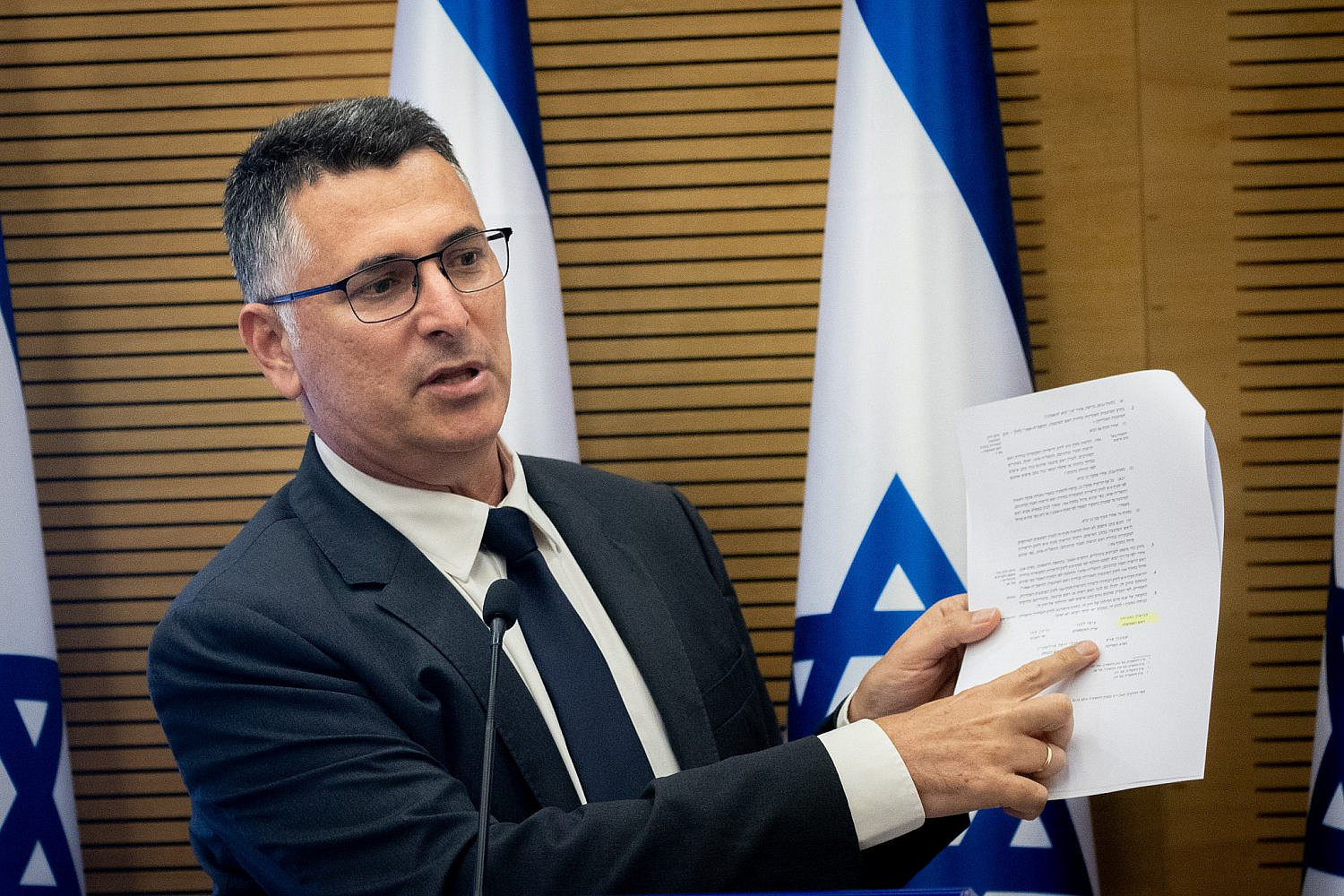 Head of the New Hope party Gideon Saar leads a faction meeting at the Knesset in Jerusalem, July 26, 2021. (Yonatan Sindel/Flash90)

Bennett waited until the coalition was formed to say similar things. In an interview a few days after the government was sworn in, Amit Segal, Channel 12’s chief political correspondent, challenged Bennett on his past statements, particularly one in which the new prime minister likened the Palestinians to “shrapnel in the ass.”

“This is a statement that I would change in retrospect,” Bennett told Segal. “To the point, we need to tell the truth. The national conflict between the State of Israel and the Palestinians is not over territory. The Palestinians do not recognize our very existence here, and this will likely accompany us for some time… but my view in this context is to shrink the conflict. Wherever [there can be] more crossings, higher quality of life, more business, more industry — we will do it.”

The use of the term “shrinking the conflict” is not accidental. Bennett reportedly speaks regularly with Dr. Micah Goodman, the author of the book “Catch-67: The Left, the Right, and the Legacy of the Six-Day War” who is considered the prophet of this strategy. In a 2019 article in The Atlantic, Goodman argued that the Israeli left has failed to end the occupation and establish an independent Palestinian state, while the right has failed to implement the idea of a Greater Israel. Instead of talking about ending the conflict or continuing the status quo, he concludes, Israelis should look for ways to “shrink the conflict.”

Goodman’s ideas even led to the establishment of a NGO called “Shrinking the Conflict” to promote specific measures such as streamlining Palestinian work permits in Israel, increasing Palestinian independence in energy, and more. Unsurprisingly, these policies are remarkably similar to what was written in Sa’ar’s party’s platform.

It’s difficult to be sure of just how much these ideas are influencing Bennett and other ministers; and in some ways, several of these measures build on Netanyahu’s early “economic peace” approach. But there is no doubt that Goodman’s concept is setting the tone. It is reported that, in his upcoming meeting with U.S. President Joe Biden, the Bennett may present a 120-day plan built around this strategy. His decision yesterday to approve construction permits for 800 housing units for Palestinians in Area C, alongside approving 2,000 housing units in Israeli settlements, could be a part of this plan. 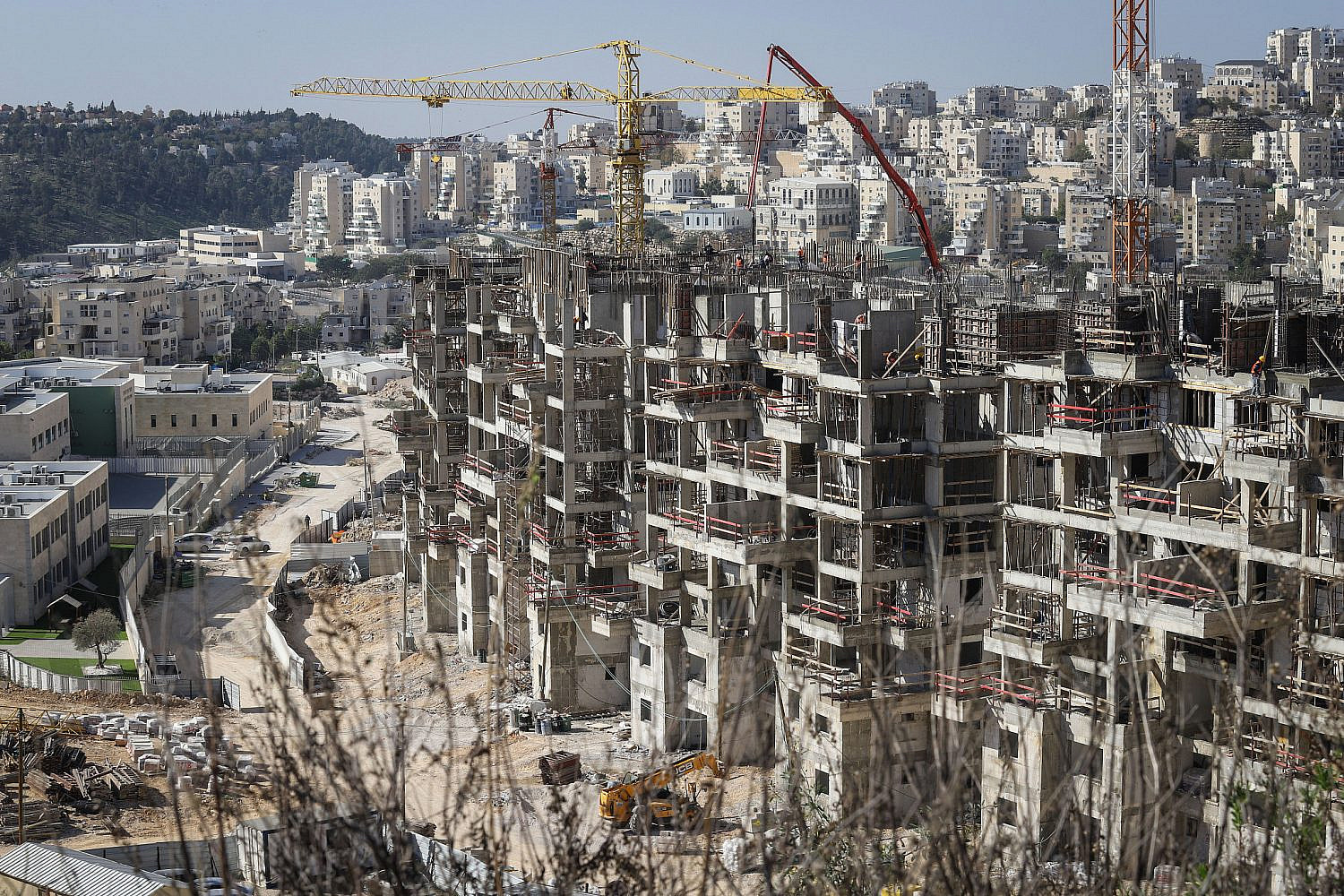 One could reasonably believe that the very fact that right wingers like Bennett and Sa’ar are embracing Goodman’s concept stems from a deep ideological crisis on the Israeli right. After more than 20 years of near-continuous rule, the right has largely succeeded in erasing the Green Line both physically and psychologically. But beyond this achievement, it has not been able to formulate a clear vision of where it wants to take the conflict or what solution it offers.

For the past decade, the settler right and the national right (led by Likud and Shas) have cultivated the idea of “applying Jewish sovereignty” — that is, annexation and institutionalized apartheid — as some magic solution. But this vision imploded after Netanyahu announced the Abraham Accords last year, just as it seemed that the government had paved the path to de jure annexation thanks to the inclusion of centrist parties, Palestinian political weakness, and a green light from the Trump administration.

It is also worth noting that just by using the term “shrinking the conflict,” Bennett himself is shifting his own positions by openly admitting that the struggle with the Palestinians in fact has a significant influence over Israeli lives. Bennett comes from the school of thought that believes Israel needs to decisively win the conflict. Two years ago, for example, as head of the New Right party, he promised to “defeat Hamas;” but now as prime minister, he has changed his war-mongering tune. For a man like Bennett, that’s almost an admission of a mistake.

Bennett’s decision to stray from his hardline settler past is also evidenced by his political appointments. While Interior Minister Ayelet Shaked, a long-time political ally to the prime minister, appointed Yair Hirsch, a resident of an illegal West Bank outpost whose home is slated for demolition, as her ministry’s director general, Bennett seems to prefer individuals who are not identified with the religious-settler camp in which he was raised. 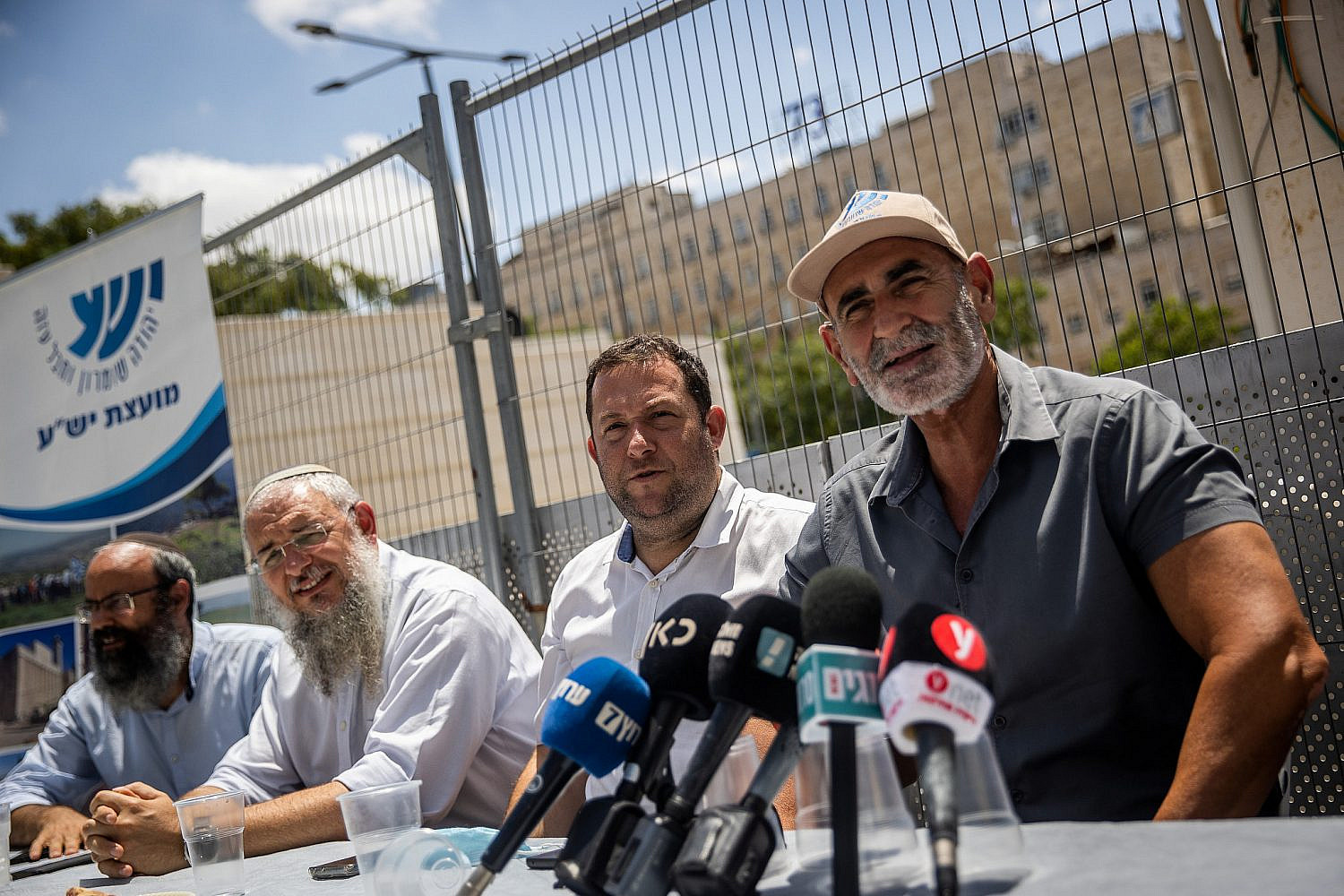 Judea, Samaria, and the Jordan Valley heads of councils attend a press conference of the Yesha Council outside the Prime Minister’s Office in Jerusalem, August 12, 2021. (Yonatan Sindel/Flash90)

For example, not much is known about Dr. Eyal Haluta, Bennett’s new National Security Advisor, but he is certainly not identified with the right — unlike his predecessor, Meir Ben Shabbat, who Netanyahu effectively used to strengthen the right’s rule. The appointment of Mike Herzog, the brother of the new president Isaac Herzog and by no means a classic right winger, as Israel’s ambassador to the United States is an even clearer signal of Bennett’s approach.

Needless to say, despite Bennett’s and Sa’ar’s new strategy, the conflict with the Palestinians has no intention of shrinking. Just before the government’s formation, we saw a war in Gaza, bloody violence in Israel’s so-called “mixed cities,” and Palestinian deaths at the hands of Israeli soldiers and settlers across the West Bank. Since Bennett was sworn in as prime minister on June 13, soldiers have killed at least nine Palestinians in the West Bank, including three minors and one woman — a rate of one Palestinian a week.

Espousing the “shrinking” of the Israeli-Palestinian conflict is not only disconnected from reality, it is downright dangerous. Firstly, it propagates the assumption that the conflict is a natural phenomenon that exists as an inevitable result of Jewish presence between the river and the sea, or because Palestinians “do not recognize our presence here,” and therefore there is no solution and the best we can do is minimize the conflict’s influence. In effect, Goodman’s approach isn’t about “managing” the conflict à la Netanyahu — it’s about managing the occupation.

Moreover, the idea blatantly ignores the fact that the “conflict” itself is vastly unequal. One side has a state, an army, and national and civil rights, while the other side has none of these. Shrinking the conflict therefore assumes that the “natural” state of the land is one that inherently affords privileges to Jews, while forcing Palestinians to remain in an inferior position ad infinitum. 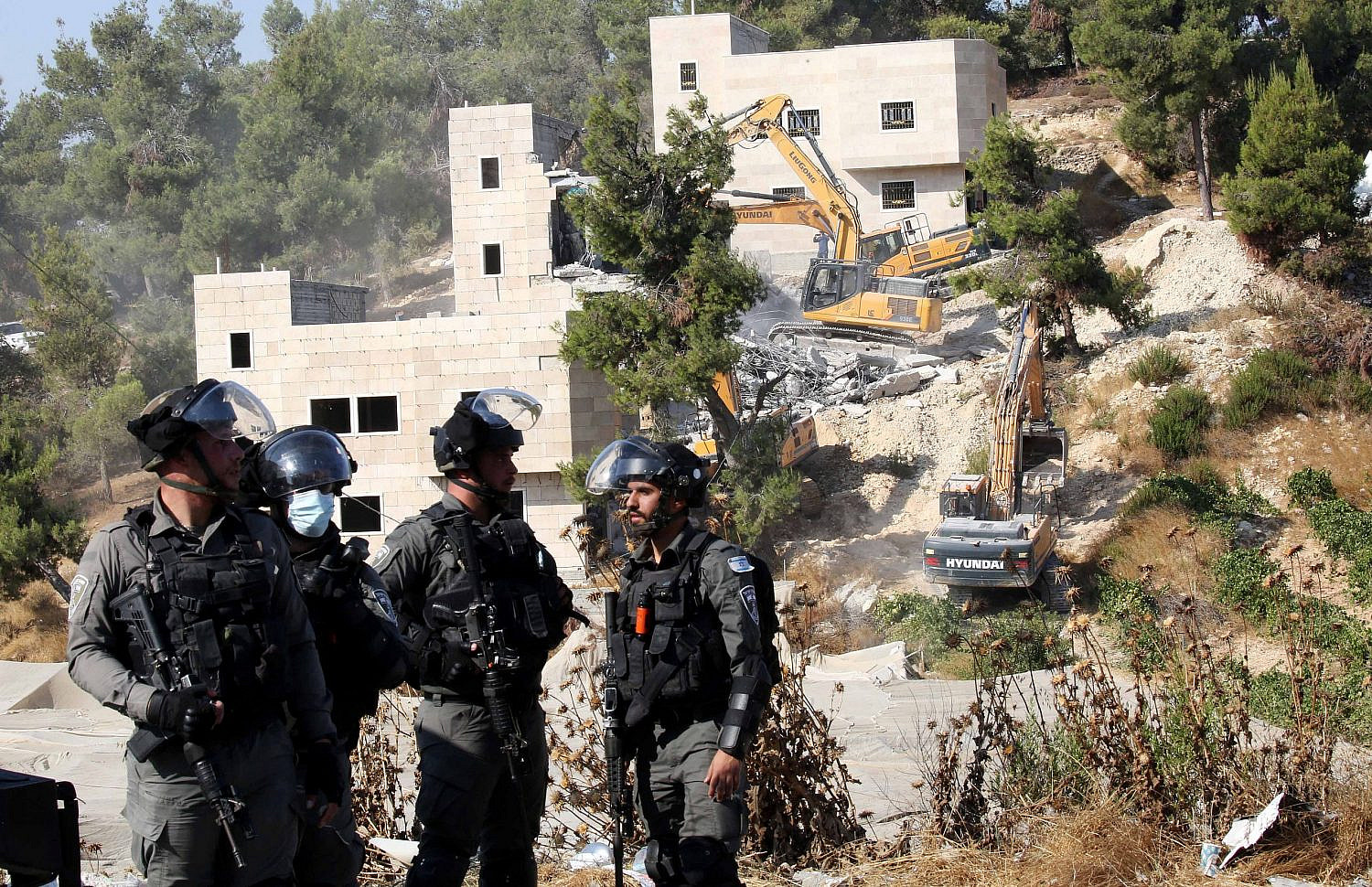 The danger also lies in the fact that the theory may be taken up by those who, at least in principle, oppose the occupation and support the idea of two states but do not believe it will be accomplished any time soon, such as Foreign Minister Yair Lapid.

“It is no secret that I support a two-state solution,” Lapid told the EU Foreign Affairs Council during a meeting in Brussels last month. “Unfortunately, there is no current plan for this… What we need to do now is make sure that no steps are taken that will prevent the possibility of peace in the future, and we need to improve the lives of Palestinians. Whatever is humanitarian, I will be for it. Everything that builds the Palestinian economy, I am for it.” Lapid didn’t say it, but the idea of “shrinking the conflict” clearly underlies those remarks.

Even Regional Cooperation Minister Issawi Freij (Meretz), who has no interest in seeing the occupation continue, accepts this approach implicitly. “It is our duty to ensure the stability of the Palestinian Authority, even if it is clear to me that there will be no Palestinian state and no agreement in the next four to five years,” he told Local Call reporter Lily Galili last month. In the absence of any possibility for a resolution, he said, the only thing to do is to improve the lives of Palestinians.

None of this means that the left shouldn’t try to reap the benefits of the ideological crisis plaguing right-wing politicians like Bennett and Sa’ar, even if the crisis stems from their inability to realize their ambitions rather than a change in their values. The question is how to do so. How can we exploit the right’s ideological weakness in order to strengthen the Palestinians and weaken Jewish supremacy? There are no simple answers, but thinking on this is required.