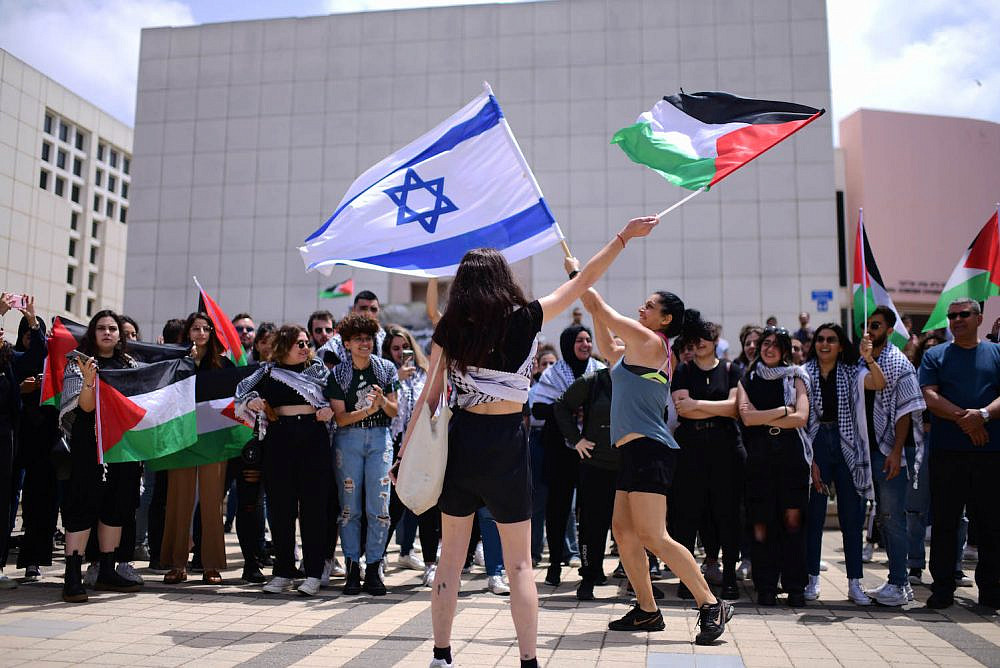 Israeli right-wing activists demonstrate next to Palestinian and left-wing Israeli students during a rally marking the anniversary of the Nakba, Tel Aviv University, May 15, 2022. (Tomer Neuberg/Flash90)

On Nov. 25, a group of Israeli leftists, made up of religious and non-religious activists, were on a tour of Hebron in the occupied West Bank when, after hours of walking around, they came upon several soldiers. One soldier began pummeling and punching one of the activists, while another gloated to a camera about his belief that Itamar Ben Gvir, Israel’s incoming national security minister and a resident of the adjacent settlement of Kiryat Arba, would put an end to left-wing tours in the city.

The incident dominated Israeli headlines for much of the following week, though local media outlets tended to focus almost entirely on the altercation alone and the punishment meted out to the soldier (10 days of jail time, which was later cut down to six following public pressure). Hardly any touched on the reason why the activists were there in the first place: to learn about the humiliation, suffocation, and arbitrary policies that the city’s Palestinian residents go through on a daily basis at the hands of Israeli soldiers and settlers, and to show solidarity.

In the midst of the media firestorm, right-wing Israeli politicians and journalists have been normalizing various phrases and terms — some old, some new — against Israeli leftists. While some of these expressions have been used to denigrate anyone who criticizes the occupation, today they are becoming even more mainstream. As a public service, I compiled a list of these new terms into a dictionary:

“Terror supporters/antisemites.” This term applies to everyone who opposes the occupation and apartheid. When every kind of Palestinian action is deemed a form of “terrorism” — boycotts are “economic terrorism,” unarmed protests are “popular terrorism,” and United Nations resolutions are “diplomatic terrorism” — anyone who even thinks of supporting the Palestinian struggle for liberation are inherently enemies. All those who come to Sheikh Jarrah, Masafer Yatta, the Jordan Valley, Lydd, or any other place to express solidarity with Palestinians are thus automatically branded. Just last week, Ben Gvir called Israeli journalist Israel Frey a “terror supporter,” after the latter was fired from his job at DemocraTV over a tweet in which he made the basic distinction between Palestinian violence that targets soldiers and policemen, versus that which targets civilians.

“Anarchists.” This is a nickname used to denigrate any left-wing activist, regardless of their political worldview or whether they even ascribe to anarchist politics. There are indeed several hundreds of anarchist activists in Israel, with the term elevated in the public discourse with the establishment of “Anarchists Against the Wall,” an Israeli direct action group that joined the Palestinian popular struggle against the occupation and settlements, and in some cases even took part in sabotaging the separation barrier.

While the group’s activities have decreased over the last decade, its name has become the right’s catchall phrase to describe the left writ large. The aim was to delegitimize anti-occupation activists by presenting them as violent lawbreakers and opponents of the state.

One of the first instances of this broad use of “anarchists” was in a report produced in 2018 by the far-right organization Ad Kan, which came to prominence by planting moles in Israeli anti-occupation groups such as Breaking the Silence and Ta’ayush. According to their report, “A group of Israeli anarchists, Palestinians, and foreigners from abroad — armed with cameras — regularly go out on the same day and at the same time to disturb IDF soldiers. They harass the soldier… and sometimes even throw stones and burn tires. This whole show has one goal: to document the soldiers’ reactions and then publish it around the world to discredit the State of Israel and the IDF.”

“Provocations.” This refers to any action, whether passive or nonviolent — such as documenting or simply sitting on the ground — which has the purpose of protesting soldiers or settlers. Last week, right-wing MKs and journalists flung baseless accusations at the Israeli activists in Hebron, claiming they were committing grievous acts against the soldiers like cursing, spitting, and hitting — in short, trying to blame the activists for provoking a response.

It is telling that Hebron is networked with surveillance cameras, and soldiers and settlers frequently document what takes place; yet all we can see in all the documentation of that Friday is violence by the soldiers. Even the army, which is not known for its sympathy for left-wing activists, was unable to muster much beyond the pale accusations of “provocations.” It is still unclear what part of the activists’ behavior amounted to “provocation” beyond their mere presence.

“Friction.” Any incident in which settlers commit violence against Palestinians or left-wing activists. This term is frequently used by the IDF Spokesperson to emphasize that there were two sides to the incident, and that the army had to come in to “separate” between the two, as it did after hundreds of settlers attacked Palestinians last month during a Jewish pilgrimage to the city. Note that when Palestinians do the attacking, the army immediately uses the word “riots.”

“Instigators.” Another name for an anti-occupation activist who organizes tours to show the Israeli public the reality of the West Bank. This is a relatively new concept that resurfaced following the latest arrest of Issa Amro, a Palestinian activist from Hebron who documented the attack against the left-wing activists. The police representative said that “the suspect [Amro] is a kind of instigator. At the end of the day the delegations that come to tour [the area] create friction.”

“Obstructing soldiers.” Similar to “provocations,” this term refers to any act of resistance to the occupation or to the existing order. Ben Gvir’s Otzma Yehudit (Jewish Power) party claims it will pass a law that will punish anyone who obstructs a soldier in the line of duty with up to three years in prison. If this law had existed a decade or two ago, Ben Gvir and his friends would likely have already sat many stints behind bars. But like the other aforementioned terms, this one solely applies to Israeli leftists and Palestinians.

“Hamas Europe.” A code name implying that left-wing activists and organizations are not only funded by European money, but are also operated by the militant Palestinian Islamist movement Hamas. This term came into being after Israel’s Channel 13 ran an investigation that showed how a European activist infiltrated the International Solidarity Movement (ISM), a group that brings in people from around the world to participate in nonviolent protests throughout the West Bank. The investigation falsely claimed it had shown a connection between ISM, Hamas, and left-wing Israeli organizations. And yet, for right-wing politicians, the absence of evidence didn’t matter.

In a recent radio interview, Religious Zionism MK Orit Strock said: “There are left-wing groups that shouldn’t be allowed anywhere because there is solid intelligence [which she did not present] that they are operated by hostile organizations — including terrorist organizations such as Hamas Europe — such as ISM.” When asked to name an Israeli organization that is active in Hebron and supported by Hamas, Strock mentioned only ISM, which is not an Israeli group. MK Ofir Sofer, also from Religious Zionism, repeated Strock’s claims in a different interview, and curiously had difficulty naming even a single left-wing group that he finds legitimate.