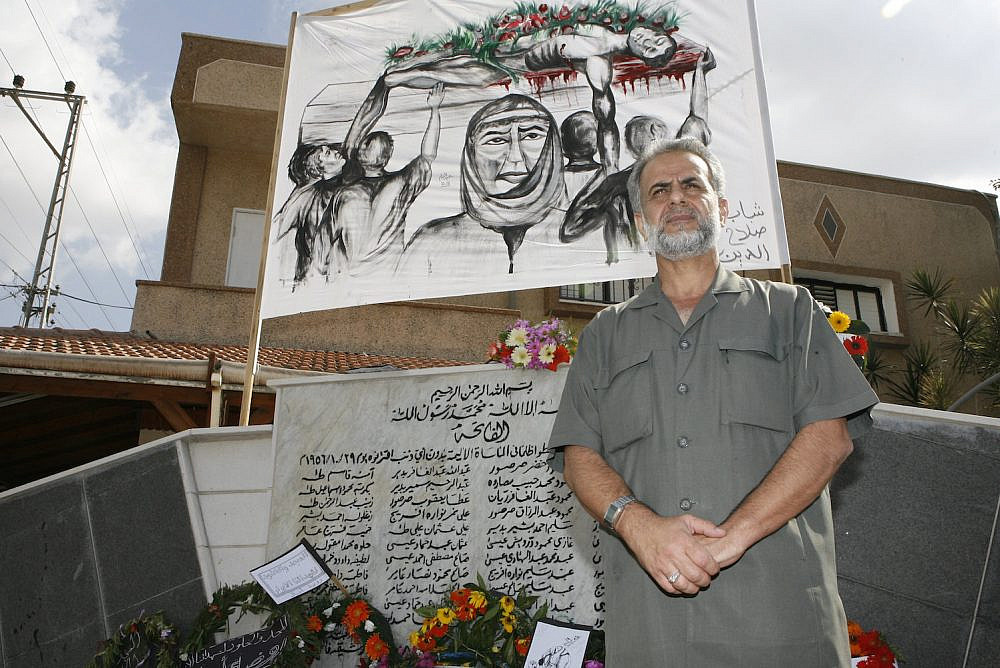 Knesset Member Ibrahim Sarsur stands by a monument for the victims of the Kufr Qasem massacre, October 28, 2007. (Michal Fattal/Flash90)

Reading the trial transcripts of the Kufr Qasem massacre, which were fully released on Friday after an arduous and decades-long battle, was more harrowing than expected. The infamous killings — in which Israeli soldiers gunned down 49 Palestinian citizens returning home from work after a curfew change was declared in October 1956 — has long left a dark mark in the community’s consciousness, most of all for the victims’ families, for whom the massacre casts a heavy shadow to this day.

Excerpts from the military trial in 1957 — much of which had been known already but ignored in public debate — suggest the perpetrators were ambivalent, and perhaps even unapologetic, about their actions. One officer testified that his commander stated “It is desirable that there be some fatalities” if anyone breached the curfew, with other soldiers affirming that this was ordered “so that some [Palestinians] run away [to Jordan] and those who stay become more loyal to the state and sit quietly.” In short, acts of violence were deliberately encouraged to send Palestinian citizens, who were governed by military rule until 1966, a clear ultimatum: embrace your own expulsion, or submit to your subjugation.

The banality with which these words were spoken in the trial is one of the chapter’s most disturbing aspects. Yet perhaps even more troubling is that — after years of advocacy by Kufr Qasem’s residents, Palestinian activists and scholars, and NGOs like Akevot, which successfully appealed for the transcripts’ release — the latest revelations have hardly dented the Israeli public consciousness. In fact, despite demands for a national reckoning with the crime, it is more likely that much of Jewish-Israeli society, like the soldiers in 1957, will be indifferent at best and remorseless at worst.

The reason for this was astutely laid out on +972 by scholar Seth Anziska just days before the Kufr Qasem documents were made public. In a review of a film about an Israeli war crime during the 1982 Lebanon invasion, Anziska argued that the “red line” for Israeli shame of such violence has greatly eroded as Jewish society further internalizes the impunity it has enjoyed since the Nakba. “What might have once been seen as a ‘black flag’ order that necessitates refusal is now defended in many corners,” he wrote, “a clear indicator of where Israeli moral decay has led.”

As the Kufr Qasem trial shows, that moral decay was never an accidental byproduct of Israel’s growth; it was, and remains, a bedrock of the state’s existence. From the slaying of residents at Deir Yassin in 1948 to the mowing down of protesters along the Gaza fence in 2018, cruelty and violence are intentionally employed to preserve Jewish supremacy, ensuring political and demographic dominance while keeping Palestinians trapped in their cages — or better yet, cleansed from their land. The growing clarity of that fact will not convince Israelis to hold themselves accountable, but it may move others to recognize what Palestinians have been saying about their oppressors.