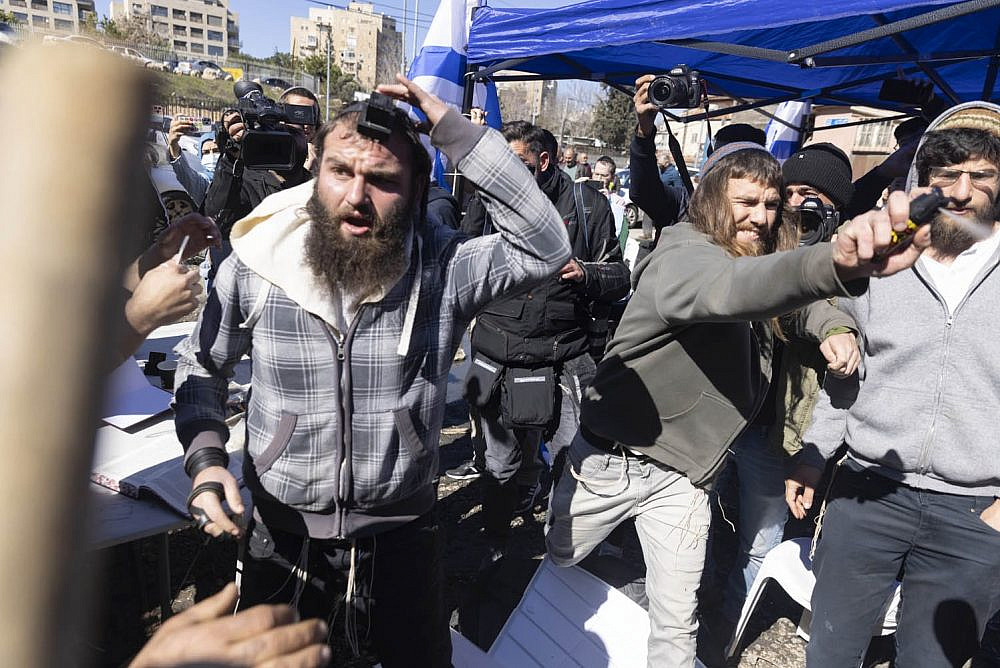 Settlers attack Palestinians in the Jerusalem neighborhood of Sheikh Jarrah after far-right MK Itamar Ben Gvir set up a makeshift parliamentary office in front of the Salem family home on February 13, 2022. The Salems are under imminent threat of expulsion. (Oren Ziv)

Last week, +972 Magazine teamed up with The Intercept and Local Call for a deeply-reported story on how Israeli forces killed three young Palestinian men — members of Al-Aqsa Martyrs Brigades — in broad daylight in Nablus on Feb. 8. While authorities claimed the Border Police officers responsible for the deaths were only returning fire as they attempted to arrest the three, eyewitness testimonies and a video released days after the killings leave no room for doubt: the officers were on an assassination mission.

The atmosphere in Nablus remained fraught the day after the assault, with many residents too shocked and afraid to speak. Since the Second Intifada, Israel has almost completely ceased conducting targeted assassinations in the West Bank, and there was growing concern among Palestinians that the army might be bringing back the policy. Family members of two of the slain Palestinians even said that in the months leading up to the assassination, they had received repeated, threatening phones calls from the Shin Bet demanding they turn in their children or siblings — “or else.”

As we were carrying out our investigation, the army killed another two Palestinians. On Sunday, soldiers fatally shot Muhammad Akram Ali Taher in the northern West Bank, during a punitive home demolition; the house belonged to a Palestinian suspected of involvement in the murder of a settler in the extremist Homesh outpost. The following Wednesday, soldiers shot and killed Nihad Amin al-Barghouti in the village of Nabi Saleh.

Does the assassination in Nablus truly signal an attempt by Israel to light a powder keg in the West Bank? Hanan Ashrawi, a member of the Palestinian Legislative Council, believes it does. “It was an act of provocation meant to convey a message to Palestinian leaders that ‘we are the boss,'” she said. “They talk about reducing the conflict, but they are expanding it.”

Meanwhile, far-right Member of Knesset Itamar Ben-Gvir was, for the second time, busy building a makeshift “parliamentary office” — which effectively functioned as a settler outpost — in Sheikh Jarrah, this time in front of the home of the Salem family. The Salems, who have faced repeated violence by settlers over the past month, are facing imminent expulsion from the neighborhood. On his arrival, Ben-Gvir was flanked by dozens of police officers who set their sights on the Palestinian residents of Sheikh Jarrah, rather than on Ben-Gvir and the settlers.

Both Ben-Gvir and the Palestinians remember that the last time he came to the neighborhood to make trouble, it ended in war and violence across Israel-Palestine — in Jerusalem, Gaza, Ramle, Lydd, and beyond.

The assassination in Nablus was signed off by the Israeli government. In Sheikh Jarrah, the violence is being carried out by a Kahanist “extremist.” Neither have yet brought about a redo of the events of May 2021. But if there is something we can learn from last May, it is that even sporadic incidents can lead to a surge of violence. And it is very possible that there are those in Israel — whether they are Prime Minister Naftali Bennett or MK Itamar Ben-Gvir — who are interested in just that.

Last week, the violence spread from Nablus to Sheikh Jarrah to Jerusalem’s Old City, where right-wing extremists held a small march and attacked Palestinian onlookers. As settler provocations inch closer to the Old City and Al-Aqsa Mosque, there is a greater chance the Palestinian public — whether in Jerusalem, the West Bank, Gaza, or inside Israel — will take to the streets, just as it did last year.