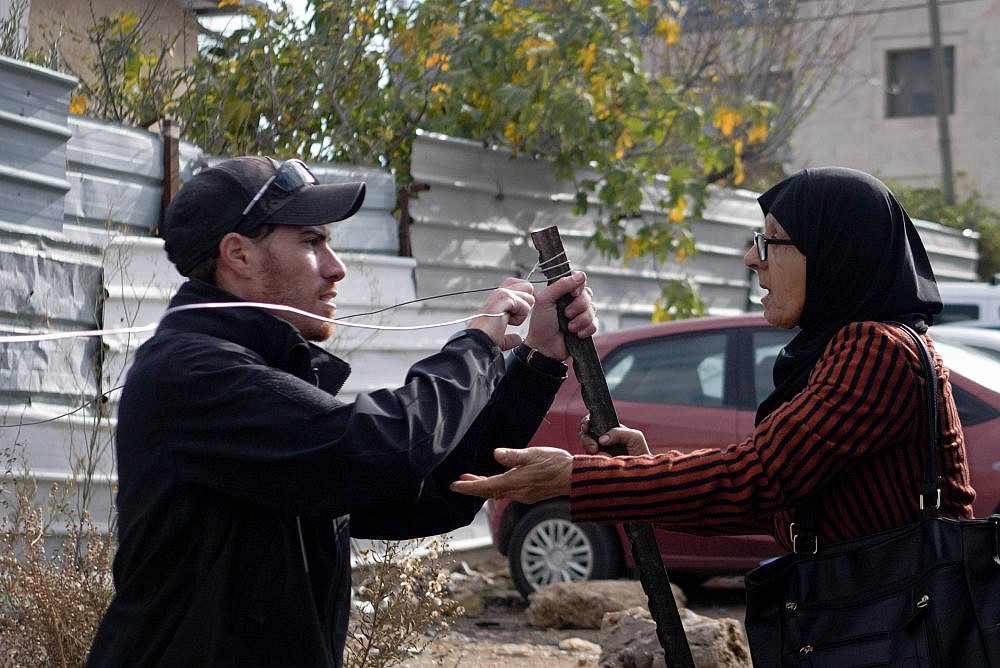 Fatma Salem argues with a Jewish settler setting up a metal fence outside her home in Sheikh Jarrah, Jerusalem, Dec. 16, 2021. (Rachel Shor)

This article has been updated to reflect the fact that the eviction order handed to the Salem family, which was originally set to be implemented on Dec. 29, has been delayed and will likely be reissued in January.

Israel is preparing to forcibly expel a Palestinian family from their home in the Jerusalem neighborhood of Sheikh Jarrah in the coming weeks. According to an eviction order handed last week to the Salem family, which comprises 11 people, the chances of thwarting the expulsion through the legal system is very low, as it is based on a final court judgment that cannot be appealed. Yonatan Yosef, a right-wing member of the Jerusalem Municipality who claims he bought the rights to the land, is set to take over the family’s home.

The residence of the Salem family — three generations who were born in the home — is located on the western side of Sheikh Jarrah. Out of the 45 Palestinian families that live in the neighborhood, 17 are facing eviction orders. The Salem family is the only one that has seen the legal process through to its conclusion, with the Jerusalem courts rejecting the residents’ appeals. If the original order was implemented to the letter, they would have been thrown into the street on December 29.

Israel’s threat to expel Palestinian families from Sheikh Jarrah was a central catalyzer of the mass protests and violence that engulfed Israel-Palestine in May, including the war on Gaza. Assuming the political echelon does not intervene to delay the decision, the family will likely be forced out of their home in the new year — the first expulsion in the neighborhood since 2017.

Fatma Salem, 69, was born in the home. “All of my memories are from this place,” she said as we sat in her living room. She lives there with her three sons and four grandchildren. On the table is an old framed photo of her eldest from his childhood; a magnet on the refrigerator shows her daughter on her wedding day, which was held in the backyard. “I raised them all here before my eyes,” she continued, “I took care of my parents here, in this room. Both of them passed away. Their smell — sometimes I walk through the house and feel it is stuck to the walls.” 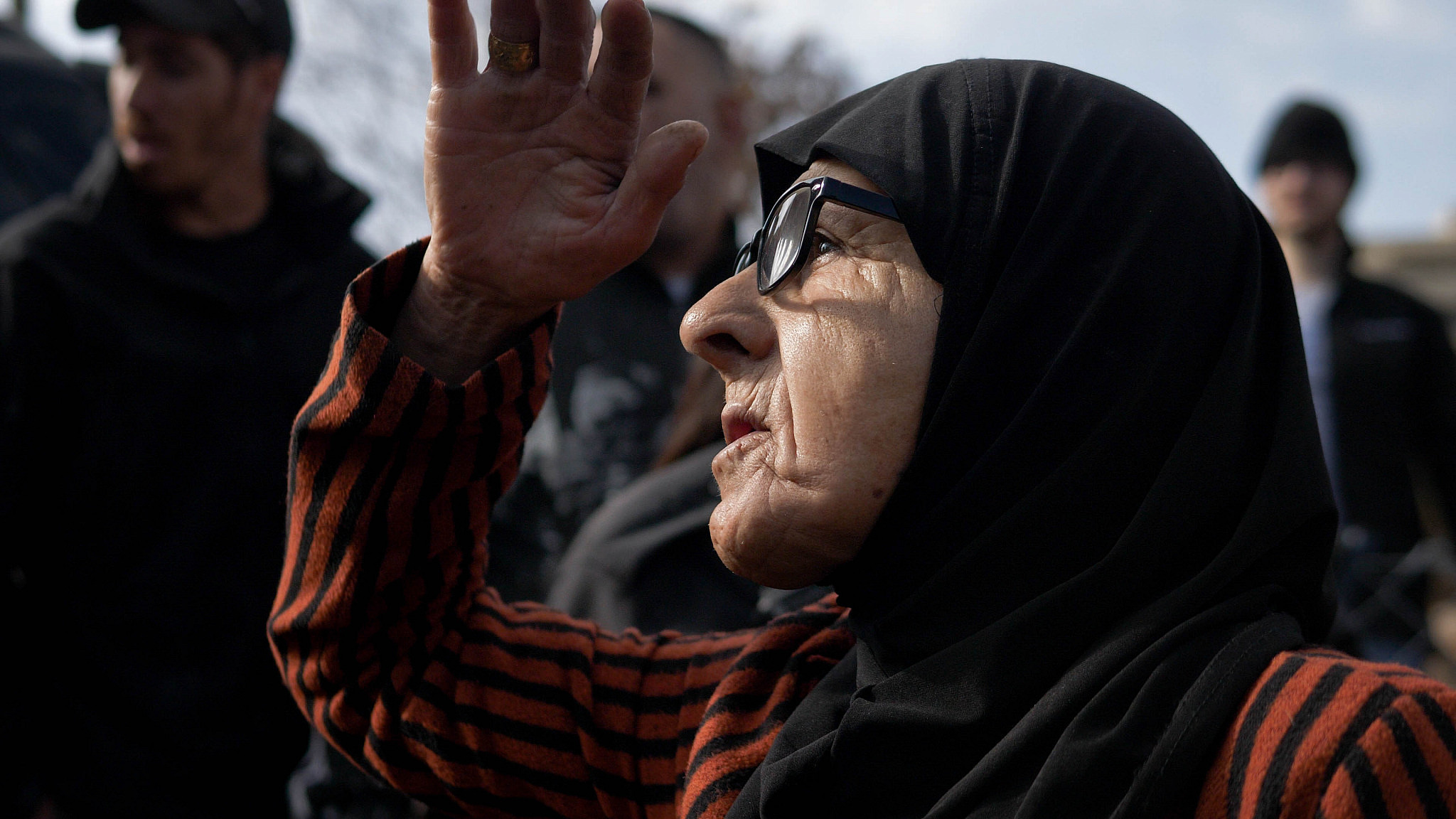 Fatma was home when she heard banging on her front door last week. She opened it and saw Jerusalem Deputy Mayor Aryeh King, holding a telephone and filming her. Next to him stood Yosef from the municipality and King’s number two official, claiming he had purchased the rights to the land from a Jewish family that lived in the home before 1948. Yosef told Fatma: “This is my home,” and handed her an eviction notice.

“Yes, this is our house and we will get it back,” Yosef replied.

“I held the order and began shaking all over,” Fatma told me. “I did not know what to think or what to do.” The eviction order is signed by the Israeli government’s Enforcement and Collection Authority, an auxiliary unit of the Justice Ministry, and is the final say in a legal process that began with the initial eviction orders given to residents of the neighborhood in the 1980s.

Update, Dec. 21: The expulsion of the Salem family has been delayed due to a technical issue. King was not authorized to hand the family the eviction order himself, forcing the municipality to annul the original order and issue a new one. The new order will likely be handed to the family in January, delaying their removal by only a few weeks. 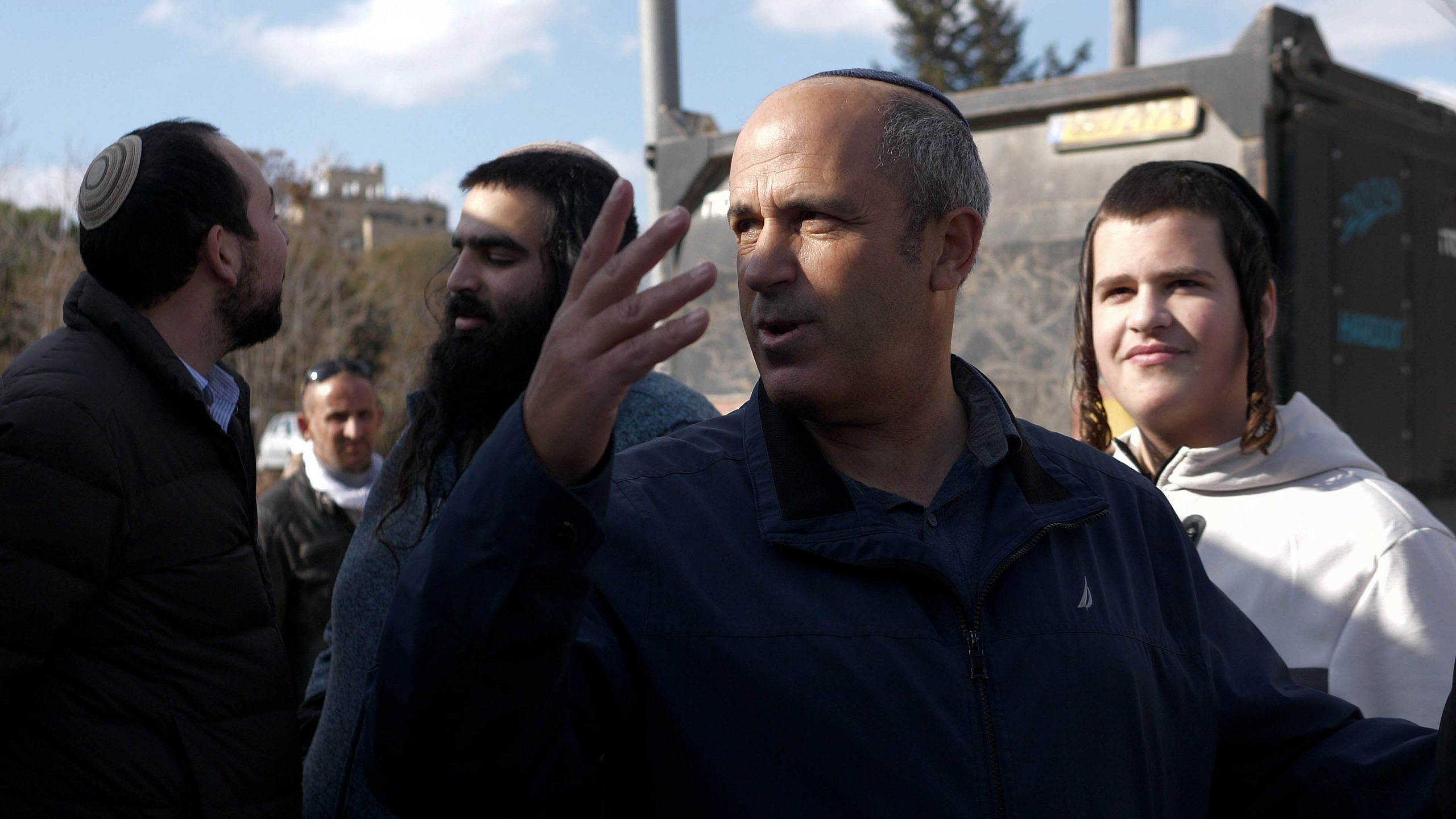 Fatma’s parents moved into the house in Sheikh Jarrah at the beginning of the 1950s, paying rent on the property to the Jordanian authorities, which controlled East Jerusalem until 1967. The settlers who are set to replace the Salems have never lived in the area; they say they bought the land from the Haddad family, a Jewish family who owned the property until 1948, when they were forced to relinquish it after the Jordanians took over following the war.

After 1967, when Israel’s occupation of East Jerusalem began, the Haddad family demanded and received the land from Israel’s Custodian of Absentee Property, the state body that took over the land of Palestinian refugees who fled or were expelled during the Nakba. The Municipality Deputy Yonatan Yosef, a former spokesperson for the Sheikh Jarrah settlers who refers to himself as “the renewer of the Jewish community in Jerusalem,” claimed that he purchased the land from Sara Asulin, a descendant of the Haddad family who lived there before 1948.

Watch. In two weeks, Israel will kick out the Salem family from their home in Sheikh Jarrah. Legal experts say there's no way to prevent it. Only urgent international pressure.

All ownership claims regarding Palestinian homes in Sheikh Jarrah are made possible through the Legal and Administrative Matters Law, which allows Jewish families who owned land in Jerusalem before 1948 to retake control of it. Right-wing groups who seek to Judaize East Jerusalem use this law to acquire land from Palestinian families, after which they expel the residents who have lived in those homes for over 70 years.

The Palestinian families facing expulsion from Sheikh Jarrah were refugees from the 1948 war, but are legally barred from reclaiming their original homes. Unlike Jews, who have a legal avenue for claiming land that was lost in 1948, Palestinians who were dispossessed during the exact same war are denied any form of recourse. This discriminatory order of business has created an absurd situation: Israelis who have never lived in Sheikh Jarrah are moving into the homes of Palestinian refugees, who are now being displaced for a second time.

The last expulsion in Sheikh Jarrah took place in 2017 against members of the Shamanseh family. Back then, Aryeh King was reportedly directly involved through his organization, the Israel Land Fund, which assisted in taking over the Shamanseh’s home. 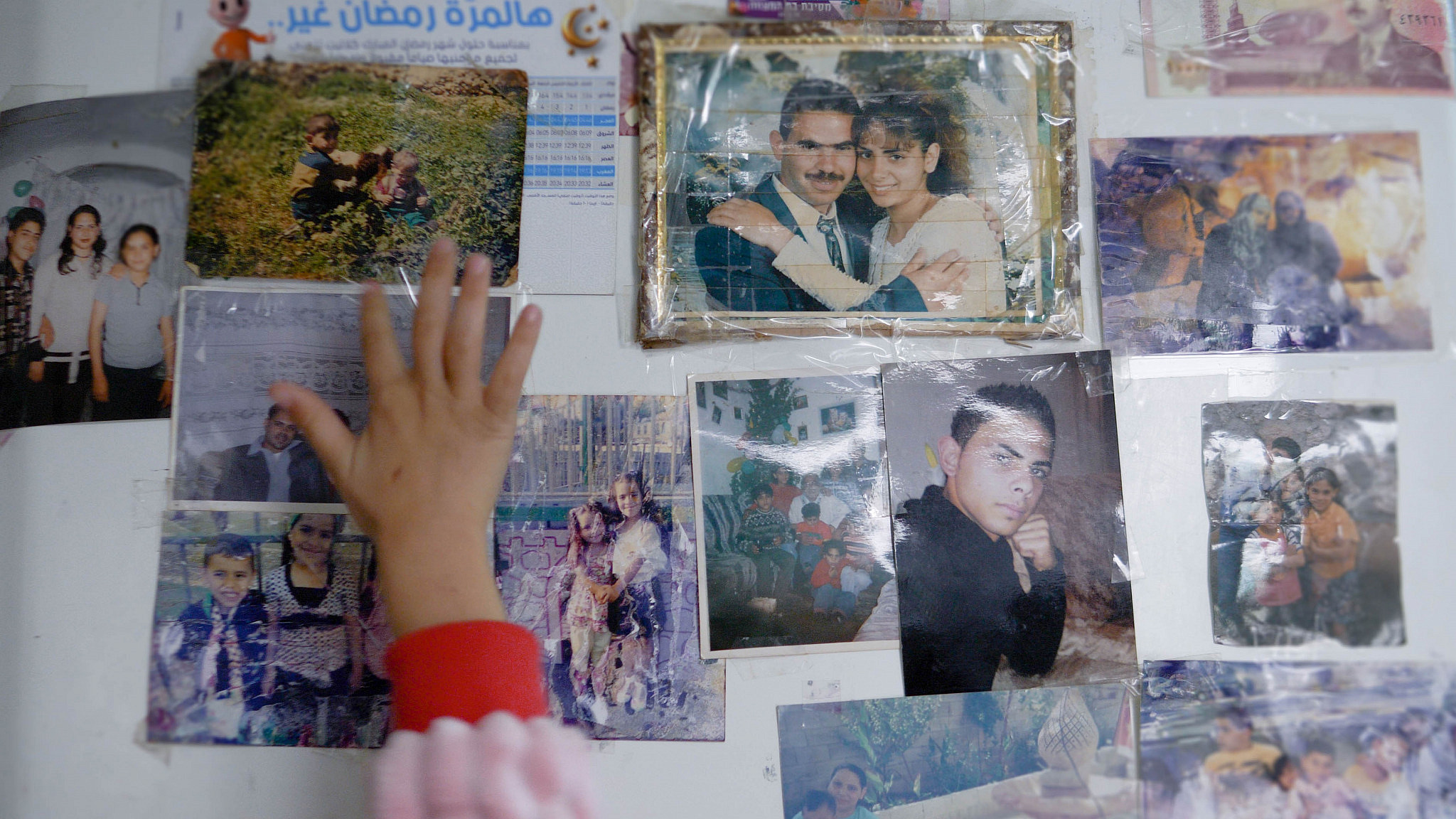 Young Fatma places her hand over pictures on the fridge in the Salem family home in Sheikh Jarrah, Jerusalem, Dec. 16, 2021. (Rachel Shor)

A source in the Israeli government told +972 that various ministries have been turning their attention to the expulsion of the Salem family due to concern over the political ramifications (developments in the neighborhood remain closely watched by Palestinians and by foreign governments). Some Israeli officials have even looked into legal possibilities for the family to further appeal the ruling, in an attempt to stall its implementation.

Israel’s Foreign Ministry provided +972 with the following response, which it said had been coordinated among all relevant government bodies: “The State of Israel is a state governed by rule of law, and the ruling of the court — which are known for their independence and the balance they provide on sensitive issues — is binding. The implementation of the ruling will be carried out by the authorities that take into account all the relevant factors, including the appropriate preparations before every move. Any attempt by extremists, and particularly the Hamas terrorist group, to exploit the situation to increase incitement, violence, and terrorism should be rejected.”

Ibrahim, Fatma’s son, who has barely slept these past weeks, sits quietly in the living room, his eyes half closed. He summarizes the Israeli legal process succinctly: “The law is against us. They want to erase our entire lives here with a piece of paper. As if our feelings are a game for them. I opened my eyes for the first time in this home. My daughter, the youngest one, plays in the same backyard where I played. Do they not understand that we are human beings?” He gets up suddenly after his four-year-old daughter, also named Fatma, begins jumping barefoot in a puddle in the yard. He calls her to come back. 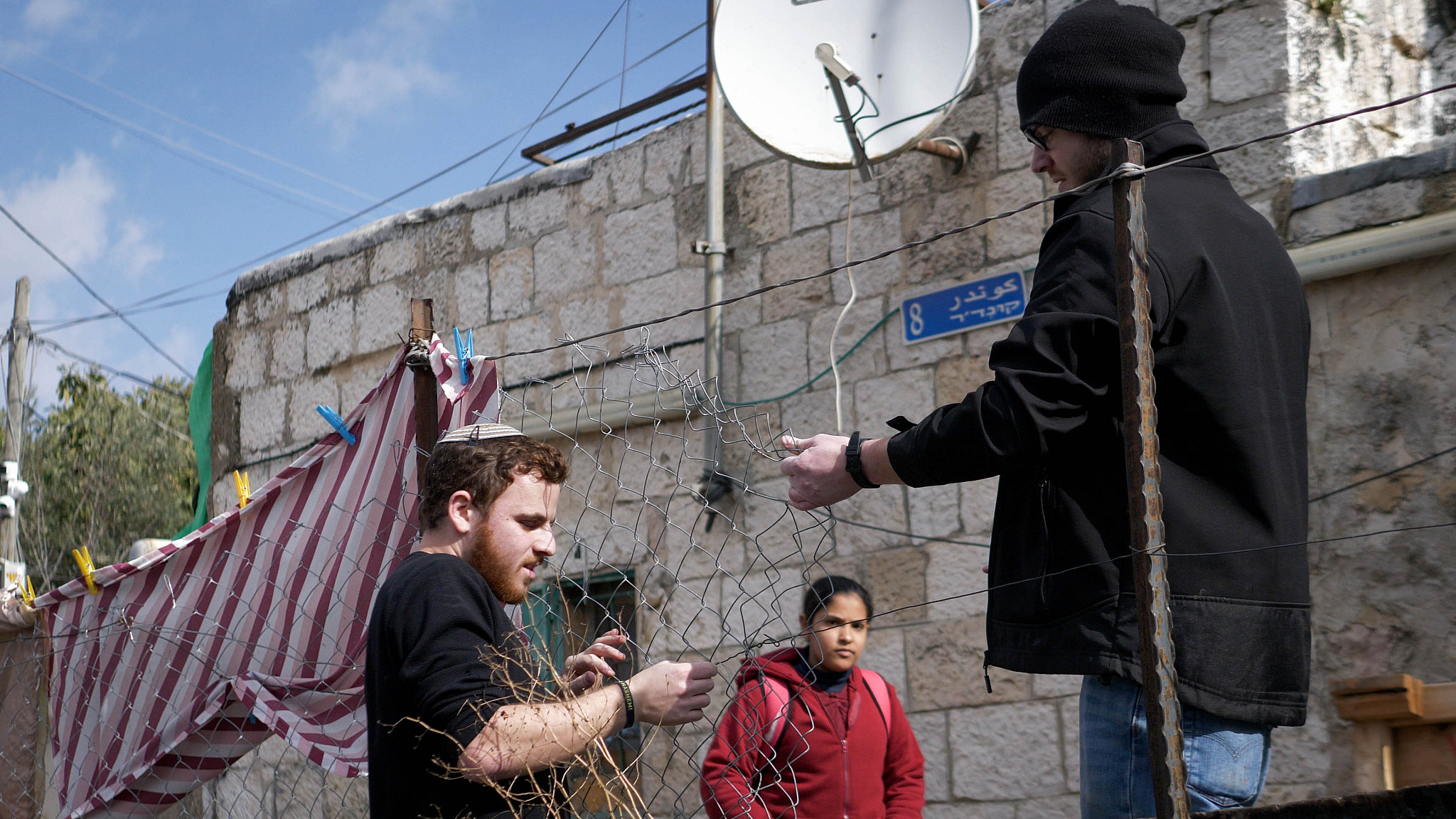 Jewish settlers set up metal fence outside the home of the Salem family in Sheikh Jarrah, Jerusalem. Dec. 16, 2021. (Rachel Shor)

Fatma the elder, who is now alone in the living room, quietly adds: “I am not sure what we’ll do if they kick us out. Our economic situation is bad.” She says she has worked as a cleaner her entire life, at a local school, at student dorms, or at the Hilton.

“I’ve been here my whole life,” Fatma said, “my husband and I have spent our lives together in this house. I remember how he used to bake cakes. And my parents grew old here, too. Now I don’t know what to do or what to think.”

Our conversation is cut off by noise coming from outside. Young, English-speaking Jews have arrived with metal fence posts. Fatma storms out to confront them: “What are you doing?” she asks, as they begin to fence in a plot of the land adjacent to Fatma’s home, which is currently used as a parking space for two residents of the neighborhood, as well as a settler who moved to Sheikh Jarrah two years ago. 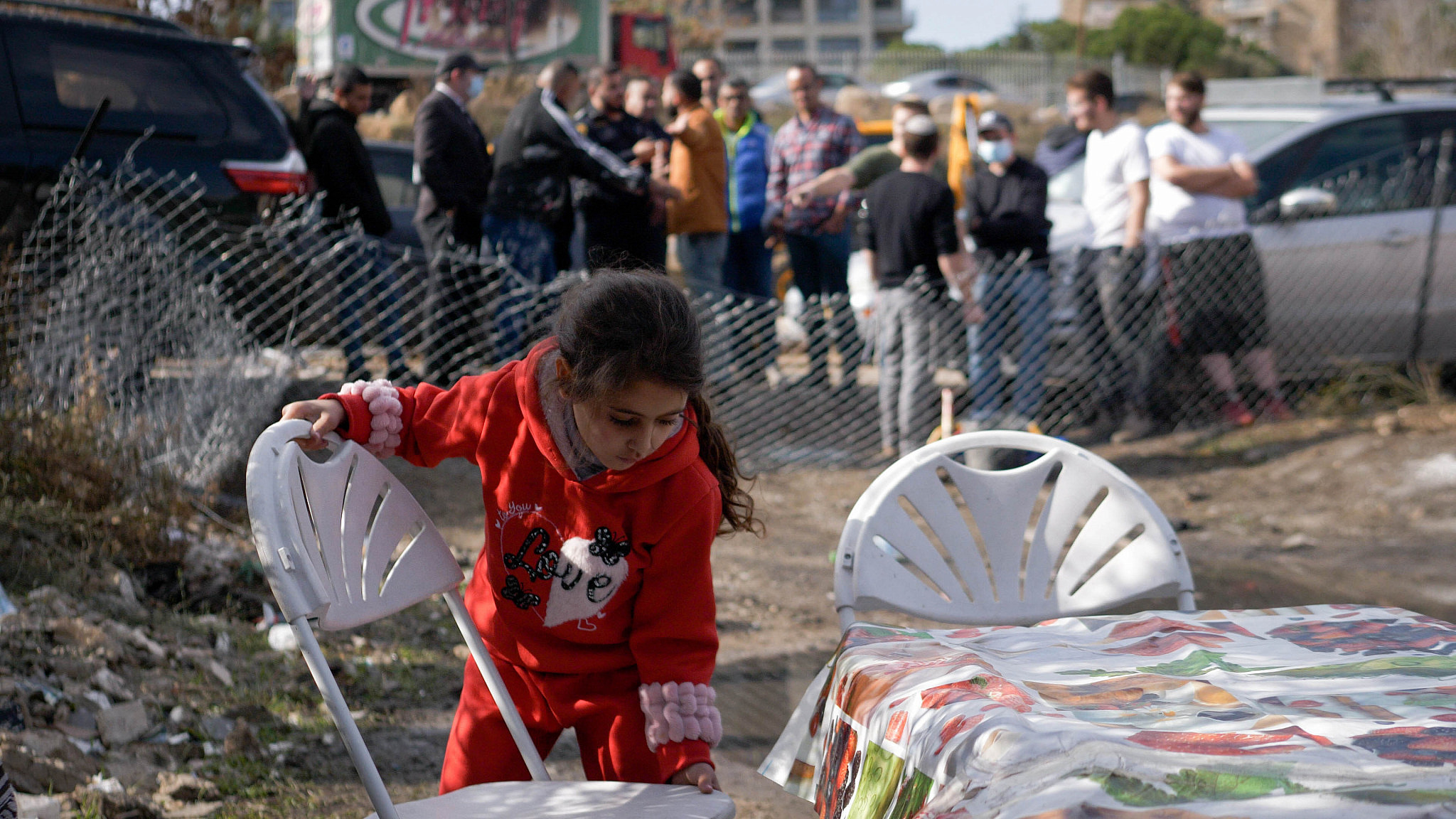 Young Fatma as altercations unfold in the background between the Salem family and Jewish settlers setting up a metal fence around her home in Sheikh Jarrah, Jerusalem, Dec. 16, 2021. (Rachel Shor)

Palestinians arrived, and a verbal altercation broke out. “How can I get into my home? Why are you doing this?” Fatma yelled at them. The man who took charge of the fencing was Haim Silberstein, one of Aryeh King’s associates, who was wearing a suit and demanded we not film him. The police arrived, and upon seeing legal papers showing the settlers had no right to build the fence, ordered the construction be stopped. “This is the beginning of our expulsion,” Fatma told me.

An hour later, King himself arrived at the home. He stood before the family and said: “Soon there will be a neighborhood for Jews here, thank God,” before reciting the names of the various Palestinian neighborhoods in Jerusalem that he has already helped Judaize.