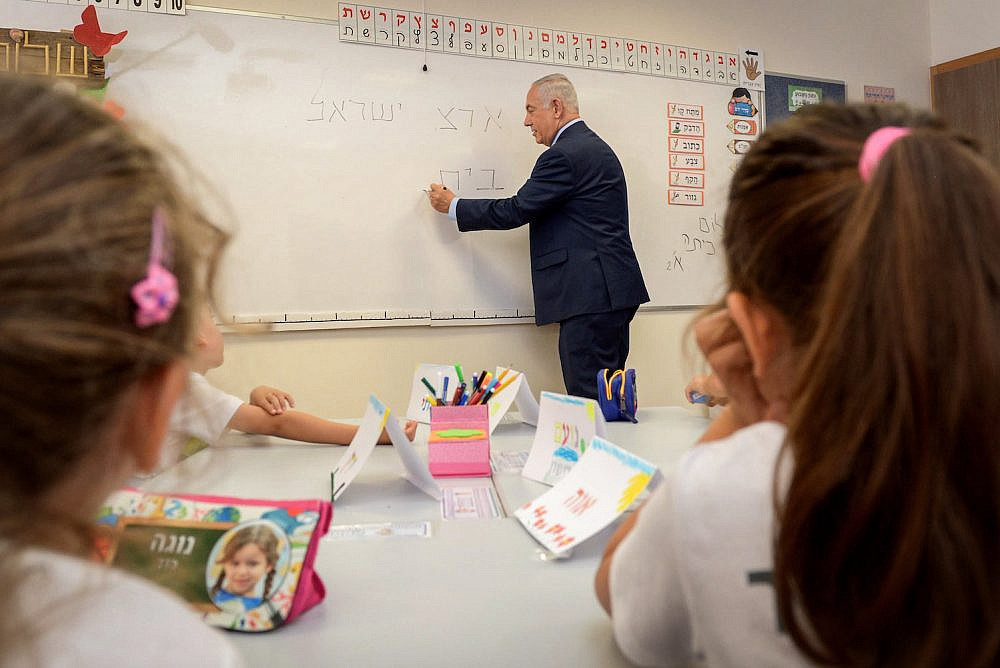 Incoming Prime Minister Benjamin Netanyahu continues to advance his mission of retconning Jewish history, one century at a time. His latest efforts were, as usual, designed to paint Palestinians, and Arabs more generally, as responsible for the worst episodes of anti-Jewish oppression over the millennia, in an attempt to reframe Israeli abuses as acts of liberation.

In two recent interviews, one in Hebrew, one in English, Netanyahu proposes his own spin on a decolonial analysis of Israel-Palestine: rather than Palestinians being the victims of Israeli domination over the last 75 years, it has actually been the Jews who were historically the victims of Arab colonization. Speaking to the right-wing Israeli publishing house Sella Meir (which published Netanyahu’s new memoir), Netanyahu stresses that Jewish indigeneity in the land of Israel is akin to that of “the Indians… the Africans before the Belgians came… the Indonesians before the Dutch came.” This, by default, negates in perpetuity any Palestinian claims to the land, which Netanyahu insists belongs to Jews and Jews alone. “We were the natives,” he says, after having to ask his interviewer the Hebrew word for “natives.”

Netanyahu goes even further in his English-language interview with Jordan Peterson, the conservative Canadian psychologist, author, and self-appointed defender of Western masculinity. Not only, Netanyahu claims, did the Arabs conquer the Jews in their own homeland, but they actually outdid the Romans and the Byzantines, who had previously ruled the Holy Land. Sure, he concedes, the preceding empires “did a lot of bad things to us,” but they “didn’t really exile us, contrary to what people think.” Instead, Netanyahu continued, it was due to the Arab conquerors that “the Jews lost their homeland.”

Indeed, “the Arabs were the colonials, the Jews were the natives,” Bibi asserts, before deploying classic colonial tropes about the “barren” and “empty” land the Jews dreamed of coming home to, and where they “built farms, factories, and places of employment” upon their return. (Well-prepped as ever, Netanyahu also gives a shout-out to Christian Zionists for helping this dream become reality; no mention, however, is made of what European Crusaders did to Jews in the Holy Land and beyond.)

So far, so bullshit. Aside from the absurdity of presenting a fictionalized history of events 1,300 years ago in order to leverage grievances and justify present-day abuses, Netanyahu is effectively downplaying the ruination the Romans visited on Judea’s Jewish population. The destruction of the Second Temple, and the widespread death, displacement, and enslavement caused by the Roman siege and razing of Jerusalem, fundamentally and irrevocably altered Jewish identity and worship. The Roman destruction is considered one of the most formative and traumatic episodes in Jewish history that continues to be mourned today, and a watershed moment in the expansion of the diaspora.

Netanyahu also omits the inconvenient fact that it was in the wake of the Arab-Muslim conquest that Jews were, after centuries of exclusion under the Romans, finally permitted to live in Jerusalem once more. Meanwhile, even the most limited engagement with Palestinian history (imagine!) is sufficient to understand that there was farming and industry aplenty in Palestine, a land that was very much not empty before Zionism.

But possibly the most dangerous comment Netanyahu makes in the Peterson interview is about how, in the context of the alleged Arab expulsion, the Jews “were flung to the far corners of the earth, suffered the most unimaginable suffering, because we had no homeland.” In other words, Netanyahu is implying that Arabs bear overall responsibility for the devastations that primarily white Christians have visited on Jews in the diaspora over the centuries. If it weren’t for the Arabs, such logic goes, the Jews would have stayed in the Middle East — meaning that the Nazis, the Cossacks, the English, French, and Spanish royalty in the Middle Ages, and others would never have had the opportunity to become antisemites and act on their violent bigotry.

This is not the first time Netanyahu has taken a revisionist hammer to Jewish history. He was excoriated and roundly mocked in 2015 for telling an audience at the World Zionist Congress that it was Hajj Amin al-Husseini, the Grand Mufti of Jerusalem, who gave Hitler the idea of exterminating the Jews in 1941. Until then, Netanyahu claimed, Hitler’s intent had only been to “expel the Jews.” Amid the widespread backlash — including from Yad Vashem, Israel’s national Holocaust museum — perhaps the most notable response came from the German government, which felt compelled to reaffirm Germany’s responsibility for the destruction of European Jewry.

All the while, the Israeli prime-minister-in-waiting has seen fit to give succor to Holocaust deniers in Europe, whether by affirming a revisionist history of Polish actions during World War II, or by praising “efforts to remember the Holocaust” by a Lithuanian government actively trying to suppress the memory of the country’s enthusiastic collaboration with the Nazis.

Whether Netanyahu actually believes his historical distortions, or those of his antisemitic allies, is almost besides the point. All of these acts of revisionism are in service of two key goals: to give his government carte blanche to oppress Palestinians however it chooses, and to ensure Israel’s right-wing, authoritarian geopolitical community remains intact.

Thus, the narrative is clear. Arabs were the original colonizers, therefore anti-Palestinian violence is part of a decolonial mission. Arabs precipitated the worst instances of anti-Jewish violence, therefore Palestinians must answer for antisemitism writ large. Arabs have never belonged to Israel-Palestine, therefore Israel’s expulsions, displacements, and incarcerations of Palestinians are part of a grand project of historical redress. And since Jews are the eternal natives, any Palestinian discourse around belonging, national identity, and oppression is evidence of an arbitrary, conspiratorial, obsessive hatred of Jews — the very kind spouted by history’s worst antisemites, some of whom Netanyahu seems so keen to absolve.

And there you have it, Netanyahu’s Christmas present to the world: an advent calendar of lachrymose Jewish historical fiction, with an Arab lurking behind every window.