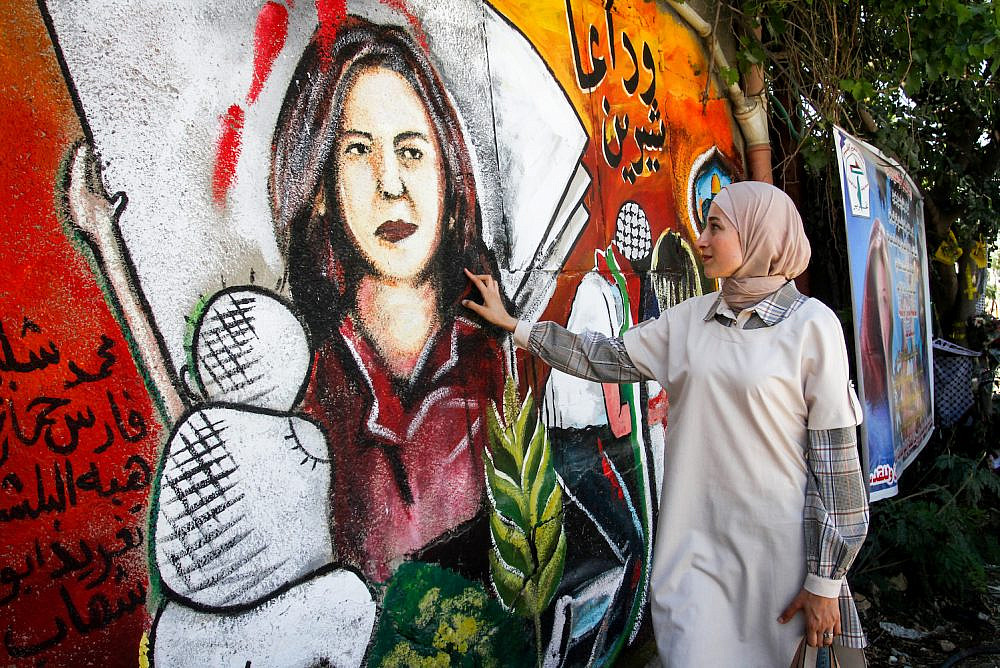 Palestinians visit the site where journalist Shireen Abu Akleh was killed, in the West Bank city of Jenin, May 18, 2022. (Nasser Ishtayeh/Flash90)

After four months of gaslighting, the Israeli army finally admitted, following an internal probe, that one of its own soldiers “most likely” killed renowned Palestinian-American journalist Shireen Abu Akleh during a raid in the West Bank city of Jenin in May. While claiming it wasn’t certain who the shooter was, the army was somehow confident enough to assert that a soldier had probably “mistakenly fired the shots while he himself was being fired at,” and that there was no need to launch a criminal investigation into the matter. Intent, in the army’s eyes, is impossible to suspect when a bullet finds its way past a helmet and press vest and into a journalist’s skull.

The conclusion of Israeli culpability is hardly news. What makes the announcement infuriating, however, is the way in which the Israeli army has casually confessed to the crime, knowing full well that the shooter will never be punished for the killing, nor will his superiors in government or the military pay a price for peddling falsehoods for months.

Much of the Israeli media, meanwhile, has simply parroted the army’s claims with little interest in interrogating the authorities further — as journalists ought to be doing — reflecting instead on how to avoid such “mishaps” and embarrassments. The impunity is so baked into the national psyche that it is taken almost as an article of faith, if not an implicit right, which nearly every Jewish-Israeli individual and institution can feel entitled to.

Yet amid this reality of indifference lies an empowering lesson. Despite Israel’s diversions, Palestinians and their allies demonstrated that they have the power to force Israel into a corner. Palestinian journalists and eyewitnesses, amplified by multiple investigations by some of the world’s most prominent media outlets, have shown for months that the shooter could not have been anything other than an Israeli sniper targeting Abu Akleh. The body of evidence was so overwhelming that even the army’s probe, for all its calculated ambiguity, had little wiggle room to suggest otherwise.

The public activism that followed Abu Akleh’s killing not only made “Shireen” a household name beyond the Arab world, but ensured her name was echoed in parliaments and government offices across the globe. Elevated by this mass support, Abu Akleh’s family, including her devoted niece Lina, have taken their cause to the U.S. Congress and State Secretary Antony Blinken, putting direct pressure on Washington to hold its military funding beneficiary to account, let alone fulfill its duty to an American citizen killed by foreign forces.

This grassroots power and mobilization should not be overlooked or taken for granted. But it does also highlight the ongoing gap between the growing Palestine movement that is shifting public opinion against Israeli apartheid, and the policymakers that have the political and economic leverage to impose serious consequences on Israel’s actions. It is unsurprising, yet no less appalling, to witness how Washington has “welcomed” Israel’s findings and simply asked it to review its open-fire regulations — as if the problem was a misreading of a rulebook, not a system in which violence is itself the rule.

The fight to achieve justice for Shireen is not over, and serious questions need to be asked about how that justice can be brought about from the ground when the leaders above are refusing to do so. There is little doubt, however, that her memory will remain a powerful rallying cry for Palestinians in their struggle, and will awaken more people to the brutality and deceptions that keep Israeli apartheid standing.