Thousands of Palestinians, many of them residents of the occupied West Bank, celebrated the Muslim Eid al-Adha holiday at the beach in Jaffa over the weekend, after receiving permits from the army to cross into Israel.

In the run-up to the holiday, one of the most important in Islam, the Civil Administration, which manages the day-to-day lives of Palestinians living in the West Bank, announced it would “ease restrictions” and would provide a limited number of entry permits. On virtually every other day of the year, Palestinians who do not hold work permits are banned from reaching the sea, let alone crossing into Israel.

In previous years, dozens of Palestinian families were able to reach the sea during the holiday by crossing through breaches in the separation barrier while the Israeli army turned a blind eye. Over the last months, however, Israel methodically sealed those breaches and stationed soldiers in their vicinity following a string of deadly attacks by Palestinians in Israeli cities. 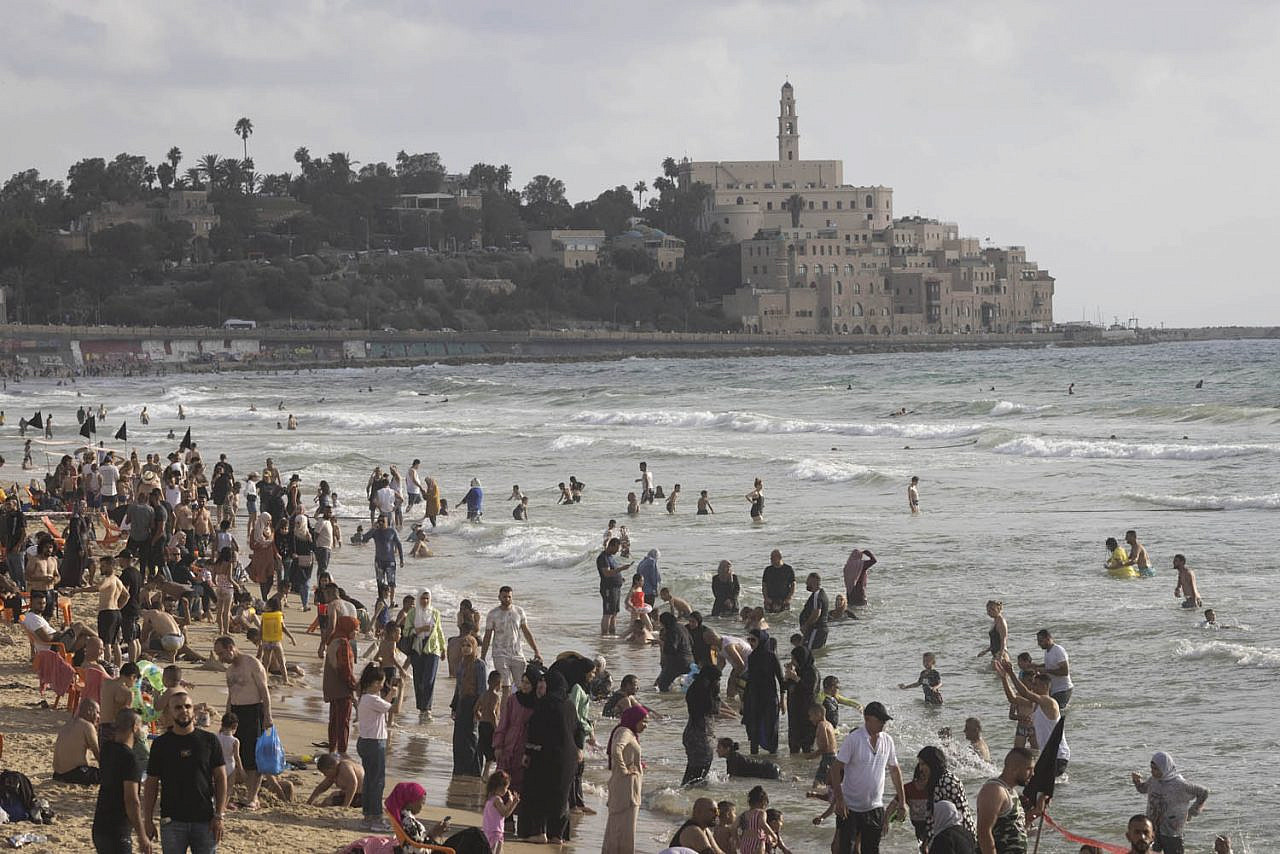 Thousands of Palestinians from the West Bank enjoy the beach in Jaffa during the Eid al-Adha holiday, July 11, 2022. (Oren Ziv)

“Fewer people come because the fence is sealed,” said a man in his forties from the village of Beit Liqya, near Ramallah, who came to the sea with his friends. “[They are] suffocating people and not letting us out. Life in the West Bank is like in prison. People have to breathe, to hang out. There are children who have never seen the sea.” 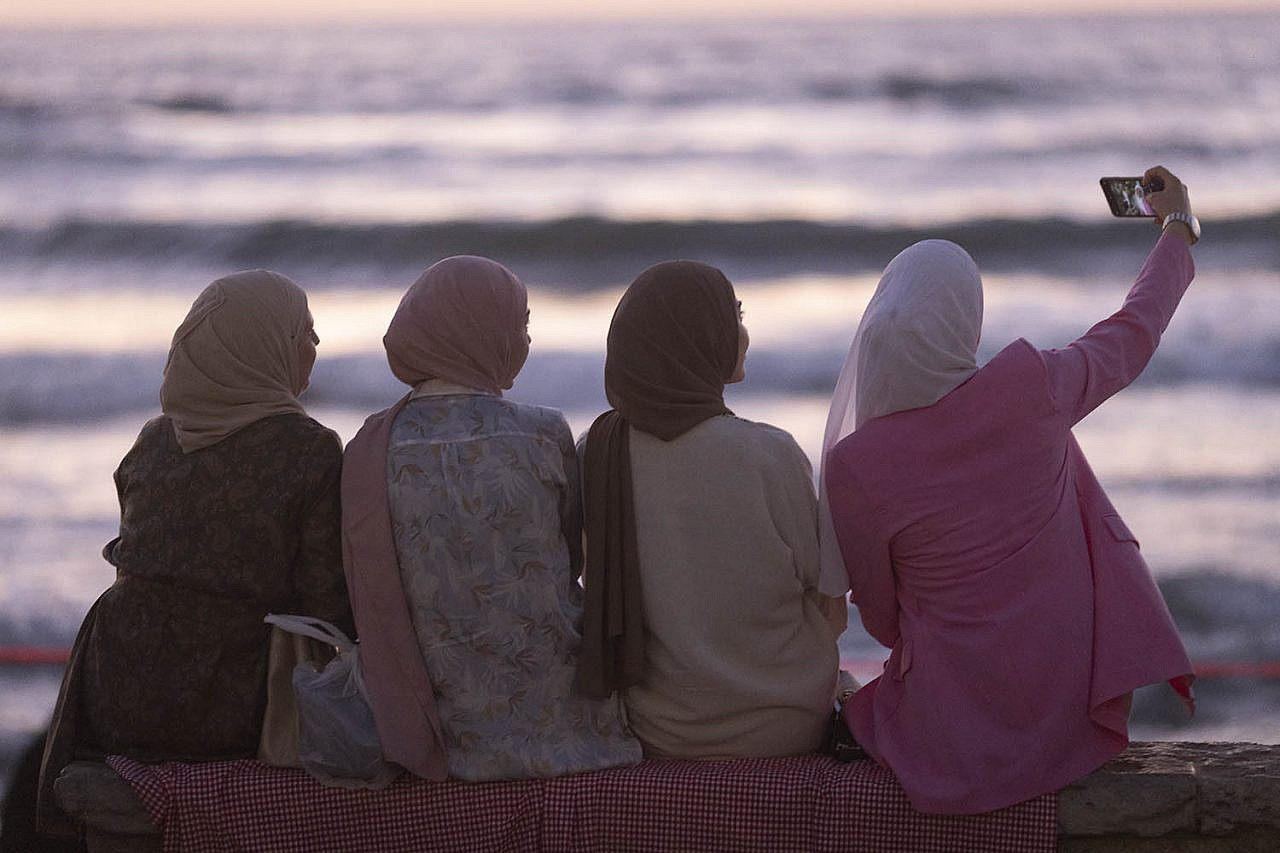 Shadi, who lives near the West Bank city of Qalqilya area and works in Israel, said that the number of people who crossed over this year has decreased significantly. “Issuing permits takes time… this is done through the Palestinian Authority [which coordinates with Israel], as well as tourism companies that charge large sums for the trip.” 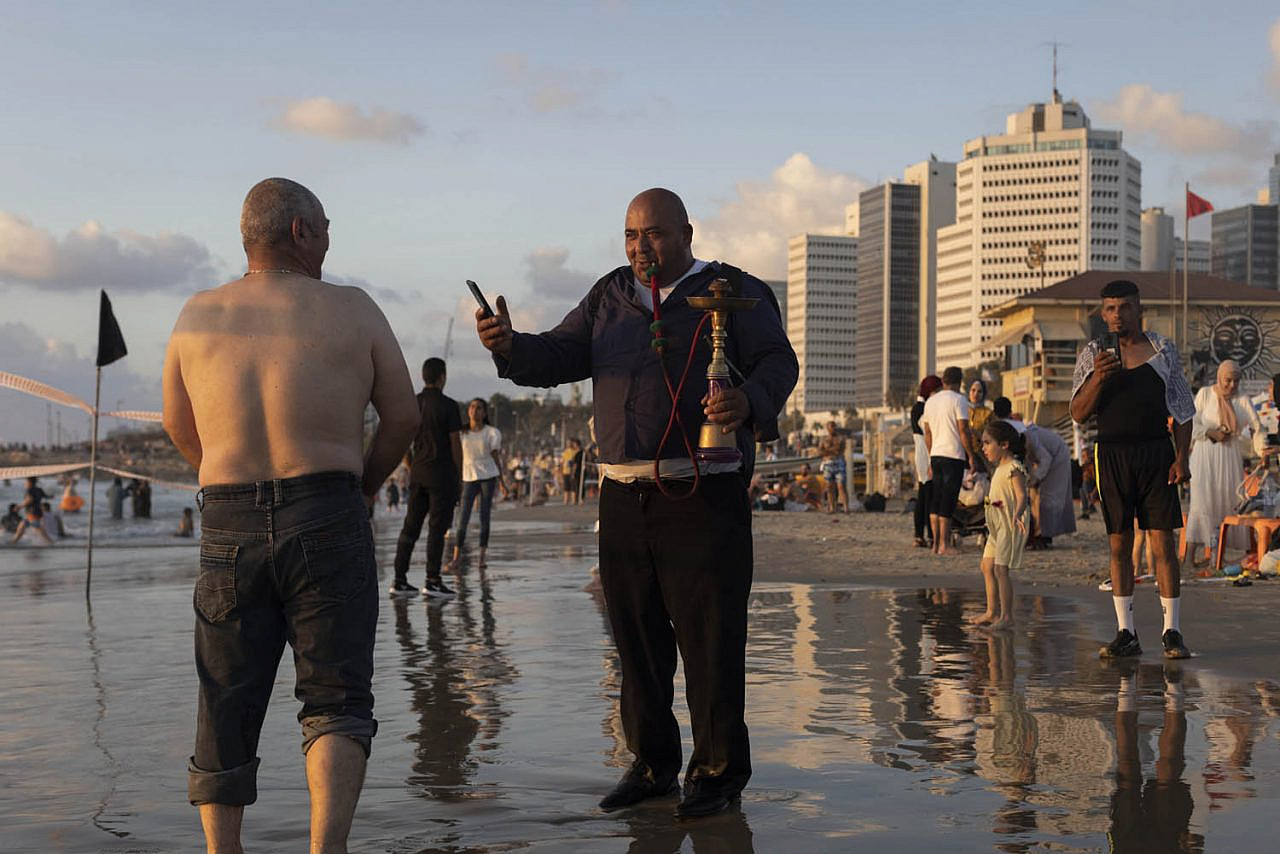 Palestinians from the West Bank enjoy the beach in Jaffa during the Eid al-Adha holiday, July 11, 2022. (Oren Ziv)

It was not difficult to identify the Palestinians who had never seen the sea before. They stayed up late or used video calls to show the sunset to family members who could not join them. “Seeing the sea is crazy, especially in Jaffa,” said Karem, a 20 year old from the Qalqilya area. “I received a special permit for the holiday to enter. I wish I could come here all year round.” 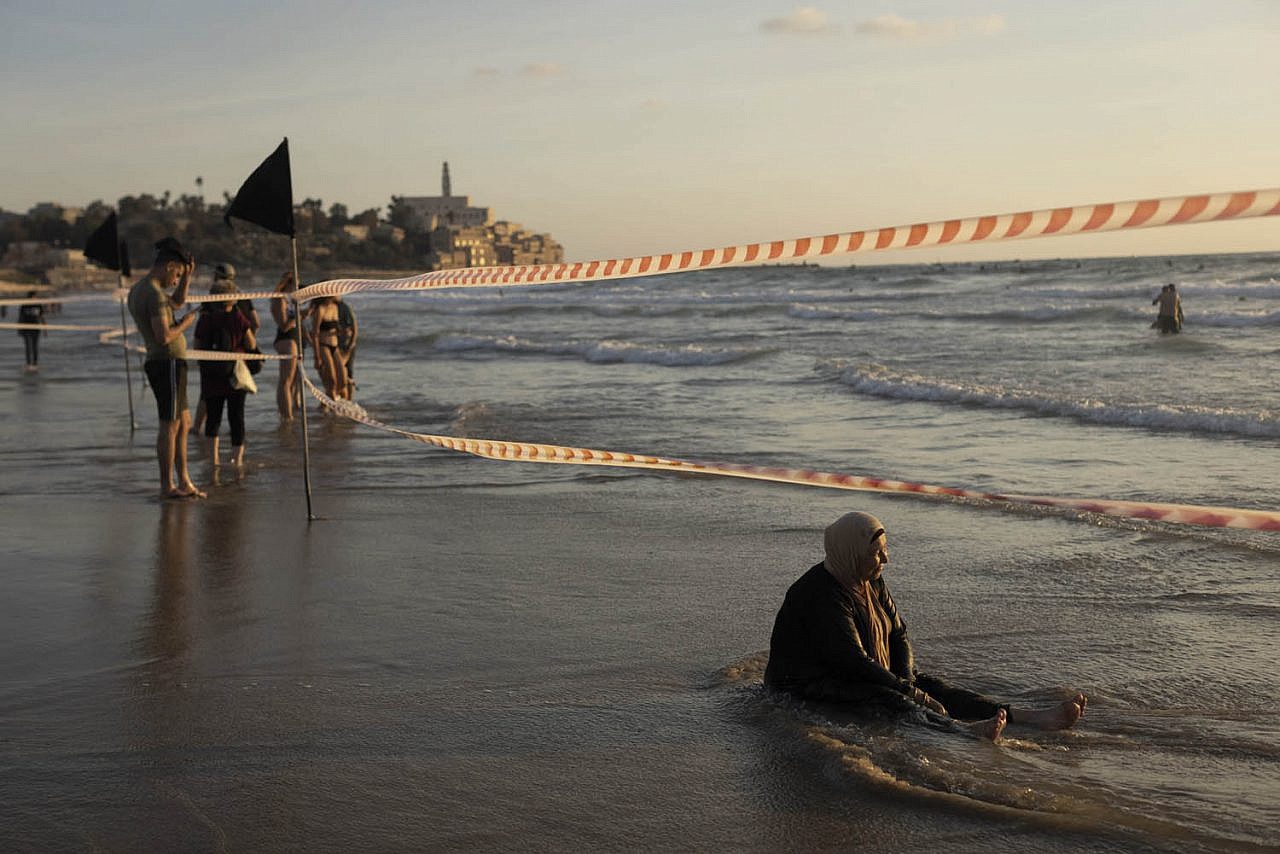 Palestinians from the West Bank enjoy the beach in Jaffa during the Eid al-Adha holiday, July 11, 2022. (Oren Ziv)

Saleh, 53, from Nablus, said he had not been to the sea since 1999. “I was working in Israel. I finished one job, but my manager did not want to pay what he owed me, so he then got me placed on Israel’s no-entry list, even though I have never been in prison or had problems in my life. Since then, my name has been on the list, and only a few months ago a lawyer was able to annul this.” 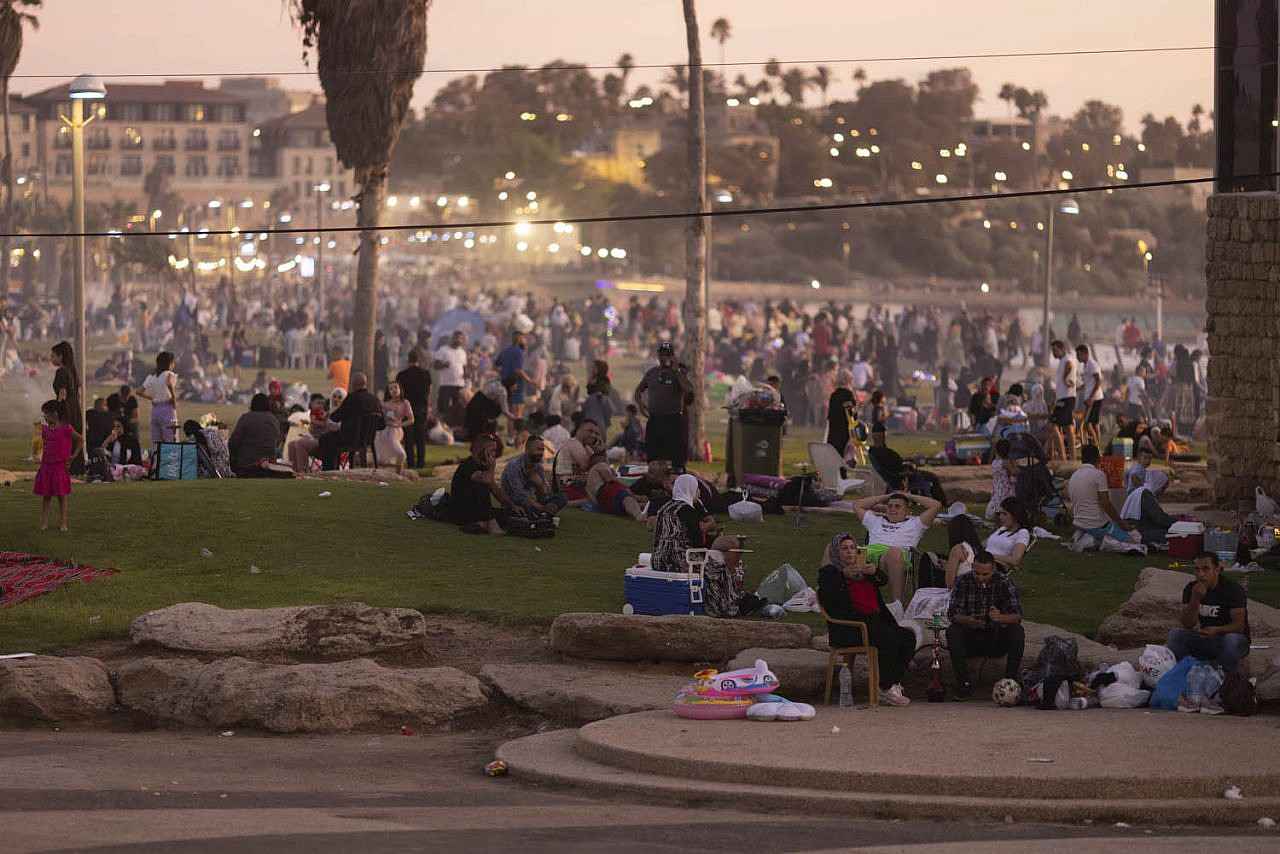 Thousands of Palestinians from the West Bank celebrate Eid al-Adha at the park next to Jaffa beach, July 11, 2022. (Oren Ziv)

Saleh’s friend, Sabri, who is also from Nablus, said that many could not cross over because of the economic situation in the West Bank, which hinders people’s ability to travel and shop in Israel. Others, he said, preferred to travel abroad. “Half of the West Bank is in Turkey, but I prefer the sea here. For Israel, letting people in is also an economic matter; people who come from the West Bank will spend the money here.”

I have been covering Israel’s policies toward Palestinians during Muslim holidays for nearly a decade, and every year, this momentary situation — in which Palestinians from the West Bank are able to enter Israel for a limited number of days — shows us just how arbitrary Israel’s segregation regime is, while providing us with a real-life visual for a different future. It is, more than anything, proof that we can live in a country where the beach is accessible to all, regardless of nationality or religious affiliation. A country where whole groups of people, even on ordinary days, are not deemed a “security threat.”