Israel shut down a Palestinian puppet theater festival last month, but ‘cultural and artistic organizations are those parts of the iceberg of Palestinian resistance that remain underwater. If discovered by the State, they vanish and appear elsewhere, in different form, like a phoenix, striving for a freedom that is prefiguratively victorious by its nature.’ 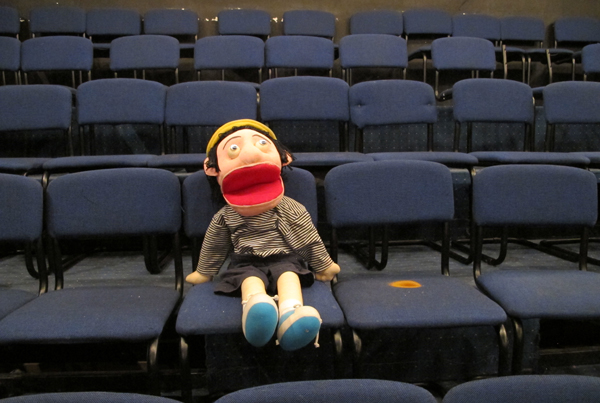 A puppet fills one seat in the empty El-Hakawati Theater on June 27, 2013 in East Jerusalem. The theater would have been filled with children and families, but the Israeli Public Security Ministry canceled the annual festival. (photo: Matt Surrusco, +972 Magazine)

Puppets, clowns, and general carnivalesque frivolity pose a threat to state authority. Writing on the frivolous mass mobilizations of the “globalization movement,” the anarchist anthropologist David Graeber states in his article On the Pnomenology of Giant Puppets, “Often police strategies aim to destroy or capture [puppets] before they can even appear on the streets.” It is this general aversion to lively art, as well as the usual mechanisms of apartheid and racism, that brought about the closure of the el-Hakawati children festival.

El-Hakawati (الحكواتي) means “the storyteller” in Arabic. The word inspires an image of a wandering sage that captivates children and adults alike in smoky coffee places of the Levant. Igniting the imagination, the storyteller creates insurgent moments that last in people’s minds. Intifada (إنتفاضة) means “uprising” or “insurrection.” If you ask a random Israeli about it, you will probably hear about suicide bombers, Molotov cocktails, and stone-throwing. But that is only the visible bit of the iceberg of Palestinian insurrection.

In an essay from Eyeless in Gaza, published in a major Israeli newspaper at 1988, the author Shulamith Hareven wrote about the decentralized nature of the First Intifada. She witnessed secret, forbidden geography classes in private houses held in defiance of Israel’s order to close Palestinian schools. She wrote about a women’s collective that stopped listening to the mukhtar (the head of the village, often in compliance with past and future state authorities) and formed a popular committee. The popular committees that started appearing spontaneously went into houses, supplied food and care work and participated in forming the backbone of Palestinian civil society (which later brought about the BDS call of 2005). “The violent part, the one directed visibly against the occupation, with bottle and stone, is a very small part of the happenings,” she wrote. “But this deep change is possibly the most important occurrence of the Arabs of the Occupied Territories.” (Hareven, Yediot Aharonot, October 14, 1988, my translation) Established in 1984, el-Hakawati Theater was part of a multi-layered culture of resistance to the occupation that sprang and flourished in following years, in civil society, but also in art, film, and theater – the elements of intifada that are less likely to be acknowledged, that complement other elements of insurgency.

We can juxtapose stone-throwing – a much more widespread, decentralized, and, most importantly, still-present display of active resistance than suicide bombing – with puppets and clowning, and see them as complementary. Graeber’s account of window-smashing as complementary to giant puppets in the globalization movement is analogous: “If one is meant to shatter the existing spectacle, the other is, it seems to me, to suggest the permanent capacity to create new ones.”

The complementary, rather than oppositional nature of these different aspects of struggle was well articulated by Juliano Mer Khamis, founder of the Freedom Theater in Jenin, who was in many ways a living example of the insurgent potential of coexistence (indeed, of ta’ayush):

You don’t have to heal the children in Jenin. We are not trying to heal their violence. We try to challenge it into more productive ways. And more productive ways are not an alternative to resistance. What we are doing in the theater is not trying to be a replacement or an alternative to the resistance of the Palestinians in the struggle for liberation, just the opposite. . . . We are joining, by all means, the struggle for liberation of the Palestinian people, which is our liberation struggle. . . . We’re not healers. We’re not good Christians. We are freedom fighters.

One of the performances planned for el-Hakawati’s banned theater festival is a puppetry adaptation of “Alice in Wonderland” (also performed by the Freedom Theater and directed by Mer Khamis), a piece that manifests on stage the possibilities of imagination, led by a female figure of self-determination. Another banned performance portrays a hunt for a monster that supposedly terrorizes citizens but ends up being a harmless oversized creature running away from a ruthlessly ambitious police chief. Of the tragically rich program for the lost festival, these are examples that may be easily interpreted as relevant to our political context, but any form of art that ignites the imagination and creates a longing for “the endless immensity of the sea” (Antoine de Saint-Exupery) is insurgent, I believe.

El-Hakawati, the folk figure of the storyteller, creates moments of utopia in which the audience drowns in the story. He sows seeds of insurgency with small gems of imagination. An image of little Alice standing up against the absolutist reign of the queen. Anarchist theorist Hakim Bey coined the term “temporary autonomous zone” (TAZ) as a lucid framework for these moments of independence, both physical and imaginary: “The TAZ is like an uprising which does not engage directly with the State, a guerilla operation which liberates an area (of land, of time, of imagination) and then dissolves itself to re-form elsewhere/elsewhen, before the State can crush it.”

The spontaneous organizations that imperceptibly offered daycare, schools, and other spaces of freedom of thought shown by Hareven, as well as cultural and artistic organizations, are those parts of the iceberg of Palestinian resistance that remain underwater. If discovered by the State, they vanish and appear elsewhere, in different form, like a phoenix, striving for a freedom that is prefiguratively victorious by its nature.

The latest closure of el-Hakawati Theater is certainly not the worst Israeli assault on Palestinian culture. After the murder of Juliano Mer-Khamis by a masked gunman in 2011, to take a stark example, Israeli authorities arrested his friends and members of the company. Israeli soldiers had previously hurled blocks of stone to break their way into the auditorium in Jenin and arrest artists.

Palestinian insurgents are not alone in this struggle against state assault on creative resistance. To return to Graeber’s take on the globalization movement, in 2003 the Miami City Council “actually attempted to pass a law making the display of puppets illegal, on the grounds that they could be used to conceal bombs or other weapons.” (Graeber 17) This case of state repression around the FTAA Summit (a monstrous “free trade” agreement that resistance managed to defeat) exemplifies state reaction to visible and direct displays of carnivalesque resistance.

We’ve seen the power of clowning and puppets in protests here as well. As I experienced myself when I was saved from being arrested at el-Ma’asara, clowns diffuse military brutality. Clowns, puppets and carnival render state authority ridiculous, and obsolete. As David Shulman states in his beautiful account of the stunning protest in Susiya a year ago: “Nothing is ever so true as the truth revealed by a clown.”

There has already been quite an outcry against the Israeli Public Sercurity Ministry’s decision to ban the festival. With determination, the Festiclown Festival will happen in el-Hakawati next September. The stories of repression of art reveal the potential and actual successes encompassed within the practice of frivolity. Anti-occupation folks should pay attention to this potential. Art matters.

Before we part, here’s what I mean by determination: watch this video showing puppets and clowns, samba rhythms and spoken word poets swarming a children’s theater festival for Jews only in West Jerusalem.

Amitai Ben-Abba is an Israeli anarchist from Jerusalem. He takes part in demonstrations and direct actions across Occupied Palestine and writes about his experiences in his blog.