Netanyahu talks about Iran every single day. Today was the one day he shouldn’t have. 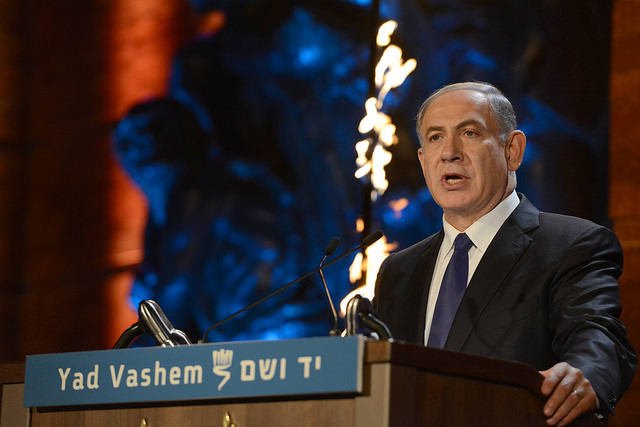 Today is Holocaust Remembrance Day in Israel. But if someone had landed here from another planet, they wouldn’t necessarily catch on. They might find it hard to  commemorate the Jewish lives taken in Europe during World War II, and instead be preoccupied with Iran’s nuclear program.

On Thursday night, as businesses closed throughout the country, Prime Minister Netanyahu spoke at Yad Vashem, Israel’s Holocaust museum. Standing on the podium, among the few survivors that are still alive, he took the opportunity to talk about Iran, and why the deal being formulated with world powers to curb its nuclear program is a bad one:

“Just as the Nazis aspired to crush civilization and to establish a ‘master race’ to replace it in controlling the world while annihilating the Jewish people, so too does Iran strive to gain control over the region, from which it would spread further, with the explicit intent of obliterating the Jewish state.”

Never mind that this is an inaccurate and unconvincing comparison. Never mind that everyone on this planet already knows Netanyahu’s position on Iran and the agreement regarding its nuclear program. Never mind that Iran’s support for terrorist groups is bad enough without the need to compare it to Nazism. Netanyahu’s politicization of the Holocaust in an insult to all its victims and those affected by it. As if the genocide of Jews wasn’t a singular and horrible enough historical event that deserves its own place.

At the same event, President Rivlin subtly but explicitly countered Netanyahu’s fear mongering approach, trying to dissociate the Holocaust from the State of Israel and any of the state’s current politics.

Of all days, today should have been the one day in the entire year that Netanyahu took a break from his crusade against the Iran deal, and allowed the Holocaust its rightful place in the state’s collective memory.

As my colleague Orly Noy joked on her Facebook page, “Netanyahu managed to introduce a new holiday into the Israeli calendar: Memorial Day for Iran and Fallen Heroes.”

Related:
We can no longer deny the Holocaust of Libya’s Jews
Holocaust Remembrance Day in Israel: Something’s missing
How Israel can stop a nuclear arms race in the Middle East