The consequences of the the Israeli government decision go beyond the action against the Palestinian community in Bab Al-Shams. By evicting the residents, Netanyahu has made a mockery of the Israeli High Court and, in turn, the rule of law. 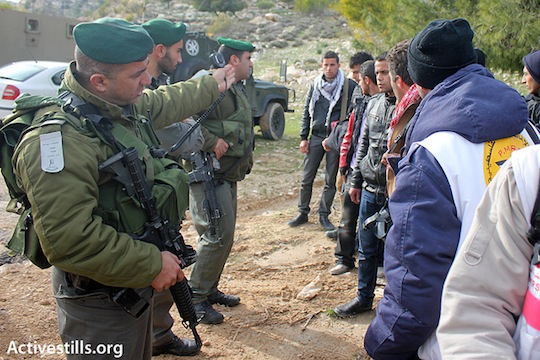 In the early hours of Sunday morning, hundreds of Israeli soldiers stormed the newly-founded Bab Al-Shams village, evicting Palestinian and international activists. The eviction took place despite an injunction by the High Court of Justice. However, Palestinians at the site were notified ahead of time that they will be removed regardless of the decision.

The Bab Al-Shams village was created only three days ago by over 250 Palestinians and internationals as a nonviolent response to Israel’s recent decision to build settlement units in the E1 area. According to Irene Nasser, an activist who was present at the scene last night, activists at Bab Al-Shams were arrested and  later released at the Qalandiya checkpoint near Ramallah. Six Palestinians were injured during the eviction and taken to hospitals in Ramallah and Jerusalem.

The Israeli government’s decision to ignore the High Court injunction and evict the Palestinians from E1 was justified by urgent security needs. However, there was no further explanation regarding said security threat. (In Israel, the term “security threat” can often be used as a license for any oppressive actions toward the Palestinian people.) It is probably that Prime Minister Netanyahu, who ordered the eviction, made the hasty decision due to considerations having to do with the upcoming elections, rather than with security. However, the consequences of the the Israeli government decision go beyond the action against the Palestinian community in Bab Al-Shams. Netanyahu has made a mockery of the Israeli High Court and, in turn, the rule of law.

According to Haaretz, the village was built  mostly on private Palestinian land, rather than “state land.” Therefore, the government’s decision lacks any legal standing, since the Palestinians were not given a chance to defend their case in court.

Palestinians learned today that even if the High Court rules in their favor, the Israeli government is entitled to ignore the court. If the current Israeli government can ignore the court’s decisions with no consequences, then perhaps Israel should reconsider calling itself a democracy. And at the very least, Netanyahu’s disregard for the High Court should alarm Israelis.

Israel considers over 100 of the current settlements illegal. Yet, the government turns a blind eye to these settlements, often built on private Palestinian land. Despite their illegal status, these settlements are protected by the IDF, and receive residential services and infrastructural support. Furthermore, Israel has built over 120 “legal” settlements in the West Bank while preventing Palestinians from establishing new towns or villages in Area C, which constitutes more than 60 percent of the West Bank.

The story of the Migron outpost is easily best example of the Israeli government’s double standard vis-a-vis the settlements; despite building on private Palestinian land, and a High Court decision to evict the outpost, the Israeli government ignored the eviction order. The government then became the advocate of Migron’s settlers and requested more time in order to find a “solution” that would suit the settlers. Eventually, the government agreed to move Migron to a new location.

The policy is clear: Palestinians are forbidden from building on their own land, while settlers will be given complete support for building regardless of the legality or consequences.

And although the government was successful in evicting Bab Al-Shams, it could do very little to destroy the inspiration that Bab Al-Shams has given to Palestinians. The effort to challenge the occupation through nonviolence could be a game changer in the Palestinian struggle.