The indictment, which was approved by Israel’s attorney general, was the result of a years-long petition demanding the state take action. Israel’s quasi-constitution has no explicit protection of free speech. 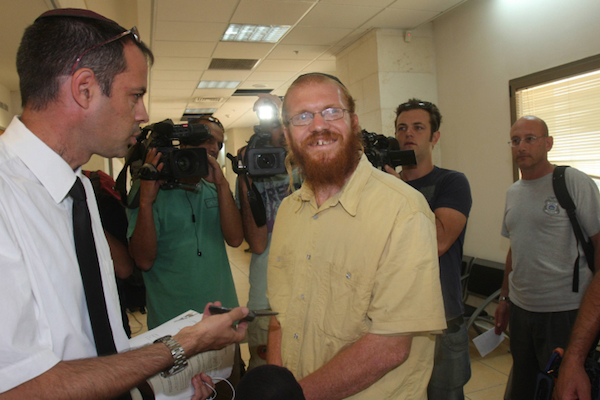 Rabbi Yosef Elitzur speaks with his lawyer in cour in 2010. (Roni Schutzer/Flash90)

A extremist Israeli settler rabbi who has published articles and books on the permissibility of killing non-Jews was indicted for incitement to violence on Tuesday, years after penning his most notorious work, “Torat Halmelech.”

The indictment of Rabbi Yosef Elitzur was the result of a petition filed two years ago by the Israel Religious Action Center (IRAC), and Tag Meir, demanding that the state take criminal action against him.

“It is high time Israel cease to tolerate the intolerable,” Anat Hoffman, executive director of IRAC, said of the indictment. “A rabbi like him contaminates our Jewish tradition and pollutes our democracy. Freedom of speech ends when hate and violence are preached and practiced.”

Incitement charges are most common against Palestinians in Israel, with authorities rarely holding Jewish citizens to the same standards of criminal liability. Freedom of speech is not explicitly guaranteed under Israeli law, and authorities and legislators place many limits on protected speech in the country.

In recent years, hundreds of Palestinians have been put on trial in civilian and military courts for statuses posted on Facebook that Israeli authorities deem inciting.

One of the most famous cases was the trial of Palestinian poet Dareen Tatour, who was charged criminally for a poem she wrote and posted online. Earlier this week, a Jewish Israeli activist lawyer was criminally convicted for a song he wrote about a police officer.