But we don’t live in that world, as I was forcefully reminded a few nights ago, driving through the winding mountain roads of the occupied West Bank. These Palestinian cities and towns are separated not primarily by distance, but through an ever-growing infrastructure of Israeli settlements which is shrinking the area where Palestinians are permitted to live, work, play, and travel safely.

There are now at least 650,000 settlers living throughout the occupied Palestinian territories, and new settlements are being approved regularly. One increasingly cannot drive between places in the West Bank that are just a few minutes apart without passing a settlement or an entrance to a settlement, all of which are illegal according to international law. And with the unceasing growth of the settler population has come unrelenting settler violence — with which I came face to face last week.

Originally from Nablus, I moved to the United States as a young child, spending summers in Palestine to visit family, except for a few years during the Second Intifada. So I was thrilled when I won a research grant to study movement restrictions as they affect health in Palestine, for which I would be based back in Nablus. I made arrangements to bring my children and husband with me. This was to be a special family time, in my homeland.

Aside from visiting family and conducting my research, I planned a few excursions, including one to Ramallah. Perhaps my first hint of what was to come was a text from a friend and colleague from Haifa whom I had planned to meet there, asking to reschedule: “We’ve heard from a friend that his friend’s car was attacked by settlers, throwing stones, yesterday next to Ramallah.” He thought there might be an issue coming from his direction. Of course, I had heard of settler attacks and even seen the videos. I’d read countless reports on the rise of settler violence, and the impunity afforded to settlers. We made plans to meet the following week instead, perhaps in Jericho. In a normal world, this would have happened without any issue.

Chartering a taxi from a well known company in Nablus, my family and I made the hour-long ride to the Ramallah area ourselves, unaware that just outside of Nablus, an Israeli soldier had been shot, and Nablus would soon be besieged.

We first visited the Palestinian Museum in Birzeit, viewing the moving exhibit “A People by the Sea,” which examines how the coastal cities of Palestine were affected by the Nakba and the events that happened thereafter. We moved on to the Yasser Arafat Museum, a shrine not just to the former leader but to a near-century of trauma, displacement, and violence experienced by Palestinians. My children viewed the photos and videos solemnly. If only I had known that we would soon get an in-person experience of the most alarming recent trend in Israel’s violence against Palestinians.

The trip home back to Nablus started uneventfully. It had been a long day, and my kids quickly fell asleep in the backseat. There was little traffic, and we anticipated being home within the hour. But as we approached the Za’tara area a few kilometers south of the city, we saw the first signs of trouble.

Ahead, we spotted a large group of settlers, most of them young men, waving large Israeli flags in the median near an intersection, and a few Israeli military jeeps and a Border Police van parked to the right, its lights flashing. The traffic light was red. Our taxi driver stopped a few hundred meters short of the light, waiting for it to turn green so as to avoid pulling up right next to the settlers and soldiers. “It’s okay,” he reassured us. That’s when I noticed the large stones littering the road, and the settlers apparently noticed us. Settlers wave Israeli flags during a protest at the entrance to the settlement of Kiryat Arab, near Hebron, occupied West Bank, January 17, 2015. (Yonatan Sindel/Flash90)

They started screaming and running toward the taxi. I began to tense up. Many had their arms pulled back, loaded with stones. Our taxi driver threw the car into reverse. My husband turned around in his seat and silently gestured toward the kids, a fearful look on his face. I thought that surely the settlers would notice the sleeping children in the backseat and retreat.

They didn’t. They approached, screaming at us, just a few meters from the window. We ducked down as low as we could, my arms covering my kids’ heads. I had heard the stories. I knew people died this way. Could this really be happening?

They started to throw stones. One of the soldiers waved on for our driver to go through the red light. He hit the pedal and we sped past the angry mob, their faces twisted with anger as they chased us through, our taxi bumping around on the stone-filled road.

I finally exhaled. It lasted maybe two minutes, but it was the first time I ever felt scared being in the West Bank — made even more terrifying by the sense of duty I felt to protect my kids and how powerless I was to do so in this situation.

I called my family in Nablus to tell them what had happened. They had heard that the roads to Nablus were full of settler mobs, some armed, some starting fires, and there were rumors that all the entrances to Nablus were closed. We drove by a few more groups of settlers who were crowding intersections and roundabouts, waving flags, screaming, and some appearing to be singing joyfully. Each time I saw them, I was thankful beyond belief that my kids were asleep and couldn’t see what was happening. I saw men and women, young and old. I looked at some of the women, many seemingly my own age and older, maybe some of them mothers. How did they justify terrorizing another family, as they beamed, waving their country’s flag?

We approached the entrance to Huwara, a town outside Nablus that has become a flashpoint for settler violence over the last year, and just minutes away from where we were staying. But it quickly became apparent that we wouldn’t be entering this way.

There was an enormous military presence, and a flying checkpoint had been erected in the hours since we left the city. To the right was a soldier in a watchtower, sweeping the area with a mounted gun pointing a green laser that passed over our car multiple times. We waited in line, afraid to make a single false move, while yellow-plated Israeli cars filled with settlers overtook us. The settlers confidently stepped out of their cars, spoke to the soldiers, and passed through.

When we reached the checkpoint, our taxi driver explained that we were Americans, and that he was just trying to get us to our apartment a few kilometers ahead. “Closed. Closed. Don’t make trouble,” the soldier told us in English. My husband, the barrel of the soldier’s gun essentially in his face, told the driver to just turn around. My smart watch warned me that my heart rate was abnormally high. “Yeah,” I told myself, “I know.”

By this point, members of my family were calling every few minutes. Where are we? What happened? Meanwhile, our driver was fielding calls from the taxi office; other drivers were calling in to share that there were checkpoints and settler mobs everywhere. How would we get into Nablus? Our driver, who seemed to have experience at dealing with situations like this, quickly turned off the main road to avoid running into more settlers, and entered Odala, a nearby Palestinian town. We drove through the streets, where locals were aware of what was happening just a few minutes away. Then, another Palestinian taxi approached from the opposite direction, its windshield smashed. The driver explained that the road ahead was blocked — we would have to find another way.

Panic started to set in; I had the sinking feeling that we would not enter Nablus that night. I worried about exposing my kids to this traumatic situation, and thought about all the other Palestinian families who were exposed to these stressors on a daily basis.

Our previously unflappable driver pulled over to have a cigarette and think about what to do. He told me, “This is why my wife has a picture of me by the bed,” indicating that it was not the first time he would return home much later than planned — or was perhaps worried he would not return home at all.

My phone was ringing non-stop. Did you try this route? We heard it was closed. Where are you? My aunt suggested we stay the night at the home of a friend of hers to avoid driving during what was clearly an extremely violent night on the roads.

The driver got back in the vehicle. He knew another path. It wouldn’t be fun, he said, and it would take a while. My children were stirring, asking what was taking so long. I told the driver, “As long as you do not get back on that main road, try it.” He assured me we would stay in the Palestinian towns where it was safe. 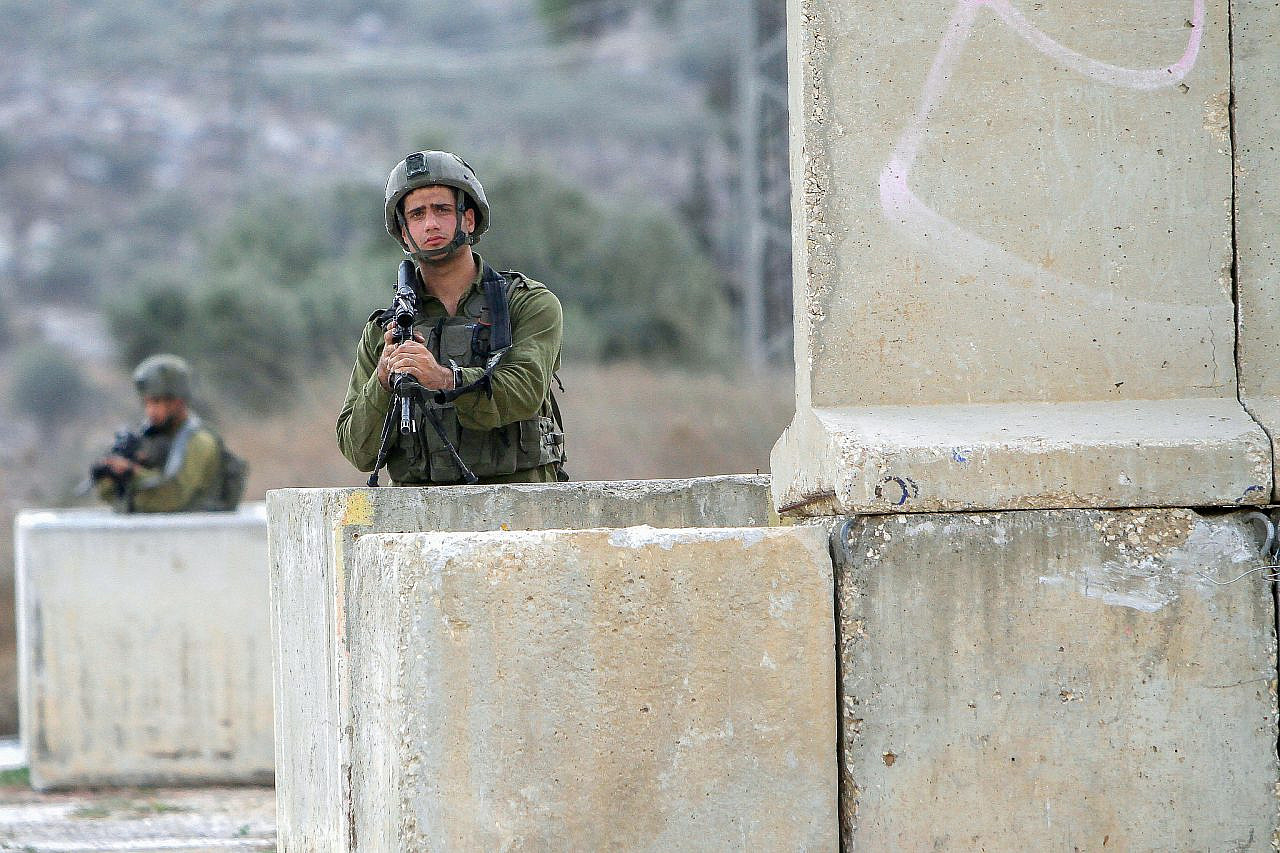 As we made our way through the alternative path, we passed multiple crowds of Palestinians. They either asked us for updates or updated us themselves on what they were seeing on WhatsApp and social media. Passing taxis stopped to ask us which way we were trying. The sense of community and shared experience was, even in those uncertain and dangerous moments, soothing. Eventually we formed a small convoy of Palestinian taxis and private vehicles heading to Nablus, all attempting this last-ditch route.

The rest of the ride passed mostly in silence. After about an hour, the driver looked back at me. “Alhamdullilah. We are in Nablus,” he said jovially. “My wife will have to see me tonight after all.” I wanted to cry.

Nablus remains closed this week, its entrances blocked by Israeli checkpoints, gates, and dirt mounds. The olive harvest that we were planning for this week has been effectively canceled. But even if the city were open, I remain worried about traveling on these roads with my own children, in my own homeland. We were lucky on this night. Many others have not been.

Yara M. Asi, PhD, is a post-doctoral scholar in Health Management and Informatics at the University of Central Florida, and a 2020-2021 Fulbright US Scholar to the West Bank.