With Tzipi Livni joining Netanyahu’s government and President Obama heading to the region, we might be in for another round of a pseudo-‘peace process,’ which has become a code name for an attempt to impose ‘a deal’ on a Palestinian pseudo-leadership. 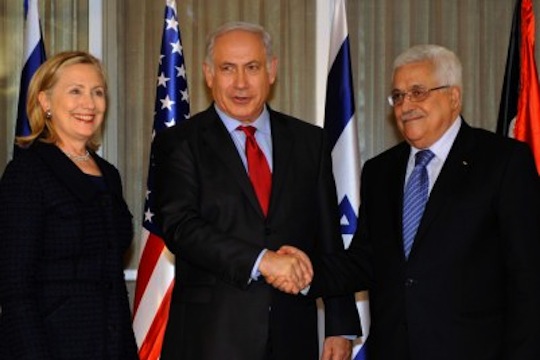 U.S. Secretary of State Hillary Rodham Clinton, Prime Minister Binyamin Netanyahu and President Mahmoud Abbas, meeting in Washington in 2010. A process for the sake of a process could end in nothing, but could also lead to a violent escelation (photo: State Department photo/ Public Domain)

Hatnuah – Tzipi Livni’s new party that won six seats in the last Israeli elections – was the first Knesset party to sign a coalition agreement with Binyamin Netanyahu. Netanyahu needs another 24 Knesset members to have the minimum majority for a ruling coalition. It is very unlikely that he will fail to get them.

Livni was appointed as justice minister, a member of the security-diplomatic inner cabinet, and as the head of the negotiating team with the Palestinians. It is a deal that made both sides happy: Netanyahu won’t be blamed by the Right for offering “concessions” to the Palestinians (I put the word “concessions” in quotation marks because only in the distorted vocabulary of the peace process is giving the Palestinians their most basic human rights regarded as a favor), while Livni can claim to have a significant enough role to justify her position in a right-wing government, especially after leading an anti-Bibi campaign.

From Netanyahu’s point of view, Livni’s support outweighs her relatively small party. In the last elections, the prime minister lost both Ehud Barak (retired from politics) and Dan Meridor (demoted in the Likud primaries), leaving him without an acceptable liaison to the international community, most notably, the United States. Livni is popular enough with the U.S. administration, not to mention other dovish institutions – she was one of the stars of the Saban forum – so she will perfectly fit the position of unofficial foreign minister.

Interestingly enough, while at the Saban forum Livni privately warned Americans she met against the so-called centrists who would rush to serve as Natanyahu’s fig leaf after the elections; but politics, like pornography, is a question of geography, and things you understand as the leader of a 28-seat opposition party appear different when you have only five Knesset members behind you.

The good news is that with Livni at the Justice Ministry, the Right will find it much harder to push some of the radical legislation attempts it pushed in the last Knesset – the most well known being the infamous Boycott and Nakba bills – but one should also remember that much of the anti-democratic legislation came from Livni’s own party, like the national biometric database, which was initiated by Meir Shitrit, now an MK for Hatnuah.

The bigger problem, however, is that we might be in for another round of pseudo-peace process, which has become a code name for an attempt to impose “a deal” on a Palestinian pseudo-leadership.

There is a whole industry of organizations and diplomats who would like to make this happen – many of them already congratulated Netanyahu and Livni on their new alliance, despite the fact that the coalition agreement didn’t even include a general framework for talks on the Israeli side, just vague obligations to resume negotiations. It is worth pointing out the fact that even the settlers don’t oppose peace talks, as Naftali Bennet has publicly stated, since they assume they will result in nothing.

Peace, in the sense of an end to the occupation and a historic compromise, will require a lot of preparation, especially of the Israeli public. The Rabin government made many mistakes, but one couldn’t question the attempt to push the national consensus, first by lifting the ban on negotiations with the PLO and later by constantly communicating a message of peace and partnership to the public. Netanyahu is doing the exact opposite: He promotes a confrontational attitude, reminds the public that the Palestinians shouldn’t be trusted, and he is scaling back previous offers made by Israeli prime ministers.

While Netanyahu might agree again to a partial freeze of settlement constructions east of the security barrier (there are some indications that he is considering this, and anyway most of the projects that chip away land in the West Bank take place around the so-called settlements blocs), he hasn’t come an inch closer to what the international community and the less-ambitious Palestinians see as the minimal threshold for a solution. The Israeli prime minister is rejecting the ’67 borders as the starting point for negotiations, and he is against territorial compromise in Jerusalem. Netanyahu, Livni and Lapid reject even the symbolic offers made by Olmert on the refugee issue in Annapolis, claiming the former prime minister “went too far.” They are not preparing the public for a deal, they are making an argument for the inevitable failure of the process.

I don’t see the world – especially not the United States – investing the necessary political capital in making something meaningful out of the diplomatic process. It is way more likely that the world will turn to the easier, cheaper solution – putting pressure on the Palestinians and then blaming “Arab rejectionism” for the failure of the process. Another interesting option, a regional solution in the spirit of the Arab League proposal, is not on anybody’s agenda.

Forcing the Palestinians to agree to something that doesn’t serve their interests and doesn’t solve any of the core issues is probably the worst outcome of a fake process. This is what happened in the Oslo 2 accord and the Paris protocols, which created the current Israeli system of control in the occupied territories (including the infamous division into Areas A, B and C).

At best a failed process will be meaningless, like the Annapolis summit. At worst, it can lead to a disaster like the second Intifada.

I am not against talks – quite the opposite. But talks should begin with an Israeli recognition of the urgent need to end the occupation and find a just and adequate solution for the refugee problem. The main thing that should be discussed is the way to achieve those goals. As long as most Israeli leaders – not to mention many in the international community – think that ending the military regime that has governed Palestinian lives for half a century is “a concession” that should be negotiated, nothing good will come out of the process.

Related:
With Livni as his fig leaf, Bibi can now form an extremist government
One or two states? The status quo is Israel’s rational choice
‘No solution,’ says the oppressor to the oppressed