Legal advocates decry Israeli policies toward migrant workers as inhumane and claim that they violate the laborers’ human right to family.

Maris Delusong, a 36-year-old caregiver from the Philippines, is alone at Tel Aviv’s Central Bus Station. She stops at a sale rack outside a clothing store. She looks at the baby clothes, pulls a pink onesie off the rack and runs her fingers over the soft fabric. Her face is sad as she puts the outfit back and moves along.

“It’s hard to be alone,” Delusong says. She found herself drawn to the baby clothes, she says, because “I remember my children. She’s four, the youngest. The eldest is 12.”

Delusong is five months into a five year “deployment”—the term Filipino migrants use to describe working overseas. Delusong takes care of an elderly woman in Kfar Saba. In Israel, wages are much higher than they are in the Philippines and, here, Delusong can save for her family’s future.

But while Delusong can work legally in Israel to earn for her husband and four children, Israeli law does not allow her or other migrants to bring their immediate family with them to the country. This puts tremendous stress on workers, their marriages, and their relationships with their children. The damage to the family can last long after a laborer has returned home.

“If I had a chance to bring them [my husband and children to Israel], I would,” Delusong says.

However, there is no a blanket prohibition preventing all foreigners from bringing family members to Israel. Diplomats, embassy workers, “experts” and such—in other words, white collar workers—can carry spouses and children on their Israeli visas.

Rotem Ilan, Director of the Association for Civil Rights in Israel’s (ACRI) Israeli Children project explains that migrants’ inability to bring their children with them “stems from the [Israeli government’s] fear that they will ‘put down roots’ in Israel… the state’s goal is to prevent them [non-Jewish migrant workers] from ‘putting down roots’ in Israel.” So, to the state, family life becomes a “threat,” Ilan says.

Not only are laborers prevented from bringing their families to Israel, once foreign workers are in the country, the state puts various restrictions on their ability to have children here. If a migrant gives birth when she is four and a half years or more into the 63-month visa Israel issues to most foreign laborers, she may not remain in the country with her child. This means that she must choose between keeping her baby with her in Israel or keeping her legal status and job.

If a woman whose husband is also working in the country gets pregnant before the four-and-a-half-year mark she must “choose between her husband and her baby,” Ilan says. “One of them has to go.” 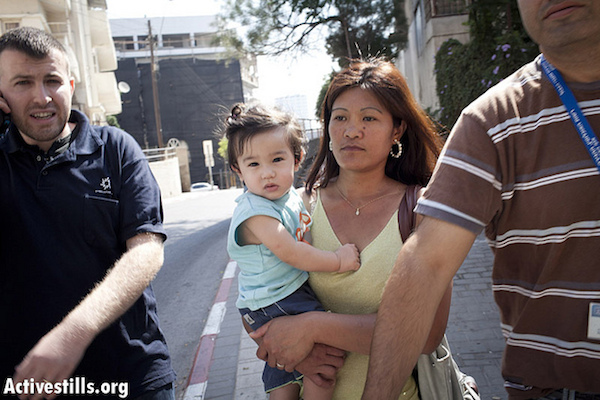 Israeli authorities arrest a migrant worker and her small child [file]. (Photo by Oren Ziv/Activestills.org)
Ilan and other critics of Israeli policy towards migrants say that the state’s treatment of foreign workers and their families is inhumane and violates the workers’ human rights, including the right to family. And while recent years have seen small victories for workers and their children, including the naturalization of hundreds of youth who were facing deportation, the state has essentially reversed those gains by coming up with even stiffer regulations.

In 2006, the Israeli High Court struck down a policy known as the “binding arrangement,” which tied caregivers to their Israeli employers, who had the power their legal status. In their ruling against the binding arrangement, the Supreme Court justices likened it to “modern day slavery.”

But in 2011 the Knesset passed a new piece of legislation that human rights organizations refer to as the “Slavery Law.” It limits caregivers’ ability to leave employers by restricting them to three job changes before they lose their visa. It also confines caregivers to pre-determined areas of the country, impinging on their freedom of movement.

Ilan points out that, like the binding arrangement, the “Slavery Law” sometimes prevents workers from leaving abusive employers. “Binding a worker to an employer does not respect [the worker’s] human rights,” Ilan says. Regarding the geographic restrictions placed on workers, she adds, “If we wanted more Israeli teachers in the south of Israel, we wouldn’t say if you don’t teach there, we’ll put you in jail.”

Migrant workers’ children also face imprisonment and deportation. Even though they’re born and raised in Israel, they are denied legal status. “There’s no way to get citizenship or residency if you’re not Jewish,” Ilan remarks.

Although Israel has twice opened “one-time windows” to naturalize “illegal” children, the state lacks a cohesive policy about how to deal with these non-Jews, many of whom speak Hebrew and have never visited their parents’ home countries. At the same time, Israel continues to bring migrants to the country and those workers continue to have babies that the state refuses to recognize. In 2013 alone, some 200 children were arrested and imprisoned before being deported along with their mothers.

Michelle Trinanis, 18, was one of 1,200 children threatened with expulsion in 2009 when Israel announced its intention to deport migrant families. Although the state opened a “one-time window” in 2010 that will lead to the naturalization of 700 of those children — 600 have already received status and, according to Ilan another 100 will receive their IDs — Trinanis was one of the many whose applications were initially denied despite meeting all of the criteria.

After a protracted legal battle, which went all the way to the Israeli Supreme Court, Trinanis finally has an Israeli identity card. In December, she will begin mandatory service in the army — the road to acceptance in mainstream Israeli society.

Although she doesn’t know yet what she will be requested to do in the military, Trinanis is happy and excited to join. “I already fought to stay in the country, so I will fight for the country,” she says.

But she admits that it’s “unfair” that other migrants’ children are not getting legal status. And Trinanis says that she remains conflicted about the issue. She has friends who were not naturalized; she tries to give them the same support and encouragement that others gave her when she was struggling with the threat of deportation.

On the other hand, Trinanis says she understands the state’s reasoning.  “When I was young, I thought ‘why can’t they give anyone a teudat zehut (Israeli ID)?’ I understand now that it’s a big problem [because of] the laws.”

“Israelis,” she explains, “are loyal to themselves.”

Trinanis’s words reflect the government line: for years, Israeli officials have claimed that its policies towards migrants and their families stem from concern about maintaining the country’s demographics and preserving a Jewish state.

Responding to officials’ claims that foreign workers and their children pose a “demographic threat,” Ilan says, “Then the country can’t bring new people. [Israel] can’t have it both ways—the state can’t bring people that are good enough to work for us but not good enough to be a part of us. If you bring human beings to the country, you have to give them human rights.”

emailemail
Before you go…
A lot of work goes into creating articles like the one you just read. +972 Magazine is nonprofit journalism, owned by many of our writers, editors, and journalists. In order to safeguard that independent voice, we are proud to count you, our readers, as our most important supporters. With your support, we can keep +972 Magazine a strong, independent, and sustainable force helping push the global discourse on Israel/Palestine.
DONATE
More About caregivers 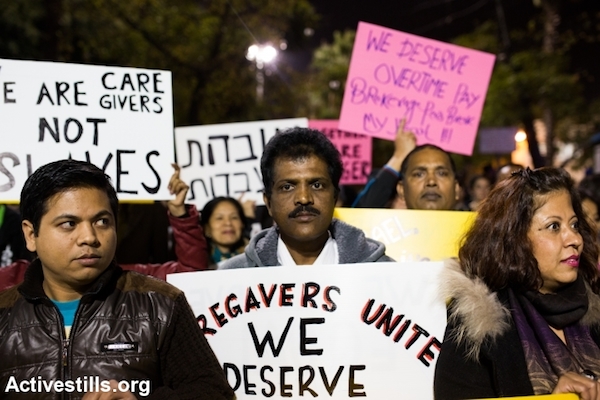 Denied basic labor rights, migrant caregivers take to the streets
The some 60,000 migrant workers who care for Israel’s elderly don’t receive the simplest of labor rights like overtime pay, guaranteed rest hours and vacation, are often locked into a form of debt bondage. By Jacob Udell While thousands of asylum seekers filled up Levinsky Park to organize a three-day general strike Saturday night, a…
By +972 Magazine January 5, 2014 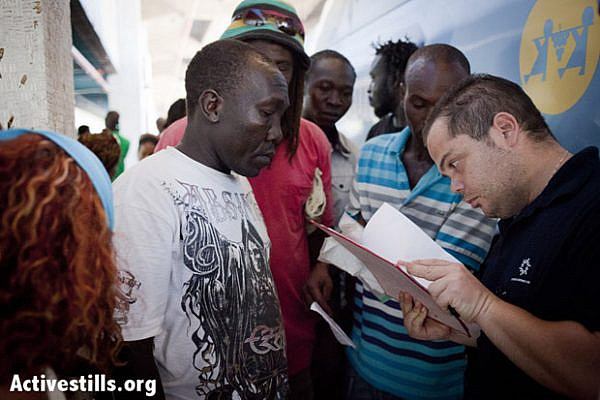 When ‘black’ becomes synonymous with ‘infiltrator’
Israeli society is undergoing a process by which the words ‘Eritrean’ and ‘Sudanese’ are becoming synonymous with the word ‘cleaner,’ while ‘Filipina’ has long ago become synonymous with ‘caregiver.’ And who else is behind the education process if not the Interior Ministry and the Justice Ministry? The job market in Israel has always been divided along nearly…
By Laissez Passer June 13, 2013 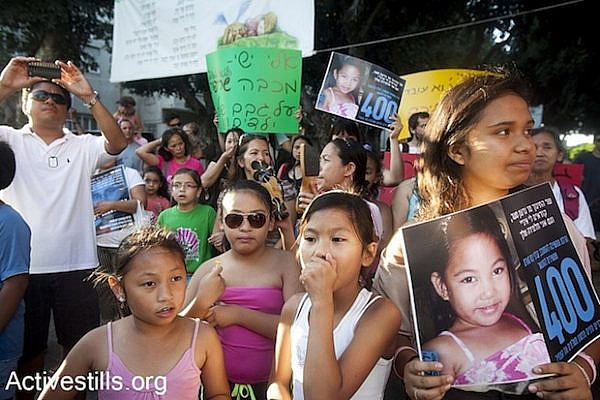