For a secular Jewish woman in Jerusalem, the funeral of Rabbi Ovadia Yosef presented an opportunity to cross one of the city’s strongest yet invisible boundaries – entering the bowels of the ultra-Orthodox world. 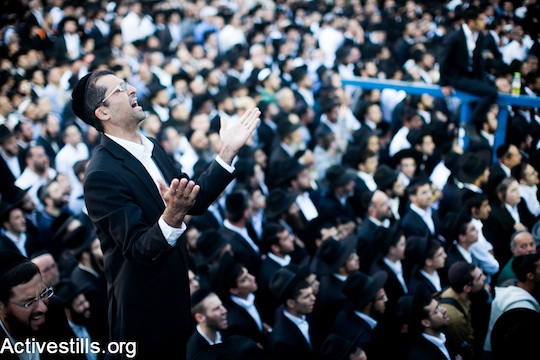 When you belong to the dwindling minority of secular Jewish progressives in Jerusalem, it’s hard to sustain more than the standard rant against religious oppression. But while flatly opposing the politics of faith that run this place may be the way to go pragmatically, it runs the risk of throwing out the human interest with the bathwater. On a day when a sheer surge of humanity brings your city to a standstill, as well over half a million people flock to mourn the passing of a hero, writing the traffic jams off as annoying is simply a bore. So instead of joining in the camaraderie of secular complaints, I decide on the spur of the moment to cross the lines – and see what I can find. 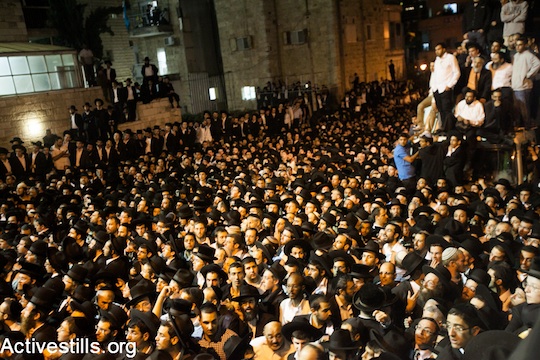 Finding the spot itself isn’t hard. I simply follow the men in black hats streaming from every corner. I didn’t come prepared, so I’m concerned that the tights I’m wearing will draw unpleasant comments or even objections to my presence. Luckily, I have a scarf to cover any errant bits of torso.

The streets leading towards the main yeshiva where the funeral procession is concentrated are packed with men. I’m relieved to spot a young girl in religious seminary uniform, holding a child by each hand and looking like she’s debating which direction to take. She happily agrees for me to join her, and we head down one of the streets together. Her name is Naomi, she’s 18, and beneath her docile demeanour I quickly discover a sharp, opinionated mind.

It turns out that we didn’t have to worry about which way to go, because all roads lead to Rome and in this case, to the mind-boggling mass of people we join. Bodies pressing us from every direction, we remain in the same spot for the next three hours.

The event consists of eulogies being read out – or, more precisely, wailed – into a microphone that relays them to the surrounding streets through several ill-adjusted loudspeakers. The prevailing feeling is one of slight frustration, as everyone strains to make sense of the largely unintelligible sounds. Quite a few bright souls brought earphones and are listening to radio broadcasts of the event through their cellphones. 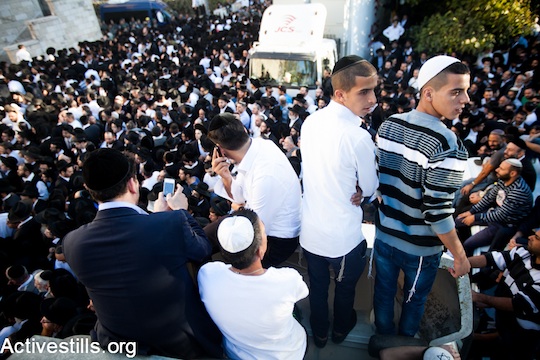 In general, cellphones play a surprisingly dominant role in the scene. They glow everywhere in the dusk, as people whisper instructions to friends on the phone, send flurries of texts, and ostensibly listen to the broadcast (although I’m pretty sure the cherubic-looking yeshiva boy staring dreamily ahead is listening to something more earthy). The girl pressed up against my elbow is fervently reading Tehilim (Psalms) by the light of her phone.

The crowd is disappointingly placid. I had expected tears, pulling of hair, visible grief. But people, at least where I stand, seem to be largely there as a sign of respect, rather than using the opportunity to mourn personally. I suspect that at least some are there for the epic thrill, like me. 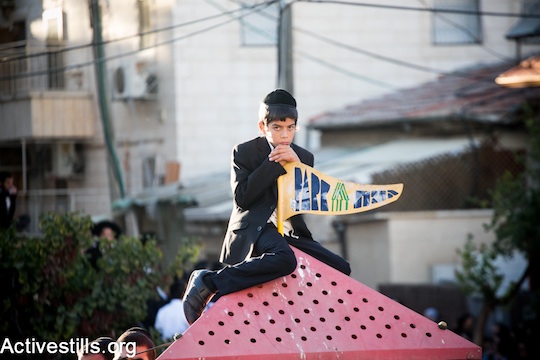 Naomi and I are soon joined in conversation by a man from Beitar Illit (a settlement south of Jerusalem) eager to share his admiration for the rabbi with me. The two of them exemplify the diversity I see all around me: although my field of vision is dominated by the predictable black hats and suits of ultra-Orthodox men, the variety of yarmulkes and attires that I see attest to the rabbi’s importance to vastly different Jewish religious groups. Naomi came to pay her respects to a great spiritual leader, even though she has no affiliation with the Sephardic Shas party that he led. Sporting all the symbols of the “national-religious” stream, the man who joined us most likely served in the army and believes in the expansionist version of Zionism. Therefore, I assume, he is politically at odds with his wispy-bearded ultra-Orthodox peers surrounding us.

Everyone I talk to repeats that the rabbi’s devout scholarship and practice of halakha (Jewish law) bridged these gaps and led the collective to a higher spirituality. He used to wash those who came to him for help with his tears, they tell me with shining eyes; he could quote you the page number of any reference you needed. His library reached the ceiling.

Still, one gap that isn’t bridged is the one separating men from women where I stand. Although everyone is jostling together at first, the crowd quickly and seemingly organically splits, so that the men – the vast majority – take up the road while women are crammed onto the narrow sidewalk. Naomi explains that many of her girlfriends didn’t come because they felt it would be immodest.

A man yells at the crowd to make room for the women so that the men don’t have to touch them, while inadvertently digging his elbow into my breast. I don’t bother to point out the irony. I am, however, quietly pleased to note that the women on the side actually have a better vantage point for spotting the hearse, the centrepiece of the event, as it drives by. Using the advantages of the margins, as always.

Naomi and another teenage friend excitedly exchange celebrity spottings, and it takes me a second to realize that they’re talking about rabbis. I can’t help noticing that they sound exactly like the last time I heard a 14-year-old go gaga about One Direction. When Naomi’s friend tells me that some girls at her seminary fainted when they heard the news of Rabbi Ovadia’s death, I’m not surprised.

I am surprised, however, when our new acquaintance from Beitar Illit explains to me that the rabbi did not die of illness or of old age, but because of our sins. I pause over being automatically included in the “we” that encompasses anyone Jewish and so blatantly, although implicitly, excludes anyone else. But mostly, I’m taken aback by the martyrdom angle. When I ask what “we” can do so that no other spiritual leaders have to sacrifice themselves for our sins, he has no answers.