The eponymous scene of On the Side of the Road, a documentary that explores Israeli attitudes toward the Palestinian Nakba, or catastrophe, occurs midway through the film on an unpaved road just outside the West Bank settlement of Ariel. Interrupted by a curious Israeli family out for a pastoral drive, director Lia Tarachansky stops to answer their questions about what she is filming (“what TV channel will it be on?”). As they drive on, the children waving and smiling their good byes, Tarachansky stands alone on the side of the road and suddenly bursts into tears. “I mean, everyone I love is here,” she weeps, as she faces the sprawling settlement. “You know?”

Tarachansky, a journalist who works for The Real News, was raised from the age of six in Ariel, one of the largest settlements on the West Bank. Standing on that quiet stretch of road, surrounded by Palestinian villages, she says, “This is where I am from. I don’t know anything else.” Both statements are heartfelt, but neither is completely true. Tarachansky was born in Kiev, in the former Soviet Union, but raised from the age of six in Ariel. Like most Israeli children she learned nothing in school about the Nakba, or catastrophe— the Arabic name for the dispossession and exile of the Palestinian people in 1948.

Reading Ilan Pappe’s The Ethnic Cleansing of Palestine as a young adult “was my first encounter with this history,” she said in an interview conducted via Skype. 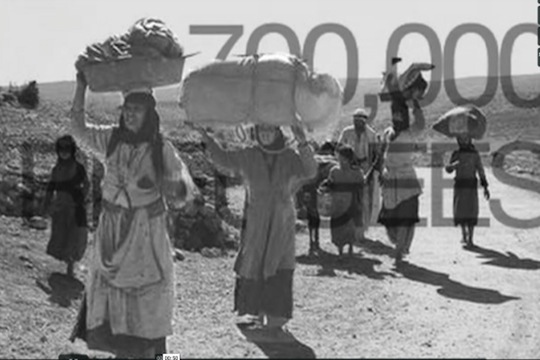 Her search for more information led her to the Israeli NGO Zochrot, which documents destroyed Palestinian villages and towns in an effort to raise awareness of the dispossession of 1948. Ultimately, she decided to make a documentary film about the subject, and how it is viewed by Israeli society. Today she lives in Jaffa, and is deeply immersed in the activist community. But what she is saying and showing in this scene outside Ariel is that the community in which she is rooted is the one that nurtured her and which she still loves, even though the divergence in their political views has now left her marginalized from mainstream Israeli society—and thus metaphorically “on the side of the road.” Asking questions about the Nakba is the biggest taboo in Israeli Jewish society.

The film’s opening scenes occur in Tel Aviv, on the eve of Israel’s Independence Day. People are dancing to live music in Rabin Square and spraying one another with foam while fireworks light up the sky. Meanwhile, at the Zochrot office just off the square, a group of volunteers are preparing to go out with posters to raise awareness of the Nakba Law. Passed by the Knesset in 2011, the law grants the government the authority to impose severe financial penalties on any publicly-funded organization that marks Independence Day as a day of mourning. Not everyone on the street is overtly hostile to the Zochrot volunteers with their posters, but those who are express their rage with extreme language. One woman, who describes herself as the child of survivors who lost three brothers during the Holocaust, says proudly to an activist, “I am a racist. I don’t want Arabs here and I don’t want you here, either.” Ultimately, the police step in and call a halt to Zochrot’s activism, claiming they are causing a provocation that amounts to disturbing the peace.

One of the interesting and impressive aspects of this scene in particular, and the entire film in general, is that Tarachansky manages to show an upsetting reality without dehumanizing the people she interviews and films. It is clear that she identifies or empathizes more with some of her interview subjects than others, but she maintains a detached compassion for everyone.

The question Tarachansky explores in the film is how Israelis respond to the subject of the Nakba. Israelis are surrounded by the ghosts of that great Palestinian dispossession—for example the weed-choked ruins of villages like Lifta, its half-crumbled homes picturesquely clutching the hills just outside of Jerusalem. In interviews with former Palmach fighters of the ’48 war like Tikva Honig Parnass, who became an anti-Zionist activist in the 1960s, and Amnon Noiman, now active in Zochrot, the two veteran Israelis speak openly about the shocking experience of becoming aware of memories they had repressed—of villages they had helped destroy and civilians they had seen killed. Honig Parnass recalls her astonishment upon realizing that she had for years completely forgotten wandering through an abandoned village where the dishes were still on the table.

Tarachansky, too, remembers her own shock when she heard the Muslim call for prayer from the mosques in the villages around Ariel. She had grown up in Ariel, but only after she spent some years away from the place, during which she became aware of the Nakba, did she really notice her surroundings.

“To understand denial,” explained Tarachansky, “You need to understand dehumanization. If you look at every place where there was a mass dispossession, there was first a massive campaign of dehumanization. The Zionists were no different in this sense. It wasn’t the Holocaust survivors who planned the dispossession. They came into a situation that was pre-determined long before. There’s no way they would have been expelling if they hadn’t planned for it.”

But Tarachansky’s goal is not to blame or even to teach. It is just to examine and narrate.

“I don’t think I’m some enlightened being. This place does not fit into any kind of black and white prescription, even though there are some elements that resemble apartheid and totalitarianism, Weimar and the Soviet Union. But there is no one category that it falls into. The Israeli nationalist narrative has been so speeded up by the trauma of the Holocaust and the government’s campaign that besides being destructive it’s also fascinating. But I am an Israeli and I love this place and its people.”

Will the film change minds? “I don’t know,” she answered. “There has never been an Israeli film that connects 1948 to 1967 and the stories of Israelis and settlers and Palestinians. In that sense it’s a unique film. I personally don’t think it’s a radical film. But in Israel today talking about equality and historical justice is very radical.

“On the Side of the Road” will have its premier screening at the Tel Aviv Cinematheque on Thursday evening at 6 p.m., under the auspices of Zochrot’s  International Film Festival on Nakba and Return.

This review is cross-posted from the Daily Beast’s Open Zion.