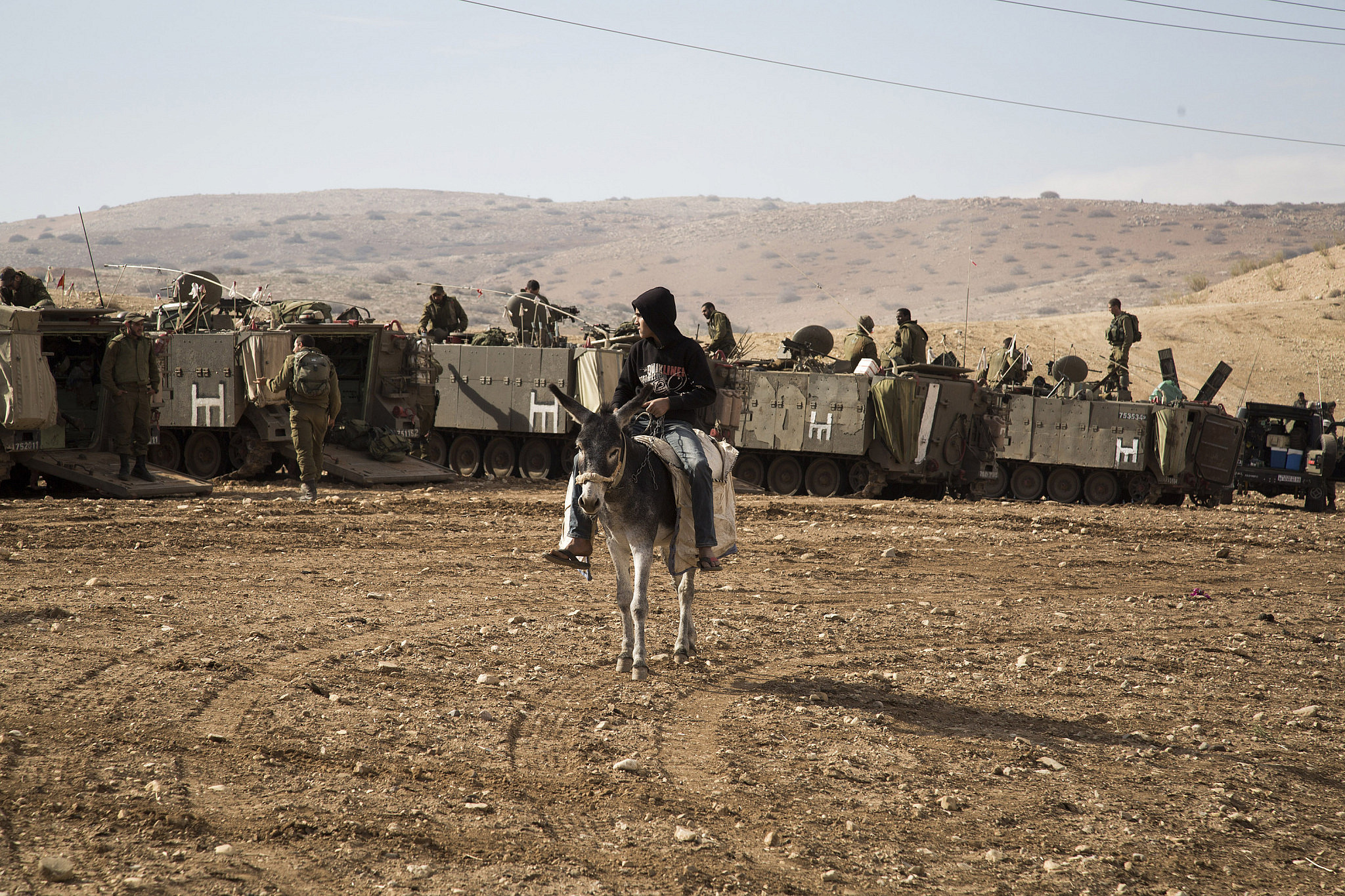 A Palestinian boy on a donkey looks at Israeli army vehicles as they park during an Israeli military training in the northern Jordan valley, West Bank, on December 8, 2016. (Keren Manor/Activestills)
facebook twitter email link

A never-before-seen document reveals that Israel created “military firing zones” in the occupied West Bank as a mechanism for transferring land to settlements. Those firing zones, which on their face were established for the purpose of military training, were built as part of a larger strategy to create an “ethnic border” between Jews and Palestinians.

According to the minutes of a “top secret” 1979 meeting by the World Zionist Organization’s Settlement Divison, which works in tandem with the Israeli government, then-Agricultural Minister Ariel Sharon explained that he created firing zones across the West Bank for the sole purpose of eventually handing the land over to Israeli settlers.

“As the person who initiated the military fire zones in 1967, they were all intended for one purpose: to provide an opportunity for Jewish settlement in the area,” Sharon said at the meeting. “As soon as the Six-Day War ended, I was still sitting with my division in Sinai. I was in Sinai when I drew up these zones. The firing zones were created for one purpose: land reserves for settlements.”

Sharon’s remarks have far-reaching effects 40 years later, as thousands of Palestinians in Masafer Yatta, the greater South Hebron Hills, and the Jordan Valley are currently under direct threat of expulsion after their land had been declared military firing zones.

The Settlement Division had convened to discuss the establishment of settlements in areas delineated firing zones in the Jordan Valley, which were thus closed off to Palestinians. Sharon explained that he had set the boundaries of the firing zones from the onset, and ordered the transfer of military bases to the West Bank so that the land would be seized for settlement purposes. 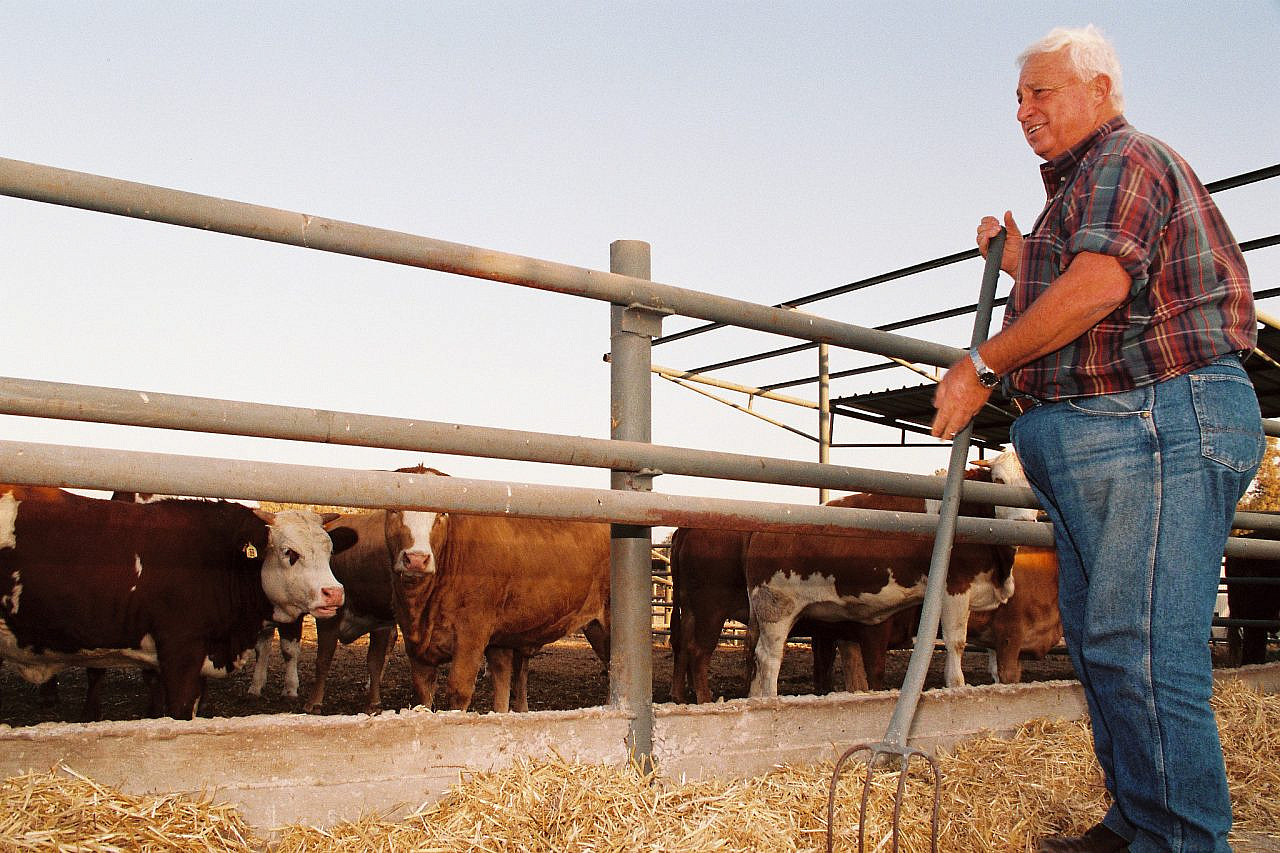 Sharon would become even more explicit about his plans for the firing zones. Just two years later, during another meeting of the Settlement Division, the minister said that Firing Zone 918 was declared on top of Masafer Yatta in order to stop the “spread of the Arab villagers on the mountainside toward the desert.” In May, the Israeli High Court green lit the expulsion of over 1,000 Palestinians from eight villages in Masafer Yatta to allow the army to train in the area.

At the High Court hearing, the state claimed that the destruction of these communities — which residents say have been there since at least the end of the 19th century — is necessary for training. Last week, the army began sending tanks, using live fire, and placing mines near the village homes.

Two additional documents unearthed by +972 shed light on the political motivation behind the establishment of settlements and firing zones in the South Hebron Hills. According to Sharon, he sought to create a “buffer zone” between the Bedouin citizens of Israel in the Negev/Naqab and the Palestinian residents of the southern West Bank, where Masafer Yatta is located.

“There is a phenomenon, which has been going on for several years, of physical contiguity between the Arab Negev population and the Arabs of Mount Hebron. A situation has arisen in which the border [of Arab-owned land] has deepened into our territory,” Sharon told the committee in January 1981. “We must quickly create a settlement buffer zone that will separate between Mount Hebron and the Jewish community in the Negev.” Sharon even went so far as to label this buffer zone an “ethnic border” that will prevent the Palestinians of the West Bank from reaching the “suburbs of Be’er Sheva.” 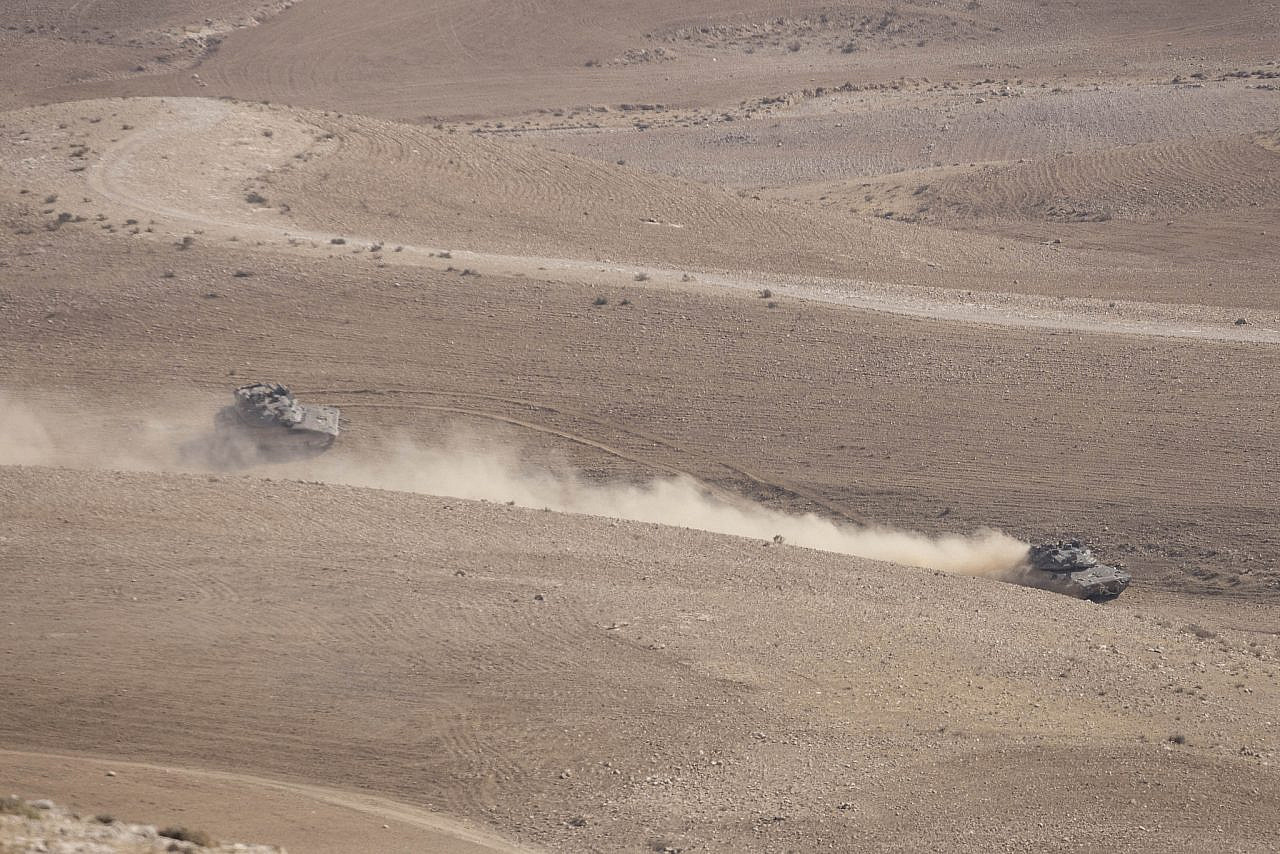 Palestinian residents of the village of Al-Majaz watch as Israeli tanks train in the Masafer Yatta area in the southern West Bank, June 21, 2022. (Oren Ziv)

Protocols from a 1980 meeting reveal Sharon returning to the same issue: “In Hura [a Bedouin township in the Negev/Naqab], there is a growing Arab community of thousands of people. This community has contact with the Arab population of the South Hebron Hills. Thus, the border will practically pass in the vicinity of Be’er Sheva, near Omer [an affluent town in the Negev-Naqab]. Let’s assume that I add tens of thousands more Jews to Dimona or Arad [two working-class cities in southern Israel], and I want them there. How will I close this gap? How will I drive a wedge between the Bedouin in the Negev and the Arabs of the South Hebron Hills?”

Sharon would soon get an answer to his question. That year, Israel declared 30,000 dunam [7,500 acres] of land in the southern tip of the West Bank military firing zones. As Sharon had clear, these zones were created as ethnic borders: to the south of the military zones were dozens of unrecognized Bedouin villages inside Israel, while to the north and the west were the Palestinian cities and towns of the South Hebron Hills. Inside the military zone remained the thousands of Palestinians who now face population transfer.

During these discussions, Sharon even ordered the establishment of new Jewish settlements in the Negev-Naqab, such as Meitar, as well as in the occupied South Hebron Hills, such as Maon and Susiya, which would form part of the same buffer.

For Sharon, like many other Israeli leaders, the very notion of contiguous Arab territory was a direct threat to the state’s ambitions for controlling as much land as possible on both sides of the Green Line. Even today, Jewish settlement in the West Bank and the Negev/Naqab remain a crucial part of Israel’s strategy of control.

According to a report by Kerem Navot, an organization that tracks settlements in the occupied West Bank, as of 2015, approximately 17 percent of the West Bank has been designate parts of various military firing zones — most prominently in the Jordan Valley, the South Hebron Hills, and along the eastern border with Jordan. Most of these designations were made immediately following the occupation of the West Bank in 1967 and in the early 1970s. According to the report, the army only uses around 20 percent of these zones for training.

Some recent examples show that Israel is going even further than Sharon’s ethnic buffers between Jews and Palestinians. Today, Palestinians across the West Bank are being expelled from firing zones, while settlers are slowly taking their place. 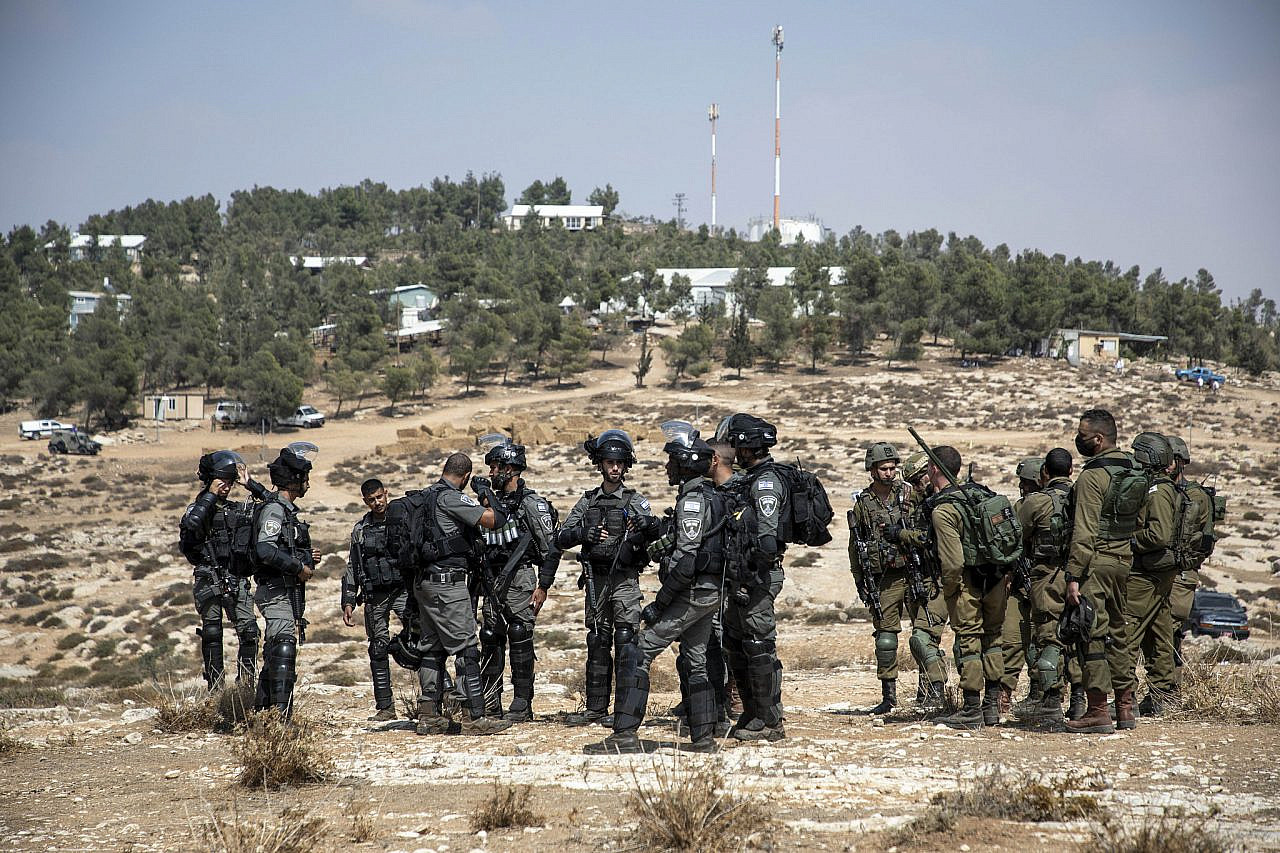 Over the last decade, for example, settlers have established 66 so-called farm outposts, which take up huge swaths of land in the West Bank, despite having few residents. Approximately a third of that territory, 83,000 dunam [205,000 acres], which settlers have taken over through grazing, are located inside military firing zones. These areas — at least on paper — are supposed to be off limits to Jews and Palestinians alike. Israeli soldiers in the Jordan Valley have even openly admitted that they allow settlers to use firing zones while prohibiting Palestinians from doing the same.

Dror Etkes, who heads Kerem Navot, told +972 that there has been a significant increase in settler takeovers of firing zones over the past few years. “This is the logical extension of the things Ariel Sharon did 55 years ago. The farm outposts were planned in such a way that will allow them to take over large grazing areas, which were declared military firing zones back in August 1967,” Etkes said.

This mechanism is working overtime in the South Hebron Hills. Last year, the Settlement Division allocated land in Firing Zone 918 to one of the settlers living nearby. Aerial photos show that new structures belonging to three outposts — Mitzpe Yair, Avigayil, and Havat Ma’on — which were established in the area in 2000, have been built in the firing zone. Last year, settlers even tried to establish a brand new outpost directly inside the firing zone.

That firing zones are used to bolster the settlement project and the dispossession of the native population of the occupied territories is, by now, an open secret, and everyone is in on it — except the Palestinians.