By Dahlia Scheindlin and Larry Derfner

A lively crowd of approximately 1000 people, according to estimates by the Israeli media, gathered at Habima Square in Tel Aviv to voice its opposition to a war between Israel and Iran. Although hoping to capitalize on the energy of a surprisingly successful grassroots internet campaign that seemed to sweep the whole country last week, the protesters had all the hallmark attributes of a left-wing demonstration: large red flags associated with Hadash, the far-left Jewish-Arab party, calls for the Netanyahu government to resign, and no Israeli flags. 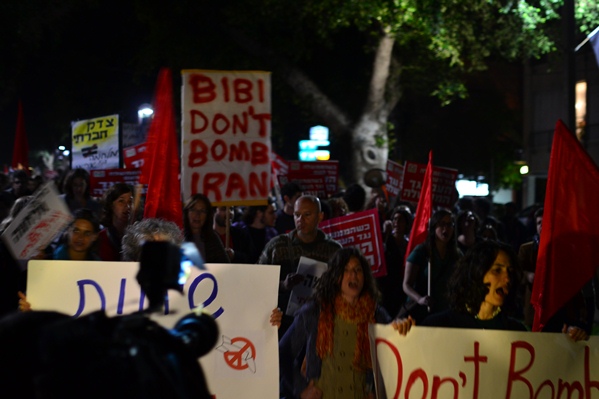 Unlike most such gatherings, including left-wing and peace demonstrations, there were no politicians in sight – certainly none representing parties or speaking publicly.

Slogans, chants and signs directed most of the attention at the Prime Minister, calling “Bibi, don’t bomb Iran,” and exhorting him to “talk” instead of starting a war. Some implicitly accused Netanyahu of colluding with American Jewish leaders to ratchet up the war rhetoric, describing relationship with AIPAC as a love affair. 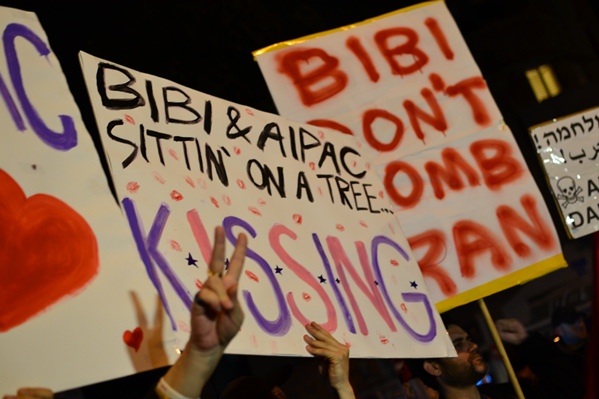 Others said that an attack on Iran will come directly at the expense of social justice in Israel. Only one chant tried explicitly to say what the demonstration was actually trying to convey: “The majority of the public is against the war.”

Then there were the counter-demonstrators, who consisted mainly of angry individuals, rather than any organized group. One young man stood on a bench holding his middle finger up defiantly as the procession marched by, while another couple stood nearby, gaping. The man said “Are these Jews? Tell me – are they Jews?” One sign could be seen bobbing inside the crowd throughout the procession, reading ‘As usual, the left embraces the enemy.” At first its owner stood on the sidewalk, then joined the crowd marching up King George, where he was safe from harm. How would a lone leftist carrying a settler-bashing sign fare at a right-wing rally?

One smiling woman held a sign that said simply, “Make Sense, Not War.” When asked if she thought Israel would attack Iran, nonsensical though this may be, the woman, Ifat Zvirin, stopped smiling and said, “I think so. The odds are that it will happen.” Was there any way to prevent it? She said, “If people are strong and say no, then yes.” Did she think that would happen? “From past experience, no. But one must always hope.”