Protesters denounce Israel’s deadly response to the Gaza return march on Friday, when Israeli troops killed at least 15 demonstrators and wounded at least 1,400. 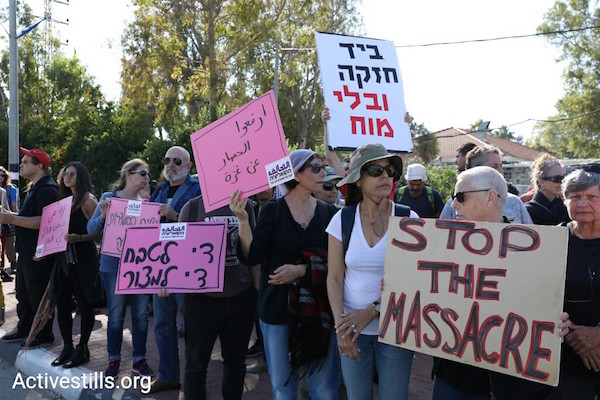 Israelis protest in solidarity with Gaza near the border. March 31, 2018. (Oren Ziv / Activestills.org)

Some 300 Israelis protested along the Gaza border Saturday in solidarity with the Great Return March demonstrations in Gaza that began a day earlier. Across a field of wheat, the white tents of the march were visible through the early-spring haze.

The protest was organized by the Coalition of Women for Peace, a feminist, anti-occupation organization.

On the Gaza side of the border fence, Israel forces reportedly wounded 25 Palestinian demonstrators on Saturday.

On Friday, Israeli troops killed at least 15 and wounded 1,400 demonstrators taking part in the first day of the “Great Return March,” 45 days of protests and events planned to mark 70 years since the Nakba.

The protests in Gaza took place at several points along the besieged coastal strip’s border. The Israeli solidarity protest came partly in response to Israel’s violent suppression of the protest on Friday. At least 30,000 people took part in the march on Friday.

The Israeli army did not report a single injury among its troops, although it resorted to using deadly force against the unarmed demonstrators. A number of Palestinian youths threw stones and burned tires toward the Israeli border fence. Late in the day, after most of the marchers departed, the Israeli army said that two armed men approached the border and were subsequently killed. Israeli troops had already shot over 700 people before that incident occurred.

“I don’t know what to say. There was no justification for what they did to us,” Hasan al-Kurd, one of the organizers of the Gaza return march, said after the protest ended on Friday. “I saw children and entire families standing more than half a kilometer from the fence and they still shot at them. Why? What threat do children standing hundreds of meters away pose to tanks and armed soldiers?”

“Today we suffered many deaths and injuries,” al-Kurd added. “But do they think this will really stop us? We don’t have any other options but to continue to protest.” Israelis, members of the Coalition of Women for Peace, demonstrate in solidarity with Gaza. March 31, 2018. (Oren Ziv / Activestills.org)

The organizers of the Gaza return march had said explicitly that the protest was meant to be nonviolent. And yet even before the march began Israeli security forces launched a public campaign painting it as a violent, Hamas-sponsored event. The Israeli army’s chief of staff announced the deployment of 100 snipers, and Israeli generals warned ahead of time that there would be Palestinian casualties.

Friday’s march in Gaza also coincided with the anniversary of Land Day, which itself commemorates how in 1976 Israeli security forces responded to a general strike and mass protest of Palestinian citizens of Israel by killing six and wounding some 100 others.