The decision to promote construction plans for the E1 area and build 3,000 housing units in the West Bank has European diplomats making a last-ditch effort to save the two-state solution. 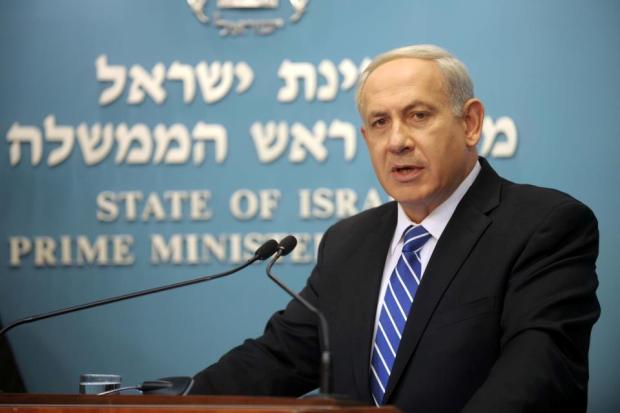 Israeli ambassadors in several European capitals have been summoned to receive angry responses to Jerusalem’s recent decision to construct 3,000 new housing units in the West Bank settlements and promote the zoning plan for E1 area, northeast of Jerusalem. E1 is the only remaining corridor between the large Palestinian cities in the West Bank. It is the final brick in the great project Likud and Kadima prime ministers have been carrying out in the last two decades, which is designed to encircle the Palestinian part of Jerusalem with Israeli settlements and neighborhoods in such a way that would permanently prevent and division of the city, or any other territorial compromise, for that matter.

A spokesperson for the German embassy expressed “great concern” over the decision and called the Israeli government “to reconsider it.” The head of the French foreign office told the Israeli ambassador that the settlements are “illegal by international law.” Similar messages were expressed by the Netherlands and the British governments. 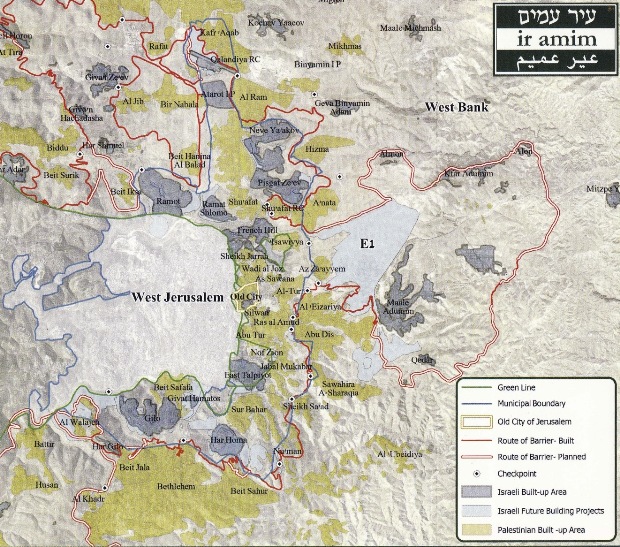 Greater Jerusalem Map, Updated 2011. The E1 area will complete the Jewish “ring” around Palestinian East Jerusalem, and will disconnect the north of the West Bank from its south (source: Ir Amim)

The language of the European responses seems unprecedented. Haaretz reported this morning that Britain and France were considering recalling their envoys to Tel Aviv (a report later confirmed by the British network Sky). Such a move seems highly unlikely, but the very notion marks a new low point in relations between the Israeli government and its European allies. After four years in power, Benjamin Netanyahu and his government have managed to isolate Israel in a way never seen before.

Yet in the internal Israeli game, all of this won’t matter that much. The Israeli public has grown used to hearing European and American reports which condemn settlement construction projects. The same headlines have been declaring that “the American administration is dismayed” or that “the European Union condemns…” for the last four decades. It seem that Netanyahu won’t lose support with the public, meanwhile Likud ministers have been going around explaining to the public why only “light measures” against the Palestinian Authority were taken.

In the early evening, a government spokesperson told Haaretz that the decisions Israel has made – among them the confiscation of almost half a billion shekels ($120 million) of tax money that Israel collects for the PA – will not be reconsidered. The government also announced that further steps will be considered if the PA takes any other unilateral actions. Jerusalem, it seems, simply sees Palestinians – their foreign policy included – as its prisoners, subjects to sticks and carrots according to the degree to with which they stay in line with the Likud’s policy objectives.

It is not surprising though that the diplomatic drama of the last couple of weeks is met with indifference among both the Israeli and the Palestinian public. I highly recommend reading Haggai Matar’s account of the sad “independence night” in Ramallah. Clearly, any sense of Palestinian national pride that the UN vote could have brought has been overshadowed by the understanding that at this point in time, there is nothing further from reality than the establishment of a contiguous, independent Palestinian state.

The debate over what contiguity means reflects the low point in which we find ourselves. Under the Oslo accords, Israel specifically committed to viewing the Gaza Strip and the West Bank as one unit. A couple of years ago, I posted an official IDF slideshow, casually mentioning the separation of the Gaza and the West Bank as an Israeli policy objective. Today, with the settlement of Ariel (16 miles into the West Bank) and its access road seen by the government as one of the future “settlement blocs” which will be kept in Israeli hands, and with construction in E1 moving forward, it seems that the West Bank alone will soon be torn into three pieces. The Gaza Strip – whose border is open only from its Egyptian side – could just the same be on a different planet. And the future? Even if Israel was to remove some 50 to 80 thousands settlers – clearly a fantasy at this point in time – all the Palestinians could hope for is something between the famous “Palestinian Archipelago” map and open-air prison which is now Gaza.

European policy, even in its most engaged moments, is using the conceptual framework of the 80s and 90s to deal with a problem that has gone through considerable changes. More failures are all but inevitable. I seriously doubt whether the European Union is able to enforce its own ban on products from the settlements, but even if it does, it would be like trying to turn a car around by arguing with one of its wheels. The economy of the occupation – for Palestinians and settlers alike – is part of the Israeli economy by now, just as the military justice system in the West Bank is part of the Israeli court system. The argument over a single house here or a neighborhood there has clearly run its course.

The Palestinian problem is a human and civil rights problem disguised as a diplomatic issue. An adequate approach to the occupation would focus on the problem at hand and not the desired solution, which at the moment seems more like a fantasy. The problem is the military control over the lives of millions which has lasted for over half a century, and the absence of political and human rights that comes along with said rule. A Palestinian state is one possible solution to this situation, but it shouldn’t be a policy objective on its own. Treating it like one gives the Israeli leadership an incentive to use the Palestinians as prisoners and their land as a bargaining chip. Israel should face demands that have to do with Palestinian rights – including a just solution to the refugee problem – accompanied by adequate policy measures. Among other things, the result will be a more honest public debate in Israel, and a policy which is more accountable for its long term effects.

Related:
Palestinian President Abbas: The only leader fighting for the Jewish state
Resource: What is the E1 area, and why is it so important? 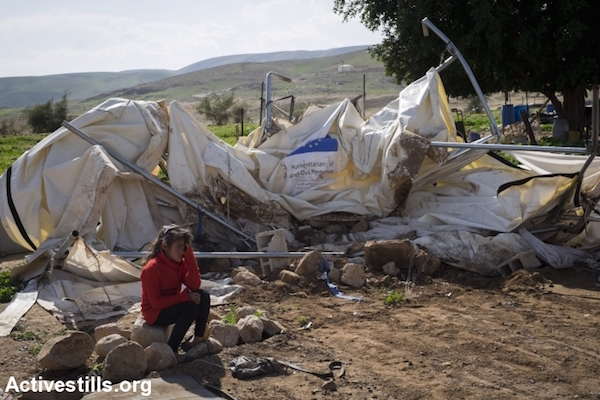 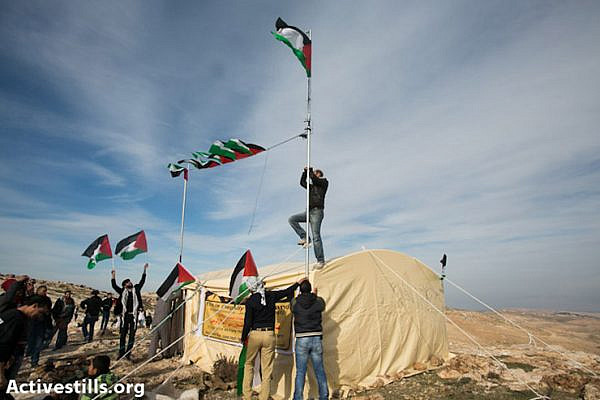 PHOTOS: 48 hours in the West Bank protest village of Bab Al-Shams
For two days on a freezing West Bank hilltop, the Bab Al-Shams village stood as a symbol of Palestinian nonviolent resistance to the planned expansion of settlements that would cut the West Bank into two and deny territorial contiguity to any hypothetical Palestinian state. Photos by: Hamde Abu Rahma, Ahmad Al-Bazz, Anne Paq, Yotam Ronen, and Oren Ziv On…
By Activestills January 14, 2013 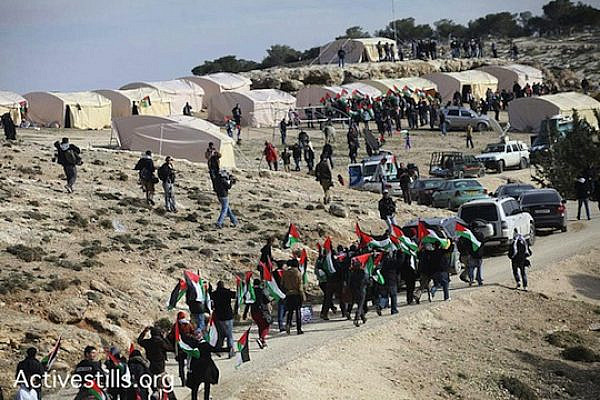 Police brings down Palestinian outpost, activists resist peacefully
UPDATE, 8:30 a.m.: Mass police and army forces evacuated Bab Al-Shams overnight, following a statement made by the prosecuter general stating that the outpost is an immediate threat to the security of the region. Hundreds of soldiers and police detained the dozens of activists present, who resisted the eviction non-violently, and put them on busses…
By Haggai Matar January 12, 2013