The Nakba has a dual meaning today. On one hand, it is about the hundreds of villages that were razed in 1948 and the hundreds of thousands of refugees who lost their homes. On the other hand, Palestinians continue to suffer the Nakba daily – the separation of families, continuous confiscations of land and settlements choking every Palestinian village and town.

Palestinians today mark 64 years since the Nakba (catastrophe). They are not commemorating a historical event that has long passed, or a sad moment in their past. Many of the Palestinian people are living the reality of the Nakba today. The pain of the open wound has not healed.

Sixty-four years after the Nakba, Palestinians still have no state and no equality. Refugee camps still exist all over the world and a majority of Palestinians live in the diaspora. Against their will, the Nakba divided the Palestinian people between Palestine and diaspora, between Gaza and the West Bank, between those who hold a refugee identification card and who don’t.

The Nakba has a dual meaning today. On one hand, it is about the hundreds of villages that were razed in 1948 and the hundreds of thousands of refugees who lost their homes. I remember taking a group to Qubeibeh, a Palestinian village on the outskirts of Hebron. Qubeibeh was destroyed in 1948. On the trip, I asked two Palestinians who lived there before the war to join us. They walked around the destroyed village telling the stories of each house, each family, the gossip of the town, funny and sad anecdotes. The tears streaming down their faces were tears of longing and passion, about loss and love. 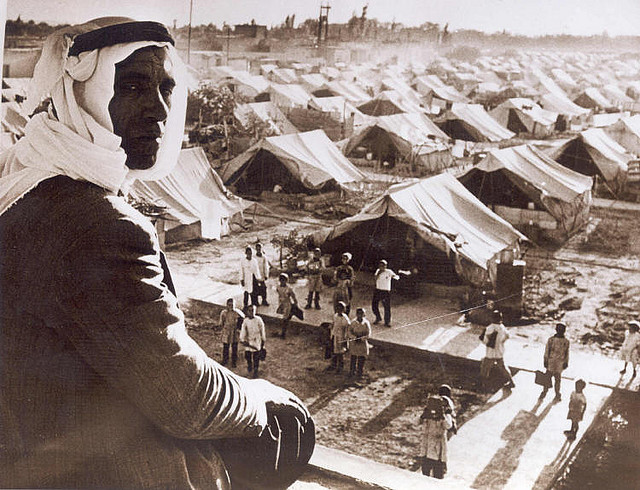 Palestinian school at a refugee camp in 1948 (photo:flickr/gnuckx)

However, this is only one aspect of the Nakba. Palestinians today feel that the Nakba didn’t end in ’48. They suffer the Nakba daily – the separation of families, continuous confiscations of land and the settlements choking every Palestinian village and town.

The Nakba is the present as much as it is the past. To my parents who built their house in Bethany, which is five kilometers outside Jerusalem, the Nakba is as real today as it was 64 years ago. But my parents aren’t allowed to live in their house if they want to keep their Jerusalem ID. They must rent an apartment in Jerusalem. Yet the Ma’aleh Adumim settlement is walking distance from my parent’s home in Bethany. It is perfectly “legal” for Israeli Jews to live there, but not for my parents. Every time my father travels through checkpoints to water the garden he planted and to take care of the empty house – while not being allowed to spend a night there –  he relives the Nakba again. When my aunt, who was born in Jerusalem but lives in Hebron, cannot come and visit us in Jerusalem because she is a “West Banker,” we live the Nakba again.

I understand that it is hard to learn about the narrative of “your enemy” and the suffering of that enemy, especially if it is due to your country’s practices. I remember having to walk this uncomfortable path and learn about the Israeli and Jewish narrative. At first everything in me rejected the idea and refused to sympathize. However, if peace is ever to be realized between the Palestinians and the Israelis, this must happen. Dr. Sami Adwan, Dr. Dan Bar-on and Dr. Eyal Naveh have undertaken the breakthrough work of presenting the two narratives in a joint book published recently, titled “Side by side.” The importance of recognizing the story of the other is crucial to any real peace. This is true for both Israelis and Palestinians.

However, the reality paints a different picture. The Israeli government not only ignores Palestinian history, but is also trying to force Palestinians to forget their own narrative, by forbidding commemoration of the Nakba. Are they so ignorant that they believe a law can strip a person of his identity, memories and passions?  Jews who came to Palestine  boasted about their longing for the “holy land” for thousands of years. How can such people ignore the longing and love of the land of many Palestinians who lived on that land just 64 years ago, many of whom cannot even visit anymore?

The justification I hear about why Israel ignores the Nakba is an interesting one. They claim that Nakba commemoration is about hating Jews. I have heard it over and over again. So, I quote the Palestinian poet Mahmound Darwish, who wrote about the Nakba extensively. When accused of hating Jews he said:

The accusation is that I hate Jews.
It’s not comfortable that they show me as a devil
and an enemy of Israel.
I am not a lover of Israel, of course.
I have no reason to be.But I don’t hate Jews

While Nakba day is about mourning the destruction of historical Palestine and facing a continued unjust reality, it is also about the future. The Palestinians on this day look ahead and try to figure out a way for Nakba Day to become about the past and not the present. We cannot change the past, but we can make tomorrow different. Nakba Day is also about finding a way to bring peace to a people that lived in catastrophe and long for peace, freedom and security.

Read also:
Rightists disrupt Nakba ceremony at Tel Aviv University
Why the inconvenient truths of the Nakba must be recognized
Israel’s n**** word: efforts to teach it, and attempts to erase it