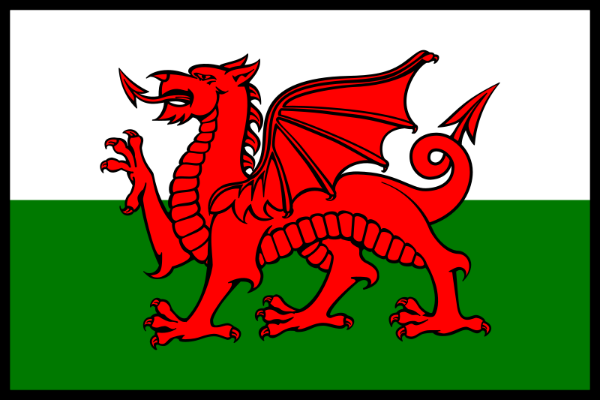 The evocatively colored flag of Wales, which is gradually turning into the flag of a unionized sovereign state.

The first page I ever “liked” on Facebook now proved itself worthwhile. It is the page of British folk singer Billy Bragg, the “Bard of Barking” (an area in East London). Besides being one of the best baladeers ever born, Bragg is a socialist thinker and an activist. It is from him that I learned today of the Welsh referendum, in which the nation voted to give their national assembly direct powers.

Bragg, an Englishman, was certainly excited. He wrote: “Before one of you nay-sayers points out that the turn out was only 35%, I say this: history is made by the people who can be bothered to turn up.” This made me think of the history I’ve seen taking shape in Britain over my life time. When I was a child, two of the “countries” making up the UK were more or less under complete English occupation.

Then, in 1997 the Scottish parliament and Welsh assembly were founded. Power traveled from Whitehall to Cardiff and to Edinburgh. The UK is becoming more and more a union of equal partenrs, and this made me think of us here.

A few months ago, I made a proposal: what if Israel and Palestine were to become two sovereign states, both included within the European Union? That would provide a compromise of sorts between the one-state and two-state solutions to our regional conflict. The idea isn’t so far fetched: the nearest EU member is the next country to the west, Cyprus, which is in itself not quite within Europe and the site of an armed conflict, cmplete with a separation fence.

Nevertheless, since the EU itself shows little interest of accepting us or our neighbors into its ranks, I also proposed putting together a smaller version of such a union, to include only these two states. Now I’m thinking of the British model, not the current, deeply flawed one, of course, but a future model in which England, Scotland and Wales will be equal partners.

So let’s picture such a reality, one of a “united republic”. Jerusalem could be the capital of the union. Ramallah and Tel-Aviv would also be capitals: each of its respective country. Each country would have its currency (as Scotland now does), its flag (as all UK countries do), and its football team to compete in international championships.

Unlike the previous “no-state solution”, which modeled itself after the confederated European Union, this model pictures Isreal/Palestine as a federation. A strong consitution will define the authorities of state governments vs. federal government. Each Citizen will be able to vote for her or his own parliament, as well as for a federal representation.

The advantage of such a solution over cantonization is in the ability of proper states to provide “national determination” the Israelis and Palestinians, an issue of importance to both nations. There will still be a Jewish state, but it will be precisely that: a state within a larger whole.

Such a solution will allow on one hand a certain degree of refugee repatriation, and on the other offer a solution for the settler public. Settlers will be allowed to remain on West Bank land, so long as it adheres to Palestinian state law, and at the same time be protected by the federal government.

I could of course use the United States here rather than the United Kingdom, as an example of a functioning federation, it would also provide tools as far as the status of the DC-style sector to house Jerusalem, but the UK provides a better comparison, if only because the people of its various countries belong to different nations and have been engaged in wars with each other.

Yes, these wars have taken place a long time ago, but resentment still exists in Great Britain and has been known to stir violence, for example in Welsh-speaking, where English-owned properties are periodically burned to protest “colonialism” (I’m not even going into the Irish issues here). Yes, the current climate here in Israel/Palestine makes even dreaming of possible models seem ridiculous, but let’s do anyway.

The transformation of the UK into a Federation is still far from completion. There’s something about taking the cue from a work in progress that seems less idealistic and more realistic. Nothing is perfect and nothing will be, but in the words of the Barking’s bard: “It all amounts to nothing if together we don’t stand / There is power in a Union.”