facebook twitter email link
Hundreds march in Bil’in to commemorate Jawaher Abu Rahmah, the 36-year-old woman who was killed last week in an unarmed demonstration against the separation wall. The former vice president of the European Parliament, Lusia Morgantini and a current Israeli Parliament member Mohammed Barakeh (Hadash) joined the demonstration which was lead by over thirty women’s organizations from the West Bank and Israel. During the protest, demonstrators managed to tear down portions of the barrier. 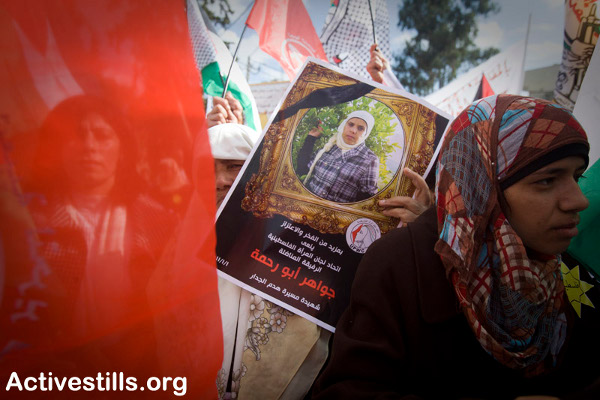 Woman marching in Bil'in this afternoon. Picture Credit: Oren Ziv/Activestills.org
Hundreds of Palestinians, Israelis and internationals marched today in Bil’in to commemorate the killing of Jawaher Abu Rahmah and protest Israel’s separation wall and land annexation in the village.  Jawaher –the 36-year-old sister of Bassam Abu Rahmah, who was killed in 2009 when Israeli soldiers fired a high velocity tear gas canister directly at his chest– was laid to rest in Bil’in last Saturday after dying from complications stemming from tear gas inhalation. Over thirty women’s rights organizations from across the West Bank and Israel mobilized in the demonstration and called for an end to the use of tear gas to crush demonstrations. Before the protest even started, the Israeli military set up ‘flying checkpoints’ at all the entrances to the village. Hundreds of Israeli and international supporters were forced to hike through the hills surrounding the village in order to reach the demonstration. 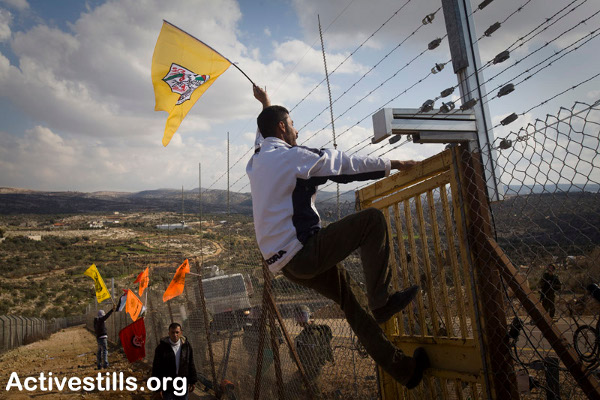 Palestinian man climbs the wall/fence/barrier in Bil'in. Picture Credit: Oren Ziv/Activestills.org
Outrage over the death hung in the air as the demonstration left the center of the village’s square towards the area of the wall. Unlike last week, when the army set up a barricade, hundreds of demonstrators were able to reach the area of the wall and subsequently began chanting and pulling on the fence. Parts of the fence were successfully dismantled by protesters in accordance with the Israeli Supreme Court’s decision that the route of the wall must be moved from Bil’in’s lands.

After thirty minutes, the army opened fire on the demonstrators, among them Israeli parliament members and European diplomats, with a petro-chemical dubbed the ‘skunk’. The foul smelling water was shot directly at demonstrators, press and diplomats. If hit by skunk water, the smell can be on your skin and clothing for up to two weeks. 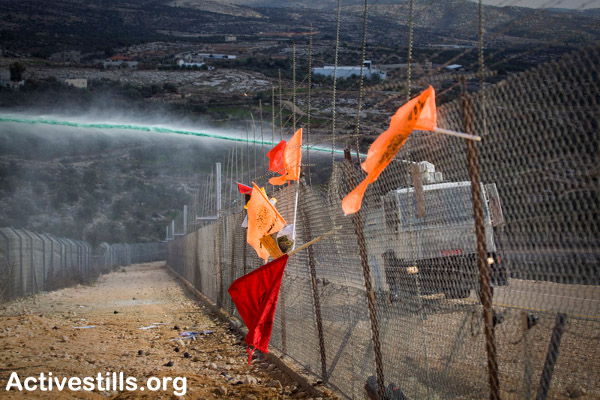 Not content with skunk water, the army resorted to firing tear gas at all corners of the demonstration. Hundreds ran back to the village as wave after wave of the poisonous gas covered Bil’in’s agricultural fields. Clashes erupted between soldiers and village youth as the tear gas continued to fall on the demonstration. Youth managed to throw tear gas canisters back on soldiers as the afternoon deepened and rain clouds appeared on the horizon. The protest was attended by large numbers of international press including film crews from the BBC and Fox News. The protest ended with multiple people being treated fo tear gas inhalation.

Nearly six years have passed since residents of Bil’in, together with their Israeli and international supporters, started regularly demonstrating against the Wall and the confiscation of more than half their land by it. It has been more than three years since the Israeli High Court ruled that the path of the Wall must be changed as soon as possible, and the people of Bil’in have waited long enough.