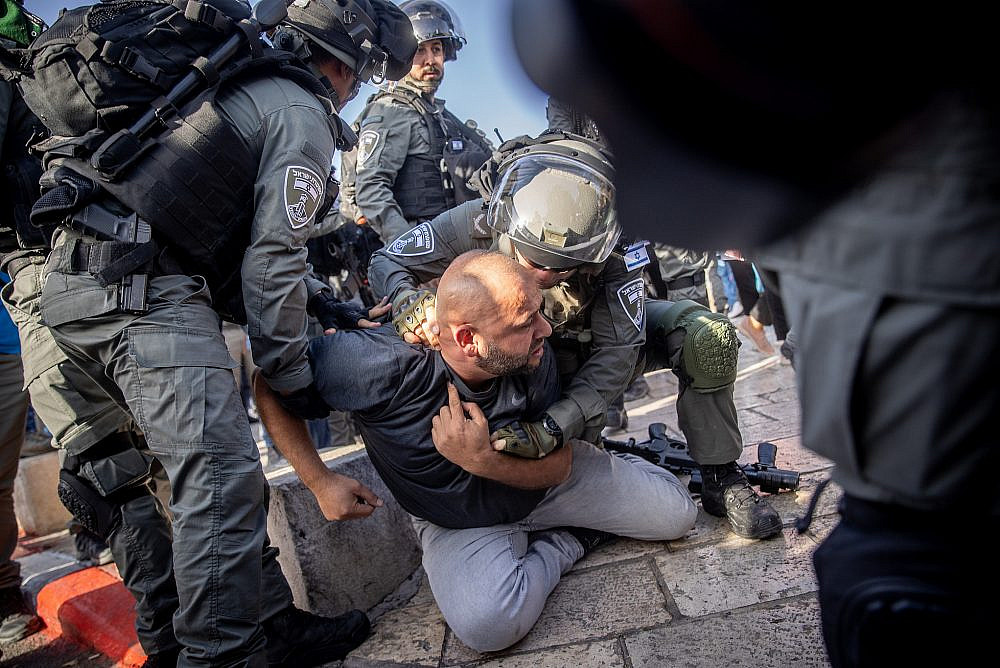 The term “gaslighting” has made a comeback in the public discourse in recent years, and many people, including yours truly, are thankful for this. Once I learned what the word meant, I started noticing gaslighters in my sphere and realized that I should be careful not to let them into my inner circle. It’s just too bad that I can’t keep all the gaslighters away.

Gaslighting describes the practice of making someone question their perception of reality in order to control and abuse them for the perpetrator’s benefit. The term is often talked about in the context of relationships, romantic or other, and usually refers to individual behaviors. But what happens when an entire group acts as gaslighters? Or worse, when an entire society becomes the victim of gaslighting?

Two weeks ago, an Israeli college professor, who is a friend of mine, screened an excerpt from my upcoming film, “Lyd in Exile” (co-directed by Sarah Friedland), to her students. After watching a scene that vividly describes how Zionist forces committed a massacre in one of the town’s mosques in 1948, one of her students, who is a settler from the West Bank, could not handle the testimonies and evidence in the film. Following the screening, the student decided to divert the discussion to the issue of Palestinian children throwing rocks at her settlement, which is located near the city of Nablus.

What the student didn’t mention, of course, was that her settlement was built on stolen private Palestinian land that belongs to the children’s families from a nearby village, who are now sentenced to a life of further poverty and dispossession due the settler’s theft of their parents’ livelihood. Since the truth of that theft does not bode well for her and her like, the student tried to reinterpret reality and portray herself and her fellow settlers as the victims of “stone throwing,” falsely implying that they have done nothing wrong.

This kind of gaslighting has been a persistent experience for the Palestinian people. The recent onslaught on Gaza, the slow ethnic cleansing of Jerusalem, the police and mob attacks on Palestinian citizens of Israel, and the killing (and lynching) of Palestinians in the West Bank by settlers and the occupation army demonstrate the pervasive, abusive mechanisms that Israelis and their establishment have been practicing on all Palestinians for decades. 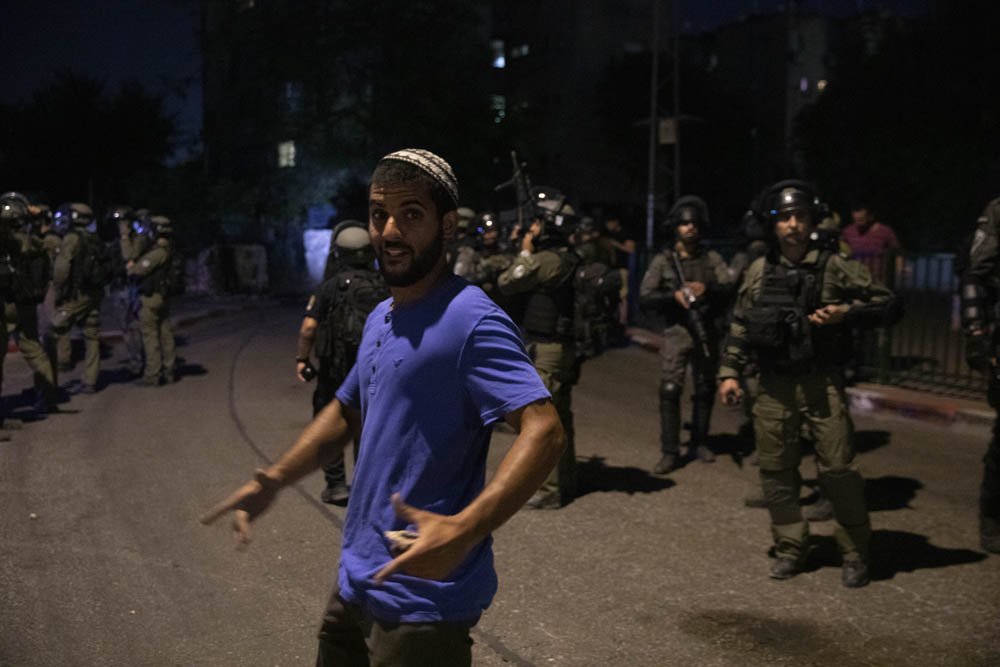 A right-wing Israeli seen standing in front of Israeli Border Police officers during attacks by security forces, rightists, and settlers on Palestinians in the city of Lydd, central Israel, May 13, 2021. (Oren Ziv)

Most Israelis, however, either pretend that this violence does not exist, or that it is justified because of some skewed narrative of victimhood. Israelis choose to ignore the fact that their country was founded on ethnic cleansing, that they themselves are colonial settlers, and that their state continues to perpetrate the Nakba, even at the cost of their own morality. When a society has acquired such leverage, privilege, and power, it is not hard to use it to gaslight another.

Settlers, like those living in the student’s town near Nablus, attack Palestinians in the West Bank and their property on a regular basis. Every day, throngs of settlers set olive groves on fire, damage cars and property, and even attempt murders, sometimes successfully.

Israelis might argue that these are just a few bad apples, and that one shouldn’t deduce from the actions of a rotten few on the nature of the entire Israeli collective. But these are not just a few bad apples — it is a circle of abuse supported, funded, and condoned by the collective. These settlers are backed by the government, their army, and their national police. The armed officers who represent “authority” or “the establishment” don’t just escort the settlers, they often take an active role in the attacks.

To make it worse, these crimes against Palestinians often do not make it to the news in Hebrew. Why would they? It would only uncover what the Israeli public is desperately trying to ignore. How can an entire establishment keep gaslighting Palestinians and the entire world if its own people start questioning their own actions or the actions committed on their behalf?

This is where the Israeli media and education system play a central role in national gaslighting. Unlike Palestinians in the occupied territories, Palestinian citizens of the state go to Israeli schools, work with Jewish Israelis, and consume a large portion of their news from Israeli media outlets. The public discourse they are exposed to is shaped to portray Israelis as the perpetual victims, and uses the collective trauma of the Holocaust to further cement this paranoia of persecution. This mentality further serves as a pillar of Israel’s strategy of automatically accusing any critique of the state as being driven purely by antisemitism. A Palestinian protester surrounded by Israeli soldiers during a protest against Israeli settlement building near the West Bank town of Yatta, near Hebron, March 12, 2021. (Wissam Hashlamon/Flash90)

This habit reached ridiculous levels during the events of May, when almost all Israeli media obsessively spotlighted Arab “riots” and “lynch” attempts as if they were carrying out another “Kristallnacht.” They did so while neglecting to mention that the large sum of attacks were in fact targeted against Palestinian citizens — the minority population — in some cases with the help of Israeli police. Never mind, too, that these reports were being issued by media outlets in a state with nuclear power that has one of the strongest armies on earth.

Tragically, this distortion of reality is a cheap manipulation that some Palestinian citizens of Israel are buying into, even when they know it’s a lie. The fear of going against the Israeli mainstream, or of having their livelihood taken, or of the ramifications of confronting the Jewish majority, are all factors that make Palestinian citizens susceptible to Israeli gaslighting.

Indeed, many Palestinian citizens are still afraid to talk freely about the Nakba — even though our open wound and trauma is backed by historical evidence — because the hegemonic, racist mindset in Israel claims it never happened. We are taught in school that all violence is wrong, yet we see our friends and families attacked in the West Bank and Gaza on a daily basis by Jewish Israeli soldiers, who attend the Israeli public school system and then go to serve in the occupation army. We see Israeli police brutality and feel it on our flesh, yet we are told that the violence inflicted on us is our fault because we “rioted” against the ethnic cleansing of Jerusalem and the shameless murder of children in Gaza.

On the individual level, psychologists would encourage victims of gaslighting to terminate their abusive relationships. But we Palestinian citizens cannot terminate our relationship with Israel, which is only becoming more racist and violent toward Palestinians by the day. We alone cannot stop this, but that does not mean we are doomed to an endless cycle of abuse.

The world is finally starting to wake up and reject these cheap Israeli manipulations. Now, we need governments to stop their support of Israel’s criminal policies, so that we Palestinians will be able to say to our kids in the future that we were once victims of collective gaslighting — but not anymore.