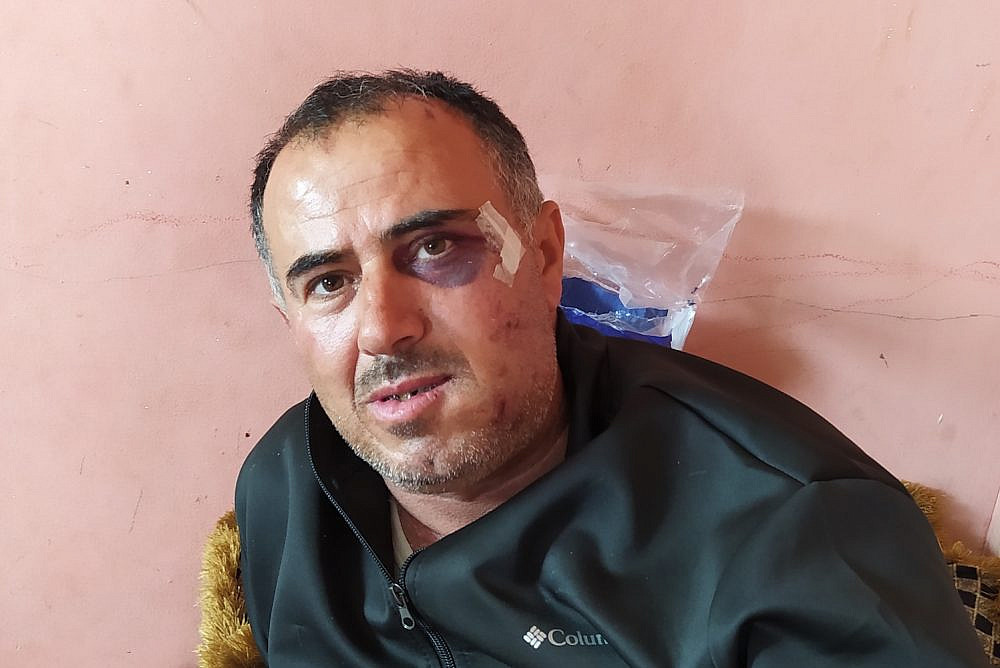 Said Abu Aliyan seen in Hebron's Al-Ahli Hospital after he was attacked by a settler in the South Hebron Hills, West Bank, March 13, 2021. (Guy Butavia)

I spent last Saturday in Hebron’s Al-Ahli Hospital. A wounded Palestinian man lay in the bed across from me, barely able to speak. Said Abu Aliyan, a resident of Umm Lasfa, a village in the South Hebron Hills, has been a mentor of mine for many years. He was awaiting surgery to treat his jaw, which had been broken that morning by a settler wielding a metal pipe.

When I met Said, he spoke in a suffocated near-whisper: “We were on our land. The whole family. My children, my brothers’ children, and my wife. We go there every Saturday, to our land, located near the Mitzpe Yair outpost.”

“Suddenly, a settler showed up,” Said continued. “I know him. As soon as he saw us, he rushed back to his settlement. Everyone in the area knows him. He is always causing trouble by herding his sheep on our land and attacking Palestinian homes, along with other settlers.”

A few minutes later, the settler showed up again with at least 15 more people, Said recalled. “They charged at us with bats, pipes, and rocks. I stood in front of my vehicle, terrified, trying my best to protect my young children who were standing nearby. Some of them ran inside to hide.”

Then, they began attacking Said and his family. “The settlers mercilessly hurled rocks at us from every direction,” Said said. “My kids were screaming. A stone hit my hand and I started to bleed. I barely realized what was happening when a settler grabbed me and bashed my face with a metal pipe, then hit me in the head over and over. I fell to the ground, lost consciousness, and everything went dark. I fainted. I cannot remember anything beyond that point. But this fear, for my children — this horror— it continued.”

As Said recounted the attack, his wife Rima sat beside him, sighing in pain. One of the settlers had struck her with a bat as well. “When the settlers arrived,” she told me, “I froze in fear. But then I remembered that situations like this should be documented. So I quickly pulled out my phone and started filming.” 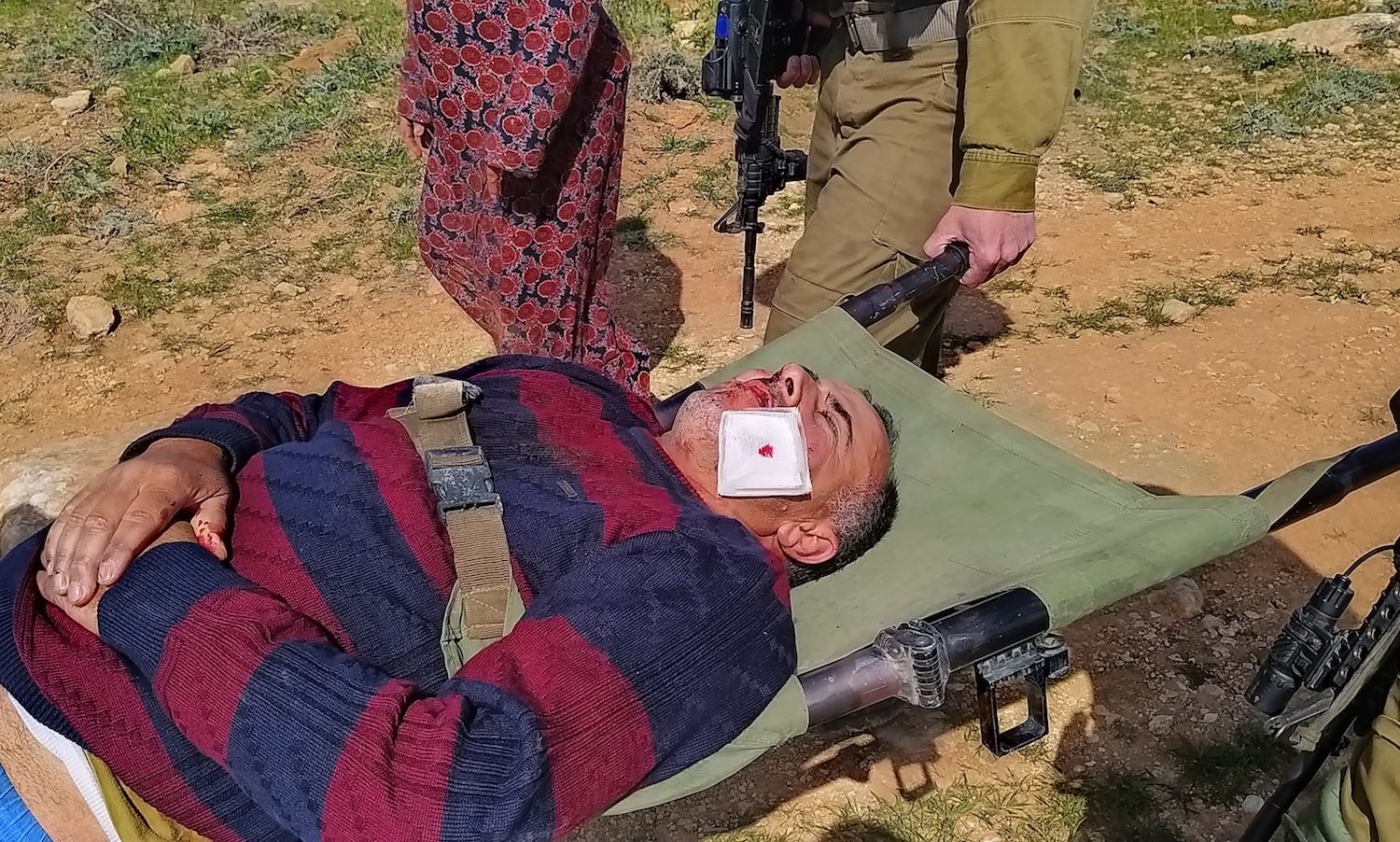 Said Abu Aliyan is carried on a stretcher by Israeli soldiers after he was beaten by a settler in the South Hebron Hills, West Bank, March 13, 2021. (Guy Butavia)

“As I was recording, I tried to protect the children,” Rima continued. “I called out, ‘come to me — come over here!’ The settler then tried to snatch away my phone. They did not want anybody to see their crimes. They did not want anyone to see the fear in my children’s eyes. A settler hit me on my back with a bat. I tried to escape but another settler arrived and tried to grab my phone again. I held on tightly. The settler let go of me and started beating my husband with the same bat.”

It was incredibly difficult to listen to Said and Rima — to listen to the story of a family that had gone out to enjoy a Saturday picnic and drink tea together.

Said called us, the Palestinian activists who regularly document incidents of settler violence and IDF destruction in the area, but I did not arrive in time to film the attack. We left the village of Susiya right away, but the Israeli army had blockaded the road.

Lately, the army has been setting up makeshift checkpoints to prevent us from documenting injustices in the area. That is exactly what they did this time as well, to stop us from reaching the site of the attack. I saw in their eyes and in their behavior that they hate me. They hate all of us because we are always there, recording their every action.

I have witnessed such an attacks before. Already as a young boy, I was exposed to the crimes the settlers have been perpetrating against my family and neighbors. This does not only include beatings: settlers have been uprooting our trees; invading our home; attacking students; running over and poisoning our sheep; and polluting our wells.

To this day, I have yet to see Israeli police arrest a settler, despite the fact that their violence is thoroughly documented. Although Palestinians regularly file complaints with the police, nothing is ever done. Justice is hard to come by in these parts.

And yet, when settlers want Palestinians arrested, the soldiers easily carry out their will — just as they did last week, when a group of young Palestinian children were detained and taken to a police station for picking wild vegetables next to an Israeli outpost.

Sometimes the arrests happen at night during a home invasion. This is what they did to my father last month. He was arrested after a settler filed a baseless complaint alleging he had thrown stones at them. He was released a few days later.

That is the difference between us and them. Palestinians often refrain from filing complaints with Israeli police; of the 1,293 incidents of settler violence in the West Bank between 2005 and 2019 that Israeli human rights organization Yesh Din monitored, 91 percent of cases were closed at the end of an investigation without an indictment. I have no reason to believe Said’s case will end any differently.

The purpose of all this violence is clear to me. The settler, the soldier, and the police officer all share one goal: to make us surrender. To make us give up out of desperation. To make us leave our land so it can be annexed. 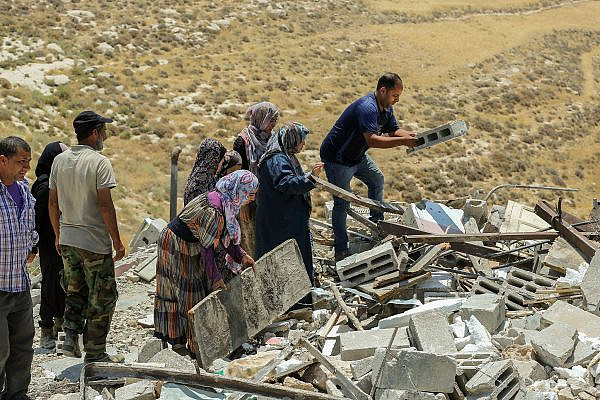 The goal? Judaization. The means? A military exercise in the middle of a village
As the residents of Jinbeh await the High Court to determine their fate, Israel's army decides to hold a large exercise right in the middle of their village.
By Yuval Abraham February 5, 2021