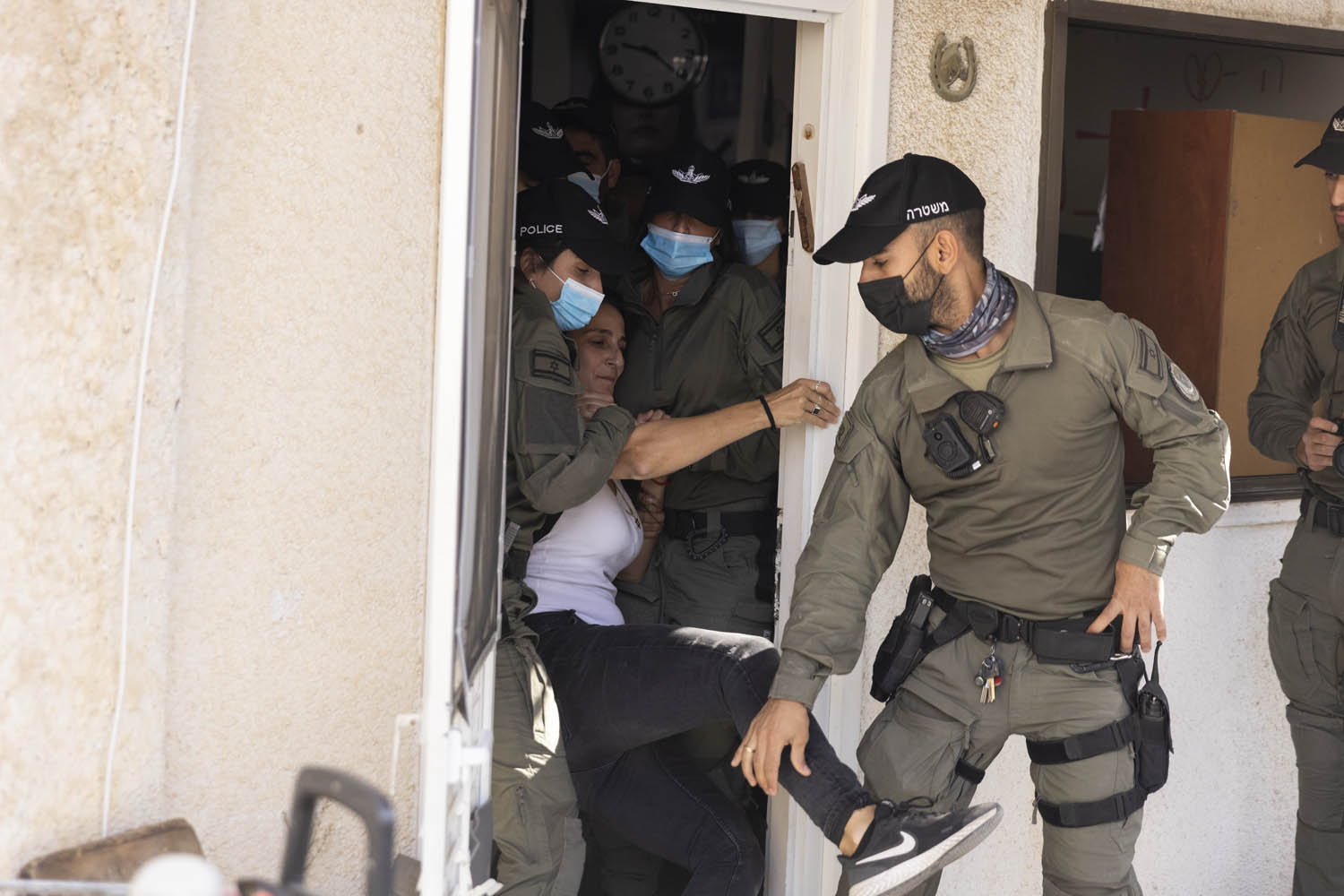 On Monday morning, over 200 police officers and Border Police descended on Givat Amal, a Mizrahi, working-class neighborhood in the predominantly wealthy north Tel Aviv, and began evicting the dozens of families who remained in the area.

A previous wave of evictions in 2014 displaced around 80 families from Givat Amal; some of those who remained left recently, knowing they would eventually be forced out of their homes.

Getting word that the evictions would take place early Monday, activists and supporters had begun arriving in Givat Amal late Sunday night, and had barricaded the houses with furniture and blocking access roads to the neighborhood with cars, garbage bins, and planks of wood. 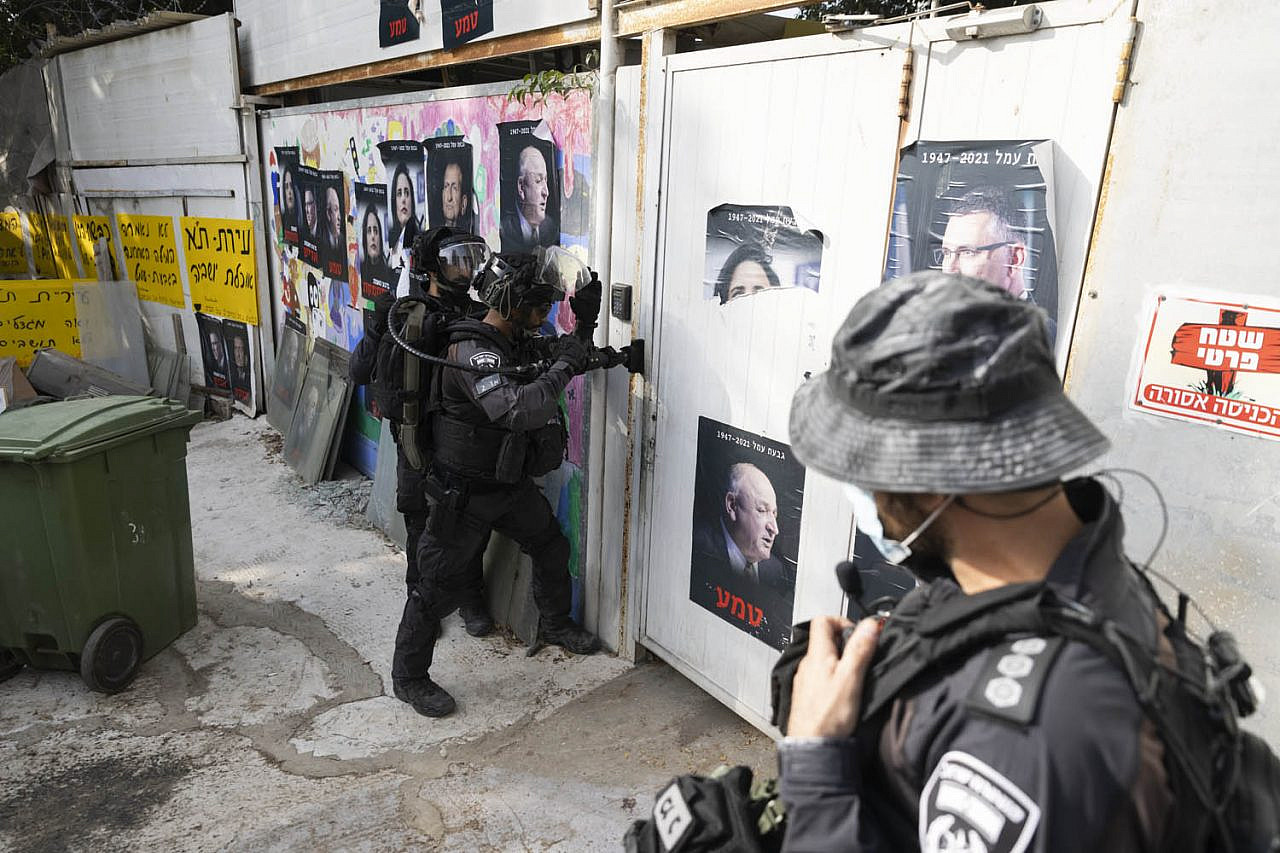 By Monday afternoon, however, only a few solitary residents remained — among them Levana Ratzabi, 75, who declared that she would only leave if carried out on a stretcher. Throughout the day, contractors removed the residents’ belongings from their houses and demolished doors, windows and other structures in homes that had already been emptied of their occupants,  making them uninhabitable and thus preventing anyone from returning to them.

“I am enraged that [the state] has betrayed us,” said Ronit Aldouby, a Givat Amal resident who has been active in the anti-eviction struggle. “Their contempt for Mizrahim is beyond words.”

“All these years not a single tree has been planted here, they didn’t provide any services, and it’s all deliberate,” added Yossi Cohen, another Givat Amal resident. “The [Labor-Zionist] Mapai governments started it, Likud continued it, and now the ‘government of change’ is continuing to betray us. It’s a disgrace upon the state.”

Givat Amal residents shared their distress as they waited for the authorities to arrive on Monday morning.

“I won’t leave my house, I’m not in good health,” said Ratzabi, as she barricaded herself into her home along with several activists prior to the eviction.

“I feel terrible,” Ziona Yehud, 71, said while packing up her house. “I haven’t slept for a few nights, I’m having nightmares. One night I got up and thought the police were arriving. I have trauma from the eviction of 2014.

“It was shocking,” Yehud continued. “I didn’t believe that it would come to that, being evicted without compensation: an apartment for an apartment.”

“My parents arrived here in 1948,” recounted Hani Samuha Levy, whose parents were evicted Monday morning. “Now they’re being thrown into the street at the hands of the state and the municipality. How can the state not produce a plan for the good of the residents that will allow them to buy or rent a house?

“It’s a Mizrahi issue; the kibbutzim get hand-outs,” Levy added. “They could have done that here, too. Where will my parents go? This state is racist.” 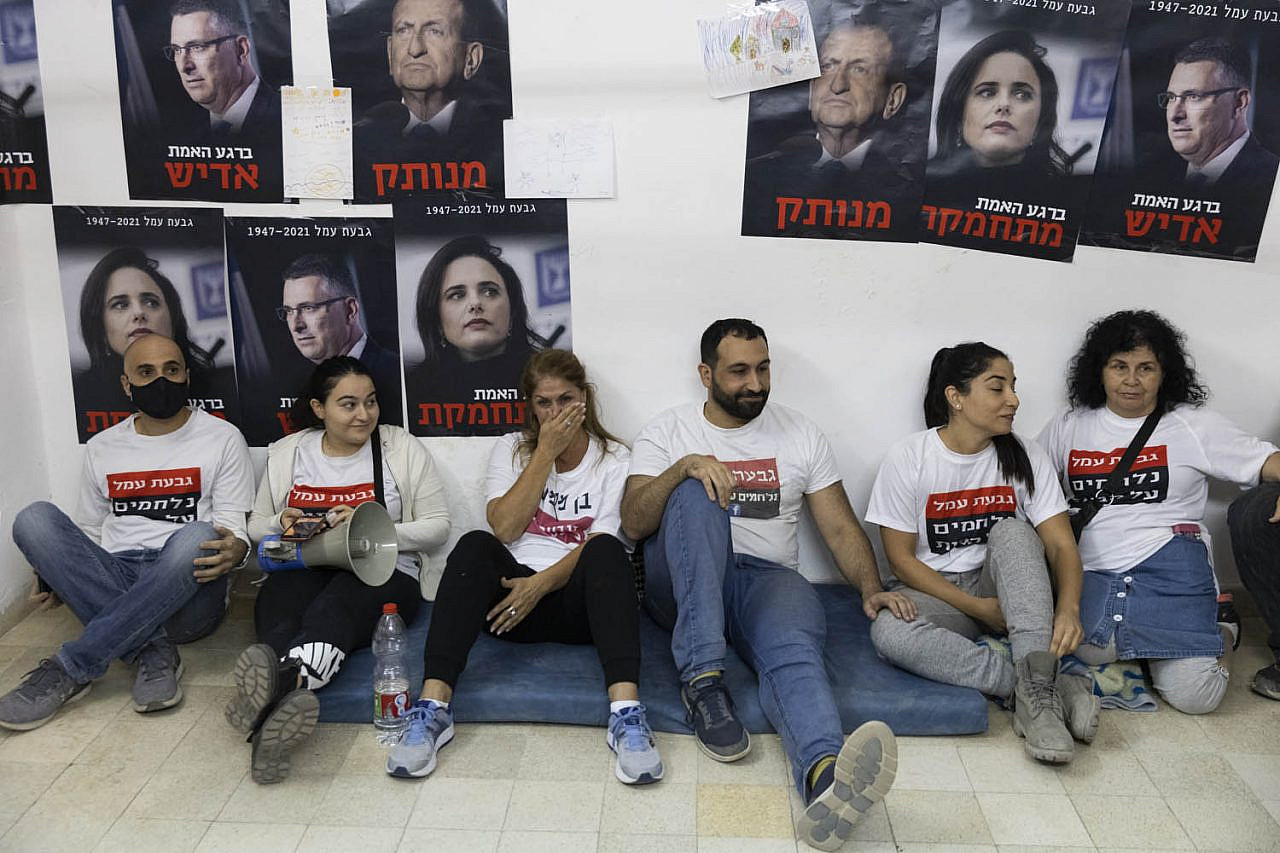 Residents of Givat Amal prior to the final eviction of the neighborhood, Tel Aviv, November 15, 2021. (Oren Ziv/Activestills.org)

“It’s heartbreaking,” said Shula Keshet, a city council member who came to support the residents. “It’s absurd that it’s come to this again, after the previous evictions that happened. They want to evict the families and give billions to the tycoons who will make a profit at the expense of the families, who won’t have anywhere to live.”

On the foundations of al-Jammasin al-Gharbi

Until 1948, what is now Givat Amal was the site of al-Jammasin al-Gharbi, a Palestinian village with a population of around 1,000. Its residents fled during the 1948 war, and Israel prevented the villagers from returning, in violation of UN Resolution 194. In place of the original Palestinian inhabitants, Israel settled some 130 Jewish families in the village immediately following the war, where they have since lived without proper infrastructure.

Over the decades, the state promised to rehouse the residents in new buildings, but the promises were not fulfilled. Over a series of public-to-private sales, the rights to Givat Amal’s land became divided between the Tel Aviv-Jaffa municipality, the real estate tycoon Yitzhak Tshuva, and the Kozahinof family. The municipality issued building permits to Tshuva on the condition that he evict all the residents of Givat Amal from its share of the land, on its behalf. 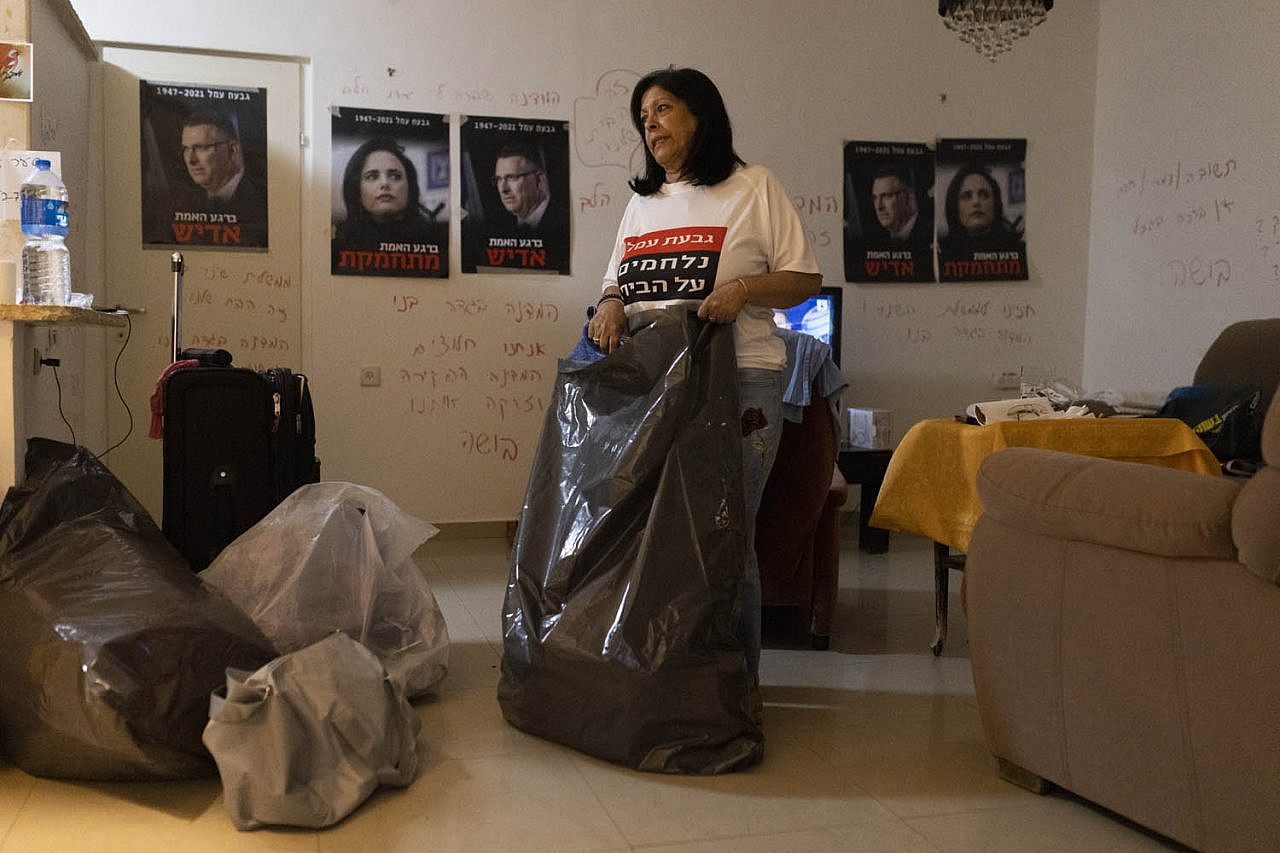 A resident of Givat Amal packs up her belongings ahead of being evicted from her home, Tel Aviv, November 15, 2021. (Oren Ziv/Activestills.org)

After the 2014 evictions, Tshuva filed further eviction requests against the remaining residents of Givat Amal, claiming that they were trespassing, and demanded that they pay a usage fee of NIS 2.5 million per plot.

Despite these rulings, the eviction requests were not rejected outright. Rather, it was determined that each plot in Givat Amal — which had housed an average of three families — is eligible for compensation to the tune of NIS 3 million, an amount that is insufficient for the families to obtain alternative accommodation. The residents filed a request for leave to appeal to the Supreme Court, and in 2020 the request was denied. The verdict thus became final, and the evictions unavoidable.

Last August, the residents signed an agreement for the eviction compensation plan in the office of Justice Minister Gideon Sa’ar. According to the agreement, which was spearheaded by Knesset members Naama Lazimi (Labor) and Gaby Lasky (Meretz), the residents are supposed to receive compensation for the buildings and yards that they owned in 1961, the year in which the state sold Givat Amal’s land to developers from under its residents’ feet. 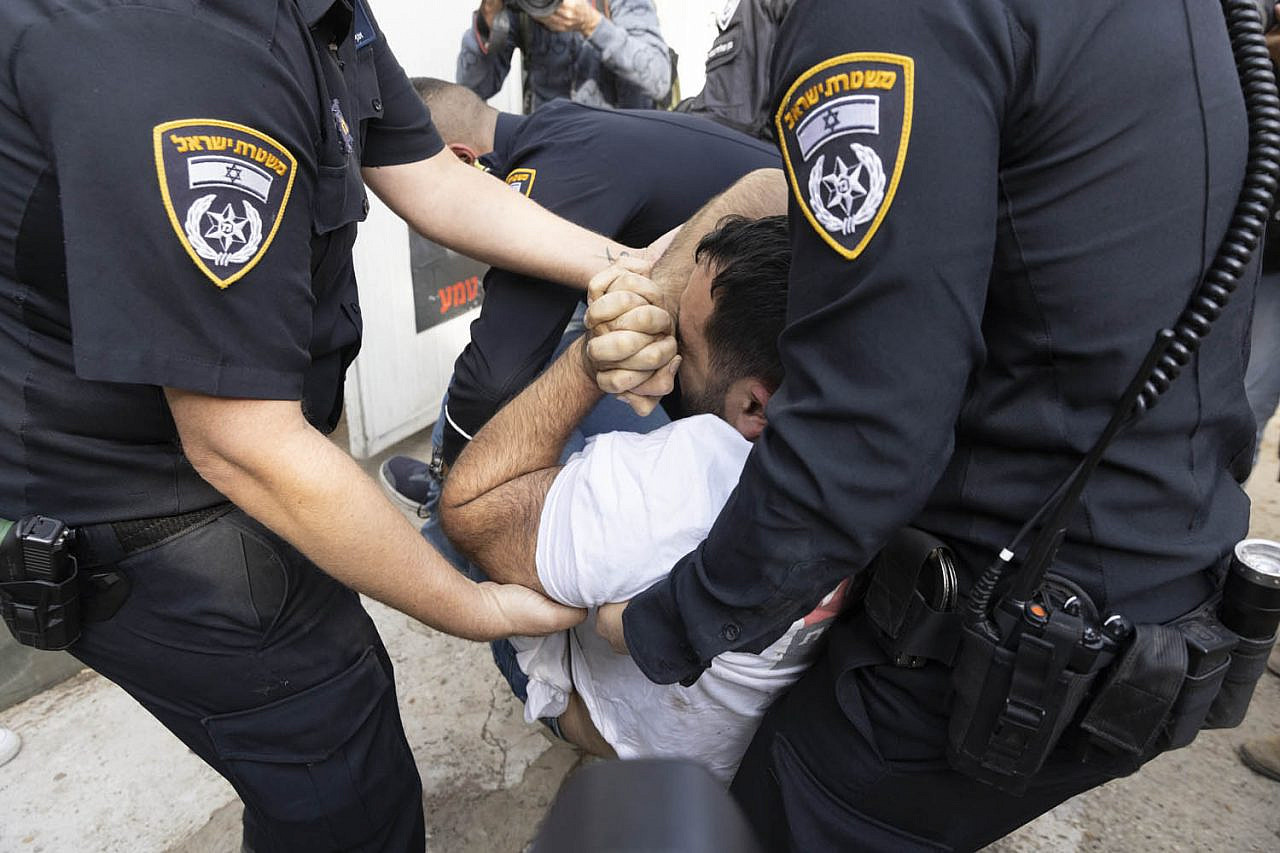 Immediately after signing the plan, the residents appealed to Shaked, who had stood with them over the years, to join the coalition initiative to ensure its implementation, but they received no answer. Despite the compensation plan being budgeted for, the government has not yet formulated the procedure for transferring the funds to the residents. As the plan stalled, Tshuva renewed the eviction requests, leading to Monday’s raid.

“This eviction could and should have been prevented,” Lazimi said. “It’s outrageous…We will not give up until the compensation agreement is fulfilled, but this morning is difficult and disappointing.” Lasky, meanwhile, said the eviction was “the result of callousness,” and vowed to “put an end to the historic injustice done to the residents.”

The last resident of Givat Amal

In a message published before the eviction, Givat Amal’s residents traced a long history of “abuse” and “broken promises from the authorities [that] are about to end in disgrace.” 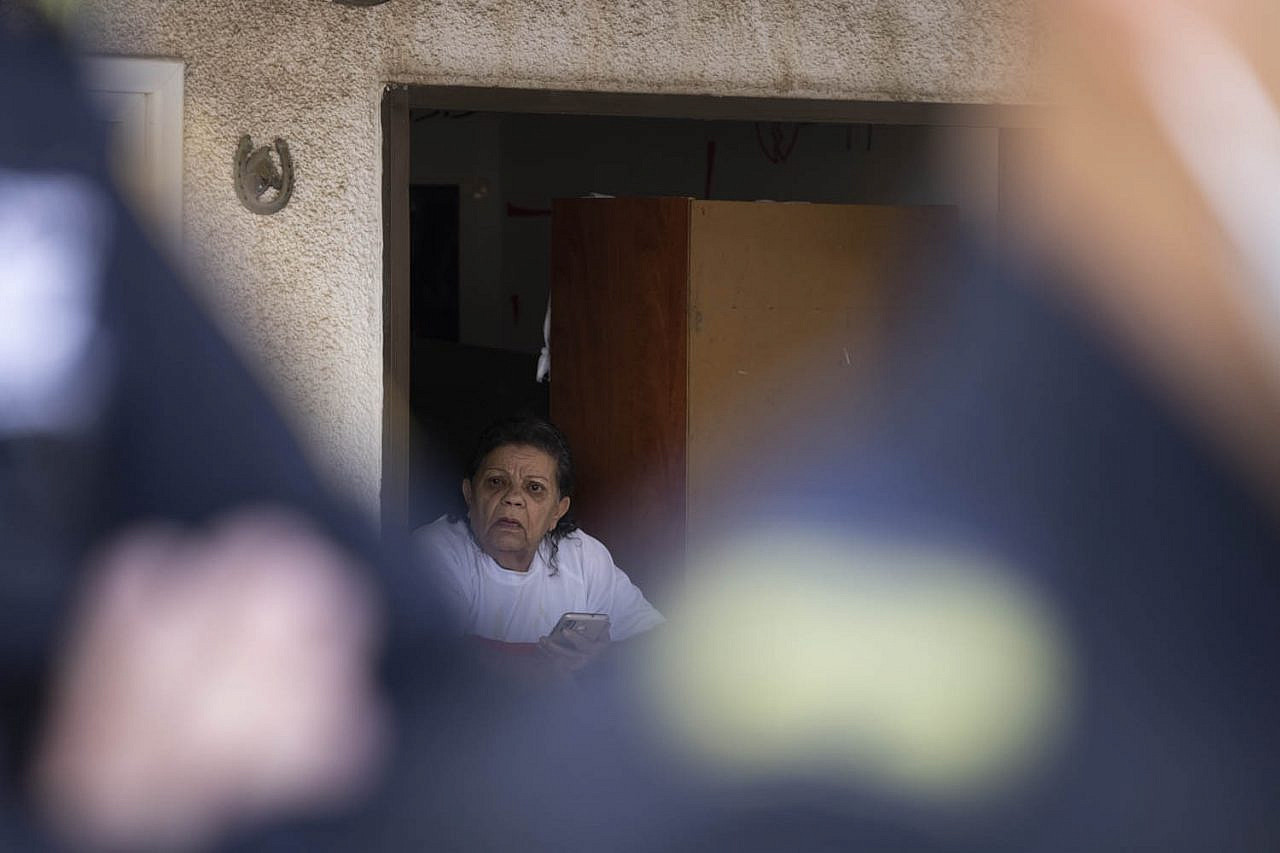 Levana Ratzabi looks out of the window of her home as police evict residents of her neighborhood, Givat Amal, Tel Aviv, November 15, 2021. (Oren Ziv/Activestills.org)

“The compensation exists, but no one cares that the residents will be violently thrown out of their houses and won’t receive [it],” the residents’ message continued. “There is an achievable solution, and only the government’s indifference is preventing it from being realized.”

As sunset approached on Monday, the police finally took away Givat Amal’s last resident — Levana Ratzabi, who earlier in the day had insisted on staying in her home.

“I’ve been here almost 70 years,” Ratzabi said. “But this state is corrupt. I now have no home, and I’m out on the street.”