Most of the people in this land are victims of the Netanyahu government. Partnership between them is the only way to fight its various forms of oppression — including the occupation.

By Nisreen Shehada and Alon-Lee Green 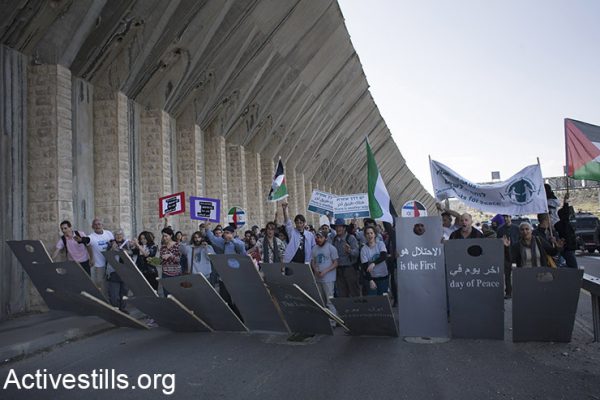 Jewish and Palestinian activists knock down a mock separation wall during a protest against the occupation on the West Bank’s main Jerusalem-Hebron highway, Beit Jala, West Bank, February 5, 2016. (Activestills)

It’s so easy for those in positions of privilege to criticize any action taken by people doing work on the ground as “not radical enough” and to look at the world through a cynical and despondent lens. From that comfortable perch, it’s no wonder that in their recent article, “Let’s stop talking about a false ‘Jewish-Arab partnership,’” Rami Younis and Orly Noy chose not to see real opportunities — and to not believe in change.

We, on the other hand, know that there is hope. We haven’t given up on this place and we haven’t despaired of the people living here. Optimism is a political position.

There are two aspects of Younis and Noy’s article that should be praised. Firstly, even talking about Jewish-Arab partnership, one of the most important political matters to take into consideration these days, is praiseworthy. Secondly, by insisting on separating Arabs and Jews, they unwittingly demonstrate exactly how the right in Israel has maintained its power with its divide-and-conquer strategy and by driving a wedge between Arab and Jewish social struggles.

Their point of departure sidesteps the question of how to achieve change in this land — and who has an interest in achieving it — and is what leads them to the mistaken conclusion that Jewish-Arab partnership is unnecessary.

In the footer of the original Hebrew article, Rami Younis describes himself as a “not nice Arab who believes that Jews need to support Palestinian struggles” and Orly Noy describes herself as “a self-hating Jew who believes that Palestinians must lead their struggles themselves.” Beyond the attempt at humor, the crank bios reveal the pair’s underlying assumptions: the Arab-Palestinians living here have legitimate struggles but Jewish Israelis don’t (and if they do, they aren’t important enough or radical enough). But you can’t push aside the legitimate struggles of underserved neighborhoods and cities, of women, of Mizrahi Jews, of the disabled, public housing, the Ethiopian community, asylum seekers, and others. You can’t write off entire communities and simply declare that they are a part of a “destructive and violent majority.”

What’s more, by erasing all of those communities’ struggles and lumping them in with a “destructive and violent majority,” Younis and Noy are suggesting that the majority of Jewish Israelis vote for the right simply because they are racists trying to protect their privilege. In short, Younis and Noy think that Jewish Israelis are shitty people. We at Standing Together believe that the current right-wing government and the people who live in this land have diametrically opposed interests, and that it is the left’s role to show just how harmful the government’s policies are — and to organize the struggles against those institutions and their policies. 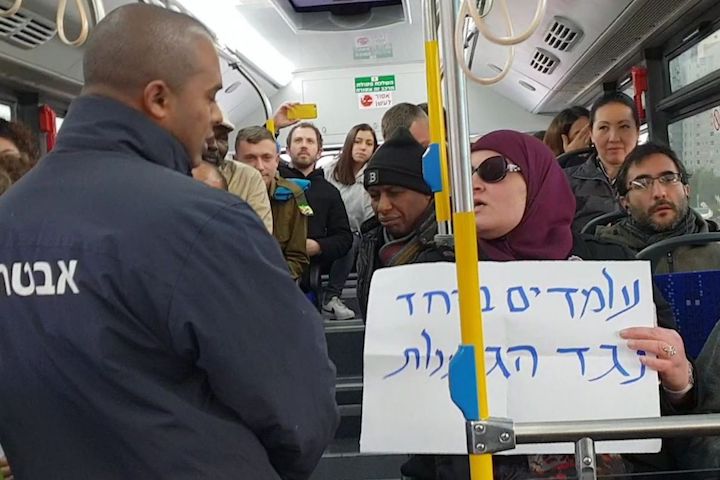 Arab and Jewish Israeli activists from Standing Together carrying out a civil disobedience action protesting racial profiling on buses at the entrance to Barzilai Medical Center, January 20, 2019. (Courtesy of Standing Together)

The right’s economic policies consistently harm workers and weaker population segments, proven at least in part by the series of social protests in Israel over the years. The right’s social policies disregard the views of the majority of the public; this past year alone, those policies led to mass protests over violence against women and LGBTQ rights. The right manages to stay in power not by improving the lives of its voters but by attacking the Arab-Palestinian national minority in Israel. Incitement to racism, among other things, is the right’s way of hiding the fact that it hasn’t improved the lives of those who vote for it.

The way to fight Netanyahu is two-fold: show how his economic policies harm the broader public; and fight both his incitement to racism against Palestinians in Israel and Israel’s continued military control of the Palestinian territories. From Younis and Noy’s writing, it’s safe to assume they believe that the struggles for affordable housing, feminism, workers’ rights, and equality for Palestinians inside Israel are all secondary to the struggle to end the occupation. We think differently.

The majority of the people in this land is harmed by the government’s policies. Jewish-Arab partnership is the way to fight those various forms of oppression, including ending the occupation. Since its founding, we at Standing Together have always believed it is both possible and necessary to work for Israeli-Palestinian peace alongside struggles for social justice and equal civil and national rights. On every front of that struggle we insist on working together on the basis of shared interests. 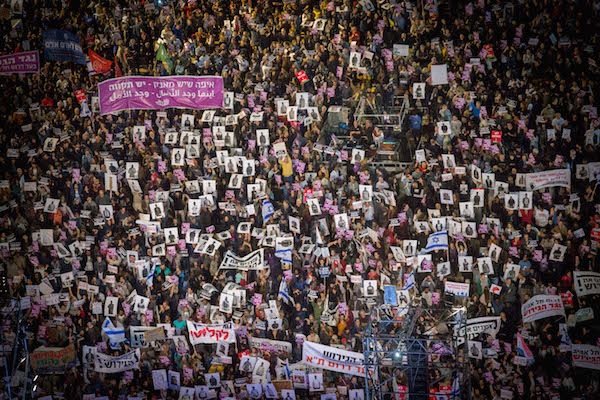 We take that approach with a full appreciation for the fact that different groups in Israeli society suffer from exploitation, discrimination, and oppression in different ways. Arab-Palestinian citizens aren’t just harmed more severely by the right’s socioeconomic policies, they are also discriminated against on the basis of their national identity: racist legislation specifically targets the Arabic language and culture and the legitimacy of Arab political participation. That was articulated most poignantly by the Jewish Nation-State Law, which subverted the principle of equality and legislated Palestinian citizens of Israel into second-class status.

There is no symmetry between the lived realities of Jews and Arabs in Israel. But the right in Israel survives precisely by turning that asymmetry into a barrier for anyone interested in effecting change. It becomes particularly effective when the right systematically stokes the fears of Jewish Israelis, suggesting that Palestinian national and cultural symbols embody a desire to “throw the Jews into the sea.” That is how the right manipulates national Palestinian symbols, particularly the Palestinian flag and Nakba Day.

Notwithstanding the inherent complications and power relations of any Jewish-Arab partnership in a society as segregated and polarized as ours, we believe that such a partnership is the only way to advance an alternative and change our reality. Yes, it is a challenge. It is not easy to achieve equality within a joint political framework, as Noam Sheizaf wrote. But we in Standing Together choose to face those challenges every single day of the week. Sometimes we succeed; sometimes not so much. But we do not give up, we do not give in to despair, and we do not stop trying. 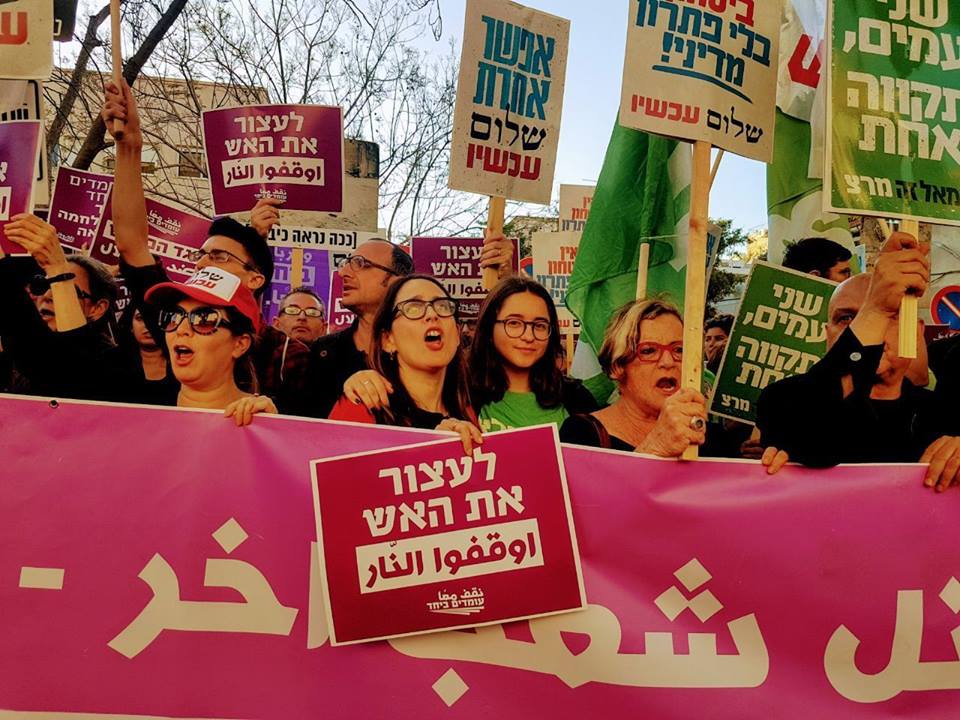 Standing Together activists and members of other left-wing groups protest outside of Likud’s Tel Aviv headquarters after Israeli troops opened fire on unarmed protesters in Gaza, April 1, 2018.

Younis and Noy write in their article that the Arab members of Standing Together don’t really believe in Jewish-Arab partnership — that they only say they do to placate the privileged Jews in their midst. By writing that, they diminish the contributions of the Palestinian members of Standing Together — partners in the movement’s leadership who set its agenda, work to promote the interests of the Arab-Palestinian public in Israel, and who sometimes pay a personal price for their leadership. More tragically, by attacking Standing Together, Younis and Noy only strengthen the right’s argument, according to which those Palestinians who say they want to live peacefully alongside Jewish Israelis are actually lying.

These are our beliefs and we really believe in them. We believe that the right’s policies harm Arab families more than Jewish families and that that harm has historical roots. We also know that Jewish-Arab partnership is the way to fight for the rights of all of those families, Jewish and Arab alike, and to ensure that they all can live together in this land. Those are our values. That is our theory of change. That is the source of our hope. We believe in the path we have chosen and we are building a broad movement — Jewish, Arab, and socialist — to bring about fundamental change in the society, economy, and politics of Israel.

Nisreen Shehada and Alon-Lee Green are members of Standing Together’s leadership. A version of this article first appeared in Hebrew on Local Call. Read it here.